My Take on the Big Yankees Moves

Hey everyone, Drew back here. As the free agency period is starting to slow down and come to a close, Yankee fans seemed to wonder where GM Brian Cashman had been. Normally, Cashman and the Steinbrenner family are all over the free agents every winter, but it seemed different this year. Obviously, the team's weakness from last year was our starting pitching, with struggles from Phil Hughes, Bartolo Colon, and more famously, AJ Burnett. Burnett has been consistently awful through his 3 seasons in the Bronx, and for about $16 million a year, Cashman did the wrong thing taking him on. But you can't necessarily blame him for the signing. Burnett had been a very solid #2 pitcher for several years, and his performance demanded a salary of maybe just a bit less than what he got.

But when I heard about the big trade that went down yesterday between the Yankees and Mariners, I was a bit stunned. In case you haven't heard, the Yankees sent their top prospect Jesus Montero and a potential starter in Hector Noesi to Seattle for their young future star pitcher Michael Pineda and pitching prospect Jose Campos. I was in shock when I received the Yankees News Alert text message, because of the way they brought up Montero. His hitting skill was un-matched by most catching prospects, and his overall future talent was predicted to be of All Star caliber. I invested in a few of his autographs and was extremely excited for his call up to the big leagues. Last September, he made a splash when they finally called him up for his cup of coffee at the end of the season. He hit .328 in 18 games, slugging 4 home runs, and knocking in 28 runs, which in my book is an unreal first month in the big leagues! 2012 will be his official rookie season, now with Seattle, and he may do even better in a less covered team in the Mariners.

Michael Pineda is going to be a beast in the major leagues, from what all of us fans got to witness last year. With very minimal run support, the 6'7 right hander still managed to win 9 games and sported an ERA of 3.74. He collapsed as the year went on, but he showed many signs of promise. I actually had gotten 2 of his autographs through the mail last season, and I owned him at some points of last year's fantasy baseball season. I'm not sure how he'll stack up in New York, with all of the media and pressure that has scared away many other solid players that just couldn't perform in the environment. My take on his collapse last year was that he lost confidence in his ability to help his team win games, because the Mariners offense didn't give him much/if any run support all season. Also, he was only 22 years old, and it's very hard for a young pitcher, no matter how talented, to pitch that well against so many All Star hitters for an entire year. 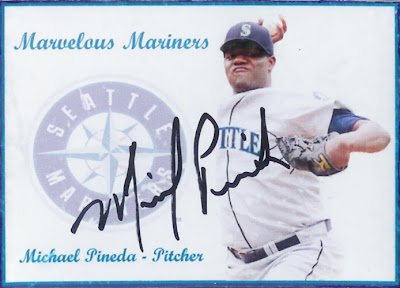 While I am a fan of Pineda, I still don't understand why Cashman decided to deal the future face of our franchise, once Jeter retires. The deal does even out in the end, but after how Yankee fans fell in love with the future hitting star late last year, I couldn't believe he would allow his stint to end. They have wanted many top of the line players over the years, and in order to get those guys, they would have to surrender Montero. In fact, a few years ago they could have gotten Cliff Lee from Seattle, if they gave him up. But Cashman wouldn't do it. Finally, he did it. Hopefully he did it, and got the right guy out of it.

Based off their 2011 performance, Pineda's numbers top most of the other big name pitching free agents' stats. CJ Wilson was pretty much the only pitcher that topped him last year, but Wilson is inconsistent and did very poorly in the playoffs. I'm really going to miss Jesus, and I wish him the best of luck in Seattle.. well as long as Pineda can perform to the ability the Yankees management thinks he can!

Immediately following the trade, the Yankees also announced they had signed former Dodgers pitcher Huroki Kuroda to a one year, $10 million dollar deal. I honestly don't know a whole lot about Kuroda, besides the fact that he's an aging pitcher who had one of his better seasons last year, although he also did not receive much run support from his Dodgers teammates. I think judging off of what I've read he could make a solid number 4 starter, and if he doesn't turn out well, he could be a long man in the bullpen, because they certainly have many other arms to test out in the rotation! The rotation now looks to consist of: Sabathia; Pineda; Nova; Kuroda; and either Hughes; Burnett; or Garcia in the 5th spot. I could see them putting Hughes in the bullpen, because as we've seen, he can be dominant in that role. Burnett may either be traded prior to the season or could fill a bullpen role, as much as he won't like the idea. But honestly, I don't think it matters how happy he is, because he earned the role he now has, by failing to perform at the level his contract wanted him to.

Nobody wins in the offseason, because simply, there aren't any games to play! With the Angels signing Pujols and CJ Wilson, the Marlins signing Jose Reyes; Heath Bell; and Mark Buehrle, and all of the other big moves,  it's been an interesting offseason for sure. I hope a few years from now the Yankees won't regret yesterdays moves, but we're going to have to wait and see!

What are your views on the big moves in the Bronx? Who do you think got the bigger edge in the deal?