Hey guys, Drew back here! Phew, midterms are finally over! I wish I could have brought you the awesome news about the card show earlier, but no, I was stuck in rooms testing for hours and studying all week. Anyways, on Sunday, Dad, Mike, and I went down to White Plains yet again to meet a few players and buy some cards at the "Winter Extravaganza" card show! It was a pretty nasty day outside and there was a big Giants game that night, so it wasn't very packed, which led to quick lines to meet players and more time to browse cards! 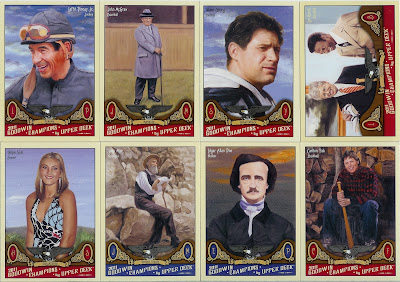 - Steve Young
- Lou Brock
- John McGraw
- Laffit Pincay Jr. (Jockey)
- Carlton Fisk
- Edgar Allan Poe
- John Muir
- Hope Solo (Soccer)
- John L. Sullivan (Boxing)
- Julia Mancuso (Skiing)
Honestly, I'm going to be straight up and say I am not impressed with this product by any means. I didn't mind the 2009 edition with mainly baseball players, but Upper Deck's version of Allen & Ginter doesn't do much for me at all. It does provide a lot of variety if you're a fan of that, but for me, I don't know how much more I'll be getting out of this set.
2011 Topps Pro Debut: (2 Packs) 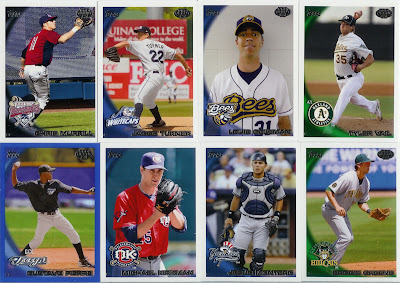 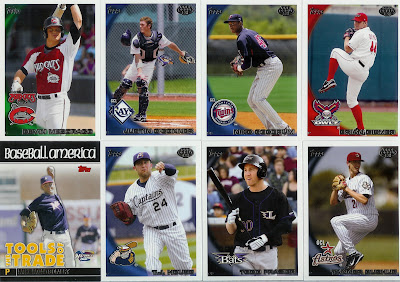 First of all, I get that these cards aren't legitimate rookie cards. In my opinion, a player's true rookie card should be their first Bowman card, but nonetheless, who says they can't have a solid minor league set? I'm all for this set, although I'm not much of a prospector personally. I like the photography and insert/parallel designs, and I think it's a very good set for the market of collectors that enjoy this kind of thing. On a side note, pulling a Jesus Montero card makes me cry on the inside, but hopefully in a few years pulling Michael Pineda cards will make me scream with joy! 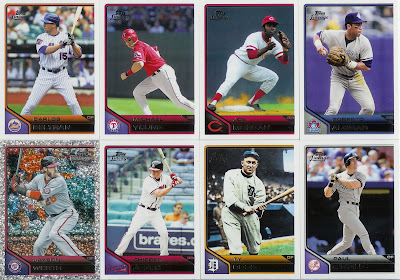 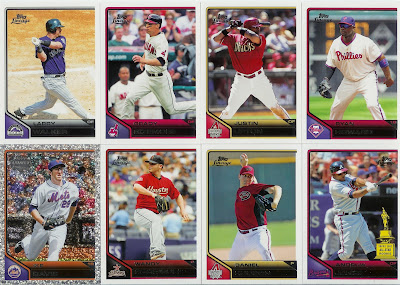 - Larry Walker
- Grady Sizemore
- Justin Upton
- Ryan Howard
- Ike Davis Diamond Parallel
- Wandy Rodriguez
- Daniel Hudson
- Andruw Jones All Star Rookie
I don't really care about this set personally. If it never existed, I wouldn't be crying, but I'm content with it for the most part. The design is nice and clean and would be great for some autos, and I still can't deny to say I love the diamond parallels. The player selection is solid although its the same old, same old from Topps, but it's still cool to pull a card of Ty Cobb and Michael Young in the same pack.
2011 Topps Allen & Ginter: (3 Packs) 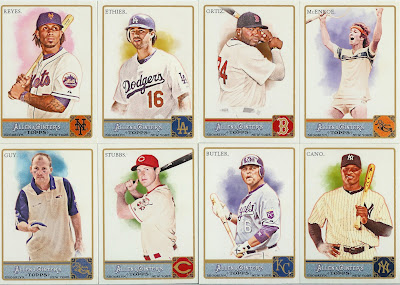 - Prince Fielder Hometown Heroes
- Mike Napoli Hometown Heroes
- Starlin Castro Highlight Sketch
- Gregor Mendel Minds That Made The Future
- Ben Revere RC Mini
- Troy Tulowitzki Mini
- Gharial Animals in Peril Mini
It's always nice to crack open a few packs of Allen & Ginter! Ginter, as well as Masterpieces, was one of my favorite products of the past decade, and no matter how boring some of the inserts can be (Mendel, really?), it's still fun because you never know what you're going to get. We had no clue, but we actually ended up pulling a relic in this pack! Of who? Keep scrolling.. 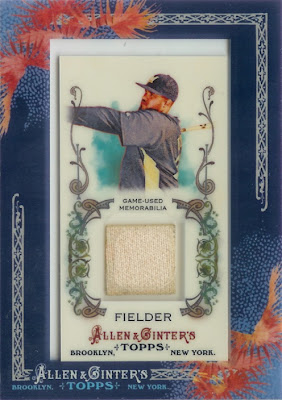 Just the biggest name in sports this week, Prince Fielder! Fielder, the newest Detroit Tiger, is always a good pull. Personally, I like the guy, maybe even more than I like Pujols. I just like how his swing is so strong and powerful and he has a really cool personality. At first glance, I was happy to pull a Prince relic, because he's one of my favorite players outside of the Yankees. Then at second glance, I became even more happy because, the swatch is not a bat but instead, a very dirty jersey piece! It's not often you come across a really dirty relic, especially from Allen & Ginter, so I was really happy with the pull!
Well that will just about wrap up the pack break portion of the recap, so be sure to stay tuned for Part 2, coming soon to a computer right in front of you!
See Ya!
Posted by Drew at 5:16 PM