Hey guys, Drew back here! Now that we're underway with the card show review, I'm just going to let it continue. Check it out!


PART 2: 1961 Topps Pickups
The 1961 Set has been moving quite slow of late for us, but every show Dad and I tend to at least chip away a few cards from the set. We've knocked off a majority of the star player base cards, except for Bob Gibson, Carl Yastrzemski, Sandy Koufax, and Roberto Clemente, however there is still a long way to go until the set is be anywhere close to complete! I officially announced that I was collecting the set last spring, so within the year, to be able to track down 1/3 of the set is not bad at all! Anyways, let's get to the new additions to the set: 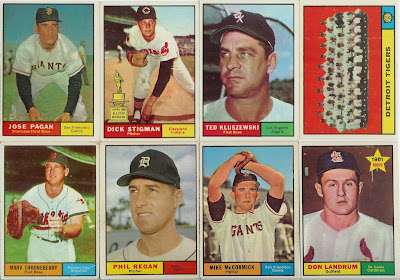 Some may consider this set extremely boring, but honestly I think there's something about them that I really like. It's a very classy set, and while it doesn't contain the flare and fantastic design that many modern sets have, I still value the photo more than anything else. There are some classic shots in this set for sure. My favorite of the 8 above cards is definitely Ted Kluszewski, who was known for being the muscular home run hitting guy who cut his sleeves off on his jersey. Unfortunately, while the card is nice, it doesn't show his hot abs! 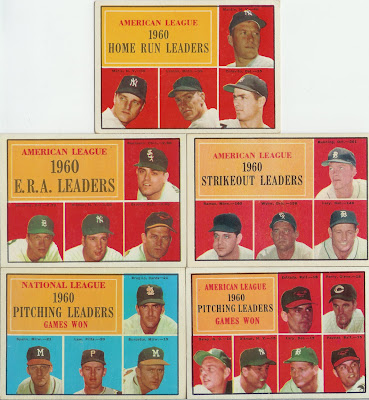 Next up are all of the remaining League Leaders cards I needed for the whole set! Honestly, I think these cards are the ugliest part of the set, but that's just my opinion. Of course, there is nothing ugly about the top card, featuring Mantle and Maris! Anyways, there are some solid players displayed on these cards without a doubt, but I'm not a big fan of the overall design. Still, they are part of the set, which means I'm obligated to obtain them. I'm glad to have them all out of the way! 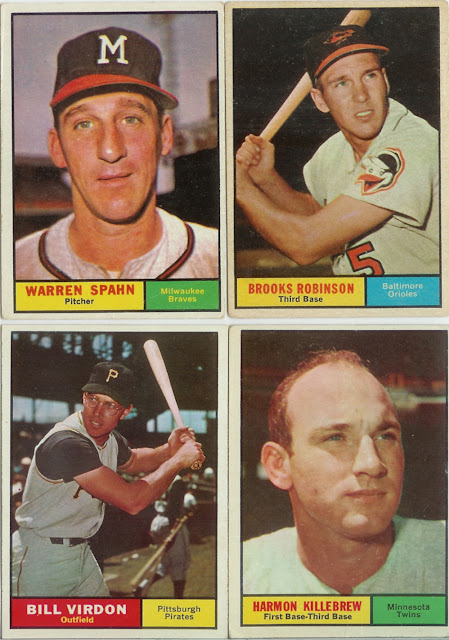 In my opinion, the top pickups (besides the Mantle/Maris leaders card) were of these 4 players: Warren Spahn, Brooks Robinson, Bill Virdon, and Harmon Killebrew. While clearly Virdon may not fit with the other 3 Hall of Famers, I like him a lot and it's a nice card. I got him through the mail a while back and he also was a Yankee manager so I'm a fan for sure. Besides Virdon, I've been really meaning to add Brooks' card for a while now. Not only do I think it's one of the nicest cards in the set, but I knocked off a majority of the first 50 cards, and he was the biggest card I needed to get. Also, Dad originally bought a Richie Ashburn but then realized we had it, went back and exchanged it for the Warren Spahn you see above. I didn't have much in Spahn, so I'm glad he was able to get that one! Lastly, the late Harmon Killebrew's card is pretty nice as well, showing him while his hair was still a full strawberry blonde/brownish color.
So, that will do it for the 1961 portion of my card show gatherings! Thanks a lot Dad for all of the help as always! You're the best! If anyone has any 1961 Topps cards you wouldn't mind trading, please take a look at my list of what I have under the first headline of the sidebar! Thanks guys!
See Ya!
Posted by Drew at 8:00 AM