Hey guys, Drew back here. A few days ago, I received my 36th Through the Mail success! And, this is the final one I will receive in 2010, unfortunately. But, it was a nice one! 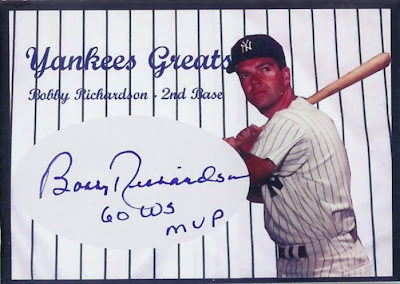 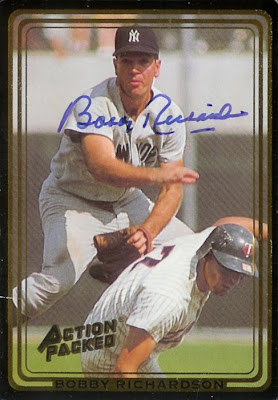 Yankees former All Star second baseman Bobby Richardson signed 2 cards for me, one being my custom! "Bobby Richardson was the best .260 hitter to ever play the game," said by manager Casey Stengel. Richardson was elected to 8 All Star Games, and won 5 Gold Glove awards in his 12 seasons. He won 3 World Series Championships with the Yankees, and he won the 1960 World Series MVP, although the Yankees didn't even win it that year. The greatest part about Bobby was that he played his entire career with the Yankees. I like him!

He took a few months if I can remember correctly, I sent this in August some time, but better late than never! Both cards look fantastic, and the 1960 WS MVP inscription on the custom looks it look even more beautiful. I'll definitely be on the lookout for this guys cards, as I always seem to do with players I've gotten through the mail.