Hey guys, Drew back here. Yesterday I got a mini package from "Tristar", which apparently is Topps' undercover corporation that produces redemptions, missing hits, NPNs, and damaged cards. I got this red hot rookie redemption in my jumbo box of 2010 Topps Series 2, which was for the 3rd card in the set. This card happened to be... 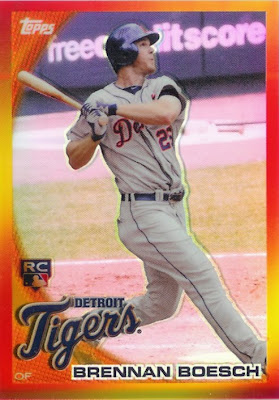 of Tigers rookie outfielder Brennan Boesch. I had Brennan on my fantasy team for a majority of last season and I was really impressed, even though his stats went down as the season progressed. Overall he hit a poor .256, but he had a monster May and June, batting in the upper .330's and hitting 11 home runs. For a rookie, I was extremely impressed, and I hope he's not a one year wonder!

The card looks fantastic, better than any of the past Red Hot Rookie cards. This year they actually added a refractor touch, and the chrome cards also don't have a bend to them! I was extremely impressed when I opened this package, and I probably will keep this!

Did you get your redemption? What did you think?