Tour of my Cardboard Temple

Hey guys, Drew back here. It's very hard to climb out of a hole when you don't have anything to write about, so when all else fails, show off your card cave or whatever you may call it. Here is a photo tour of mine: 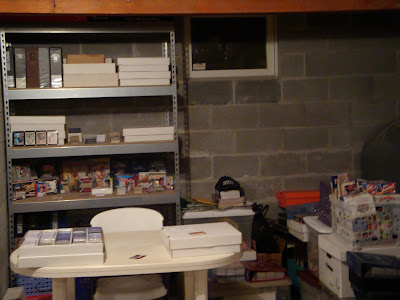 Here's the best view of the whole area. My mom let me use this awesome shelf rack, and I use every level except the bottom which is used for a huge tub of cheapie toys I played with as a kid. I have a horrible "desk" (really a table thats at least 15-20 years old), and I put a few boxes on it. The box on the left is my Yankees box, every card being of a Yankee. On the right is my Hall of Fame player box, with all cards of Hall of Fames not in pinstripes. 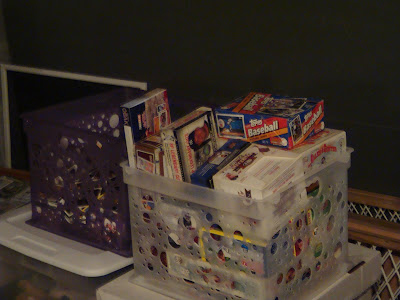 To the far right are 2 crates, under them a bunch more toys and stuff, but in the right box u can tell what it is in it, and in the left crate is a bunch of base doubles and stuff. 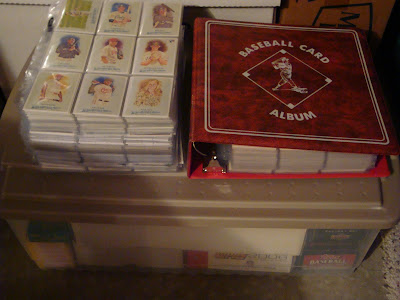 Right below the crates is a stack of binder pages of some sets I don't have binders for yet, and a binder of 1992 Topps that isn't complete but a pain to organize since I probably have at least 10 sets of it lol. Under those is a tub full of complete sets and stuff. 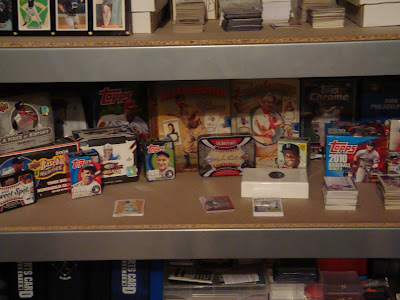 The row you immediately see on my shelf is the display row filled with boxes and stuff. Most of those were opened by me, except the Topps Sterling box, which contains my 1956 Topps Yankees team card in it. I have a few stacks there of just stuff I need to put away and stuff like that. 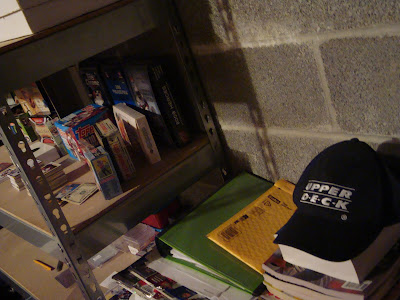 Here's a side view of the display area. To the right is my bubble mailer stack (yep, only 1), and some Becketts under my sick Upper Deck hat. Still have no idea how I got that hat. 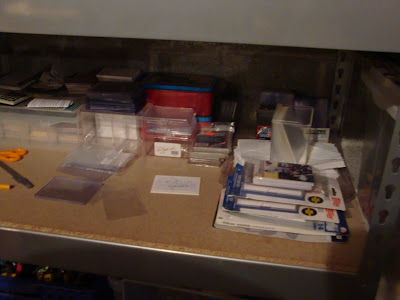 Under the display row is all my supplies, some team sets, and that's basically it. 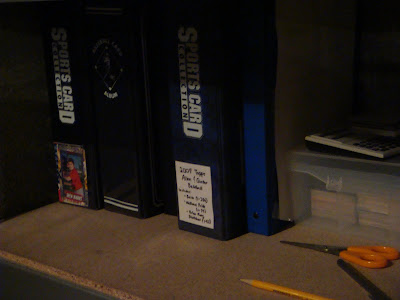 And at the left end of the row are 4 binders, baseball rookies, a few sets, football rookies, and serial numbered cards. See how organized I am? 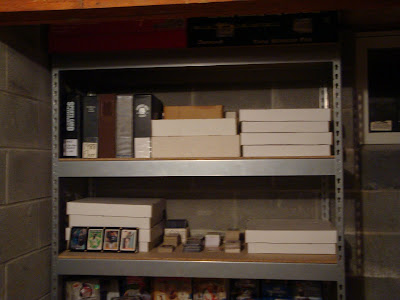 Above the display row is the boxes full of base rows, and some stacks in the middle of the bottom of the two rows. There's my nice little Core 4 piece that I made with all four's rookie cards, and right above it, that box is all non Yankees hits. A lot of sweet stuff is in there. 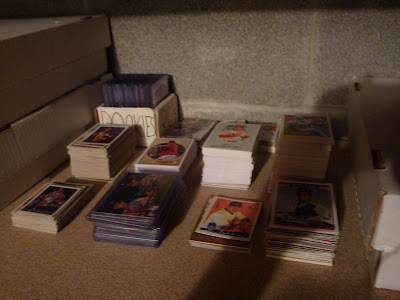 Here is a closer look at the stacks, nothing interesting, really just some for trade cards, and a little spot filled with good rookie cards! Including STRASBURG! (bam, more views right there) 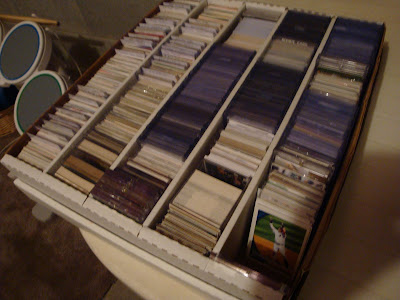 Here's another look at the Yankees box. The first 2 rows from the left are mostly all base sorted in alphabetical order, with some special spots for specific players. The 3rd row has some Yankee Stadium Legacies at the beginning and then all hits the rest of the row. The fourth row is rookies, serial numbered stuff, 2010 cards, and just some other stuff, and the 5th and final row has all my Cano and Swisher cards.

What do you think? I try to keep it as organized as possible, and I try really hard to get it all displayed nicely. I hang my 8x10 pics up in my room, so maybe sometime I'll have to show you my room!

Labels: drewscards, Live from Basement, My Collection, My Man Cave, Tour of Basement