Strasburg Auto- What Should I Do? 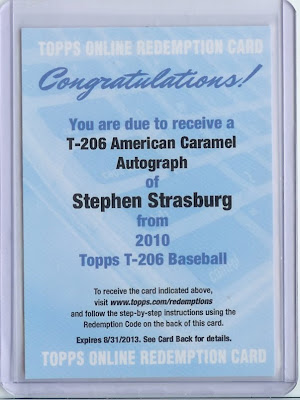 Hey guys, Drew back here. I spent much of last week thinking about what I should do with my recent crown jewel of my collection, a redemption for an autograph of pitching phenom Stephen Strasburg, a card that typically sells for between $200-300 as of right now. I ended up redeeming the card a few days ago, and now I'm starting to think twice.

I explained on the post in which I revealed the pull that since I got the box for free, I would feel like I would be taking advantage of my grandma to sell the card and make a profit for my own good. I also said that it's for my own good that I don't sell it because most likely I'd end up buying things that maybe I wanted more, but nothing that could touch the value of this card right now.

But now, my thoughts have kind of shifted. I'm a big fan of Stephen Strasburg's. I think the hype that he has/had been getting over the past year or so is fantastic for collectors. We now have that element of which we could be happy just pulling a standard rookie card of a guy like Strasburg, Bryce Harper, Jason Heyward, those kinds of star rookies. Before the mania began, we hoped for the ever so boring white and gray jersey swatches and sticker autographs of no name middle infielders for the Arizona Diamondbacks, and when we didn't get enough of that, we would complain and complain to Topps and Upper Deck in disappointment.

This has also been a bad thing for our hobby. Prices have soared on boxes, and the value of the dollar has steadily decreased in our hobby. People are unloading hundreds, even thousands of dollars, or waiting in an enormous line, just to get their hands on a card of this big name pitching prospect. This is almost as crazy as Beatlemania!

But now- this kid is injured. This kid undergoes a major operation on his shoulder, just because of a minor mechanics problem that has put him in danger for the rest of his career. Perhaps throwing 100 mph is harder than it looks! 1 Tommy John Surgery later, and now those same very collectors that dropped thousands of dollars on his Bowman rookie autographs and superfractor, are looking like the bad investors. Now people will be more afraid when the next big prospect comes up, perhaps when Bryce Harper has his first Bowman autograph as early as next year.

Getting back to the card, I've been having nightmares, of me keeping this card, and even though I didn't blow hundreds of dollars on it, seeing it in the bargain bin and then regretting my decision to hang on to it. But I already redeemed the card, so no matter what I can't sell the card right now, just the used redemption, which wouldn't sell for a buck on eBay most likely. I would never just let this card leave my collection if there wasn't a purpose for that, which is why I have a substitution that maybe I could get in an "exchange" for the Strasburg autograph. And that would of course be, an autograph of Albert Pujols.

This guy's scribble is much more valuable to a baseball fan like me, then an autograph of a pitching prospect that you'd have to gamble on. People are telling me that Strasburg's autographs will never go for a higher amount then right now. Now is the time to sell, all that stuff. The collector in me wants to keep the Strasburg, the fan in me wants a Pujols instead. This is my golden opportunity to get an autograph for no cost most likely, of the player with the best chance at breaking Hank Aaron's true home run record. (Barry Bonds will never be #1 on my list)

No matter what, I have no choice now but to wait for the autograph to arrive. It's not like I don't want the Strasburg, it's just that I might be able to do something better, invest in someone more worth it, with the amount of $ Mr. $trasburg is selling for. If I was to do this, I would have to wait for the right time to sell the autograph, which most likely would be weeks before his next pitching appearance, which could even be in 2012.

So, do any of you have advice for me in this situation? I really need advice on this, because I seem to be the only one that is agreeing with myself about this other than Grandpa Roy. Thanks for the help in advance, because I know I'll get some advice here from you guys. You're the best!