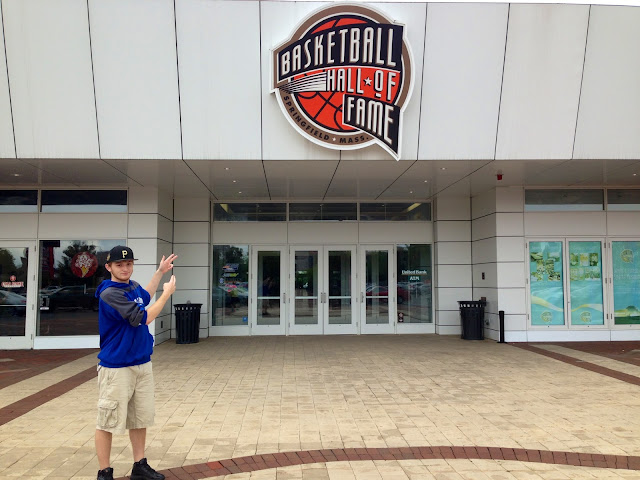 Hey guys, Drew back here! A couple weeks ago, my family went on a trip to Massachusetts to check out a few colleges. It's getting to be that time where college is a big mark on my radar, and I'm now looking at 5 schools I'm planning on applying to! At the moment, my interest lies in the Sport Management field, and my goal is to work for ESPN or MLB or something similar. Anyway, 2 of the schools we visited happened to be really closeby to the Naismith Memorial Basketball Hall of Fame! I convinced my parents to check it out, and we ended up doing just that.

The top floor was definitely neat. The building is a round shape, obviously resembling a basketball, and the inductees all have photos hanging on the wall that wraps all the way around. I'm not going to lie, it seemed a little subpar compared to the Baseball Hall of Fame I saw just prior to this, but it definitely looked really cool. 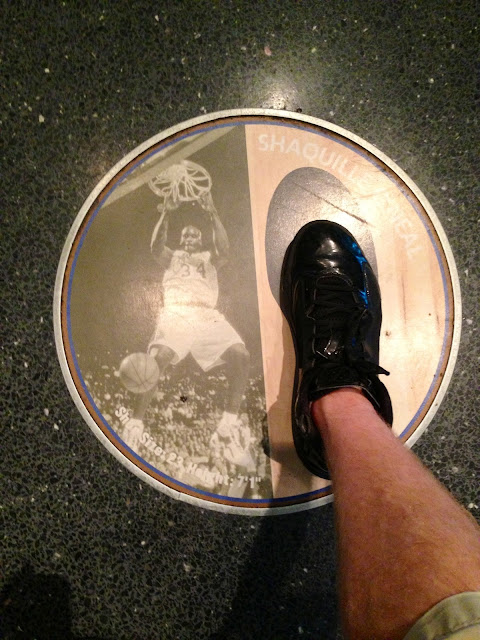 The main floor was filled with these little spots in which you could compare your foot size to some of the NBA's greats. This is my size 12 shoe inside Shaq's 23! I've got quite a lot of catching up to do. 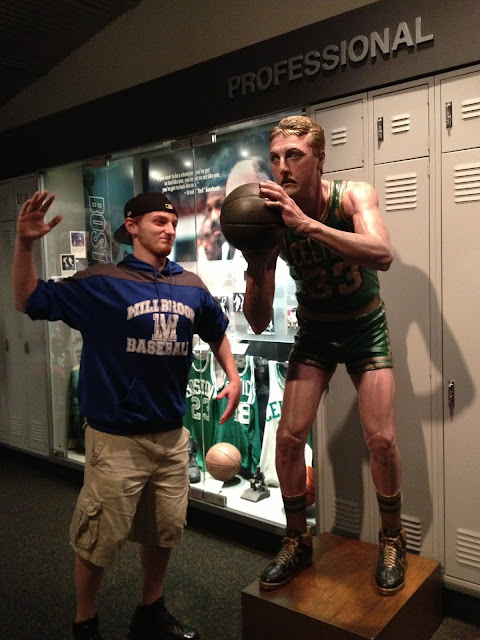 With the Hall being closer to Boston than any other major sports town, Larry Bird has a central figure at the Hall. I made sure to benefit my Knicks by swatting the ball out of Bird's hands. 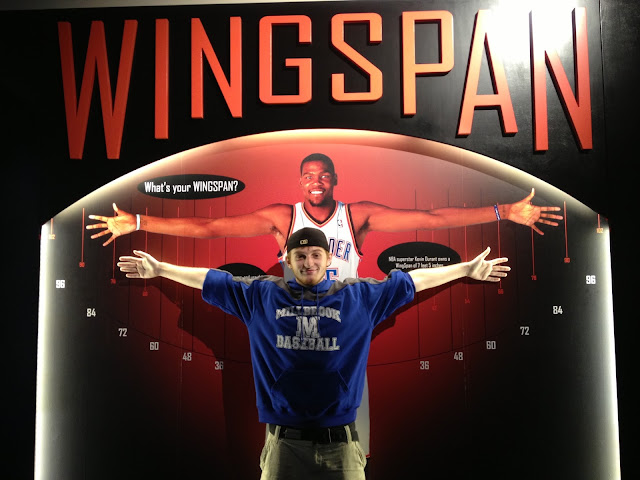 The museum did beat the Baseball Hall of Fame's in its numerous interactive experiences. Here you can see my wingspan compared to current great Kevin Durant's! There were displays where you could test your jump, places where you could relive famous basketball moments by broadcasting them yourself, and the entire first floor was a court that showed the evolution of basketball over time. It was definitely more child friendly than the Baseball HOF. 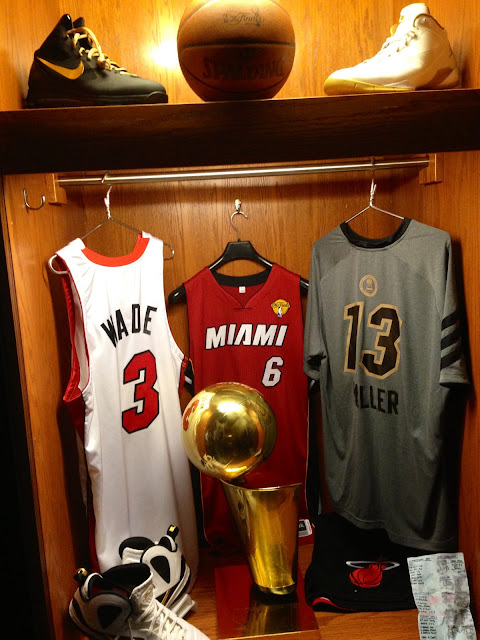 Of course, they did incorporate some of the typical exhibits you would normally see at a place of this kind. Here is the display of the Miami Heat's 2012-13 title run, which includes the legendary Larry O'Brien trophy! 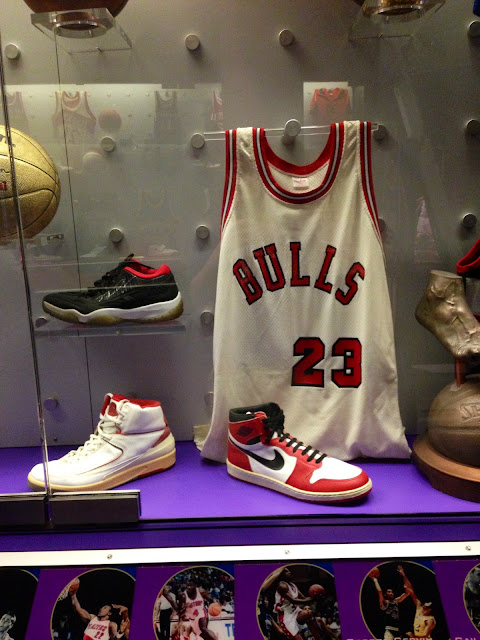 You can't have a Basketball Hall of Fame without the G.O.A.T., Michael Jordan! Many of Jordan's legendary moments were captured throughout the museum, including many of his retro Jordan shoes that have current high schoolers oogling all over. I don't see the "let's spend $400 on a pair of kicks" thing myself, but I would wear them if they were cheaper! 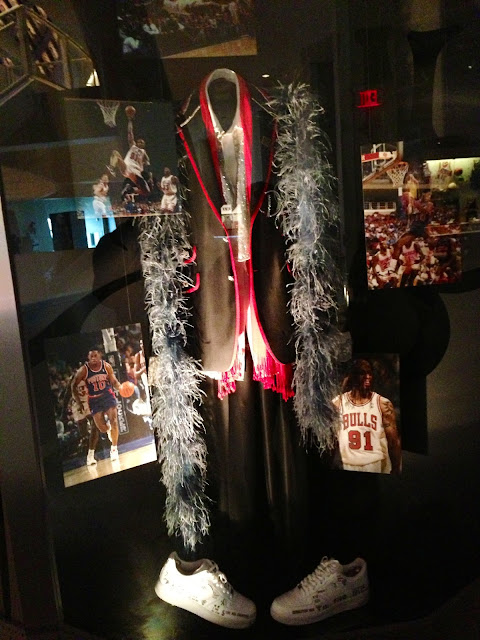 Also, the extravagance and flair of "The Worm", Dennis Rodman was one of the cooler displays in the museum. Rodman had just recently been elected into the Hall, which gives hope to guys like JR Smith of today! 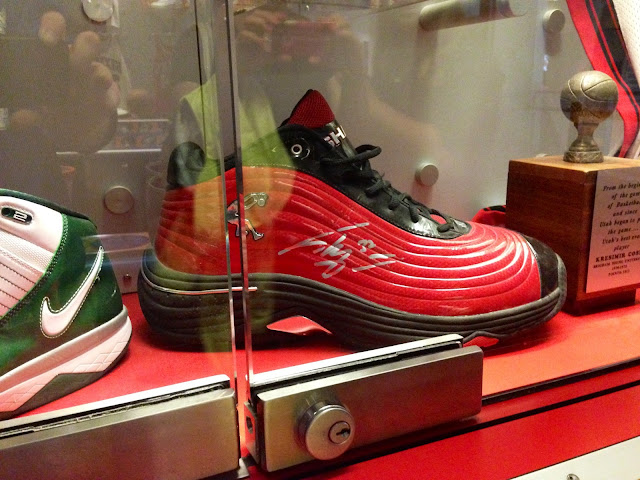 Lastly, I'll leave you with a nice signed Shaq shoe! I remember getting a cheaper pair of Shaq's for rec league basketball when I was little. I was the coolest kid on the court. Just kidding, my foot was just too wide for the Jordan's at the time. Shaq should be earning a permanent spot in the Hall relatively soon!

Well, there it is, the Basketball Hall of Fame all summed up to one post! While it wasn't much compared to the Baseball Hall, it was definitely cool and worth a look for any NBA or College Basketball fans!