Hey guys, Drew back here! So, last weekend my Dad & I made the journey to JP's Sports & Rock Solid Promotions' East Coast National! I just noticed that this trip marked my 5th consecutive East Coast National, which really speaks for how long I've been involved not only in the hobby but on my blog too. My goal for the show was to meet a solid core of players, most of which to add to my Mickey Mantle signed picture. I also wanted to move some pieces I didn't want and pick up anything that looked interesting.

As usual, I made a stop at my good friend's Rich & Hunter's table! They have treated me fantastically over the years so no matter what my goal for a show is, I always try to take at least something off their hands. I came up with these 6 cards that cost me about $25 in total! 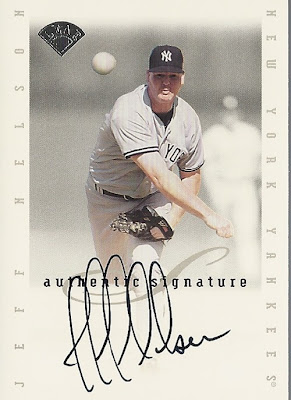 Jeff Nelson was a very good reliever throughout the 1990's, primarily for the Mariners and Yankees. He caught on with the Yankees right on time to win 4 World Series, and he was an integral part of Joe Torre's bullpen. Those teams were just before my time, but my Dad watched a lot of the teams and knows pretty much all of the players. This was my 1st Nelson autograph and I couldn't pass it up for the price. 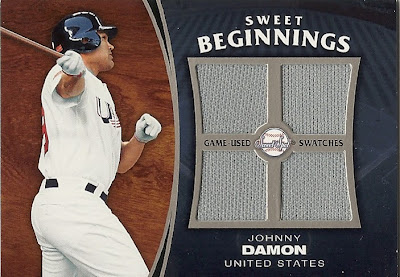 Johnny Damon was one of the few Red Sox I didn't mind when I start following baseball. Unfortunately, about the time I started following baseball, the Red Sox were on their road to recovery from their 86 year drought. Damon was one of the stars, and I couldn't stand the team, but there was something about that Caveman look that made me a fan. After he hopped over to the Yankees in 2006, I had an excuse to root for him and he was a solid player for the Yankees! I saw this quad relic of his from the World Baseball Classic and for just $3 I had to add it. 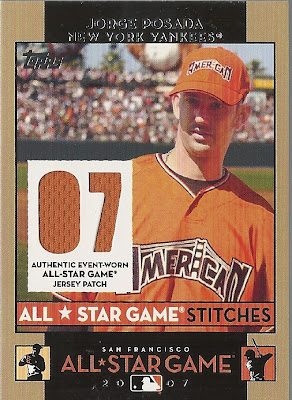 I don't have as much Jorge Posada stuff as I do the other core 4 members, so I added this 2007 Topps All Star relic. I don't know if it's the big nose and ears, but Jorge reminds me of the Core Four's version of Ringo Starr. With Jeter and Mo being legends and Pettitte a 'Dark Horse', Posada fittingly resembles Starr. 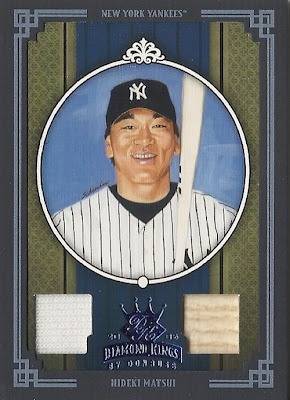 I always seem to forget about Hideki Matsui also, although I remember watching him vividly as I grew up. Here is a sweet 2005 Donruss Diamond Kings dual relic numbered out of 100 of 'Godzilla', one that won't be leaving my collection anytime soon! 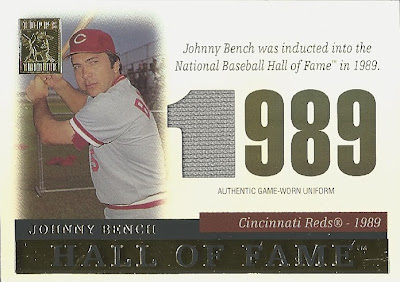 This Topps Tribute Johnny Bench relic caught my eye the second I saw it! After meeting Bench last month and having a relatively nice experience, I'm more than happy to spend a little more on adding to my personal Bench collection. I recently came up with a list of players I'm going to collect from here on out, in an attempt to liquidate all of the rest. I'll have a post all about that coming up soon. 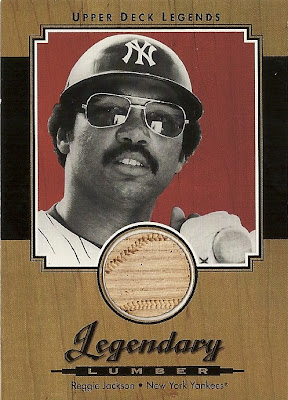 The final card of the 6 was this Reggie Jackson bat relic that actually has baseball seams engraved on the chip! I have a Willie Mays relic from the same set that I believe I bought from Hunter & Rich also, and it'll make a solid addition to my Jackson PC.

There you have it, that was all of the cards I bought at the show! Players and show stories coming soon to a computer in front of you! See Ya!
Posted by Drew at 5:02 PM