Hey guys, Drew back here! For as long as I've lived, I've wanted to see a parade. No, not one of those local town ceremonies highlighting the mayor and local boy scout troops, but a real top of the line parade (nothing wrong with boy scouts of course). When I first heard of the "Parade of Legends", the new Cooperstown Induction Weekend tradition, I knew the trip would be worth every penny. We didn't expect to get any autographs there, as the players all were atop beautiful new Fords. Apparently, a few of the players signed when they got off their cars, but I'm going to pretend I never heard that for my own sake. 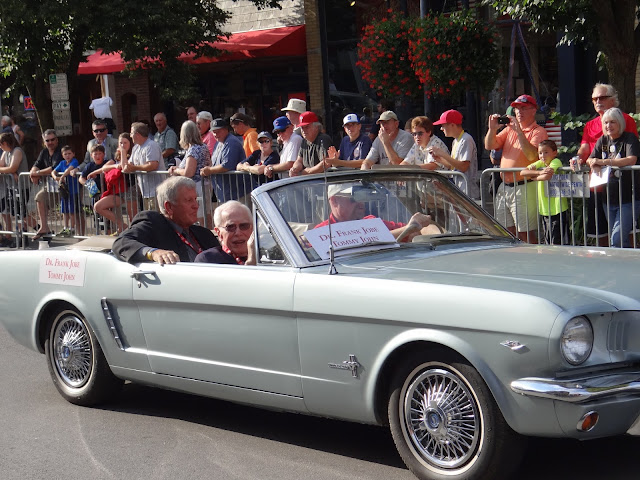 Kicking off the parade were some of the Hall of Fame board of directors, followed by a car starring Tommy John along with the man behind "Tommy John Surgery", Dr. Frank Jobe, who was honored earlier that day. The parade went down Main Street and parked at the Hall itself, where the players gathered for a nice dinner. I could only imagine some of the stories they had to tell. After my experience with Tommy John earlier this year, I would have paid good money to get into the Hall that night. 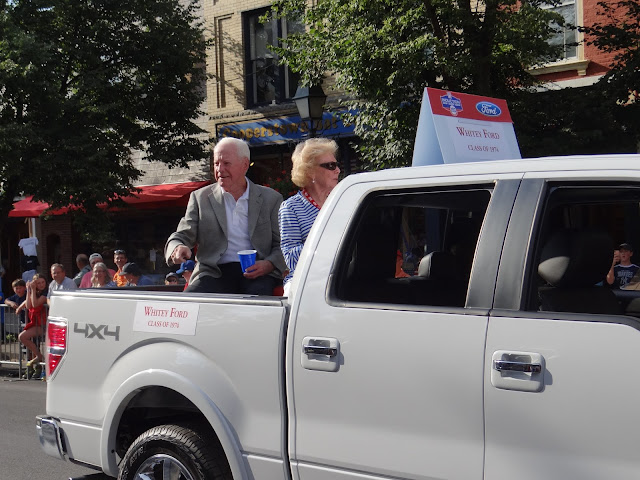 The parade started from the earliest inducted players that attended all the way to the most recent electees. Whitey Ford was in town for the night, so he was the first player to stroll by! I was really glad to see Whitey, as he appeared to be looking relatively good for his age. I met him last summer, but he's one of those guys you can never meet enough. 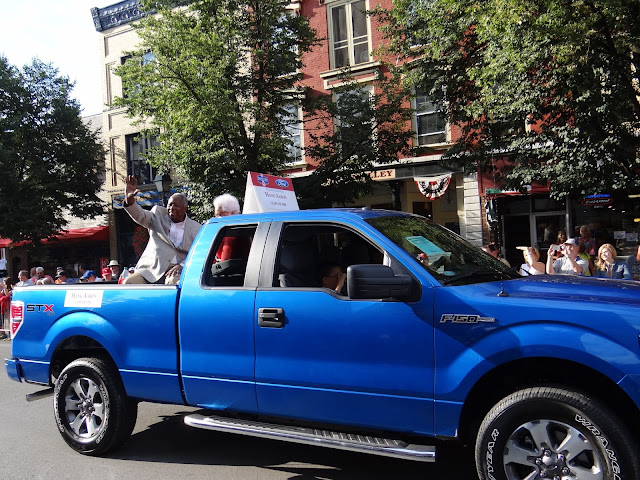 Ralph Kiner followed up Whitey, and he appeared awake, which was a good thing. The marquee player of the event however, was the true Home Run King, Hank Aaron! Aaron looks great for his age, coming from a guy who has never seen him in person before. He looked really happy to be there, although had he done an autograph signing earlier that day, his attitude may have been a bit different. 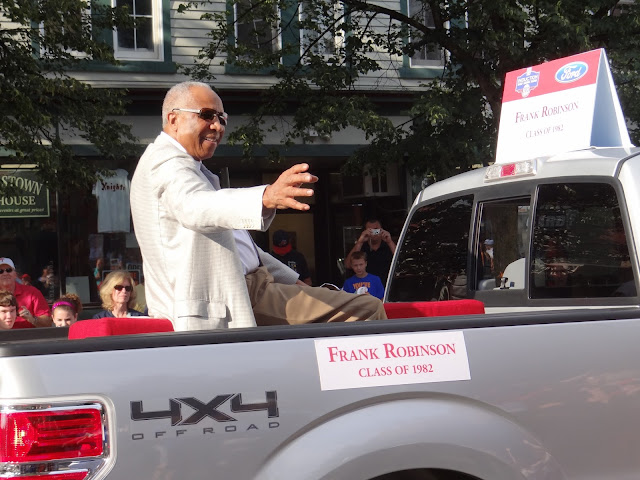 Frank Robinson is in my opinion one of the most underrated players of all time. He just never seems to get the credit he deserves. William's son Chris was as loud as ever throughout the parade, screaming out the players' names. He probably won't remember it since he's only 7 years old, heck I'm 17 and I don't remember what I did when I was 7, but Chris got a reaction out of almost every single player there. At least one member of our group was spotted out by a majority of the Hall of Famers! 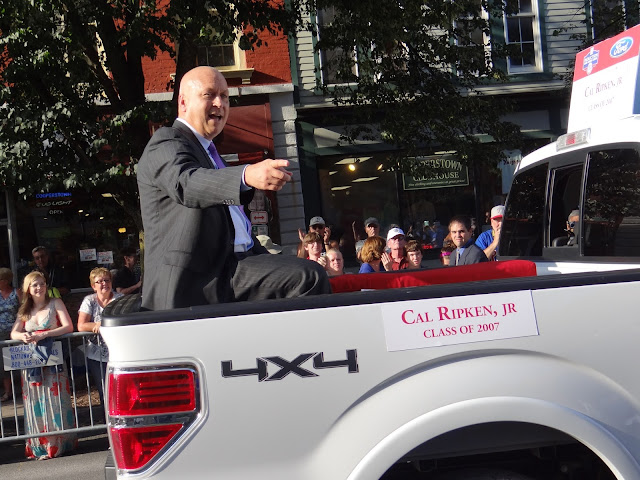 Believe it or not, this has been the third different occasion I've gotten to see Cal Ripken Jr. in person this year. Every time I see him I gain more and more respect for him also. Chris screamed "CAL!" until he got his attention, and Cal talked to him a little bit. That had to have made his day. 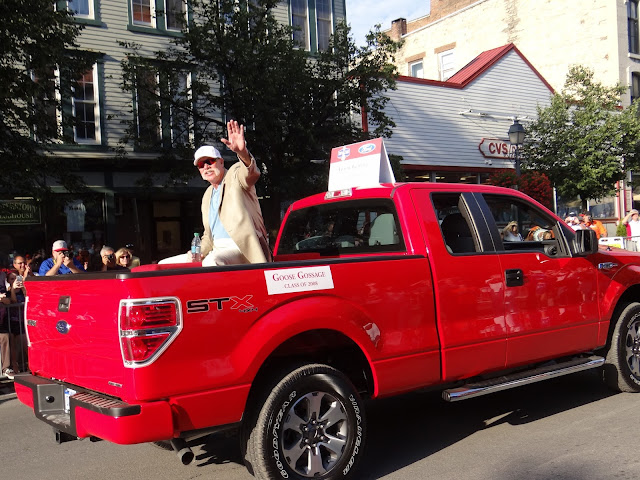 I'm sure Goose Gossage has met thousands upon thousands of fans in his lifetime, but I have a funny feeling that he recognizes my Dad and I at this point! Each time we've gotten the pleasure of meeting him, my Dad has brought up hunting and got to talk a good bit with him. He thanked us for coming out, and posed for a pretty awesome photo. Maybe one day I'll have him sign this, who knows. 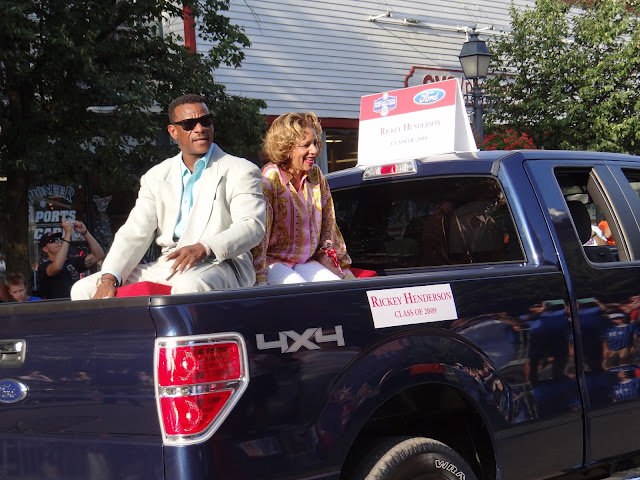 Here's classic Rickey taking all the glory in, enjoying the fact that he's finally among the greatest of all time (although he may argue that he was the best). I'll give him a spot in my top 15 ever, but I don't know how much farther I'd be willing to go. 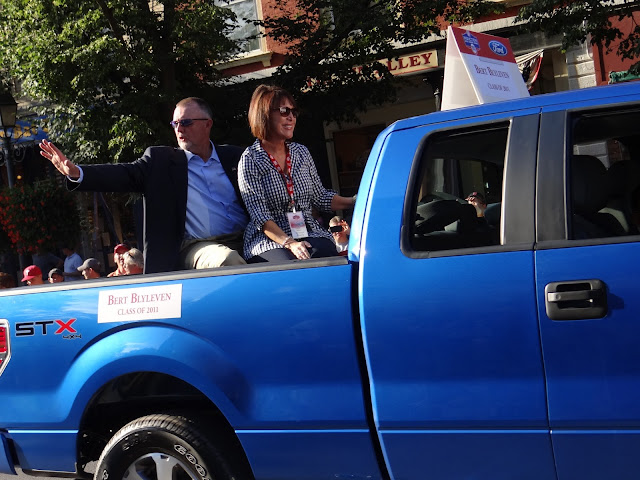 However, probably the most memorable moment in my eyes from the event came when Bert Blyleven passed us by! Sure, Roberto Alomar snapped a picture of the crowd next to us, Phil Niekro showed Chris his knuckleball grip, and numerous players waved to us and thanked us for attending, but this one took the cake. William recently bought a baseball signed by Blyleven with the "I Love to Fart" inscription, which exists because Bert frequently wore a shirt in the locker room saying just that. My dad yelled to Bert "Pull my Finger!" Bert looked puzzled for a second... and then cracked up. My dad made a Hall of Famer laugh!

I'm so glad we took advantage of going to the parade, as we all seemed to really enjoy ourselves. I love collecting autographs but sometimes it's nice to take in a special event like this without having to worry about being at the right place at the right time. Before I go, I'd like to send my best wishes to Tony Gwynn and his family, because while he was there, he sure didn't look very healthy. It appears as if his cancer may have reappeared, and he also gained back a lot of the weight he lost when he underwent his radiation treatment. I'm not sure if we just made some assumptions or not, but he didn't look all that well, so I'd like to wish him all the best going forward.

Well, that'll officially conclude my recap of Day 1 of the Cooperstown trip! It was hard for Day 2 to top this incredible day, but I've got plenty more to share with you all. Stay tuned for the next part!