Hey guys, Drew back here! As you may have noticed, I wasn't exactly pumped about how things went with my picture yesterday. Fortunately for its sake, I will be hopefully adding a few more big names in October, but that's all I'll say for now. Getting back to this show; I met 2 other players on the day, one being a guy I didn't plan on running into. We'll get into that in a moment, but I'll kick this off by talking a bit about a move I made that day.

Joe Zaccaro, aka "Real-Mccoy2" on eBay (owns the store "Real McCoy Collectibles) has become a friend of my dad and I's over the past year, first by selling and authenticating a Yogi Berra signed ball for us. He's always been into helping me out, whether it be by trading or buying or anything in general. He lives nearby where we are, and we saw (and bought) from him in Cooperstown just a month ago. The first part of business we tended to in White Plains that day was to visit him and see if he'd be interested in William's extra Rickey Henderson signed ball and my Robinson Cano signed 11x14 I've never been a fan of. Sure enough, he took both pieces off my hands, and with a little cash I was able to get William a signed ball he didn't have for his Hall of Fame ball collection, and I got this for myself: 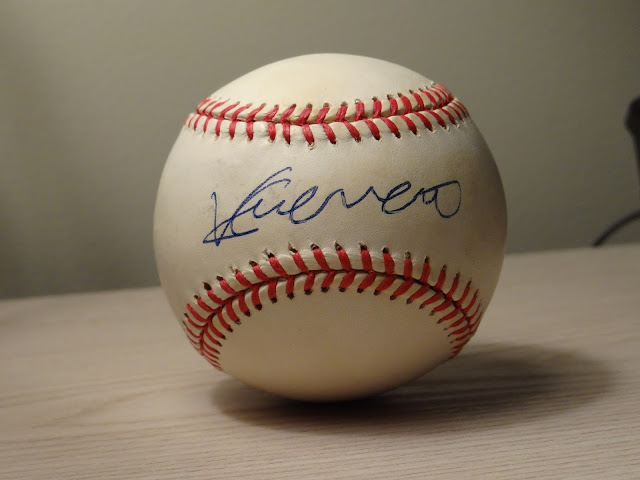 Signed on an Official National League ball is this sweet Vladimir Guerrero autograph! The ball is PSA/DNA and appears to have been signed early on in Vlad's career when he was a member of the Montreal Expos. Guerrero was a great player throughout the late 1990's and all of the 2000's, making 9 All Star teams and winning the 2004 AL MVP award. I've always had a lot of respect for him and his bad ball hitting ways. I remember seeing him play a few times in person, hitting pitches practically in the dirt and still getting hits out of them. I also loved how he would bat without batting gloves, and who could ever forget the pine tar covered helmet he wore every game? Overall, I'm glad I finally lost my least favorite signed photo in my collection (even though it was of Cano) and was able to add Vlad to my collection! 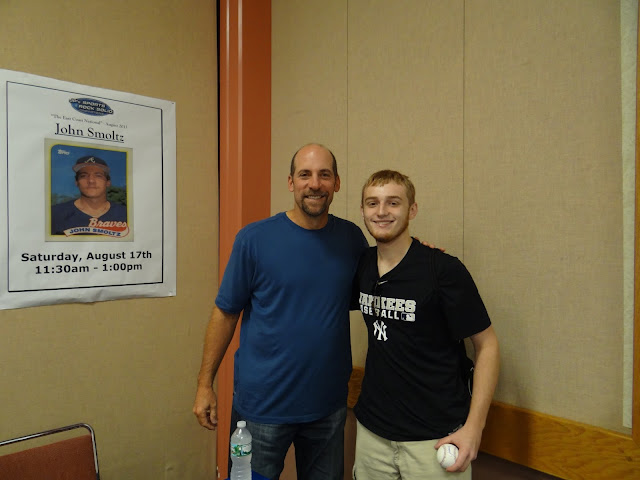 After I finished dealing memorabilia with Joe, I went to meet potential Hall of Fame pitcher John Smoltz! Smoltz was surprisingly looking lonely that day, as it didn't appear that many people were paying to meet him. I didn't understand that considering his great chances of making it into Cooperstown one day. He didn't end up matching his Braves teammates Greg Maddux and Tom Glavine in terms of wins, but a lot of that was due to his numerous injuries that would force him to move into the bullpen. He's the only player in history to have at least 200 wins and 150 saves, showing that perhaps the move to the bullpen shouldn't get into pitcher's heads as much as people say it does. Smoltz did both with success, and was an integral part of some great Braves teams in the 1990's. 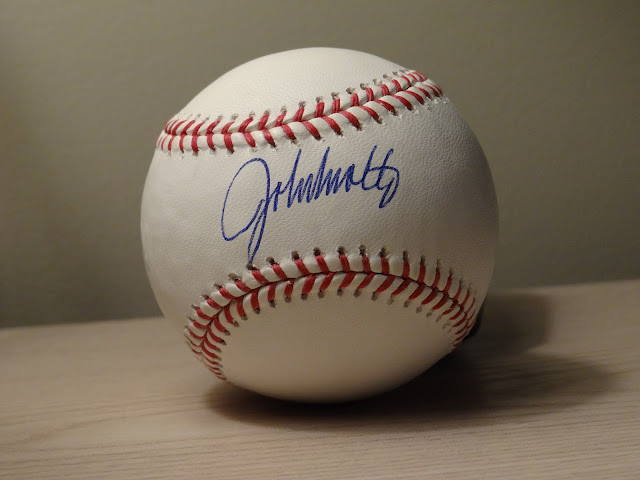 He signed a ball for me that I have already put right next to Jack Morris' in my baseball display, where he should be. In Game 7 of the 1991 World Series, Morris and Smoltz faced off in what was one of the greatest pitching duals in postseason history. Morris ultimately won the battle, but Smoltz had plenty to look forward to over the next few years for it to hit him too hard. Morris was Smoltz's boyhood idol, and by comparing their autographs, I wonder if Smoltz practiced signing his name like Morris', because their autographs look extremely similar. Either way, Smoltz was a quiet but very nice guy and I'm really glad he now owns a spot in my baseball collection. Next stop: Cooperstown! 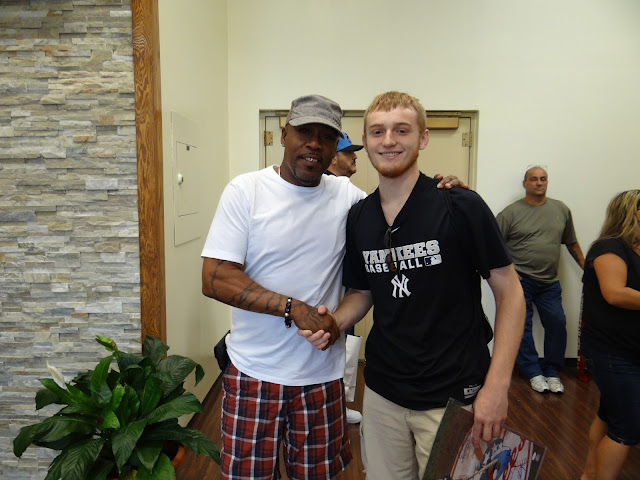 As we left the signing room, we saw someone walking around shaking hands and taking pictures with fans. We overheard that the player was former controversial Met and Giant outfielder Kevin Mitchell, who was scheduled to sign the day before. He was being interviewed by a local radio show at the County Center however, and he along with his shiny gold tooth posed for a picture with me! It was a nice surprise, although I didn't wind up getting a signature out of it. 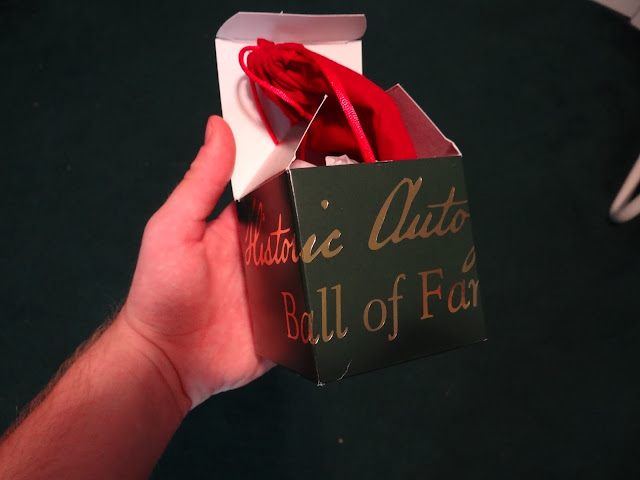 Before we left the show, my Dad wanted to treat me by getting one of those unpredictable signed baseball boxes. He let me choose what company and box I specifically wanted, and I went with one of the "Historic Autographs Ball of Fame" balls, which basically guarantees a Hall of Famer. William has busted a few of these in the past, so I wanted to give it a whirl. It turned out to be the most ironic moment on quite an eventful day. 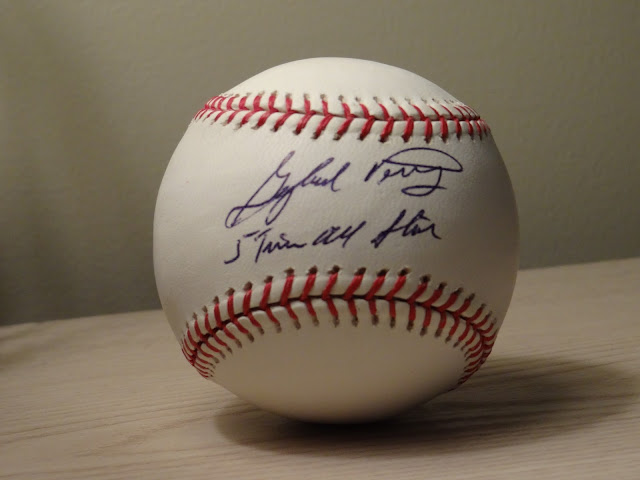 Oh yes indeed, we landed a Gaylord Perry signed ball out of it. There was good news and bad news that came out of this: the good being that since we didn't get to have Perry sign a ball using our other free ticket, we still didn't have him yet... the bad being that this ball cost about $80 more than the free opportunity we were given that day. We don't like to think about that though, so here's our Gaylord Perry signed baseball, inscribed "5 Time All Star". I wish it had the Hall of Fame inscription instead, but these mystery boxes are always unpredictable. Thank you Dad for buying me one though, I really appreciated the gesture even though we pulled someone we weren't exactly hoping to get!

Overall, it was a pretty solid show! I got a lot accomplished, and even though I didn't get a chance to meet Paul O'Neill I think Dad and I found a way to make up for it. Hopefully October will produce who's on the lineup, and if so it should be a pretty awesome show!