I have been thinking. Since Manny Ramirez was supposedly caught for using women HGH garbage, I think I have an idea. The Red Sox were NEVER caught for using a drug like that, and you know what, I think that John Henry, the owner, is covering something up. I just finished reading the book: Cover Up by John Feinstein, which was a great book, and it has given me some ideas. Here they are:

Manny's HGH he used is a post steroid substance, something only players use after steroids. My guess is that he has used a steroid or two before, maybe even in Cleveland, but most likely in Boston. Now, David Ortiz lifetime as a Twin, hit 58 home runs in 6 seasons, with 238 runs batted with 393 hits total. The next year he was dealt to the Red Sox, with Manny already on the team, and he finished 5th in MVP voting (2003). He went on to finish in the top 5 in MVP voting 5 years in a row starting in 2003, and the next year he started a streak of All Star Games played until this point, which doesn't look good for Papi. Manny finished 6th in the voting in 2003. Now take a look of Ortiz in 2002 and Ortiz in 2003. Big difference. But my theory is that Manny Ramirez may have been a steroid supplier to David Ortiz, and someone else, one you will hear about in just a minute. Ortiz's home run totals went from 20 in 2002, to 31 in 2003, to 41 in 2004, to 47 in 2005, and to 54 in 2006! His weight has stayed the same throughout his career at 230, but may not mean anything in the long run. When Manny left Boston, in 2008, Ortiz struggled. I can't find his 2nd half stats from last year, but lets say that he hit 20 home runs total, and his batting average dropped 68 points! This year, Ortiz has 6 home runs and a current .213 batting average, and only 30 RBI! It's not like he didn't get the run support! Dustin Pedroia ahead of him, and Kevin Youkilis and Jason Bay behind him. Youkilis came in 3rd in MVP voting last year, and Dustin Pedroia won the MVP! If he can't live with that than that is emmbarressing! Now I want to throw a curveball at you, Kevin Youkilis. Look at his changes from a 2006 card and a 2009 card: Again, it looks like a lot but he did stay the same weight. Barry Bonds may have been the only player other than Canseco and Giambi that gained a LOT of weight during steroids. Sammy Sosa and Rafael Palmeiro stayed relatively the same size, but did grow for sure. The stats with Youkilis. Before 2008, Youkilis had 38 home runs and 199 runs batted in. In 2008 his average went up 24 points from the year before and set career highs in every category imaginable! The only time he has ever been an all star was 2008 and soon to be 2009. He's not cooling off, but who knows, maybe he is taking women roids too!

Alright, that pretty much sums this up. I know Offy will reply to this and I'm expecting some ugly comments from this, but I think I have a point and I'm sick and tired of Curt Schilling pointing out Yankees doing roids and I think his team has to be looked at. We'll end this post with something happy. And this is your 2008 AL MVP! 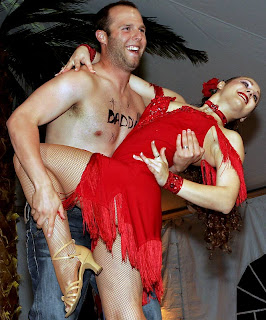