Hey everyone, Drew back here! I hope you all are enjoying a nice, relaxing Memorial Day Weekend with your loved ones. But, if you have a few minutes to scour the blogosphere, allow me to show off a lot of James Kaprielian cards I purchased off of eBay while I was studying abroad! 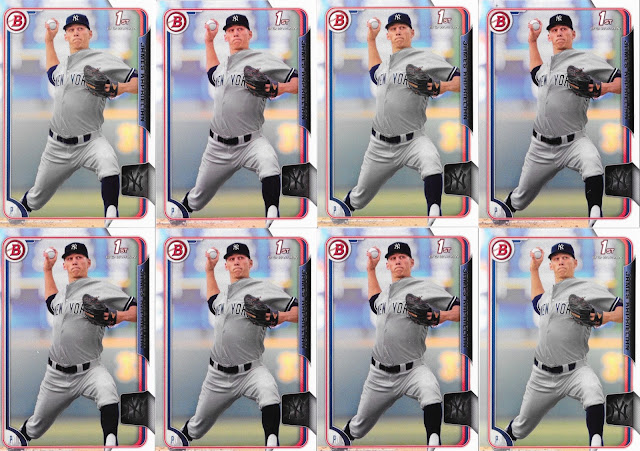 Kaprielian is the Yankees current top pitching prospect by a considerable margin now that Luis Severino has graduated to big league status (for now). The former UCLA standout was drafted as the 16th overall pick in the 2015 Draft, and is estimated to make his debut in the big leagues in 2017. He's only started three games in 2016, and is currently on the disabled list with elbow inflammation. Luckily, it doesn't appear to be anything more than that.

This lot included 8 copies of his 2015 Bowman rookie card and 5 of his "Draft/Dividends" inserts, which shows how much your draft stock can improve by going to college. Kaprielian was drafted in 2012 in the 40th round by the Mariners, but his decision to go to UCLA helped him grow into a first round talent.

The centerpiece of the lot was this gorgeous Bowman rookie refractor autograph! In my honest opinion, there is no better card to own of a player than one of these. Bowman offers several rarer color parallels, but the basic refractors are often relatively affordable while also being aesthetically pleasing.

Over the summer, I'm going to be looking to add Bowman refractor autographs of several of the other Yankees top prospects. The major targets will be Aaron Judge, Jorge Mateo, and Gary Sanchez. Unfortunately, this mini project will probably have to wait a little while because I'm a little short on money at the moment.

Which product do you think offers the best, most memorable autographed cards?
Posted by Drew at 4:24 PM