Hey everyone, Drew back here! While I was away, I used this site as a platform for blog posts required for a Multimedia course I took. I don't know how many of you chose to read those, but I hope you enjoyed seeing some different material than usual.

After a few months away from our blogging community, I think it's about time I catch you all up on my collection. Now that I'm back in the states, I plan to reignite my interest in the hobby, while working with the smallest budget I've ever had. I did arrive home to six TTM successes, which happened to be six more than I initially expected to find. 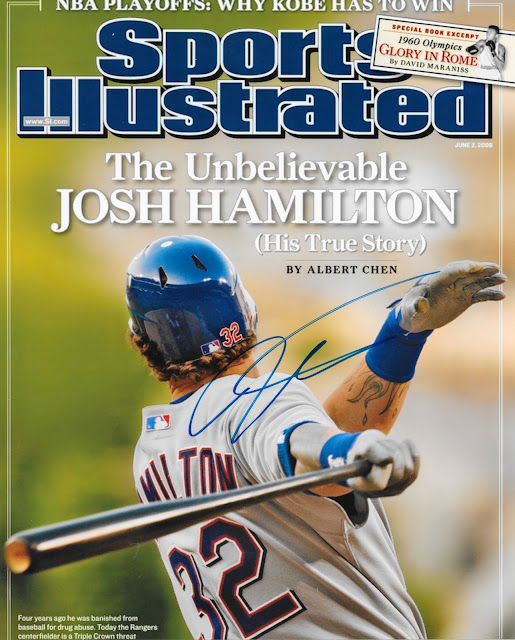 Every year, the Josh Hamilton story grows increasingly distant from my memory. I've always been a huge fan of his, but it's felt like forever since he was a productive baseball player. Hamilton received his second left knee operation last offseason that initially slated him to return about midway through the 2016 season. However, there was still meniscus and cartilage damage remaining that will now be operated on; thus concluding his 2016 campaign before he even took the field once. He's now 35, and while he may plan on returning next season he may not draw interest from any clubs. It's safe to say his days as an MVP and Home Run Derby champion have come to a close.

Hamilton has been one of the most consistent TTM signers in today's game over the past few years. He usually will sign during the winter and return all of his fanmail from the prior season, and it appears as though he's done it again. My glossy 8x10 copy of his Sports Illustrated cover came out awesome. Maybe next year I'll finally get him on a ball.

My Dad was able to open my TTM's for me while I was gone and send me pictures of the successes; which certainly helped me feel close to home. On the same day, I received the following two autographs from some of the game's better young prospects. 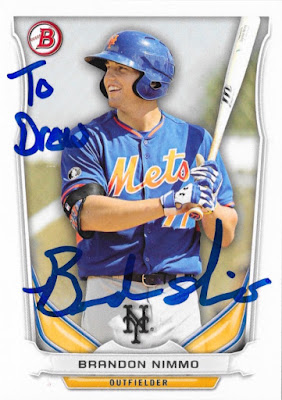 Nimmo was the Mets 1st round draft selection in 2011, and currently ranks as their 4th overall prospect according to MLB.com. He profiles as a well rounded player that particularly exceeds at hitting for contact, and currently plays for their Triple-A affiliate Las Vegas 51s. In 40 games this season, he's batted an even .300 with a home run, 20 RBI, and 22 runs scored. It shouldn't be much longer before he gets an opportunity to shine in blue and orange.

He personalized my 2014 Bowman card and signed it cleanly in blue sharpie. 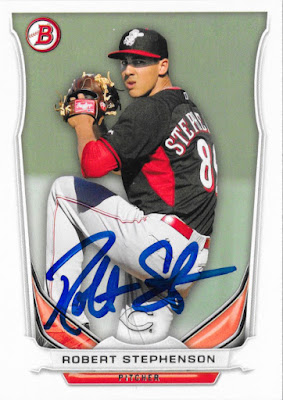 The Cincinnati Reds are the National League's second worst team in 2016; only better than the historically bad Atlanta Braves. Over the past year, they've lost Aroldis Chapman, Johnny Cueto, and Todd Frazier while attempting a rebuild phase. This 6'2 hurler appears to be at the forefront of this movement, and has the potential to one day be the ace of the staff. Stephenson was also a 1st round pick in 2011, but has developed relatively slowly ever since. He made his MLB debut early this season and made two quality starts for the Reds before they sent him down to work on his ability to throw strikes and account for service time. We should see more of him on a big league mound later on this year.

Stephenson also signed a 2014 Bowman for my collection nicely in blue sharpie. 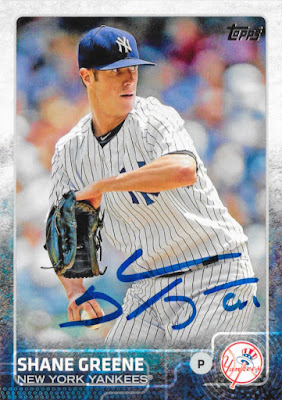 It's been an inconsistent journey for Shane Greene since he was sent to Detroit in the three team deal that landed New York their current shortstop, Didi Gregorius. Greene broke out with the Yankees in 2014, recording a 5-4 record and a 3.78 ERA in 78.2 IP. He started off strong last season with the Tigers before he struggled immensely and found himself in Triple-A. At the end of the season, he was falsely diagnosed with an aneurysm in his throwing hand but then also underwent shoulder surgery. He's currently rehabbing and working his way back up to the Tigers 25 man roster. Needless to say, I would do that trade again every time if I could. 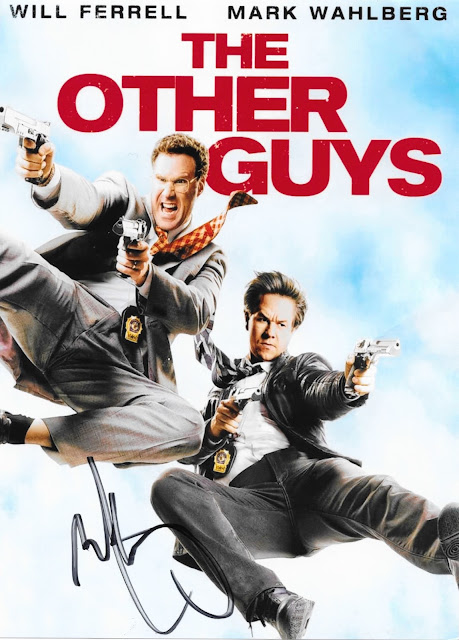 Marky Mark. Yeah, that's the one. I also forgot I sent this out, and I wish I had some way of knowing when I initially sent the request. Wahlberg has rebounded well from his mediocre rap career with "The Funky Bunch"; starring in several blockbuster films such as "Boogie Nights", "The Departed", "Ted", and one of my all time favorite movies: "The Fighter". I believe I included a 4x6 glossy shot similar to this "Other Guys" photo of the boxing classic (and "Ted" now that I think of it), but I'm not 100% sure. "The Other Guys" remains as one of my favorite Will Ferrell comedies, despite having seen it more than my fair share of times.

Wahlberg signed this photo nicely in black sharpie. It would be cool if I could add Will Ferrell on it eventually, but I won't be upset if I don't. 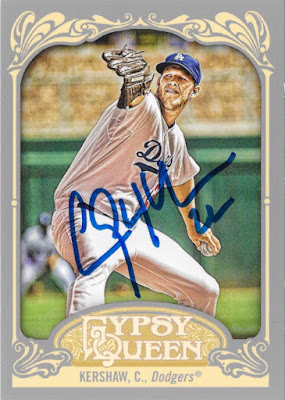 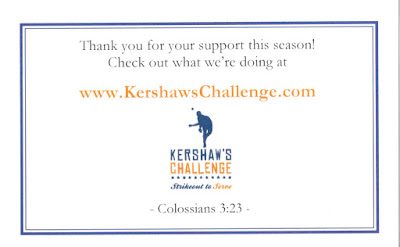 We wrap my comeback post up with a success from Sandy Koufax Clayton Kershaw! Just when you thought Jake Arrieta and several of baseball's rising stars would begin to compete for the "Best Pitcher in Baseball" moniker, this guy started doing things even he hasn't yet done. This month, he's thrown 3 complete game shutouts (no typo), bringing his current line to 7-1 with a 1.95 ERA and 95 strikeouts. I've seen Pedro Martinez, Randy Johnson, Roger Clemens, and Greg Maddux pitch before, but since they weren't in their prime at that point of their careers I can definitely say that Kershaw is the best I've ever seen.

Kershaw, like Hamilton; is a top notch TTM signer. He signs usually every February if you send to the Dodgers stadium address. I would take advantage of this opportunity while you can, because at this rate we won't be able to afford his John Hancock for much longer. He also included a note about "Kershaw's Challenge", his organization that encourages people to use their faith to make a difference in the world. There isn't a single bad thing I can say about this guy; he's as classy as they come.

I hope you all enjoyed my return to form, and I would please like to encourage you all to spread the word about this site. I don't know if everyone has caught on to my new stomping grounds here at "The Hot Corner", but now that I'll be getting back to posting regular content I would like for those of you in the community to at least have the opportunity to read my material.

Thank you so much to every one of you for helping make this site possible. Ciao!
Posted by Drew at 2:09 PM