Son of the Mick!

Hey guys, Drew back here! A little over a week ago now I received one of my cooler through the mail successes in recent memory. I don't know if any of you remember, but around this time last year I got an autograph back from Babe Ruth's 97 year old granddaughter Julia Ruth Stevens. Continuing that theme, I sent to David Mantle, Mickey Mantle's son; shortly thereafter. After about a seven month wait, my Dad opened up this really special success for me, and I can't wait to come home and see all of these for myself. 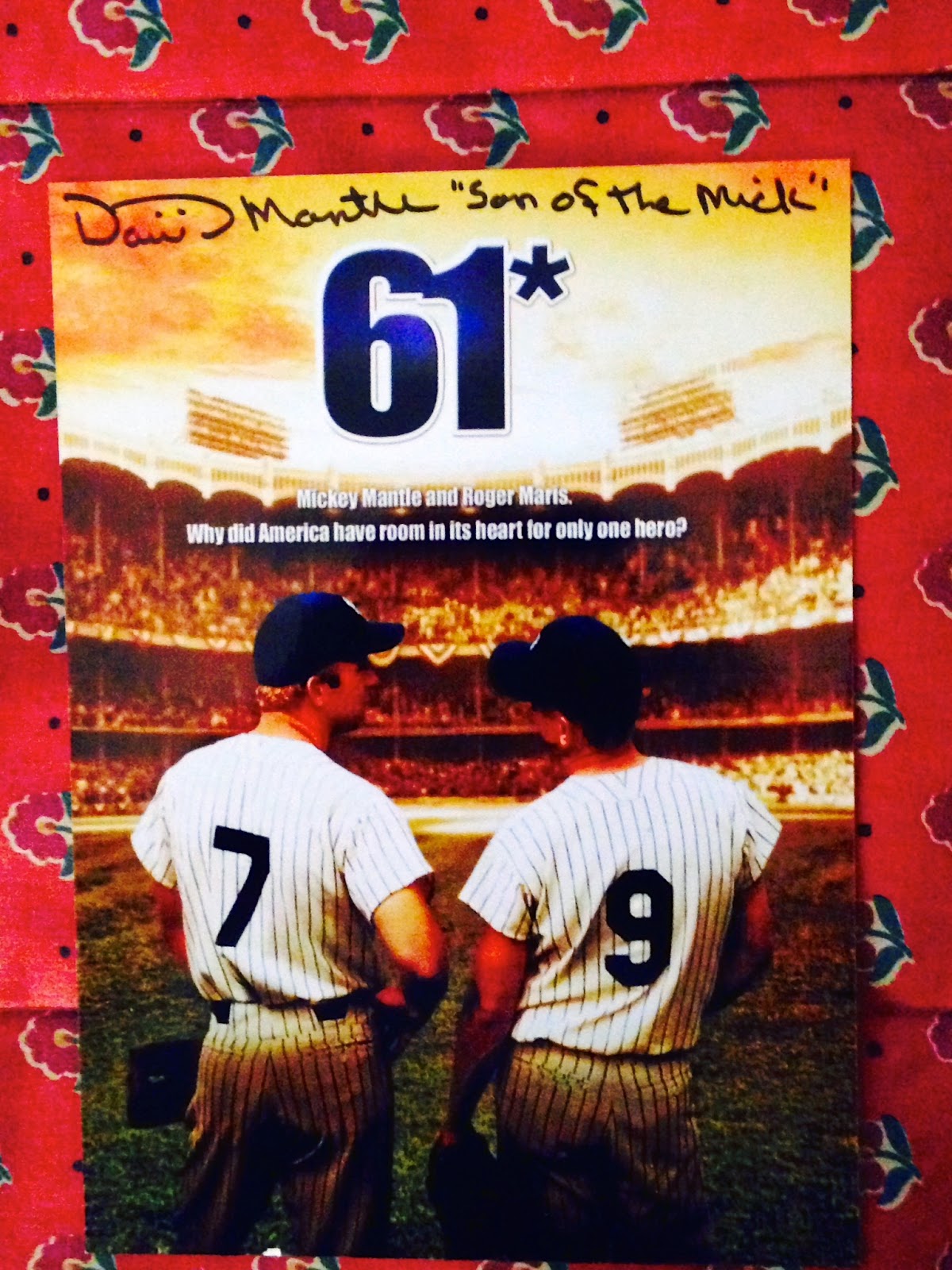 I gathered a bunch of Mantle related items to send his way, the first being a 5x7 movie cover from Billy Crystal's "61*". I really enjoyed this movie, although I haven't seen it in a while. I've been collecting the 1961 Topps set on and off over the years, and the '61 season as a whole is one of my favorite seasons to read about! 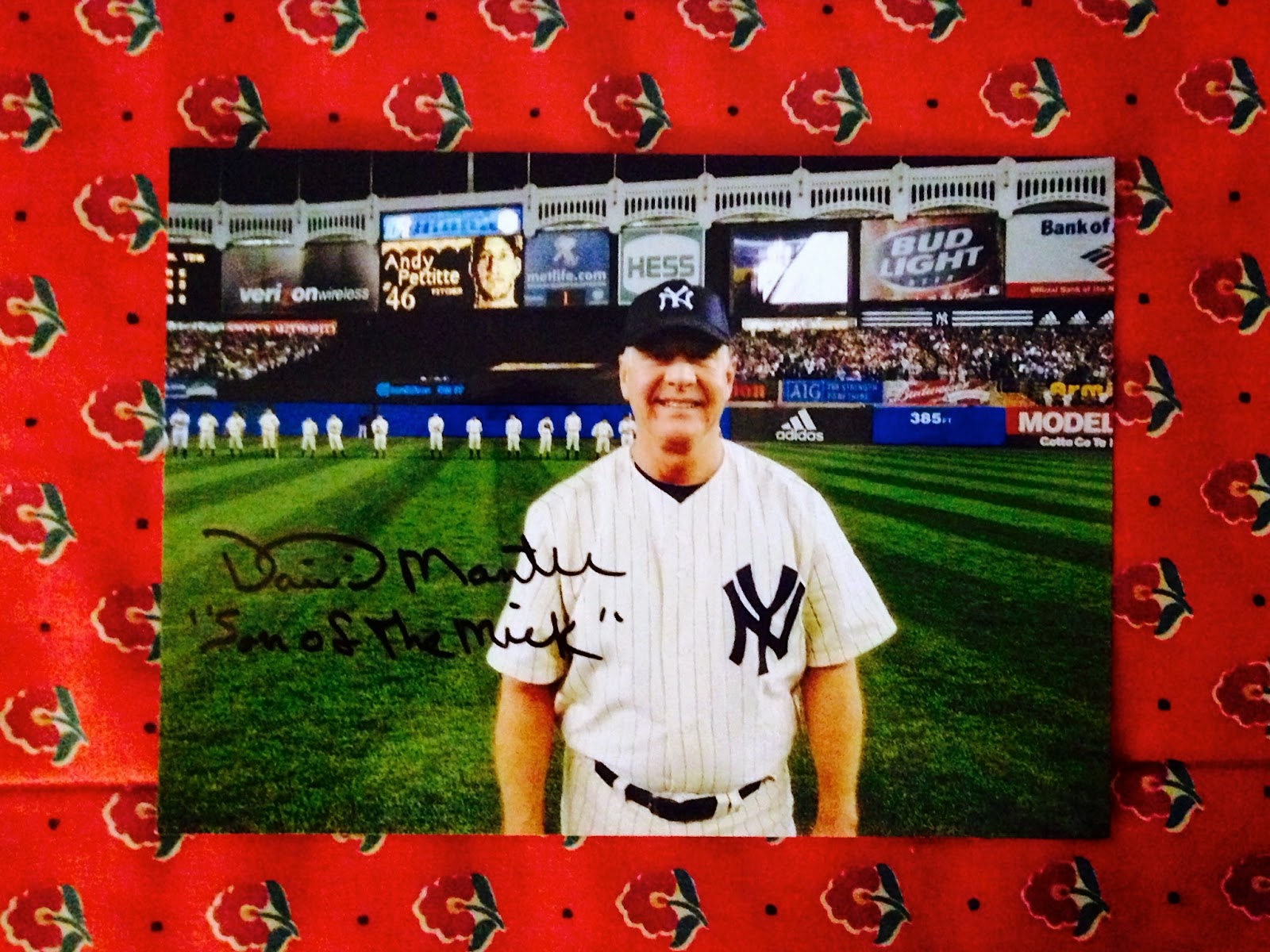 I'll always remember watching the final game at the old Yankee Stadium back in 2008, and this is actually David standing on the field representing his dad. The Yankees brought out all of their legends, and if they had passed away, either a family member or an impersonator took their place. David stood in for Mickey, and having this 5x7 from the event will help me never forget the special event it was. 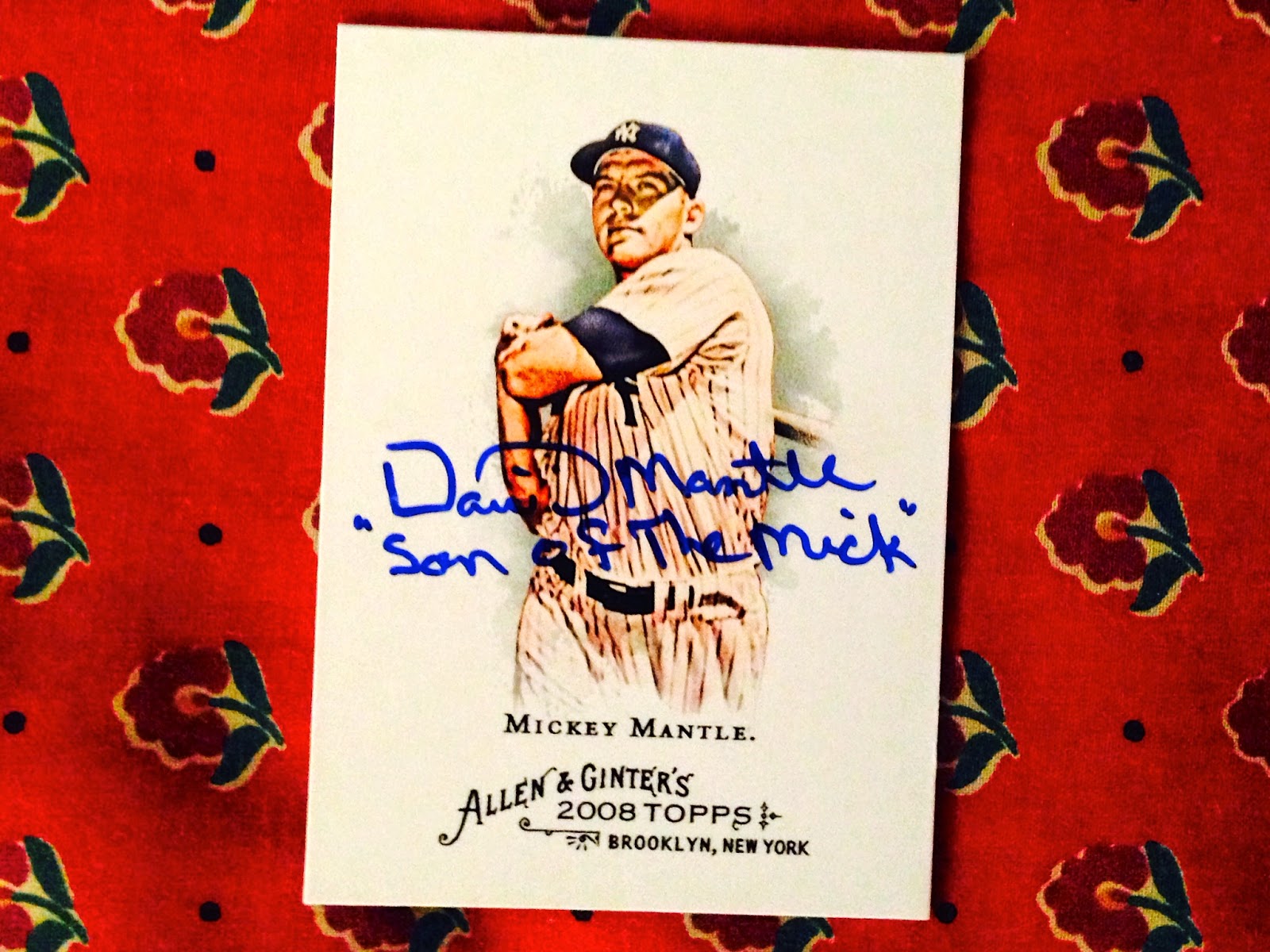 David also signed a 2008 Topps Allen & Ginter for me, which came out beautiful signed in blue sharpie. 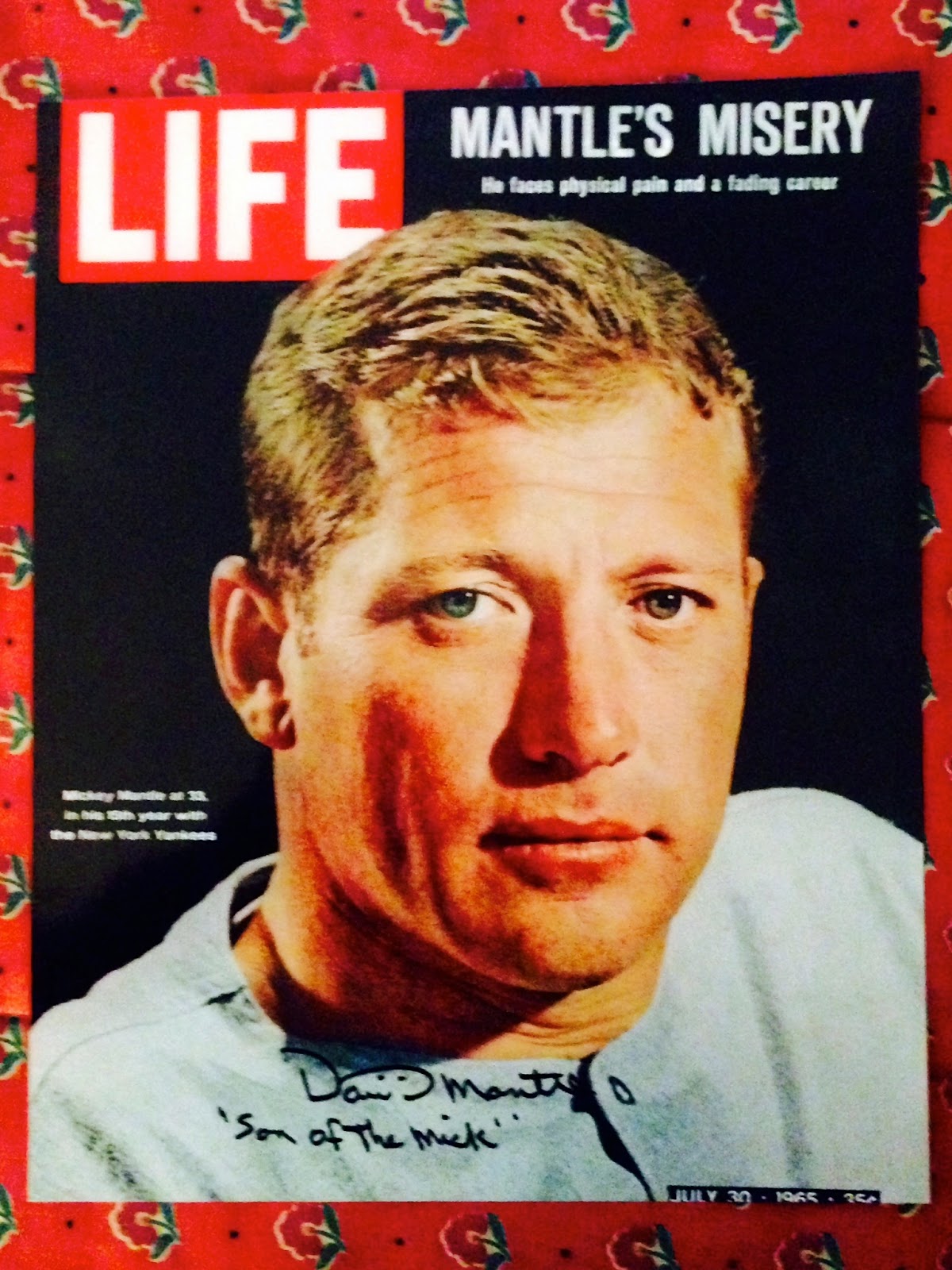 The big piece here was this 8x10 Life Magazine cover of Mickey towards the end of his career. Although the cover suggests a negative downspin to Mantle's playing days, I really liked the cover and thought it would look great sporting his son's autograph. It did! By the way, in case you haven't noticed, each and every item was inscribed "Son of the Mick".

But, that wasn't all. David wanted to convey a message to me on my letter, and it was really something special. He wrote below my letter and then flipped over to the other side of the paper and continued, so take a look: 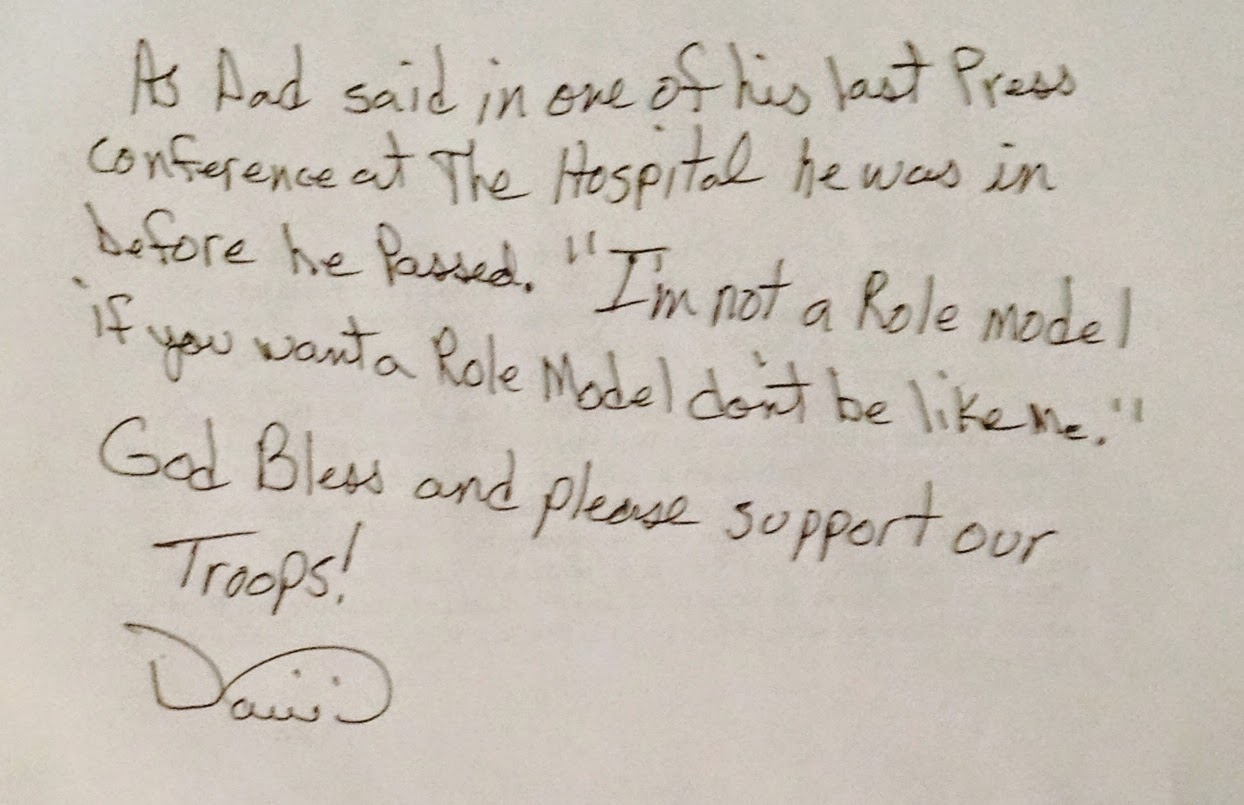 "Please keep up the good work! Make your parents proud! Thank you for your letter. Please learn from our families mistakes, don't drink, etc. Ok, Thank you, David Mantle, PS: We learned the hard way (over)

As Dad said in one of his last press conference at the Hospital he was in before he passed "I'm not a role model, if you want a role model don't be like me." God Bless and please support our troops! David"

Mickey was a hero among heroes in baseball, however there was plenty of tragedy involved in what could've been a record setting career. Many believed he had the potential to top the Babe and have the best offensive numbers in the history of the game. I believe Mickey had the greatest potential of all time, while Willie Mays is in my opinion the best all around player of all time. This letter was extremely down to Earth and kind of David, and it really meant a lot to me that he took so much time out to sign my items and give me some advice. It'll be nice to have these autographs to go along with my DiMaggio/Mantle signed photo, as well as my multi signed Mantle 16x20 project I've been working on. All in all, one of the coolest successes I've ever gotten!

Thanks so much Mr. Mantle! Have a great night everyone, and See Ya!
Posted by Drew at 6:13 PM