Hey guys, Drew back here! I've officially been in college for just over 2 weeks now, and it feels like just yesterday that I was unpacking my bags here. However, I don't have much planned this weekend, so I figured I'd catch you all up on probably the coolest thing that I experienced with my favorite hobby over the summer! 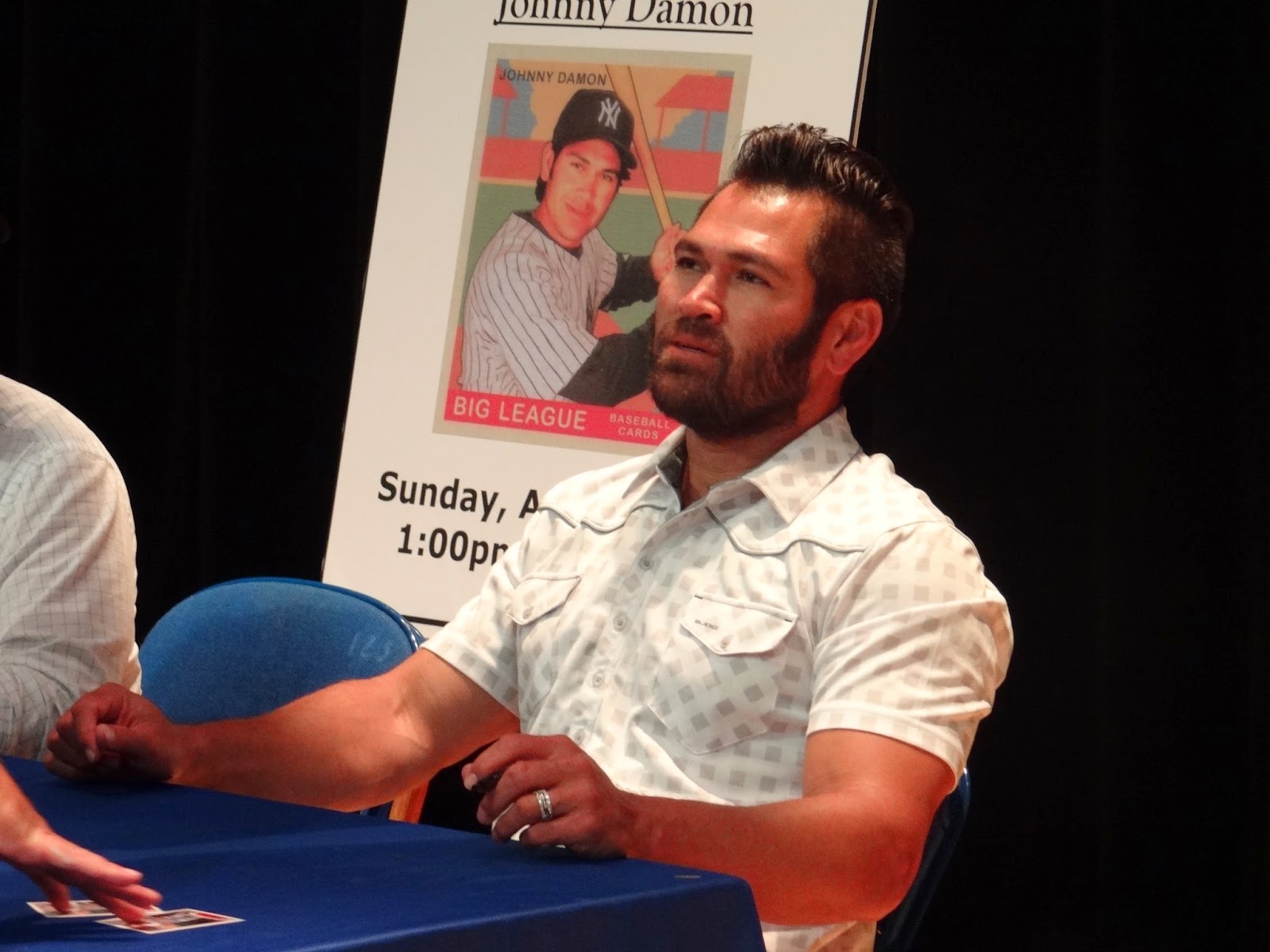 At the East Coast National, I paid to meet Johnny Damon, one of the first players I grew to love when I started following baseball! Of course, when I first started watching, I saw Damon kill the Yankees in the 2004 playoffs, but when he became a Yankee in 2006 I bought his jersey and became an instant fan. The price was steep on Damon's autographs at the show, but it was well worth getting to meet one of the players that helped me fall in love with baseball! 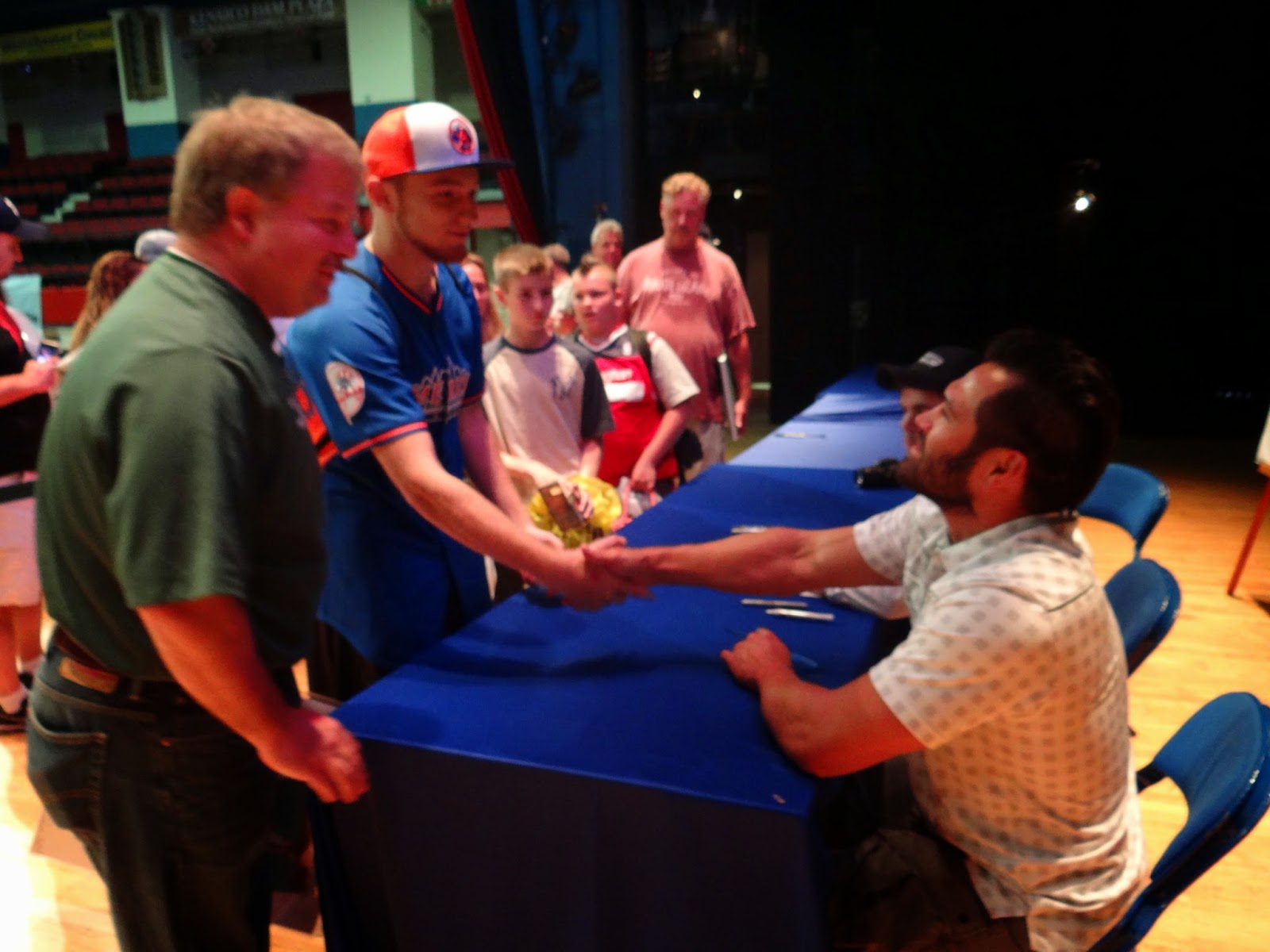 We lent one of his representatives my mom's camera for the experience, and she captured the handshake perfectly! I told Johnny how grateful I was for all the memories he left Yankee fans and for being a part of the 2009 World Series team, and he was gracious and kind back to me. He's always been known for being a little on the awkward side, but I think that trait makes him more likable anyway, as I am certainly am too! 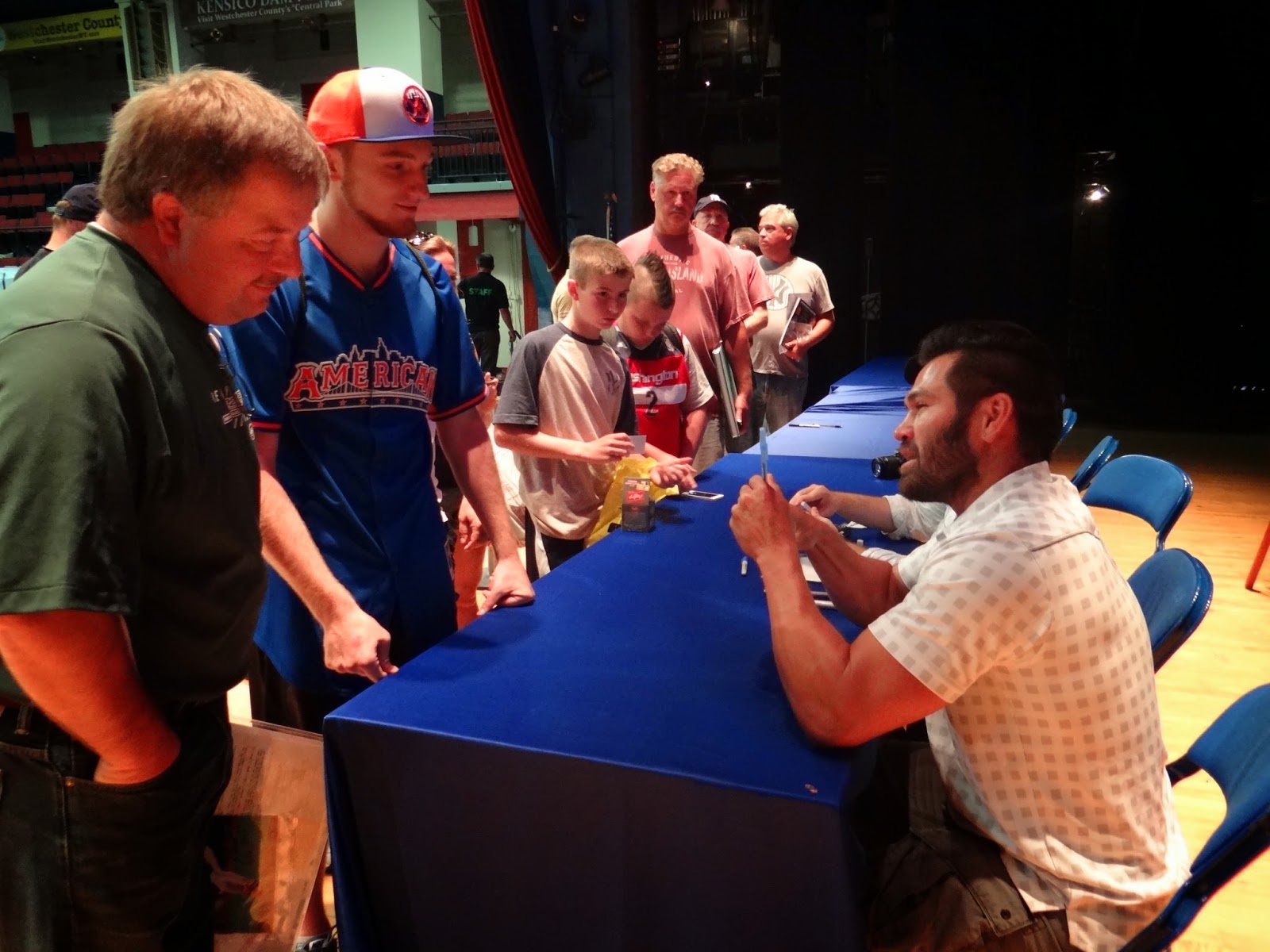 Johnny noticed my Dad's Jets shirt and started making small talk with him about how the Jets will be this year! My dad asked him who he'd prefer to see at Quarterback, and Damon answered with Michael Vick! 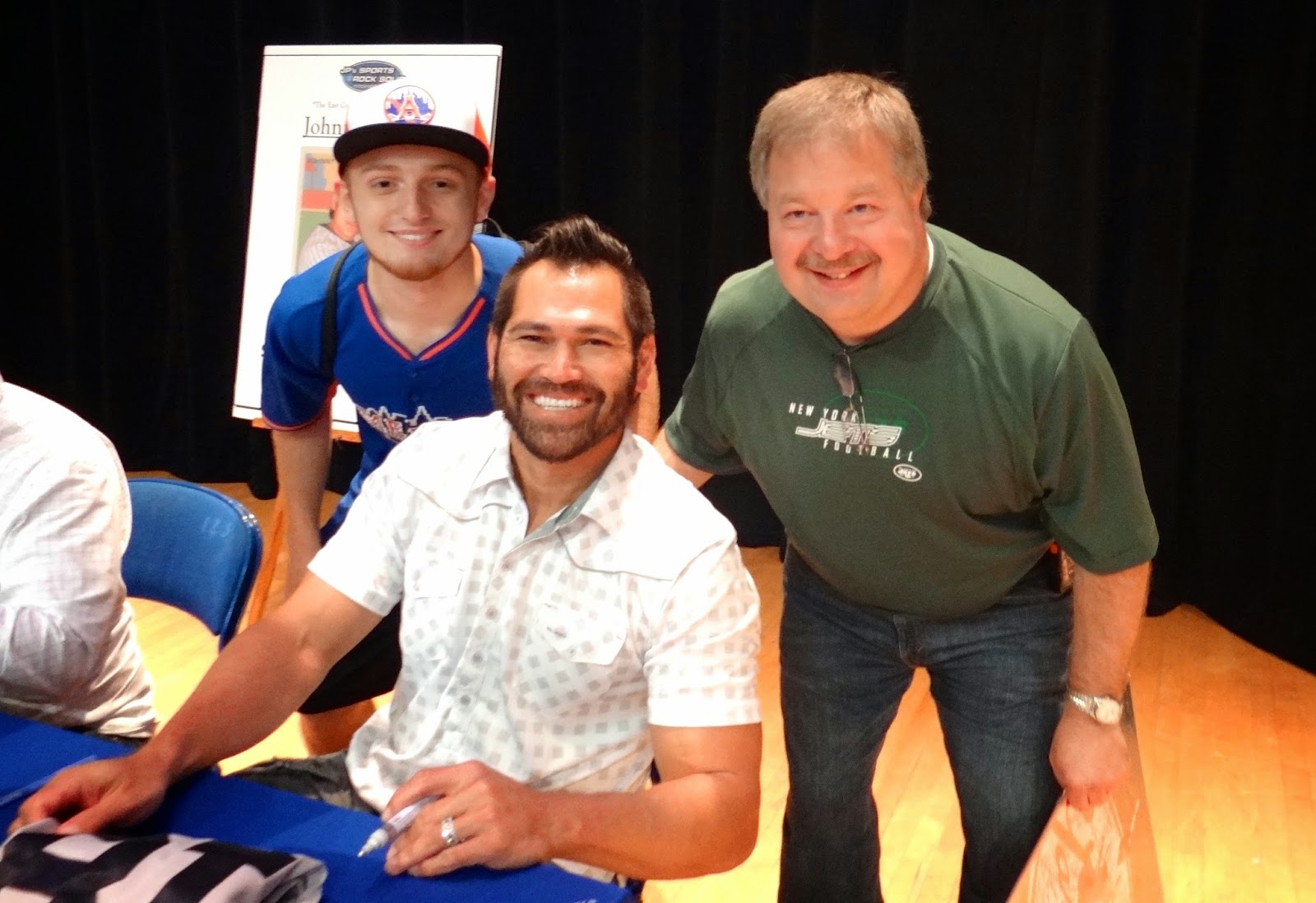 We got a really great picture with "The Caveman", who I must say has a great hair/beard look going for him at the moment. We thanked him for everything and went on our way with a new, beautiful piece to add to our collection, and we raved about how kind Damon was to others at the show. 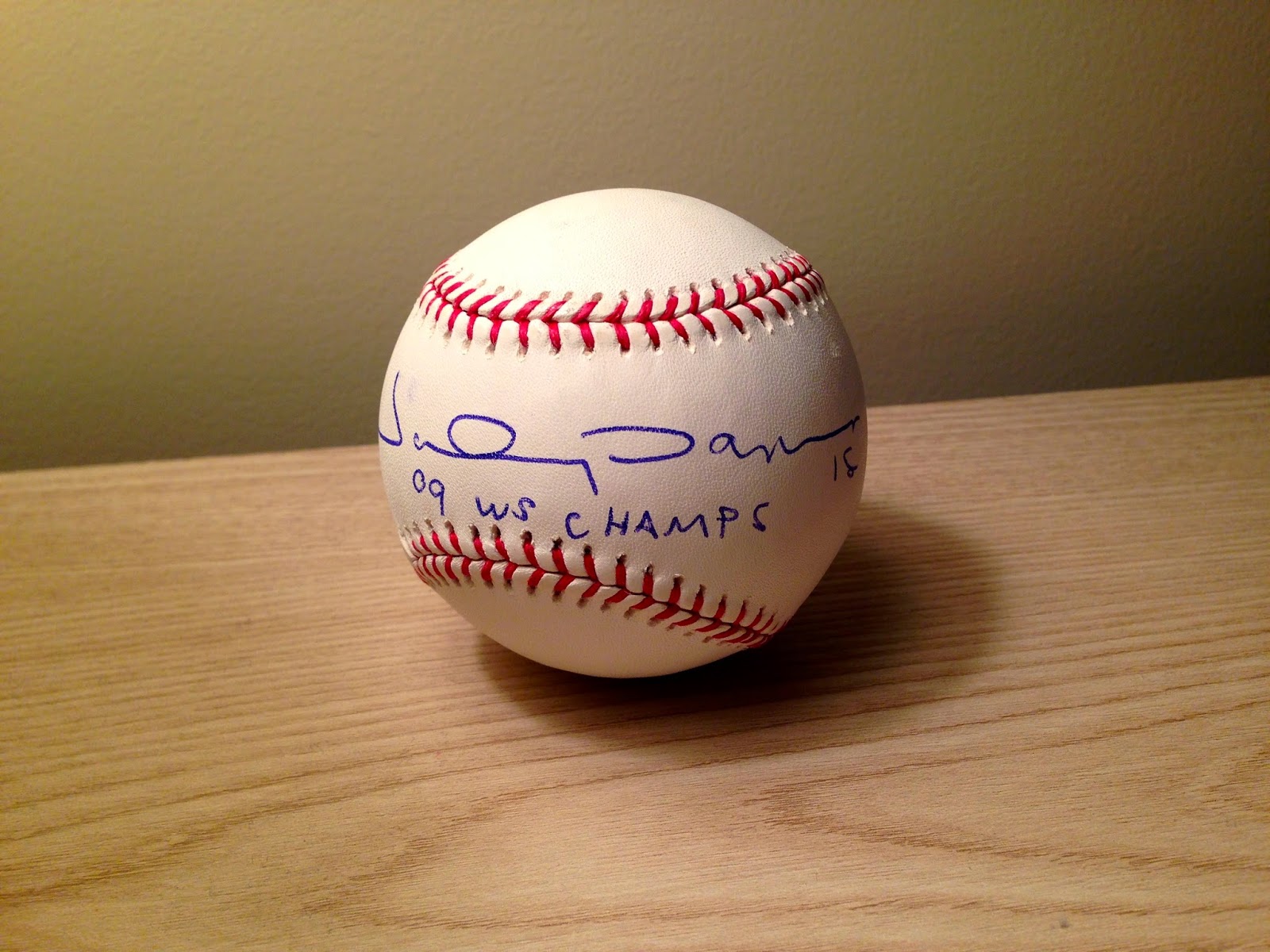 I wasn't sure what I originally wanted Damon to sign, and ultimately settled with a baseball. I asked for the 2009 World Series inscription, and he also threw in his number! He has a long autograph (I barely captured it all in the picture), but the ball looks phenomenal! It's become one of my favorite signed balls in my collection, especially with the nice story to go with it.

Ever meet someone that you always enjoyed watching that completely blew you away? This was Damon for me. I always liked watching him play for the Yankees because he always gave his all and could do all sorts of things with the bat (side note: Ellsbury reminds me a lot of Damon), but after meeting him and talking to him for a minute, he became one of my favorite players! I wish some team could give him a chance like he's been asking for, because I believe he's right by saying he could produce more off the bench than a lot of guys have been. Even at 40 years old, if Giambi still has a job, Damon should too.

Thank you so much Johnny for being so great to my Dad and I and giving me an autograph I'll always cherish! Have a great day everybody!