Two More for the Mantle!

Hey guys, Drew back here! After a day and a half long adventure in upstate New York visiting a few colleges, I'm back here to complete my recap from last Sunday's card show! Meeting all of the old Pirates players was really awesome for me, but that wasn't the main reason I asked Dad to go to this show. I hadn't added to my Mickey Mantle multi-signed photo in a few months, so with two of his former teammates signing I wanted to take advantage of the opportunity! 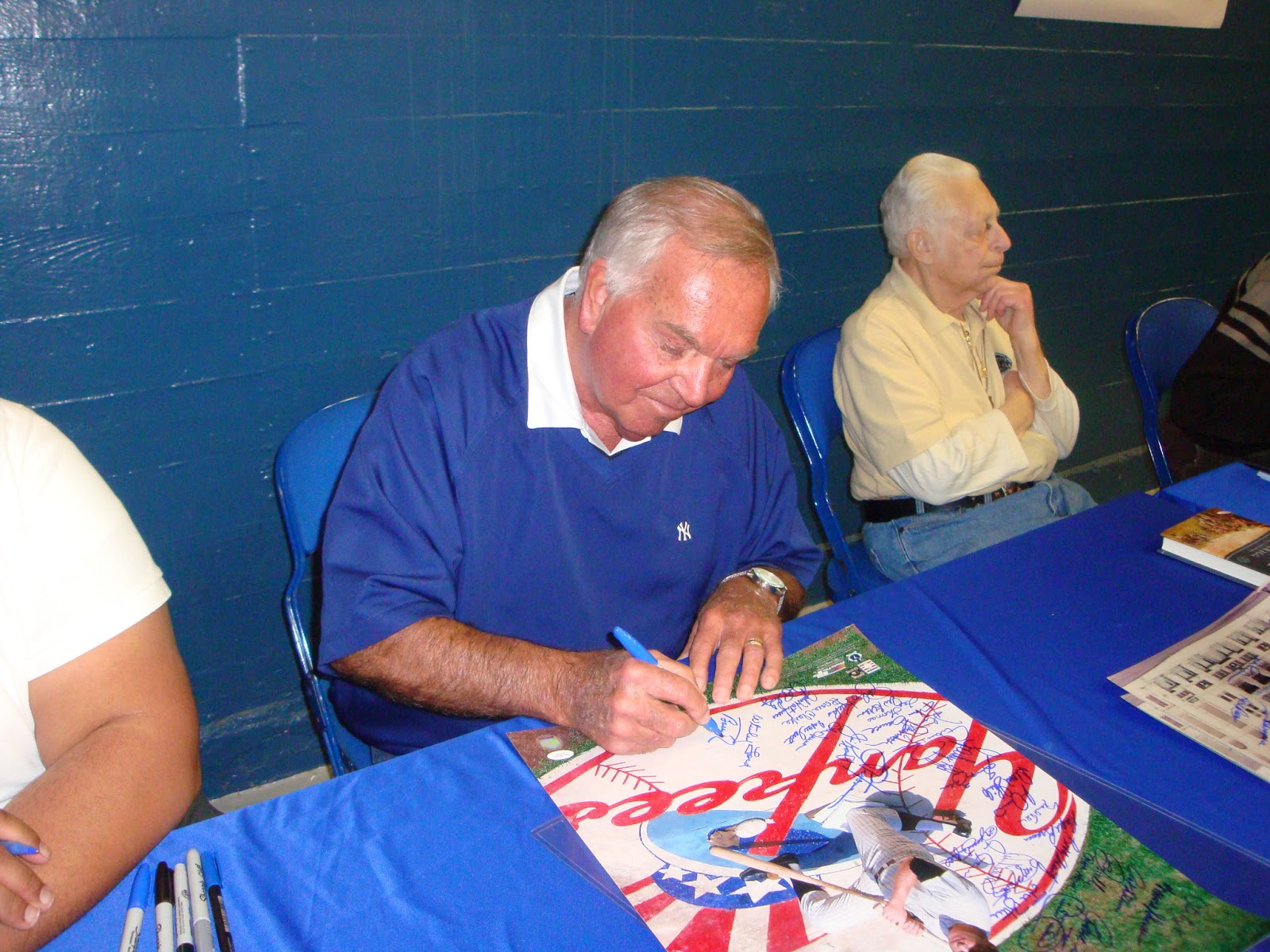 First up was former All Star second baseman Bobby Richardson! Richardson was one of the best all around players in the league back in the late 50's and early 60's, so I was excited to add him to the photo! Known exclusively as the only player to ever win a World Series MVP on a losing team, Richardson also won 5 Gold Gloves and made 8 All Star teams. He happily signed the Mantle photo directly below the Chairman of the Board, becoming autograph #37 on the picture. 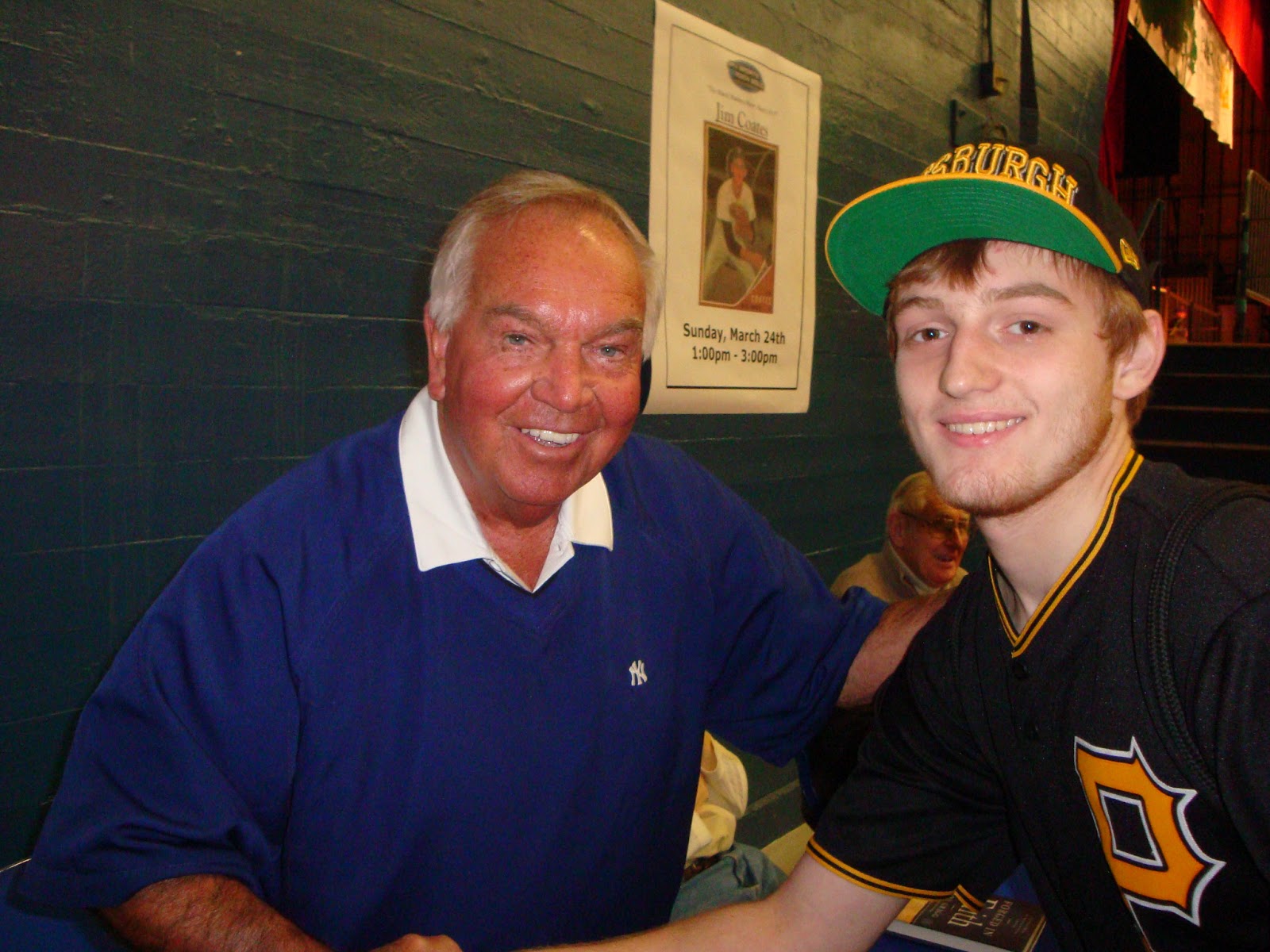 I felt bad because with my Pirates gear on, Bobby would never know I was a Yankee fan. Hopefully the signed Yankee photo spoke for my true allegiance, but he obviously assumed me to be a Bucs fan. However, it didn't take away from the experience, as he was a very nice guy and posed for a nice picture with me! 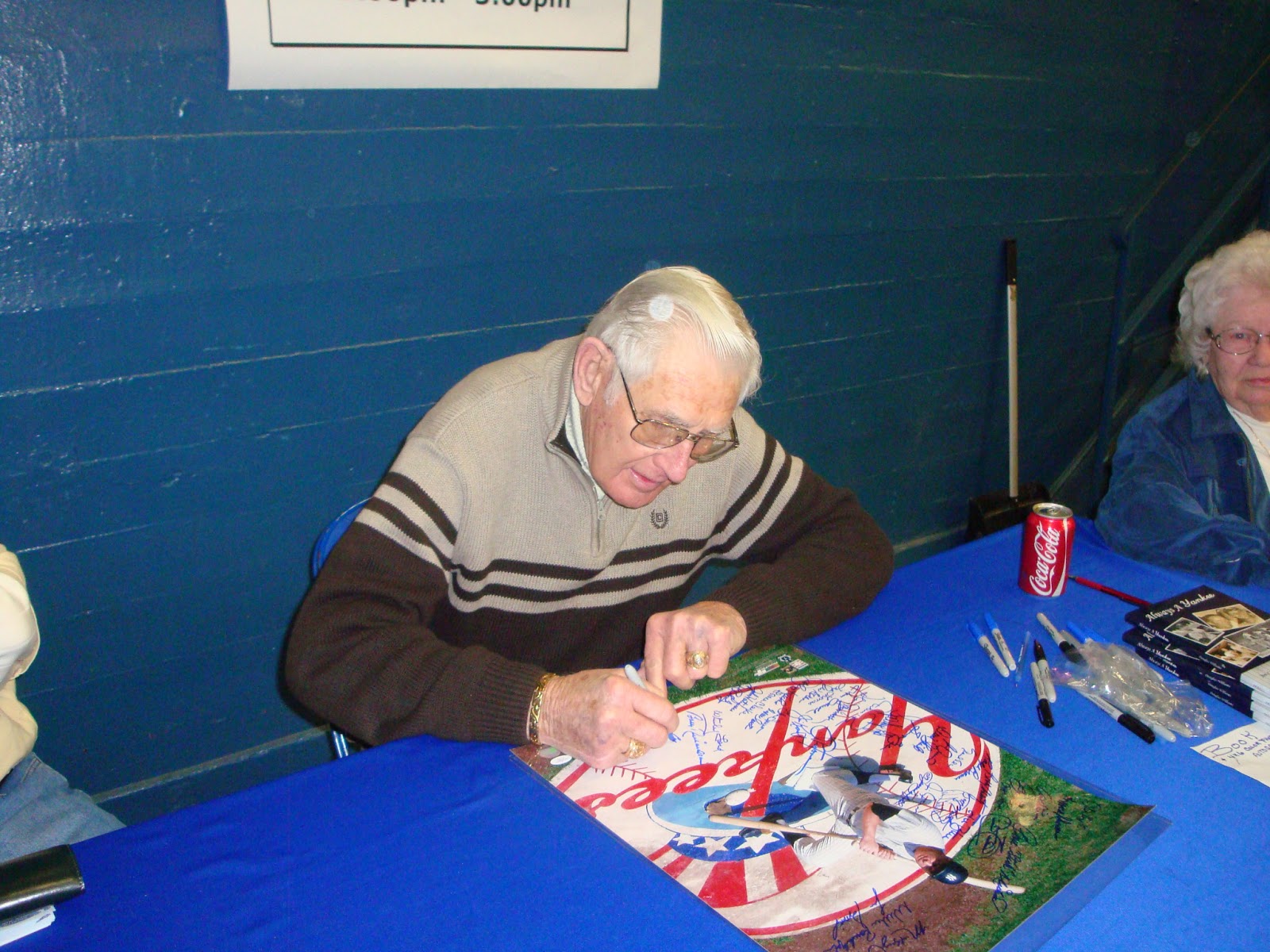 The 38th autograph on the photo went to former spot starter and reliever Jim Coates! Before the show, I'd never heard of Mr. Coates, but after researching a bit I learned that he was actually a pretty good pitcher! In 1960, Coates went 13-3 with a 4.28 ERA, and if it weren't for several injuries he could've had a much more successful career. He gladly signed right below Richardson, which would've upset me if he wasn't one of Mantle's teammates. The spot Richardson signed I wanted to reserve for Berra, but the likelihood of getting Berra is getting slimmer and slimmer by the day. I'm glad these 2 guys took those spots though. 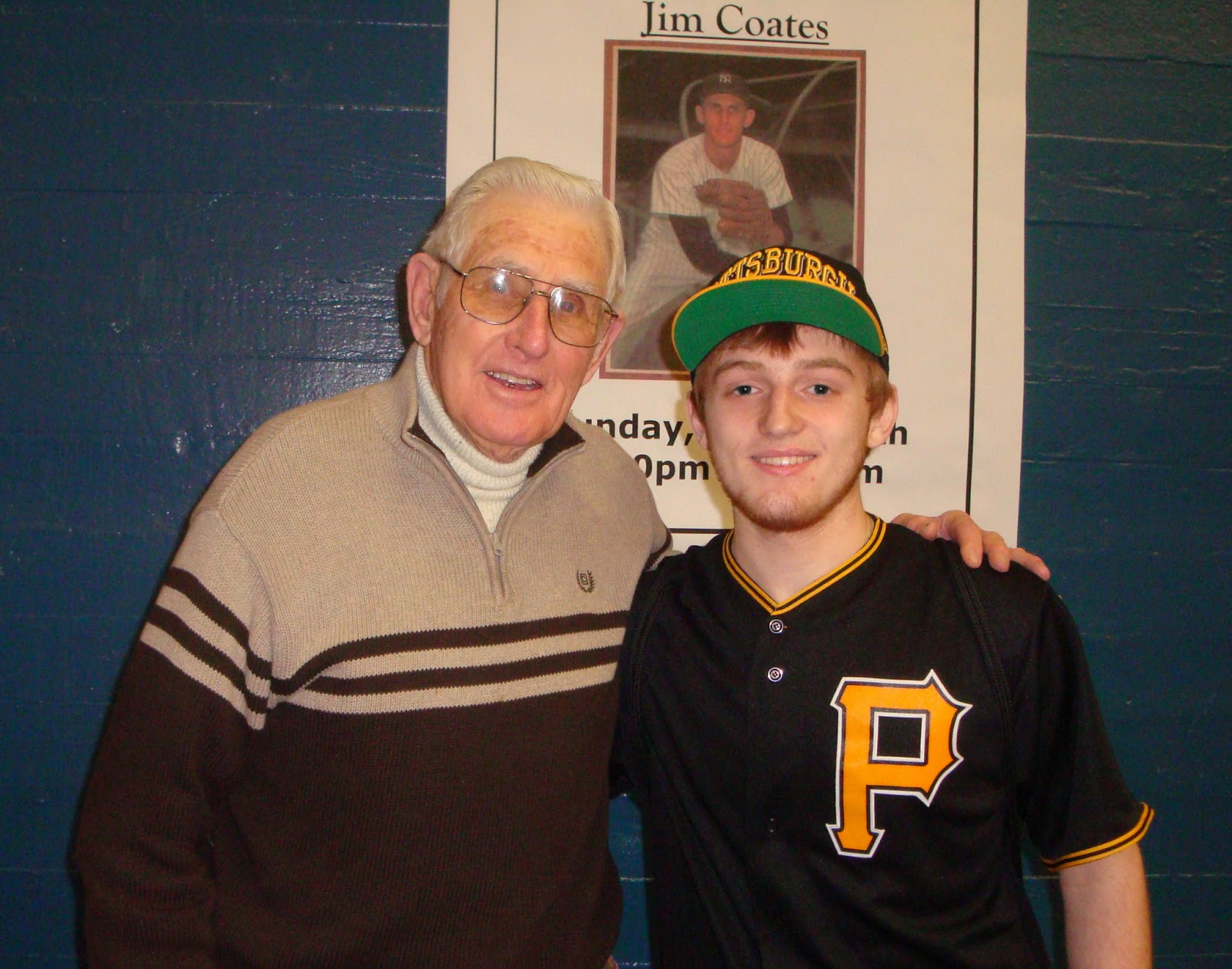 Coates was also a very nice guy. He charged $20 for an autograph, so not many people took the plunge on him unless they needed him for a team signed item. His wife (I assume) was with him trying to sell his autobiography, and she almost convinced us to buy it but I knew I probably wouldn't have much time to read it. 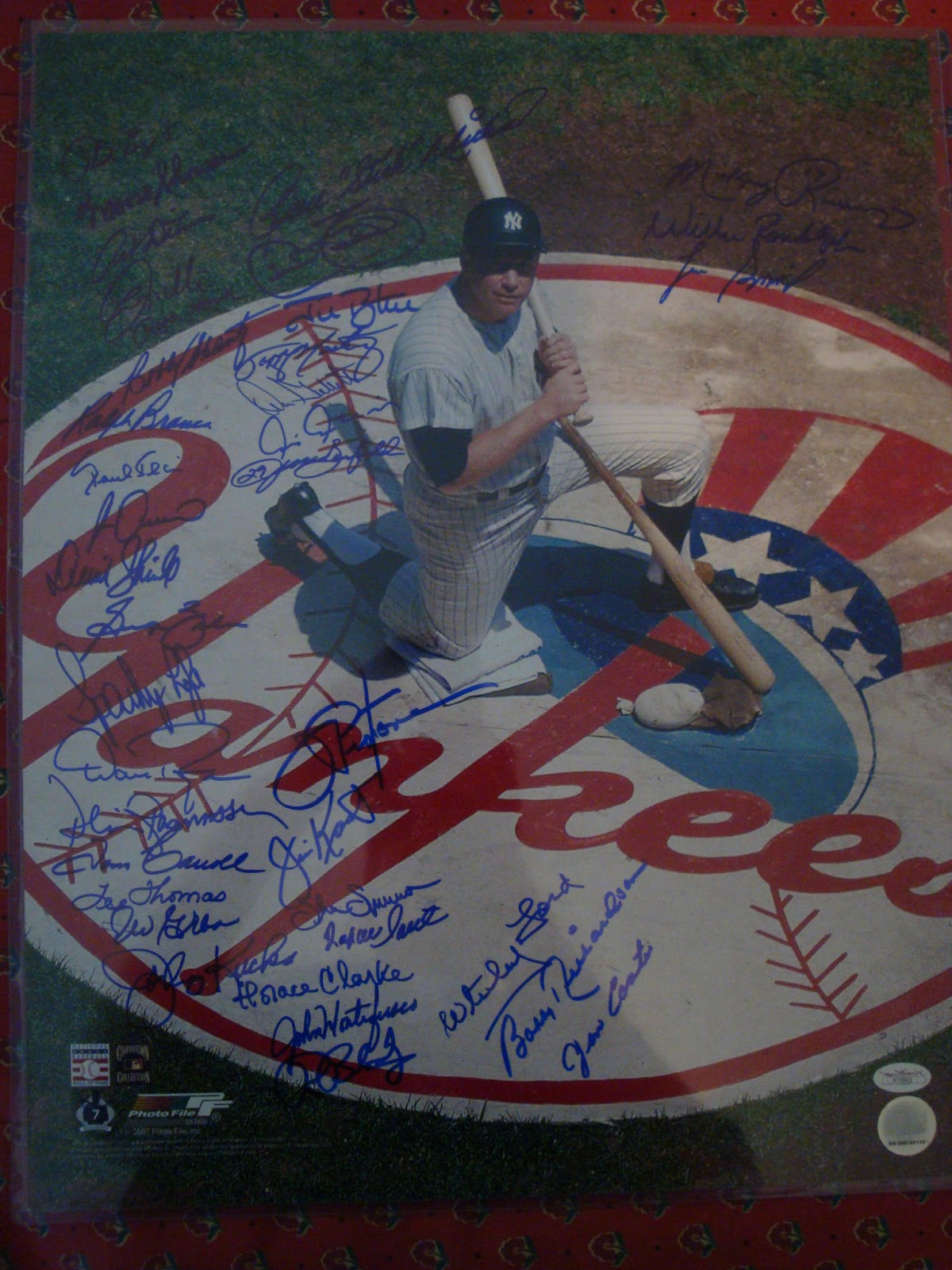 The autographs look pretty good (below Whitey Ford towards the bottom in the center), although they signed on angles like Ford did. I'm not sure how that will affect the rest of the signatures on there, but I'm sure if I load it with a lot of other signatures it won't matter in the slightest. A guy in line for one of the signers was talking to me about the piece, and suggested when it's done to save up for a Mantle cut autograph to mat below the photo. I thought it was a smart idea, but it won't be very cheap.

What do you guys think? Would it be worth doing? Thanks in advance, and also thanks again to Dad, JP's Sports, and all of the great signers!