Hey guys, Drew back here! As I mentioned yesterday, I met a solid group of players at last weekend's JP's Sports March Madness card show! First of all, a big thank you and shoutout to the guys from JP's Sports for doing a great job as always! When I look back on my early days in the hobby there's no way I could ever forget my experiences meeting so many legendary players. Although I met 6 former players that day, I've shaken all but 3 of their hands in the past. I'll explain further in a minute. But, to kick things off, I jumped on the free signer's line early because those lines always seemed to grow quickly. Not many people seemed to be in attendance that day, as the show was relatively quiet. But nothing is worse than being stuck in lines for hours! 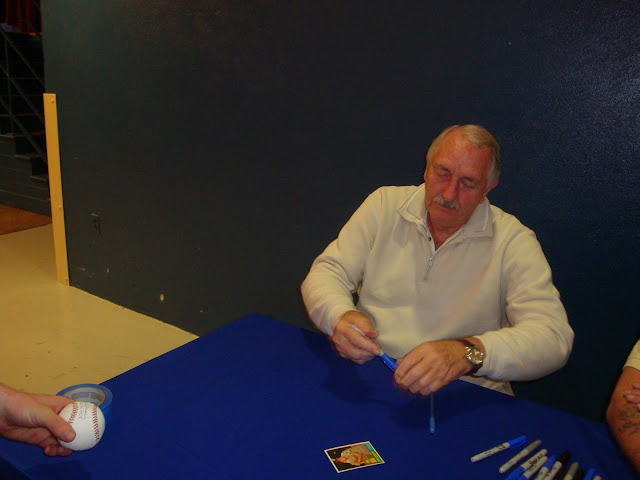 This show's free signer was former Orioles' Rookie of the Year Ron Hansen! Hansen battled injuries throughout his prime and later career, which severely impacted his opportunity for success in the big leagues. However, the 6'3 shortstop had a great rookie year, batting .255 with 22 home runs, 86 RBI in the lower half of the O's lineup. He made both All Star teams from the season, but never was the same player. 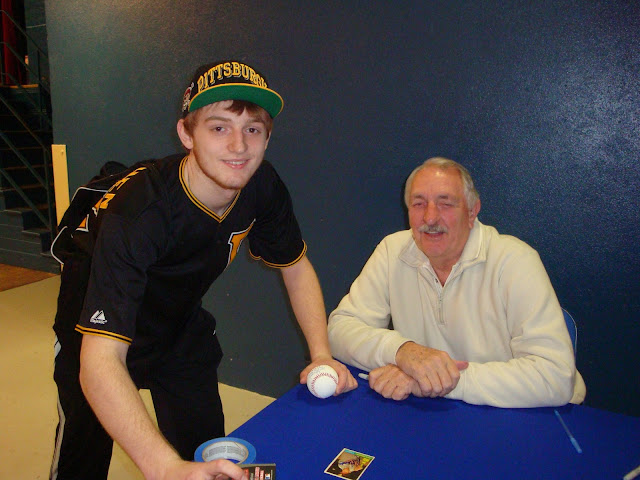 Hansen was a real nice guy, signing a ball for William for me, as well as a 1961 Topps for my collection! He assumed me to be a big Pirates fan, judging by my McCutchen jersey and Pittsburgh hat, so he asked me if I was excited to meet the Pittsburgh players signing. Of course, as you all know, the Pirates are my second favorite team but I don't love them nearly to the extent that I love the Yankees. Hansen posed for a picture and I was off on my way to meet some former Bucs. 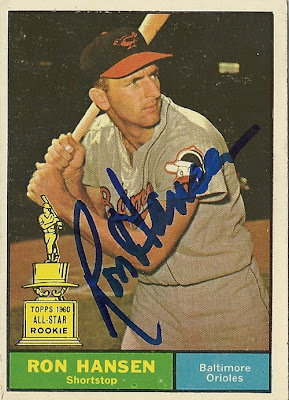 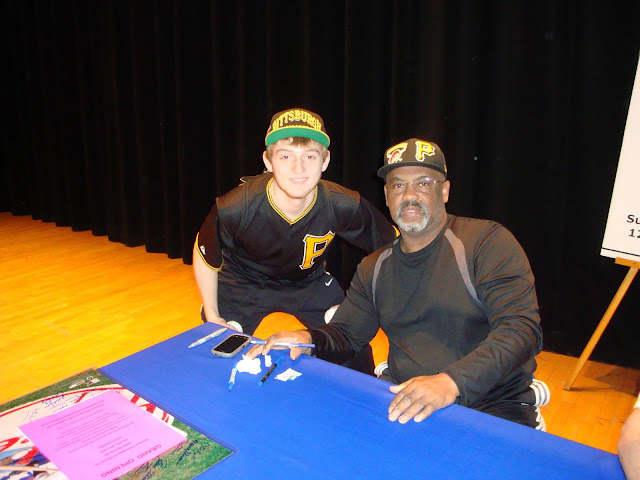 The first of three Pirates I visited that day was 4 time batting champ Bill Madlock! I've met Madlock along with the following two players at my first White Plains show back in the summer of 2009, and he was a fairly nice guy. I believe he signed for free that day, however Sunday he charged $15 with a free inscription. Last time the "Mad Dog" had a clean look to him, which was uncharacteristic for a 70's Bucco. This time around, he was sporting a beard and the New Era Pirates hat. He didn't say a whole lot, similar to the last time I met him, but he signed my ball and posed for a picture. 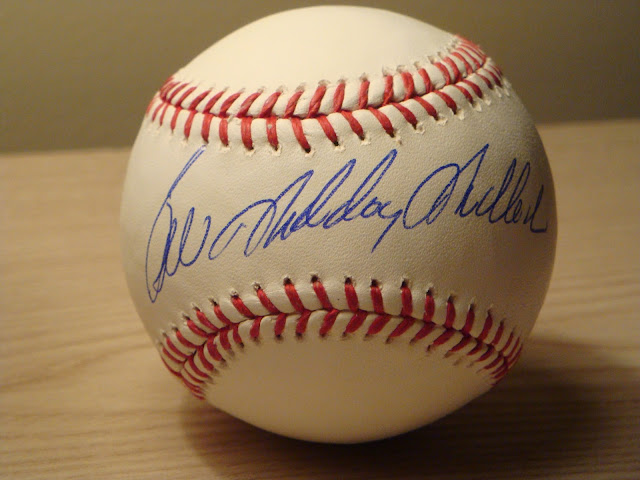 I figured that I should take advantage of the free inscription, so I got him to add "Mad Dog" in between his first and last names. He has a clean signature, but it isn't exactly easy to read. In my ball display area, he'll be placed right next to the Crime Dog, Fred McGriff, to make for a pair of tough dogs you certainly wouldn't want to mess with during their primes. 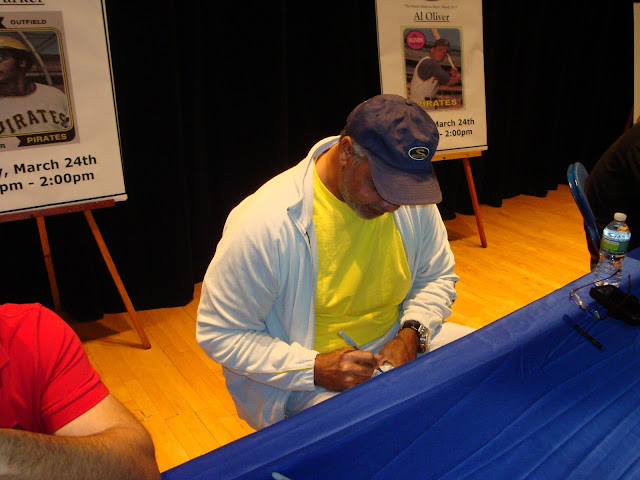 Next up was a player who ended up becoming one of my favorite old school players following the first experience I'd had with him, Mr. Dave Parker! Parker had all of the tools, but never really used them to the fullest extent that he could have. Unfortunately, drugs and hysteria got between Parker and the Hall of Fame, because most people knew he had the potential to reach the hall. Dave looked good today; it appeared that he lost some weight since last time, and he was really friendly as usual. 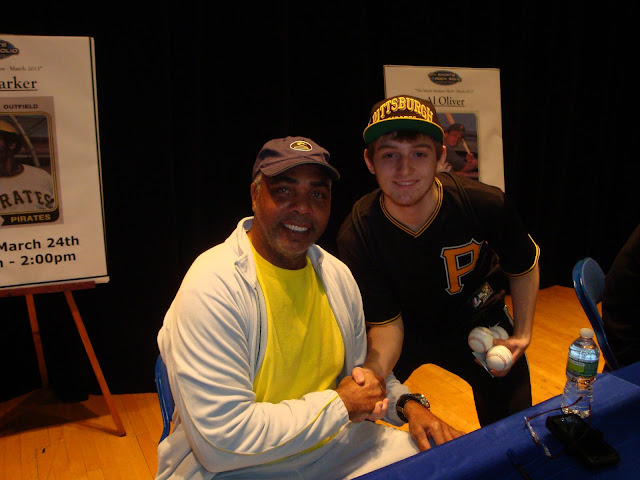 He signed my ball, and I asked him if he could put his "Cobra" nickname on it. He replied "how did you know about that nickname?", and I told him that I didn't know, and that I made it up. He laughed and then told me his trainer gave it to him because his batting stance was coiled. He started writing Cobra on the ball, and then below it he continued to inscribe it. I wasn't sure what he was doing until I looked at it a minute after I left him. 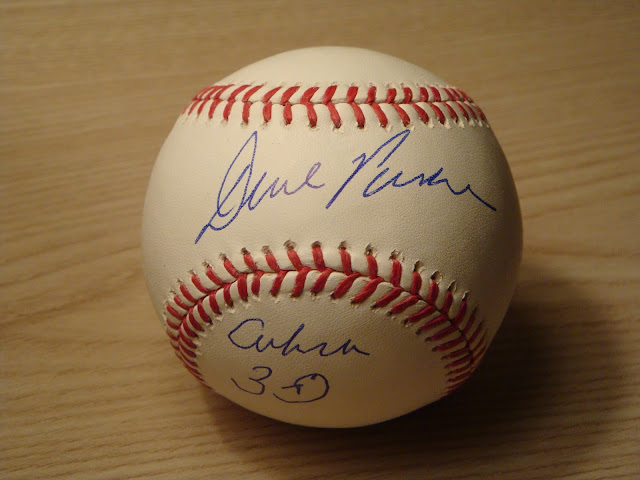 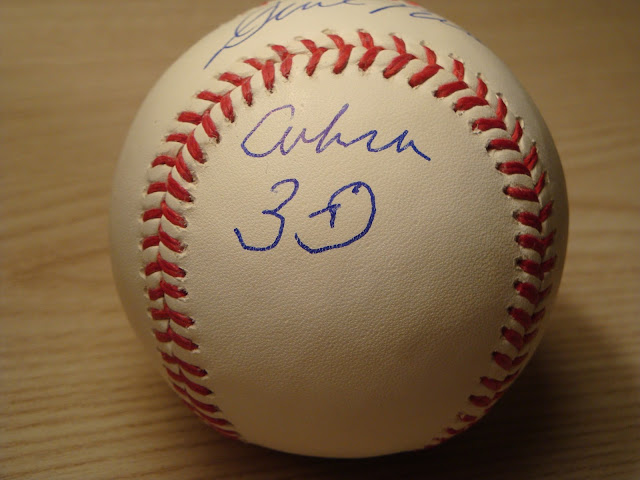 Below Cobra, he wrote his number 39, with a cobra in the shape of a 9! I don't normally shop for his memorabilia on eBay, but I checked later on to see if it was a commonality or if I was lucky. There were no balls like that currently on eBay, so for now I'll go with me being lucky! I wouldn't sell it, but it is really cool to think of how few people may have what I have throughout the world. Thanks to the Cobra once again for making my day! 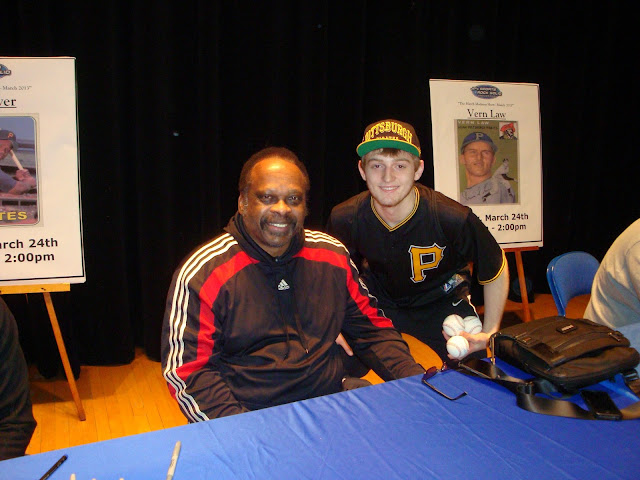 The final signer (for this installment of drewscards) was 2 time batting champion Al Oliver! Oliver was also a free signer back in 2009, but this time he was $15 per autograph with a free inscription, exactly like Madlock's. Oliver was friendly the first time and he didn't disappoint the second time, although he was shocked to see a New Yorker decked out in Pirates gear. "You a true Pirate fan, kid?" he asked me. "These jerseys aren't cheap Mr. Oliver," I replied, and he said "Now I hear ya on that man!" Always something interesting when Oliver is around. 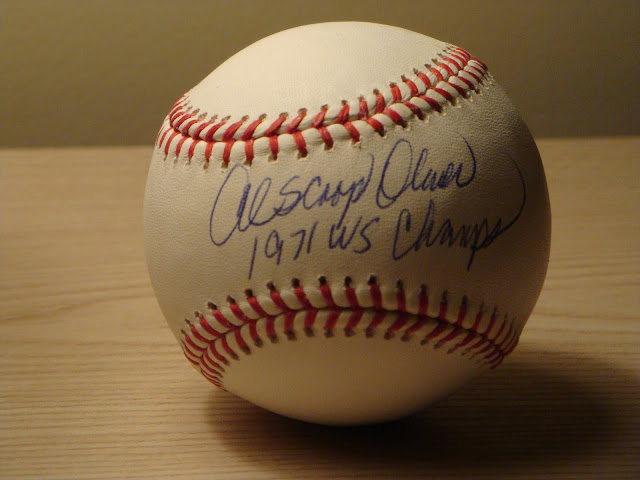 Oliver went above and beyond on inscriptions as well, signing his nickname "Scoop" and writing 1971 WS Champs below his name, which may be disheartening to you Orioles fans, but it is what it is. All of the balls came out spectacular, and I'm glad I added them all to my ever growing signed baseball collection!

That's not all though! Stay tuned for the final two players I got to add to my Mantle photo! In the meantime, go Pirates!