Hey guys, Drew back here! So, on Sunday, Dad and I took a quick trip down to White Plains! I didn't bring as much money as I usually do, but I still had a good time and got some nice deals. The main reason I wanted to go was because some personal favorites of mine were signing autographs, and I wanted to add them into my signed baseball collection. You'll get to see all of that tomorrow, but for now, take a look at what I was able to pick up! 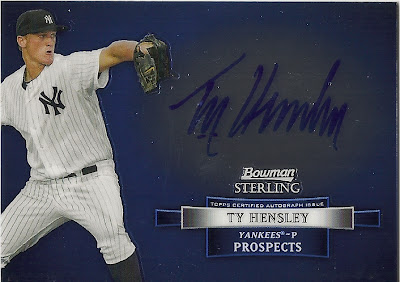 A little while into the show, I found a younger guy selling a bunch of prospect and star autographs, which is usually what I look for at these shows. Over time, I've composed a list of my Top 100 favorite players, and my goal is to eventually have an autograph of all of them (I have 66 of the 100)! However, this Ty Hensley autograph from the new Bowman Sterling stood out first to me, since I had the refractor version already. He wanted $8 for the card, which was a bit much for this one for me, so I tried to see if he could work with me. 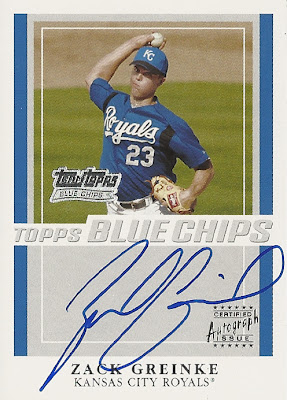 I then saw this sweet Zack Greinke autograph from 2004 Topps, and decided to ask the price on it. He said it books between $20 and $30, but then said he'd give me the two cards for $20! I couldn't pass up that offer, as Greinke had been an autograph on my list for a while now. However, I decided to keep looking and make sure there weren't any other cards I wanted. 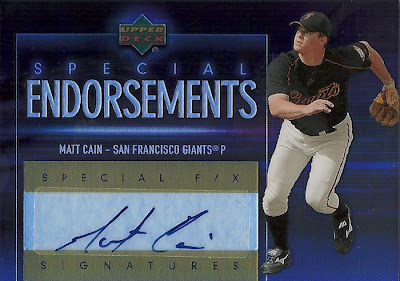 Well, there was one more, this sweet 2006 Upper Deck F/X Matt Cain autograph! Again, I inquired on the card, and he said it books around $30, but he'd give it to me for $10! I hadn't seen a Matt Cain autograph for around $10 in ages, so I pounced at the 3 for $30 offer he gave me! Cain and Greinke were two of the top pitchers I've wanted, so it was awesome to knock them both off in one swing. I don't believe that Greinke is deserving of the fattest contract for a right handed pitcher ever, but I guess he showed up to free agency at the right time. 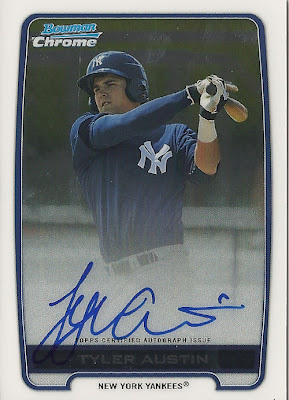 Then, Dad & I went to a table ran by two girls that usually have the nicest new cards in the building. They have all sorts of rare 1/1's, printing plates, and parallels of prospects, you know; the stuff all out of my price range. However, they also had some mid-end stuff, including this beautiful Tyler Austin Bowman Chrome autograph! Austin's prices have skyrocketed since he became the Yankees 2nd best prospect according to many lists, so I've had a hard time getting a hold of this one for a solid price. Fortunately, I paid $30 for this one, which is certainly fair according to eBay value. The last time I spent $30 on a prospect autograph it was of Manny Banuelos, who proceeded to get injured directly after the purchase, crushing his stock. Hopefully that doesn't happen this go round. 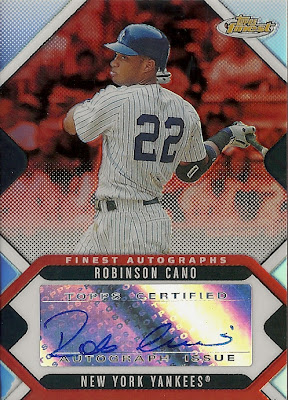 My Dad decided to treat me to a sweet card also from the same girls, this 2006 Topps Finest Robinson Cano autograph! I can never add enough autographs of my favorite semi-affordable player, and Dad understood that by helping me out here. Now the 9th Cano autograph in my collection, this one is up there as one of the shiniest (go grammar!) of his that I own. However, this is already an old autograph in my Cano collection... and you'll see what I mean in a few days. 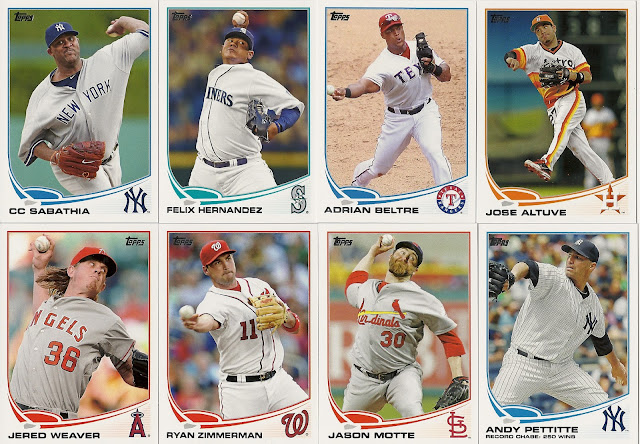 Before Dad and I left the show we also picked up a jumbo pack of 2013 Topps! I haven't gotten to open any of it yet but made it a priority to do so at the show. I really like the design, and I think a lot of them would look great signed TTM. I counted about 8 cards in the 50 card pack that will probably be going out in the mail once the season starts, so hopefully I'll get a few of those back as well. It's amazing to see how clear and visually appealing Topps' flagship products have gotten over the years. I'm definitely impressed, even though I'm not exactly a huge Topps fan thanks to their poor customer service. 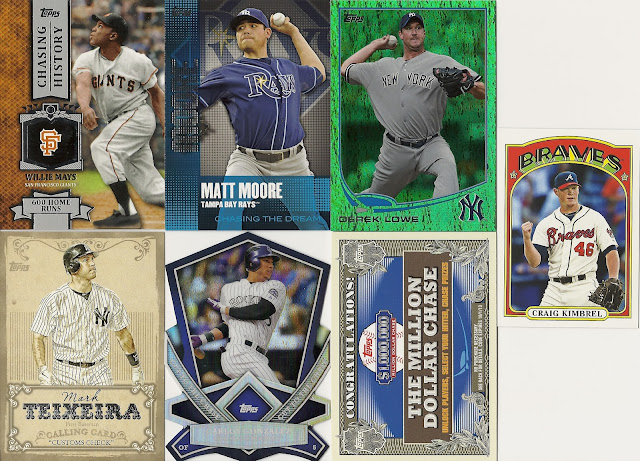 Fortunately, I did awesome on the inserts, although I didn't get a hit in the pack. I don't think I'd trade any of these, except for the Lowe emerald which will probably go towards William's set chase. By the way, if anyone has any of those emeralds laying around, be sure to go check out his blog and see if you can help with his daunting task! Final thoughts: the Calling Cards seem pretty pointless but I love the die-cuts and '72 minis! I tried the Million Dollar Chase and it is pretty lame. If anyone wants Desmond Jennings (who went undrafted in my 8 team fantasy draft) for their Topps team let me know.

Thanks again to Dad for taking me to the show and for the Cano! I've got a whole lot of awesome things to come; be on the lookout! See Ya!
Posted by Drew at 11:44 AM