Hey guys, Drew back here! Recently, I found some extra time in my schedule to write out a few TTM requests, and the first of those 5 came in on Friday! I sent each of the 5 people an 8x10 photo to sign, which costed a lot to ship, but could yield some great results. To go along with the shipping costs, this success below required a donation, so you can easily see how quickly the costs tend to add up. However, I think we can all agree that $20 + shipping fees was worth the price for this piece: 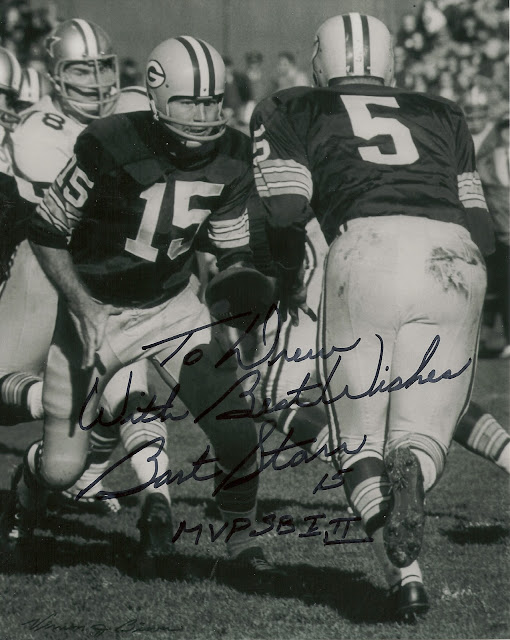 Bart Starr, the first and second Super Bowl MVP in NFL history, signed this beautiful black and white photo for my collection! I've been meaning to send to Mr. Starr for quite some time now, as this photo was sitting around collecting dust for about half a year! I feel a lot better about it with his large black, bold signature resting upon the tremendous photograph taken by Vernon J. Biever. I never noticed Biever's signature in the bottom left hand corner of the picture, and to be honest I had no idea who he was when I finally noticed it. I did a little research however; and it turns out that Biever worked as the staff photographer for Green Bay, and was even elected to the team's Hall of Fame for his achievements! You can check out a website commemorating his career here, if you're interested in seeing more of his pictures.

Mr. Starr certainly came through clutch with my photo, returning it within a week with a great "To Drew, With Best Wishes, Bart Starr 15, MVP SBI, II" inscription! I asked for the Super Bowl inscription in my letter, and he obliged. It's not every day as a collector that you get to go around showing off a nice new Hall of Fame QB piece in your collection, so this one will be on display around the house for a little while (until my mom gets sick of me laying it all over the place).

Starr played from 1956-1971, all for Green Bay, making one of the longest tenured quarterbacks with 1 team in football history. He made 4 Pro Bowl teams, and was the 1966 League MVP. NFL.com ranked him as the 51st best player to ever take the field.

What do you guys think of the highlight of my football collection? If you haven't gotten Starr yet, $20 is a steal, so I would certainly consider getting him while you can! See Ya!
Posted by Drew at 7:19 PM