Some Unexpected Amazing Pickups from Dad!

Hey guys, Drew back here! So, about last week, Dad found a few deals at an antique shop. He came home with 5 cards, and I'll let them do most of the talking, because well, they are some pretty darn good ones to have! 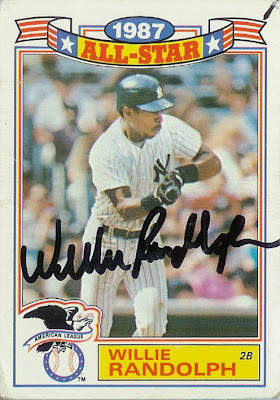 First was this 1988 Topps Willie Randolph autographed card! Of course, this is an IP autograph pickup, and I don't know how legitimate this one is, but it looks good and the autograph looks sweet on the card! I don't have too much of Randolph other than my signed baseball of his, so it's cool to add this one to the collection! 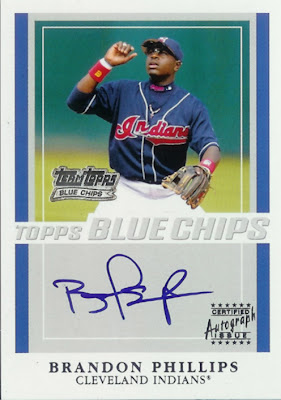 Second was this 2003 Topps "Blue Chips" Brandon Phillips rookie card autograph! Phillips was one of my most wanted autographs of MLB's current second basemen, only behind Rickie Weeks in terms of who I don't have yet. Phillips has definitely been one of the best second basemen in the league for a few years now, and last year he posted a .300 batting average with 18 home runs and 82 RBI. I would take that in a second baseman anyday, but fortunately enough my Yankees have even better with Robinson Cano! 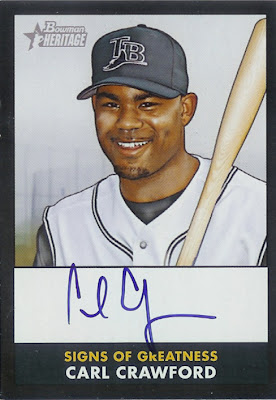 Well, it started off good, which I means it could only go down! From 2007 Bowman Heritage, here's a Carl Crawford black parallel autograph numbered to only 52! Crawford sure did have a disappointing year in Boston, but boy was he good for my fantasy team two years ago when I went on to win the championship! I'll always have a bit of a soft spot for my 2010 2nd round fantasy pick, but I sure wish he never signed with Boston! Regardless of that this card is pretty sweet looking, and while I probably will end up hanging onto it, I'll certainly take offers for it in exchange for any Yankees autos you're willing to lose!
So now we're down to the final two. Let me tell you it sure was difficult to choose which one to write about first, but I guess I had to save the autograph I didn't have yet for last! Both cards book for close to $100 if not more, and are certainly huge additions to my overflowing population of cards in my basement! 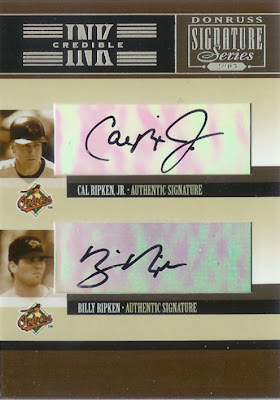 We start with the Ripken boys! Out of the 2005 Donruss Signature Series product, this dual autograph of Cal Ripken Jr. and Billy Ripken is a beautiful card, and it definitely made my day! Cal is one of my favorite players in the Hall of Fame, just because he's just so classy and memorable, and will always be perhaps the biggest class act to ever play the game. The fact that he stayed and signed an autograph for every fan after the Orioles' games was remarkable and unheard of in the sports world filled with money and greed. I do have Ripken's autograph in his children's book I picked up off of Barnes & Noble, but this one is just a really sweet card in general. I didn't have a Bill Ripken autograph, but I'll always know him for his awesome 1989 Fleer card, and not for his mediocre career as a player and analyst on MLB Network. 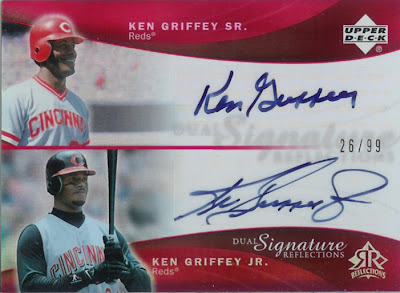 The final card, is a very classy card as well, out of the 2006 Upper Deck Reflections product. It's a dual autograph of perhaps the best father-son combo in baseball history, Ken Griffey Sr. and Ken Griffey Jr.! I have always wanted to pick up an autograph of Junior Griffey, as he's by far one of the greatest players of our generation. It was great getting to see him play, even though I wasn't really around much during the good times of his career. He retired with 630 home runs, all of which had not been surrounded by the questions of steroid use that majority of the players of his time used to get an edge. Sure, we may never know if or not Griffey did use the roids', but I highly doubt he did. Dad also recently got me an autograph of Griffey Sr. pictured in a Yankees uniform, so it's kind of cool to have one as a Red too. Upper Deck designed this card really well and it just is great looking in person, numbered only 26 of 99!

Thanks so much Dad, seriously I appreciate this so much. High school can really be a drag sometimes but its you and so many of my other great friends that know how to put a smile on my face!