Hey guys, Drew back here. Yes, I am still posting stuff from October 1st, which was indeed 10 days ago. I guess that just goes to show how amazing these White Plains shows are for a young collector like me! On to Part 5 of the 6 part review!


PART 5:
MEETING THE LAST
30 GAME WINNER!
Aside from the Jets' greats we met (see my last post), we also met the free signer of the day! I didn't prepare anything for him because, with his recent legal troubles and arrest, I figured he wouldn't be there. But, he was, after they dropped charges for his recent fraud situation. This guy won a combined 55 games between TWO seasons in the late 1960's, being one of the most dominating pitchers in the game at the time. He helped lead his Detroit Tigers team to the World Series in 1968, by winning not only a Cy Young award but an MVP as well! If you don't know by now, this was the story of Denny McClain, one of the most forgotten former greats in the history of the game! 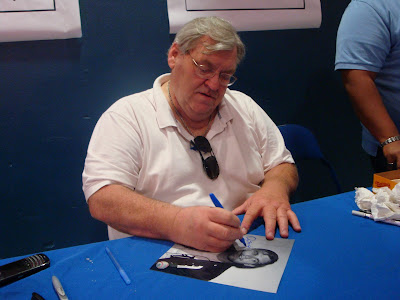 Minus his legal and post-retirement legal issues, McClain seemed like a pretty cool dude. When we were meeting him he checked to make sure I paid for my inscription because according to him the "a**hole promoters" got on his case for signing an inscription for someone who didn't pay for one prior to meeting him". He was pretty funny, although I was a little intimidated meeting a felon. And he was a big one at that! 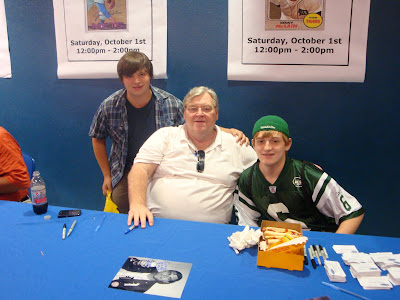 It's not like I haven't been used to meeting ex-convicts in my life. Just at White Plains card shows, I've now met Dwight Gooden, LaMarr Hoyt, Dave Parker, and just minutes before McClain, Mark Gastineau. Not one of them has been a jerk, in fact they all were very nice people. It's nice to have players try and turn their lives around by giving back to the fans. 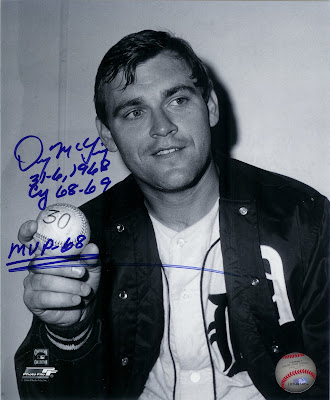 I was overly impressed with the way my signed picture came out! I asked just for his record in 1968 and the Cy Young inscription, but then he went ahead and threw in the MVP 68 inscription as well! I also found the huge scribble under the inscription pretty cool, and it makes for a cool piece of memorabilia.
Overall, I'm pretty glad I didn't pass up on meeting Mr. McClain. This autograph is certainly a unique one to add to my collection, and if I could get a signed picture similar to this by Justin Verlander it could make for an incredible piece!
See Ya!
Posted by Drew at 6:34 PM