Hey guys, Drew back here. Luckily enough, the last few days' workloads were not heavy at all, so I've got a little extra time on my hands to catch up. Following my card show review there may be a contest, so stay on the lookout for that! We'll now move on to part 2 of the show review, which will contain all of the other big "hits" I picked up there! Let's get it started... 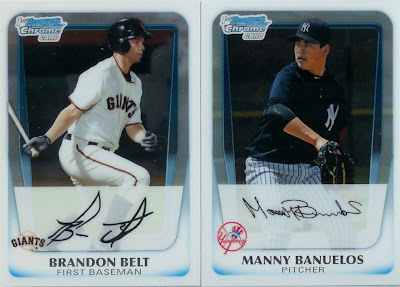 We'll start with these two chrome prospects out of 2011 Bowman! I spent quite a bit of time searching through this one vendor's boxes of cards, because he had all sorts of newer inserts/prospect cards/parallels in there for a dollar a card. I took five of them off of his hands, one being the Bowman's Best Cano insert in the previous post. Next I got these 2 rookies, of Giants top prospect Brandon Belt, and Yankees pitching prospect Manny Banuelos. I got the Belt just for the heck of it, and the Banuelos because I didn't have much of him in my Yankees collection. I have a feeling he's going to be a good one! 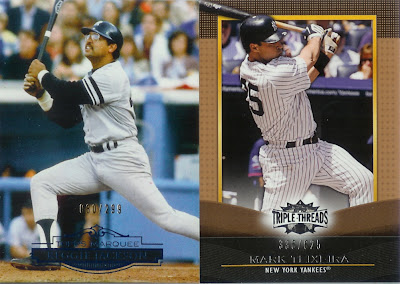 The other two were out of Topps' newest high end products, Marquee and Triple Threads. Marquee is new to the hobby this year, and reminds me a lot of Stadium Club with the crisp and colorful photography taking up majority of the card. This one was of Reggie Jackson, and is the blue parallel numbered out of 299. As for Triple Threads, well, it's been Topps' most popular high end product for years now, and this year is no different. The cards don't tend to change much in design every year but with the new checklist additions and combinations it's always a risky but fun break. I got the Mark Teixeira gold parallel numbered out of 625, and it's a pretty nice card for sure. 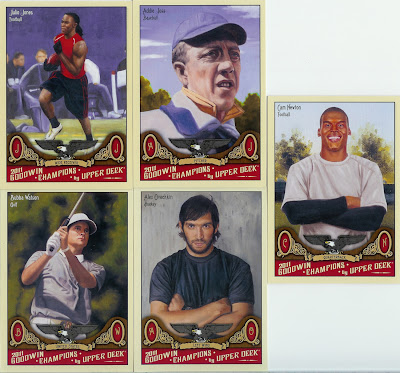 Next, I broke one pack the entire show, of the new Goodwin Champions product. Why? I have no idea, but I was hoping for something different, and I definitely got just that. First though, I did pull two sweet football rookies, of Cam Newton and Julio Jones! Those ones are going to stay in my collection for a while. Also, a very uncommon player I pulled was Addie Joss, a Hall of Fame pitcher whose 1.89 career ERA is the second greatest of all time! 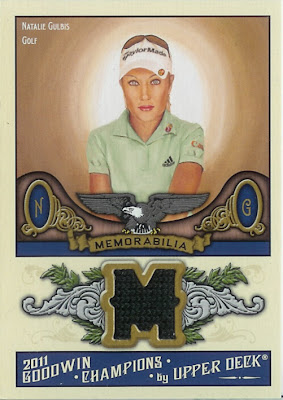 Then, Goodwin got weird on me. Here is a memorabilia card of female golfer Natalie Gulbis. See, this card is one of many reasons why I don't pull a whole lot of packs anymore. Then again, the pack did state that it was mixed sports. Well, if anyone is interested in the card, send me an email. 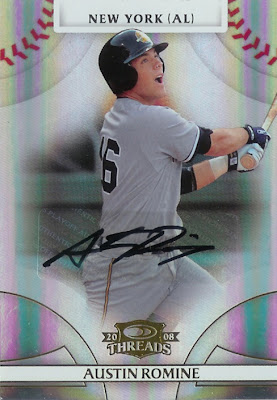 Moving along to the better stuff, here is a 2008 Donruss Threads autograph of Yankees catching prospect Austin Romine! Romine got a cup of coffee this September, playing in 9 games total. He had 3 hits in 19 at bats, but it was nice to see him up in the big leagues, because I'm sure he'll have a spot within the next couple of years. I bought this card along with the next card for $25 in all, and I think it might be a pretty good gamble. 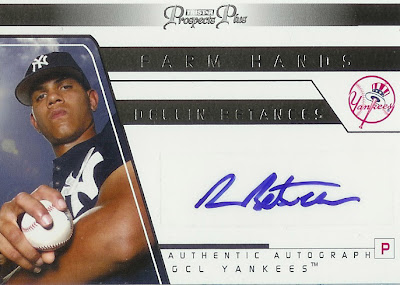 The other card in that group was this 2006 TriStar Prospects Plus "Farm Hands" autograph of Yankee rookie Dellin Betances! Betances, along with Romine and a few others, got to play this September with the big boys. He pitched in two games, one in which he struggled to the extreme in two thirds of an inning, and the other in which he started and threw 2 scoreless innings. Of course, I have no idea what the future will tell for Betances, but he definitely has the stuff to be a possible fourth or fifth starter very soon. This card isn't overly exciting but it was the best I could do in terms of his already fairly expensive autographs. 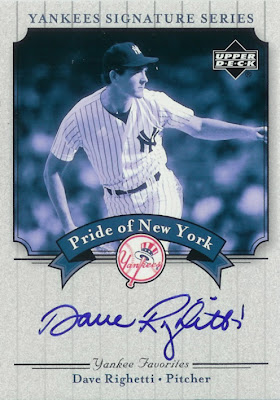 The next four cards were all part of a five card purchase Dad made from my favorite vendor Hunter at the show. He always has a bin sitting around with relics/autographs/vintage all half price, which makes the deals even better. In the past Mike and I have bought some beautiful patches and autographs off of him, and I always like to see him at the shows. The first of the four cards Dad got was this 2003 Upper Deck Yankees Signature Series Dave Righetti autograph! The first thing that caught my eye when I saw this was that Righetti has a beautiful autograph! I never watched much of Rags but he was a solid player throughout the 80's, and it'll go well with the other autographs I already have in the set (Winfield, Mazzilli, Cone, Sieburn). One day I might try to get this entire set. 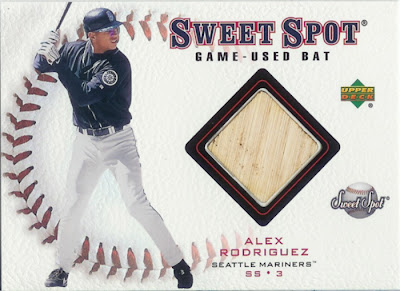 Card number 2 was this 2001 Upper Deck Sweet Spot bat card of Alex Rodriguez. A-Rods been nothing but a disappoint this season, and to be honest; with the injuries he's faced in the past couple of years; for the price we paid for him he just hasn't been worth it. I've never been a big fan of his, simply because I've heard many annoying stories about him blowing people off for autographs and charging ridiculous prices for autographs just to add even more money to his insanely huge wallet. So far he's 0 for 10 in this insanely disappointing ALDS, and I really hope he can regain his form tonight to help us stay alive. Nonetheless, it's definitely a cool looking card. 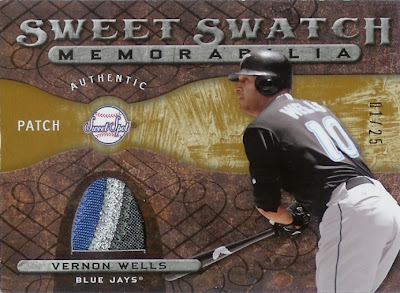 Talk about a card that jumps right out at you! This card looks awesome! Numbered only 1/25 from 2009 Sweet Spot, it's a Vernon Wells 3 color patch with a whole lot of stitching. I just love cards like that. Sure, I'd rather have an entire jersey but when the card companies do patches right, they look outstanding and have an incredible appeal to collectors! This card is tradeable but I'd be looking for something nice for sure. 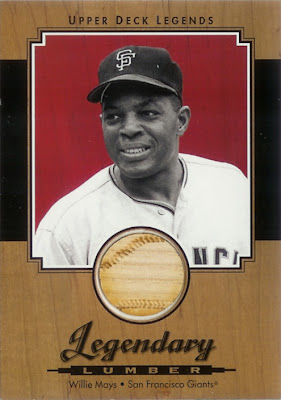 The last card Dad bought from Hunter was this 2001 Upper Deck Legends Willie Mays bat card! This card is so awesome! It's really cool to own any piece of memorabilia from a player of Mays' caliber, even though this one is awfully small. I love how the bat chip has the baseball seams etched into it, although many people may think it's hurting the pieces even more. Personally, I think it's cool enough that I get to own a piece of Willie Mays' bat, and I want to thank Dad for giving me that opportunity to, as well as for the other cards you bought for me! 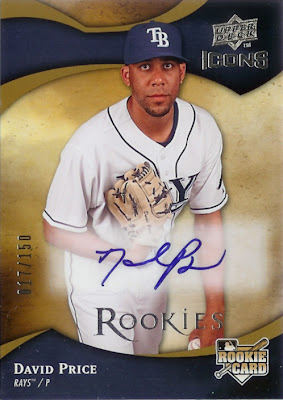 These last two cards were two of my more expensive pickups, the first being a 2009 Upper Deck Icons David Price rookie autograph. While James Shields dominated the Rays pitching categories this season, with an overwhelming 11 complete games, Price is definitely one of the more established pitchers in baseball. To say 2011 was an off year for him definitely makes sense, and was shown last night when he gave up 4 runs and struggled in the Rays loss to the Rangers. Regardless, I'm hoping for a bounce back year out of David next season, and wanted to get this one at a lower price while I had an opportunity to. It's a sweet looking card for sure, although the autograph is on a sticker. 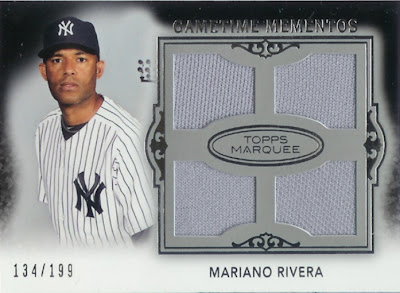 Finally, I saved this one for last because this guy is good at closing it out! Nothing better than a 2011 Topps Marquee quad relic of Mariano Rivera! I had a choice to make towards the end of the show, either to buy this card of Rivera, without patches, or an A-Rod card with patches. While the A-Rod may carry more overall value over time, I went with the Rivera simply because I'm happier to own it than I would be with the A-Rod. Sometimes its hard to remember that even though we all invest a ton of money into this hobby, you need to find ways to keep yourself happy, and there is nothing better than a beautiful looking card of one of my favorite pitchers in baseball history.

So, that'll do it for today's part of the show review. I sure hope I get to see more of Mariano tonight, perhaps closing out the game for AJ Burnett, bringing the Yankees back in the series? I know, it's unlikely, but it's always good to dream!