The Most Recent Package from William!

Hey guys, Drew back here. Yes, I'm still alive. Laziness is definitely the worst disease for a writer, especially a writer stuck in school all day. Yippee! Anyways, continuing on my attempt at catching up, here are some cards William recently sent me for my Yankees collection, to go along with 2 new ball cubes he sent me for some of my non protected autographed baseballs! 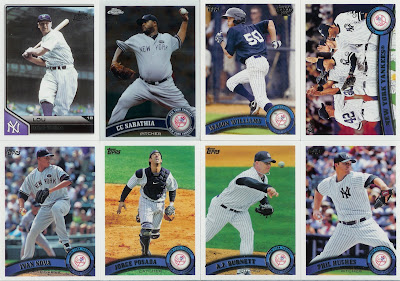 First were some base cards of some of the newer releases, in Chrome, Lineage, Pro Debut, and Update. Fortunately, he's kept me up to date this year, with a few Yankees cards thrown in here and there from most of Topps' releases. I haven't bought close to anything pack/box wise this year, so I really can't say much about Topps this year. I do like the feel of the 2011 Chrome product though, CC being the first one I've gotten from the set thus far. 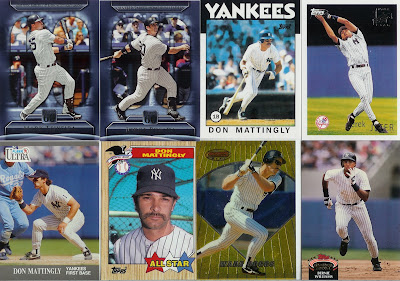 Next were a few mixed Yankees, including 2 of the 2011 Topps 60 players, Mark Teixeira and Jorge Posada. The Mattingly and Jeter cards are part of the 60 Years of Topps set, and the Jeter is an original back. I could definitely use some of these cards to fill holes in my Yankees need lists! 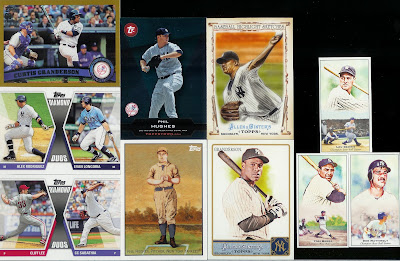 He also had more inserts for me, including a gold parallel of the Curtis Granderson 2011 card! In fact, he has now sent me that card and Granderson's diamond parallel card, so he's certainly helping my little chase for Granderson cards! Who knows what his chances at MVP are, but he'll certainly finish in the top 5 in votes when its all said and done. Also, some of my favorite cards of the package were the three Kimball Champions minis of Gehrig, Berra, and Mattingly. I love the look of these cards, and if I was to be crazy enough to collect any of the insert sets from this year, that would be the one I'd do. 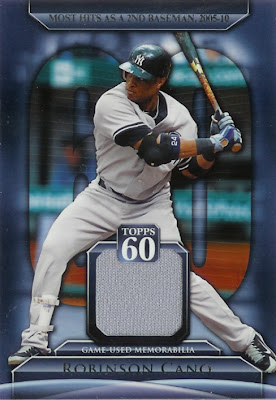 The final piece of the package was this sweet 2011 Topps Robinson Cano relic card, to join my growing personal collection of the reigning Home Run Derby Champion! Speaking of the derby, stay tuned really soon to see another recent pickup that has to do with Cano's big night! Anyways, this card really just looks great. I like how the jerseys are matching and the photo chosen is perfect for the card. It says he led the league in hits from 2005 to 2010 for a second baseman. Really? How much more do you need to narrow down stats just to see how they can fit Robby in the checklist! Go Topps!

So, thanks so much dude as always, you're the best! I'll have some stuff for you coming soon in a mailbox near you! (Hopefully it's your mailbox and not your neighbors) Anyways, See Ya!
Posted by Drew at 6:34 PM