Hey guys, Drew back here. Before I show my huge amount of hits I bought at the show tomorrow, I want to show what my buddy got at the show. One of them was for trade at the time, he bought it, suddenly didn't like it, tried to sell it, and now is stuck with it. You'll find out which one later, and I'll have to ask him if he has any interest in trading. If you have interest in the card, please leave a comment and offer up a Yankee or NY Giant in exchange for it. I'll let you know if he wants to trade it. Anyway, here goes, check them out: 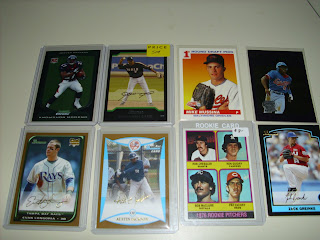 So, he sent me these pictures and I figured I'd share them, he didn't have a ton of money on him, but he bought a lot of nice looking cards and certainly got his money's worth by days end. More on that later. In this first picture, there are a bunch of nice rookies. He got a dirt cheap Knowshon Moreno rookie from 2009 Bowman Chrome, 3 Cano rookies that he got for the price of one from one VERY nice seller, a Mussina rookie in the 25 cent bin, as well as the Vlad rookie, and Greinke rookie. He got the Longoria rookie and Austin Jackson rookie for cheap, so his prospecting skills are pretty good. Lastly, he got a nice Ron Guidry rookie card that I need to buy at some point for a few bucks. I think Guidry needs more discussion for the Hall of Fame because he certainly was great. 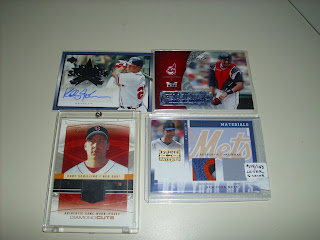 His main "hits" that he bought are very nice. His first purchase was this Kelly Johnson auto, since he is very hot at the plate so far this season. Next he bought the Schilling jersey /75, which is a good card especially for a few bucks, but he did not like it and wanted to trade it. So, if you want the card and have an equivalent Yankee for trade, please comment and let me know. His two last purchases were really cool. The Al Leiter patch is just insane, 4 colors, dual relic. It was his first patch in his collection, and it was staring at him. The final purchase of his was this awesome Victor Martinez autograph numbered to 50. Not only is this a beautiful card of one of the top catchers in baseball, it's also a chase card from 2007 Exquisite Baseball. Exquisite looks like a total waste of money but did produce some great looking cards, and this is one of them.

Please comment and let my friend know how he did. I think he did pretty good, and he really enjoyed it. I'll be back with Part 7 (my hits) tomorrow! See Ya!
Posted by Drew at 8:28 PM