I bought 2 hobby packs only at this show since I wanted more singles and didn't have much interest in packs. Here are the results: 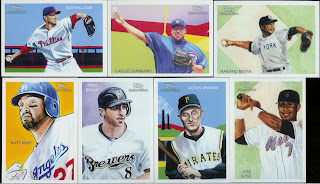 These cards are really cool. Sure, some paintings are kinda ugly, but I like most of them and I'm planning on getting more. For now I'm keeping the Rivera and the rest is for trade. 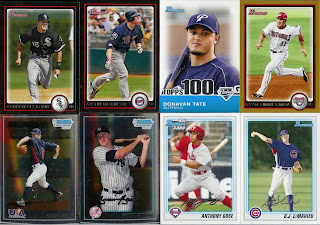 Again, not bad, my reason for buying this pack was to pull A Strasberg or Bryce Harper card, which both were selling for $30 each or so at the show. The cards look very nice this year, but I don't see the point in Topps 100. Nonetheless, it was a nice Donovan Tate.

So those were what I bought pack wise, but my friend bought some packs too. He was almost out of money so he bought 2 old school packs, I think 1989 Bowman, and 1991 Stadium Club. Yeah, he ate the gum in the Bowman pack! It had a disgusting sound while he chewed it, and an imprint of the original piece was left on the back of a Mookie Wilson card!