Tonight, the Yankees open the most important series of their season in Boston. New York is below the Red Sox in the AL East standings by 4 games, but is only down 2 in the Wildcard race. Masahiro Tanaka takes the ball for the Bombers against Eduardo Rodriguez in a battle that has the potential to reinvigorate their dead rivalry.

A little over a month ago, the Yankees traveled to Boston with much lower stakes. They had just traded their best hitter and two best relief pitchers, and were working on building towards the future. Their biggest headline at the time was that Alex Rodriguez had just announced that the upcoming Friday night game in Yankee Stadium against Tampa Bay would be his last. In retrospect, that news feels ancient after the youth movement extravaganza that has taken place since. 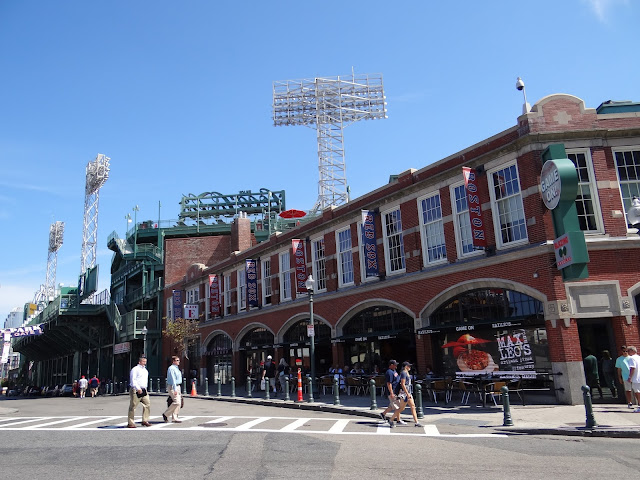 But leading up to that Fenway series, one Yankee fan was arguably more excited than the others (hint: me). My family had planned our annual summer vacation around this series and getting to go to Fenway Park for the first time! The trip consisted of two nights in Boston and the remaining 4 in Cape Cod before we eventually headed home. I had never been to Beantown in my life, so getting to explore parts of the city during those few days was really exciting. I might hate their teams with a fiery passion, but I have nothing against the city itself.

On Tuesday, August 9th, we began our Fenway Park experience by joining in one of the stadium tours. We had tried to sign up for the pre-game tour, but since that was already filled we instead opted for the hourly tour. While it was disappointing not to be able to go on the warning track, we were more than content with what we were given on this adventure. 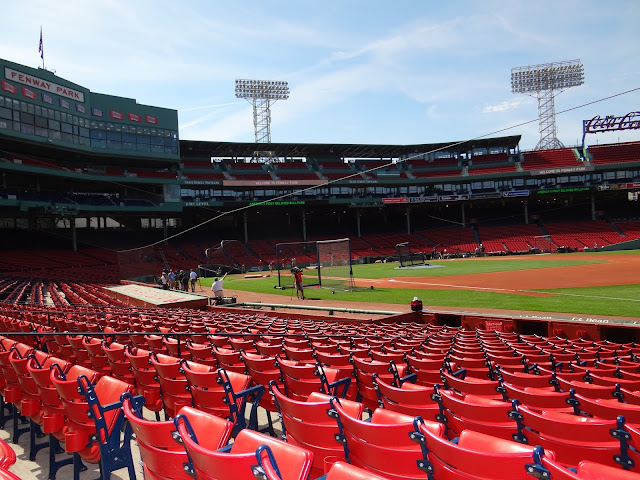 As we strolled past all of the empty red seats, I could've sworn I traded glances with Red Sox president Dave Dombrowski. He probably didn't like that I was decked out in my road Yankees uniform, but I frankly couldn't care less. 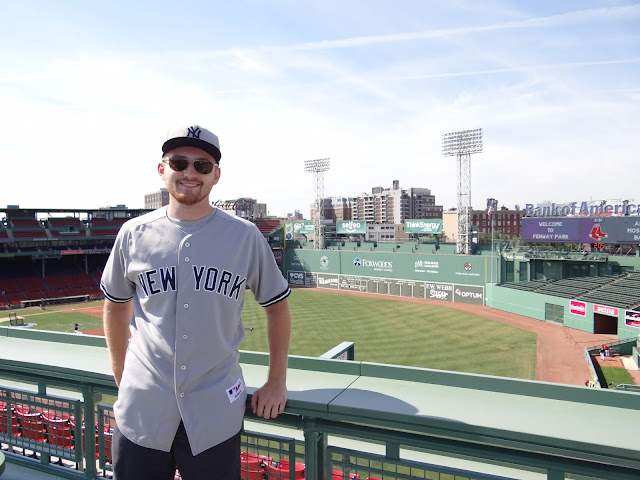 I had made it a life's goal to go to Fenway sporting nothing but blue and navy. I'm not even technically an adult yet, and that mission has been accomplished. 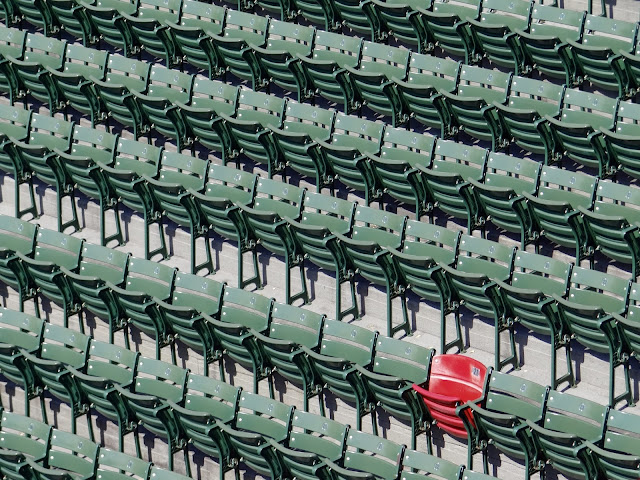 Here's a pretty neat shot I took of the famous seat marked red after Ted William's 502 foot home run in 1946. The tape measure shot was the longest ever recorded in Fenway's history, so it's only fair that every fan can clearly see where it landed.

We also got to take in the view from the Green Monster. I can't say I ever really thought the view would be worth paying an exorbitant amount of money to sit atop the enormous left field wall, but I was surprised by how picturesque it was. The above picture is my attempt to share this with you. 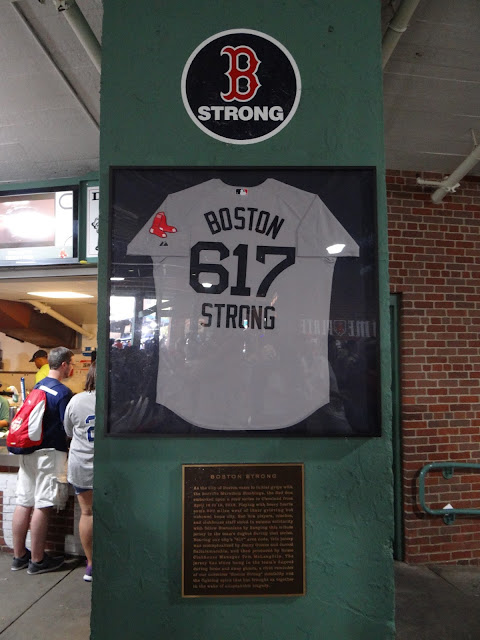 On the lower level, fans are greeted by this plaque and jersey honoring Boston after the horrific bombing at the Boston Marathon in 2013. You would be hard pressed to ever catch me rooting for anything Boston-related, but it was hard not to sympathize with their community after the tragedy. 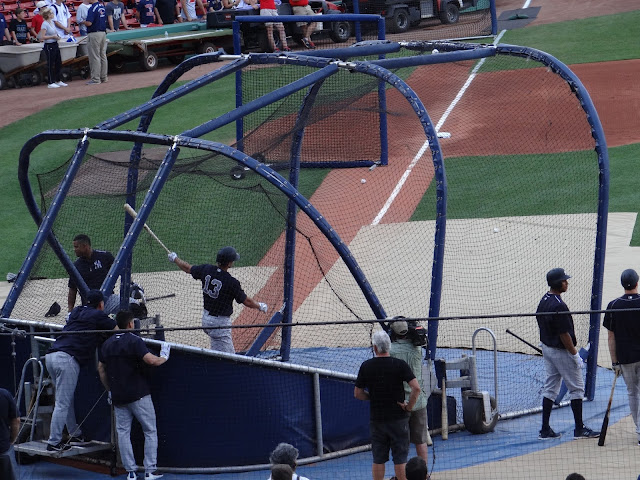 Before long, game-time was approaching and the teams started taking batting practice. In between the tour and the game, we had to leave and re-enter the stadium. We stayed for 2 nights at the Buckminster Hotel, which is less than a 5 minute walk from the stadium and is known for several historic events; mostly for being the building where the Black Sox scandal was originally organized in 1919.

The lines outside Fenway were crazy long, but we met a bunch of pleasant people during that time. A majority of them were wearing Red Sox apparel, but only a couple we talked to were actually fans of the team. It wasn't casual fans either. We even met Blue Jays fans wearing red and navy... I didn't get that. 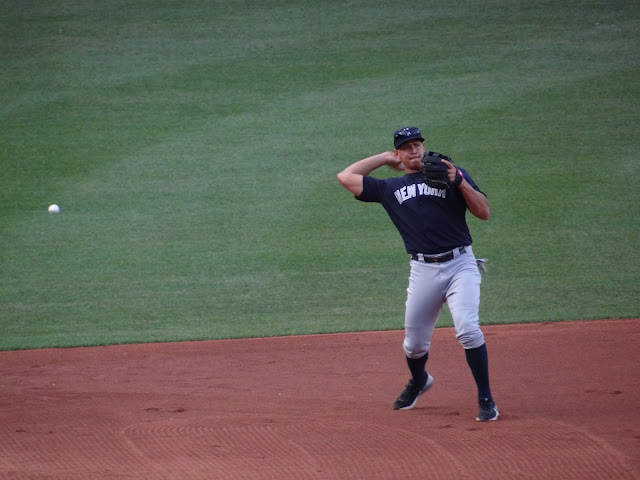 A-Rod didn't play in our game, but I was glad we got to watch him take batting practice and some grounders at the hot corner. I've loved Rodriguez and hated him over the years, but in the end I felt bad for how he was pushed out. I think he's done a lot of good things in the clubhouse since his season long suspension, and a lot of the fanbase was beginning to see that. 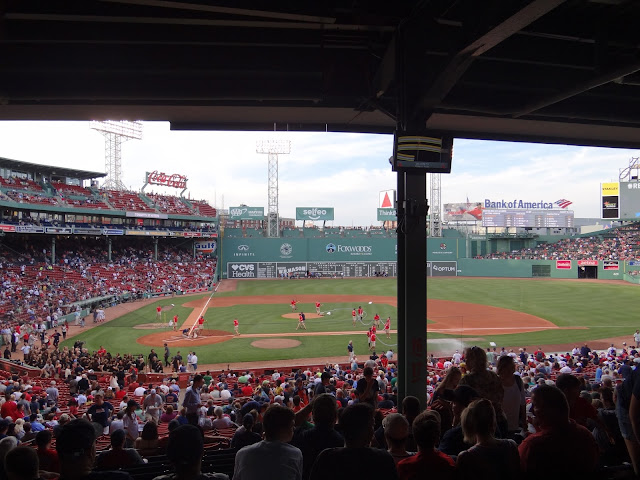 The view from our seats was really phenomenal, outside of the big obstruction in the way. It didn't end up getting in the way of things that much, but it would've been nicer without it. 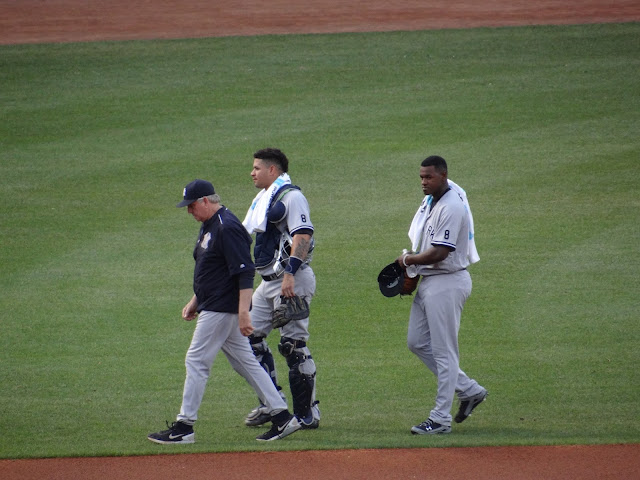 Boy, a lot has changed since this picture was taken of Larry Rothschild, Gary Sanchez, and Luis Severino. Sanchez had just been called up at this point and did not yet begin mashing like he eventually would. Luis Severino had just come off some excellent relief outings, and was set to return to the rotation. 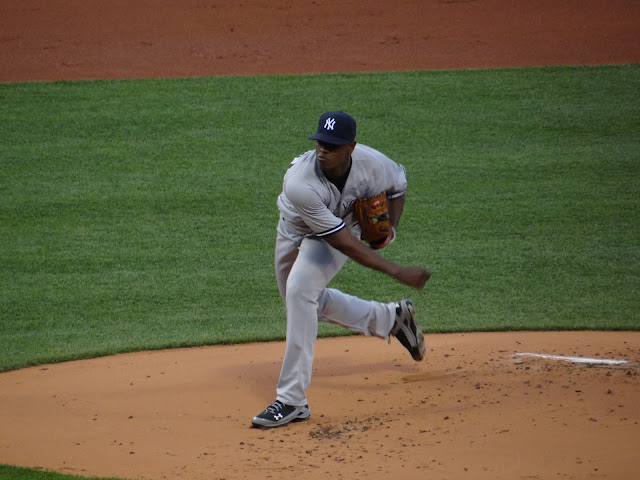 It wasn't a good one for Sevy. Rick Porcello dominated Yankee bats for eight innings, but Severino couldn't outlast the 5th inning. He was tagged for 5 runs on 7 hits, and it was tough to watch. So tough, in fact, that I had to get up and get ice cream to relief the pain.

In the 9th inning, the Yankees were down 3 runs and were able to walk in a run against Craig Kimbrel with 2 outs. The score was 5-3 when Mark Teixeira struck out to end the game. The final was 5-3, Boston. I went to three Yankee games this season, and they lost all three. Next year. 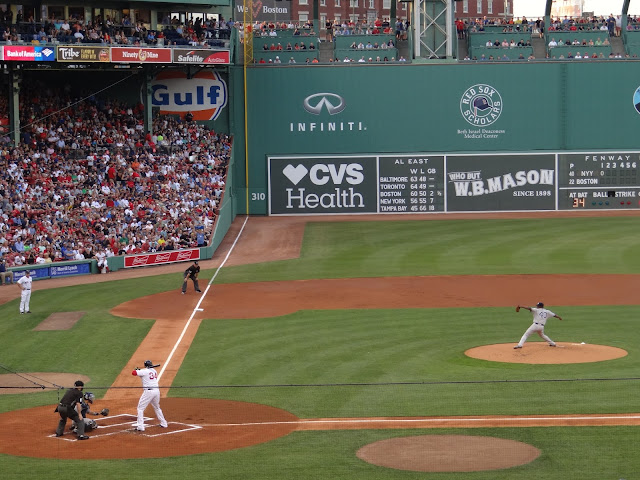 Despite the loss and the tough performance from one of my favorite pitchers, it was so much fun getting to go to perhaps the most famous baseball stadium in the world. It was a change of pace from the modernistic Yankee Stadium. In Fenway, you can be uncomfortable with obstructions in your way and still find ways to have a great time. That's what baseball is all about.

With that said, go Yankees. Let's take this series and snatch up a Wild Card, once and for all.
Posted by Drew at 6:15 PM