Zippy Zapped Back Into the Blogosphere! 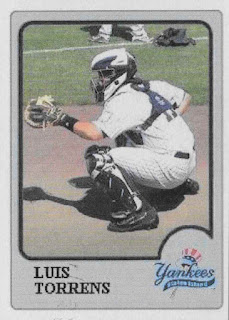 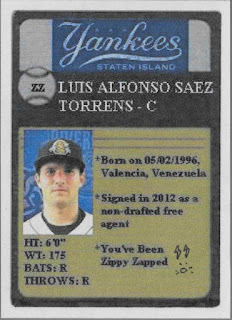 In my blogging return last week, I cited the fact that school was underway and having less on my plate as the main reasons I've been able to come back. But I still lacked that final burst of energy to push me back into the blogosphere, until I met the Zippy-Zapper himself.

Kenny has been "Cervin' Up Cards" for quite some time now, but I hadn't really gotten to know him until we started talking Yankee baseball on Twitter. In my time away from Blogger, I've been a part of collecting communities on Twitter and Instagram, and have gotten to know some great people in the process. Before leaving to go to the East Coast National (which you will hear about in due time), we made plans to meet up at some point throughout the day.

The storm had settled in Westchester's County Center as dealers began to start packing up, but we were able to meet and spend some time observing the tables and talking about all things baseball. I was fascinated by his wealth of knowledge towards the Yankees farm system and towards prospects in general. But what blew me away over anything else was the kindness and generosity in his heart. He unloaded his backpack filled with goodies for me, and I couldn't believe it. It was hard for me to accept it all at once, but he insisted upon it. I felt better knowing that I was prepared to get him back for his madness, and took a look at what was now mine. 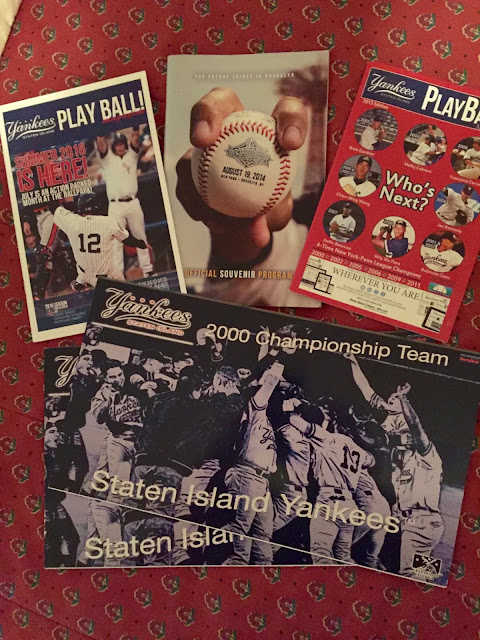 The two Staten Island booklets feature team sets of the 2000 Low-A Champion Staten Island Yankees. I can't say I'm all that familiar with most of the players on the team, outside of Chien-Ming Wang. These cards have perforated edges so they can easily be separated, reminiscent to the days I was subscribed to Sports Illustrated Kids way back in the day.

Kenny also gave me 3 SI Yankees 'PlayBall Magazine' souvenir programs from 2014, 2015, and 2016! I have seen the Staten Island team play plenty in the past, but never actually at their home stadium. I am more familiar with Dutchess Stadium, where the Hudson Valley Renegades play; and have seen them play there in the past. We discussed having a future summer night spent at each stadium graphing, and I hope we can work that out next year. 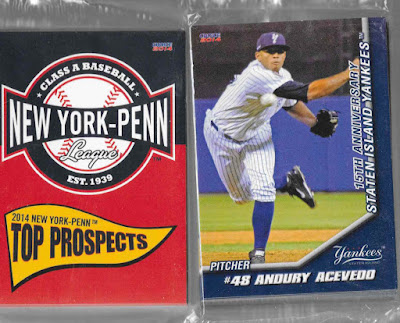 These two Choice 2014 team sets were really neat toss-ins too. The set to the left features some of the best players from the New York-Penn League in 2014, which included Amed Rosario (Mets), A.J. Reed (Astros), Bradley Zimmer (Indians), and the god himself, Luis Torrens (Yankees). After speaking to Kenny, I can now say I believe Torrens will be a combination of Ted Williams and Johnny Bench! Speaking of which, Torrens was also featured in the SI Yankees set. That set had some surprisingly intriguing names such as Jordan Montgomery, Jonathan Holder, Ty Hensley, and Thairo Estrada to go along with the heir apparent to Babe Ruth (first time readers must be really confused). 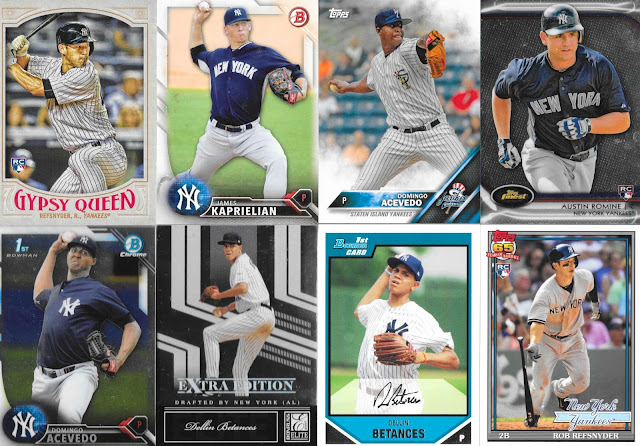 He also threw in a bunch of cards of scrub Yankees (in comparison to the future first ballot Hall of Famer) Betances, Refsnyder, and numerous others. I'm starting to wonder how much longer Refsnyder will be a part of the team. It wouldn't shock me if he is an added piece in an offseason trade, because no matter what he does, it's never enough to earn a full time spot on the team. 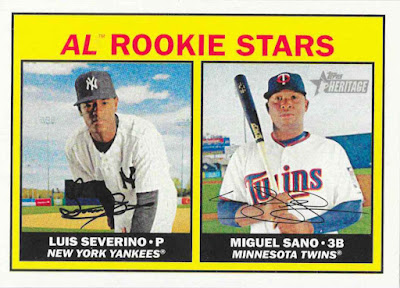 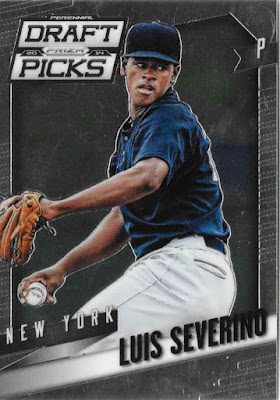 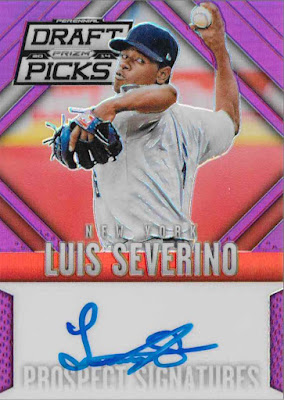 You can never go wrong with Luis Severino, unless of course you're Joe Girardi naming him as an upcoming starter. I have slowed down collecting Sevy ever since his downward spiral, even though his card prices have tanked. I've invested far too much money already to keep buying his stuff in good conscience. However, I didn't have any of the 3 cards above, and really love the autograph in particular!

I think it's sort of funny seeing Sano and Severino on the same card considering how mis-managed I believe they both have been thus far into their careers. Sano, to me, should not be in the field even though today's American League game tends not to employ full time DH's anymore. He can be an exception to that rule because he appears to have legit 40-50 home run pop in his bat. Meanwhile, Severino's poor performances in the starting rotation (while dominating in the late innings) have bounced him back and forth faster than you can say "Joba Chamberlain". Keep him in the bullpen for a prolonged period of time until he builds up enough confidence to be the starting pitcher we Yankee fans expected him to be. Rant over. One of my favorite cards Kenny bestowed upon me is this 2014 Bowman Asia Exclusive Aaron Judge parallel. Judge hasn't quite followed up his explosive start to his career, and is striking out in over half of his at bats. We knew from the day he was drafted that plate discipline was going to be an issue, so this should be expected. He doesn't see fastballs often because he is known to crush them, so adjusting to major league caliber offspeed pitches will take time. Don't give up on this Baby Bomber though, because the future is still bright. 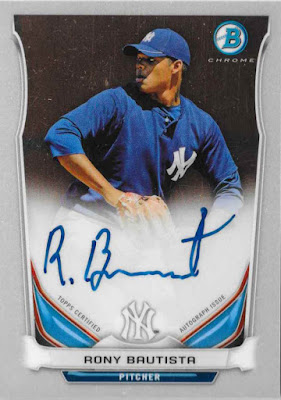 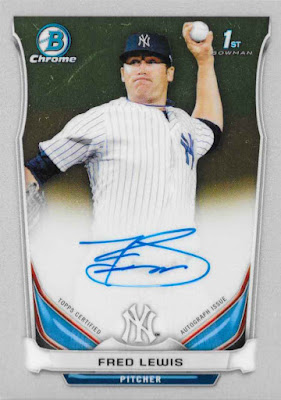 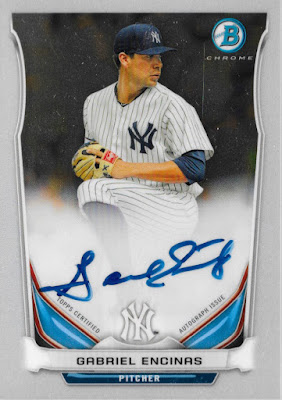 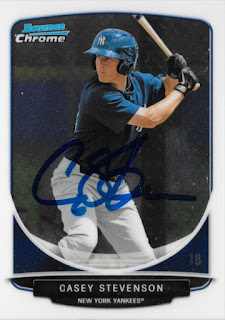 When it comes to Yankees prospects, Kenny knows more than most. I have seen these autographed cards before, but I don't know much about the players on them. Encinas is the only active player in 2016, pitching in High A for the Yankees. He has struggled mightily, but the former 6th rounder could get it together. Both Lewis and Stevenson were taken in the later rounds in the 2010 Draft, while Bautista appears to have been an International signing. 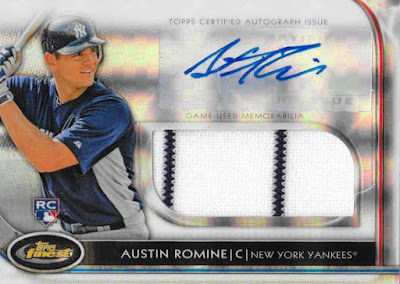 I never had much of Austin Romine, so this card is now my favorite of his. The Yankees have been able to churn out quality catchers for some time now, and he's just another example of a big league backstop. He handles his own, and probably will serve as a backup for years to come; whether he's with the Yankees still or not. 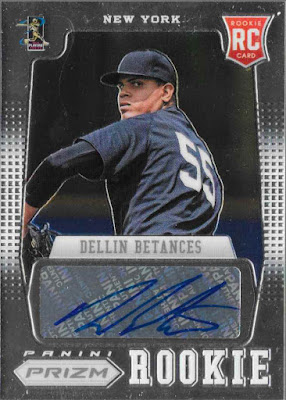 Dellin has really stepped into the closer role well ever since the deadline deals of Aroldis Chapman and Andrew Miller. I can't say I'm all that surprised by this news, though. He has been so dominant for now three years, and his stuff would translate well in any bullpen role. I'm not an enormous fan of the Panini designs, but I'll take a spare autograph of his to pair with my Bowman Chrome auto any day.

Kenny, thank you so much for the much needed zippy-zappying. It was a pleasure meeting you, and here's to hoping my revenge package will come close to matching all of this.

If you haven't already, please go check out Kenny's blog, Torren' Up Cards. If you have any cards of baseball jesus (Luis Torrens, duh), be sure to hit him up!
Posted by Drew at 10:30 AM