Hey everyone! How's life? I know I can say nothing but positive things these days, as I've managed to get really involved on campus for the first time. College is actually enjoyable now that I've broken through some barriers and allowed myself the chance to branch out more. I've been working towards advertising some of our local school events, and have even gotten the privilege to meet broadcaster Ian Eagle and talk to him about working in sports. Also, I've been covering a lot of my school's football and soccer games for my Sports Reporting course. So yeah, no complaints at all here.

Because I've been interning so often on campus, I haven't had time to actually work and make money. I was on a roll with this hobby up until then, but I've got to get a jump start on my future career before I get back to spending a fortune. I have spent some of the money I saved from working literally every single day this summer at a few card shows, and I'll start catching you up by showing you what I got at the East Coast National in August!

At this show, I had the pleasure of meeting Kenny from Torren' Up Cards (which I talked about a while back). Dad was unable to join me for this one, but he did come with me last weekend to the Fall Classic show that will more than likely be posted next year at this rate (that was a joke). But for now, here's some sweet certified goodness I've had the pleasure of calling my own. 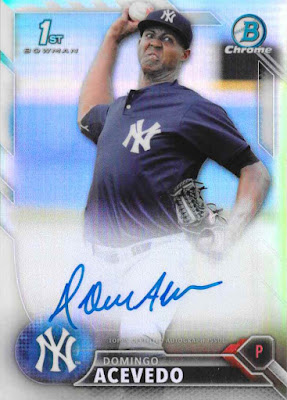 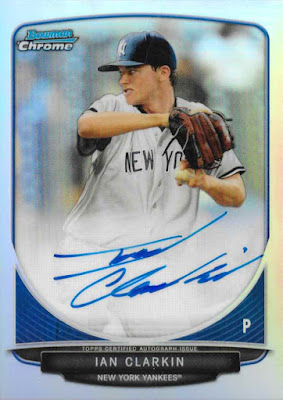 We kick things off with some refractor autographs of Yankees farmhands Domingo Acevedo and Ian Clarkin. I've been working on adding refractor autos of my team's top prospects, and these two were both affordable. I previously owned a graded 9.5 version of the Acevedo, but I accidentally purchased the base instead of the refractor.

Acevedo is ranked 8th among the Yankees prospects according to MLB.com's Prospect Pipeline. He is making a name for himself by averaging 96-100 mph consistently, and has even hit 103 mph during his time in the minors. At 6'7, he appears to have the prototype and build of a guy named Dellin Betances. I don't know if he'll ever get to that level, but the potential is there for sure.

Ian Clarkin was drafted 33rd overall and was taken with the supplemental pick the Yankees received when the Nationals signed Rafael Soriano in 2013. He has battled several injuries early on in his big league career, but did pitch to a 3.31 in 18 starts last season for the Tampa Yankees. He currently ranks as the Yankees 17th best prospect in their loaded farm system. 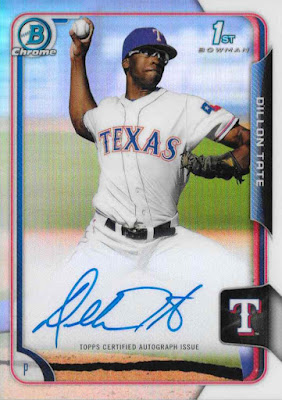 I also took home this 2015 Bowman Chrome refractor auto of new Yankee Dillon Tate! Tate was the fourth overall selection by Texas in the 2015 Draft, and was dealt to New York in the Carlos Beltran trade this summer. He was originally compared to former Oakland A's hurler Dave Stewart, but hasn't quite lived up to the hype so far. However, since coming to New York his velocity has increased from the high 80's to low 90's in Texas to the mid 90's he was expected to throw. If the velocity can stick as he transitions out of his current bullpen role back to the rotation, he could have a future in pinstripes. 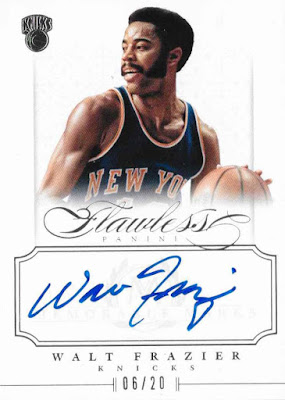 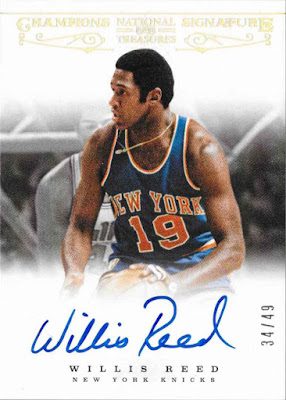 My basketball collection isn't all that large, but at this show I was able to add a couple big cards to my minuscule Knicks collection. I couldn't believe how cheap these two autographs above of legends Walt Frazier and Willis Reed were. Not only are they both gorgeous on card signatures from high end products, but they're also both extremely limited (Frazier numbered to 20 and Reed to 49).

Walt 'Clyde' Frazier was a great player in his day, but I know him more for his colorful personality, crazy fashion statements, and, of course; "swishin' and dishin'". He previously held a majority of the team's franchise records until Patrick Ewing eventually surpassed all but Frazier's assists mark. Willis Reed was a former MVP and two-time NBA Finals MVP who was named to the 1996 '50 Greatest Players in NBA History' list. He once played through a torn muscle in his thigh and helped the Knicks win their first of two championships; defeating the Lakers in Game 7 of the 1970 NBA Finals.

Between the two, there were an awful lot of accolades. For the price I paid, I'd do it all over again. 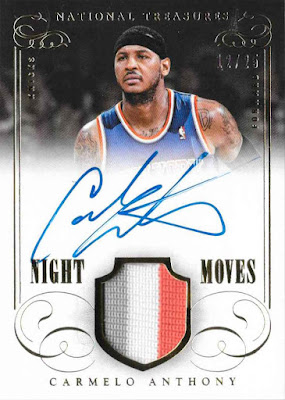 I wasn't done. I had been shopping for a Carmelo Anthony for some time, but couldn't decide which card I preferred to add. This National Treasures beaut numbered to 25 caught my eye that day, and I was able to work the seller down on the price. 'Melo is one of my favorite players to watch in the NBA, and I love the fact that he uses his celebrity platform to try and make a difference in the world. When comparing generations, I can see him going down as this generation's edition of Charles Barkley: both great players who could never quite win it all. The three-color relic that coincides with the autograph on this card is actually really nice and adds to the card's appeal.

Going forward, I would like to add more Knicks greats to my collection, as well as a few of the stars from my childhood. I don't really follow the NBA as much as I used to, but it's still fun (when the Knicks are competitive). 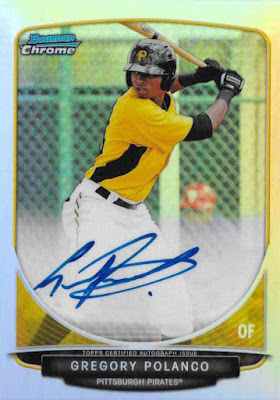 The same seller I bought the Carmelo autograph off of had this Gregory Polanco refractor autograph for a pretty fair price as well. With the money I had remaining at the end of the day, I made an offer and got this for an absolute steal compared to what it sells for on eBay. Polanco is a talented young player who really came into his own in 2016, hitting 22 home runs while driving 86 runs and scoring 79 of his own. Pittsburgh has even talked about trading Andrew McCutchen due to the emergence of Polanco and Starling Marte, plus top prospect Austin Meadows on the cusp of the majors. 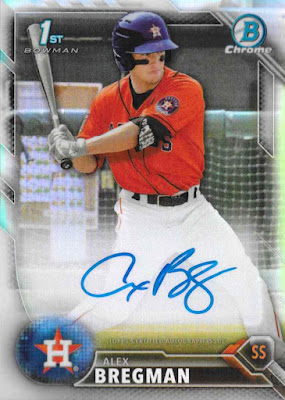 The biggest card I bought that day was something a little out of the ordinary for me. I had been debating whether to invest in a top tier prospect the entire day, and eventually after talking to a major Alex Bregman collector I decided he was the one I would add. This 2016 Bowman Chrome refractor autograph is absolutely beautiful, and is currently being graded in a BGS group submission. I'm looking forward to getting it back and seeing if it can pull out a 9.5! I could've bought the card as a 9.5 for about $50 more, but I had confidence that this raw copy would be good enough to match the grade.

Bregman made his MLB Debut in 2016 after absolutely mashing the ball in the minor leagues. He batted .306 with 20 home runs and 61 RBI between AA and AAA before getting the call-up the day after my 20th birthday! He did not immediately translate to the big leagues in the way that Gary Sanchez did, but continued to progress until a hamstring injury ended his season midway through September.

I'm starting to really enjoy buying Bowman autographs of top prospects. It's really fun taking a gamble on player's futures and getting to root for them in the way I have for Bregman. It has been able to bring me even closer to the game than I knew was possible.