Walk the Walk & Talk the Talk: A Tribute to Muhammad Ali 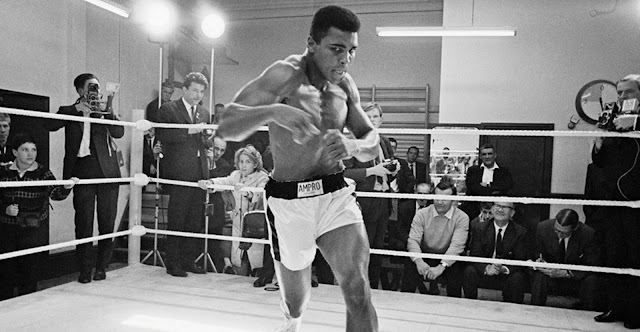 Arrogance has always been one of my least favorite qualities a person can have. In most cases, I feel that it's a tool used by weak personalities to hide insecurities. In this world we live in today, it is relatively easy to transform into someone you're not; especially after the birth and rise of the Internet. While we now have freedoms we're still working out the kinks to, it is tougher than ever before to remain genuine and honest with others in a world so deeply rooted in boastful lies.

But in the rare case, arrogance is permitted in my book of what is tolerable and what isn't. And no, if you're excited thinking I'm referring to Donald Trump, you probably have the wrong idea and should go consult Fox News. I'm talking about Muhammad Ali, the self-proclaimed "Greatest of All Time". Ali, of course; left us too soon on Friday night after battling Parkinson's Disease for over thirty years. His impact has been reflected upon every second of this past weekend by friends, family, athletes, and fans; as it rightfully should have. After all, no other modern athlete has left behind the global legacy he had.

Muhammad Ali once said that he called himself the greatest before he even knew he was. His ego was unprecedented and challenging to an American society that was still rampant with racial tension. The man even refused entry into the Vietnam War because he felt it wasn't fair for him to defend a country that wouldn't defend him. Whether you agree with his decision or not, the man made a hell of a point. He lost some of his fanbase by choosing punishment over war, but it was hard to root against him once he stepped back into the ring.


For his career, Ali won 56 of his 61 fights; 37 by KO. He entertained my parents' generation by trash talking his opponents while transcending boxing with phantom punches and the rope a dope. At the same time, he pushed boundaries for African Americans and took pride in his Muslim faith. He used the platform he was given to spread love and make a difference in the world, while also being the most ferocious fighter we may ever see. If that doesn't make him the greatest, I don't know what else would.

Like the famous idiom says, if you can walk the walk, you can talk the talk. Ali was confident in his abilities and proved himself time and time again. In the end, he succumbed to the illness brought upon by what made him great. But we all know that he died a bigger winner than any one of us.