Hey everyone, Drew back here. I had a rather surprising month with through the mail successes. I don't believe I've mailed any requests out since this past summer (if not even earlier), but I sent out quite a few around that time. It's more refreshing than ever to see a little white envelope in my mailbox, and I hope to get a solid batch out in the mail before I leave the country next month. 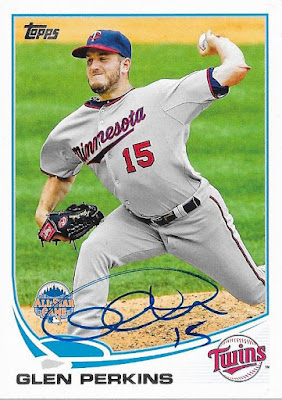 Perkins has been in the league for 10 years now, and he certainly has been one of the more elite relievers in that time. Due to playing his entire career with Minnesota, I would say he's very underrated. He's made the All Star team in three consecutive seasons after being named the Twins closer sometime in 2012. His downfall does appear to be the second half of the season, where he owns a lifetime ERA over a run higher than his first half splits. Hopefully this trend will lead to a few more All Star selections before he hangs up the cleats.

He signed one 2013 Topps Update All Star card for me nicely in thin blue sharpie; also adding his number 15. This success alone would have sufficed for me this month, but fortunately a few other players had some Christmas gifts planned. 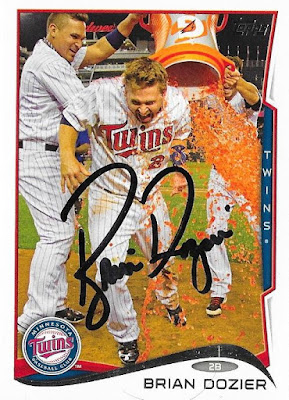 A second Minnesota Twin decided to get in the giving spirit this Christmas and hook me up! Brian Dozier broke out in 2013 as an offensive minded second baseman capable of hitting the long ball. Over the past three seasons he's hit a combined 69 home runs for an emerging Twins team that was in the hunt for a playoff spot much of 2015. He was awarded with an MVP vote and his first All Star appearance last year of possibly several more to come, and his team looks to get better with each passing year.

In this case, he signed a 2014 Topps card that I really liked even without the signature. Some of the Gatorade shower cards seem to get a bit excessive, but this one really captures the excitement at Target Field. He has such an impressive signature too, might I add. 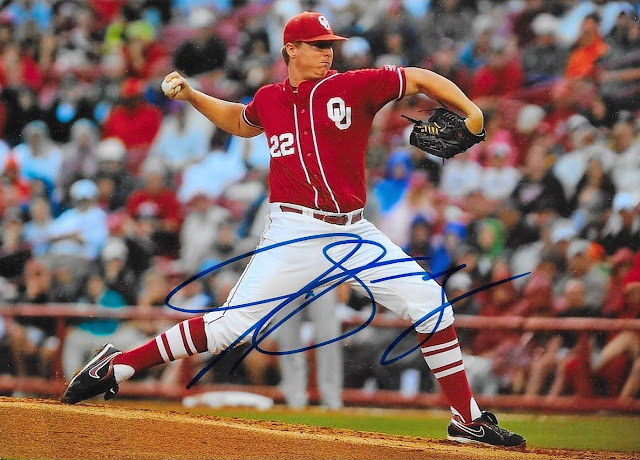 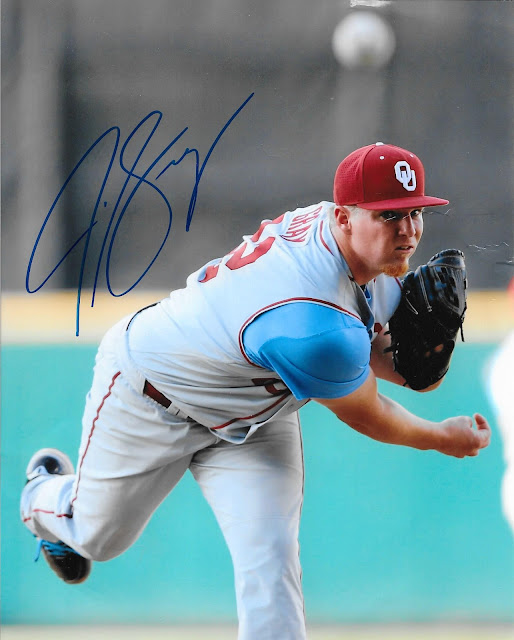 In most cases I don't attention to the MLB Draft, outside of who was taken by the Yankees. But in 2013, I followed it more than usual and saw the Rockies choose Jonathan Gray third overall. When I watched his highlight tape, there was something in it that reminded me somewhat of Roger Clemens. Ever since, I've been following his way up the ladder and into the big leagues. In 9 starts in 2015, Gray struggled; pitching to a 5.53 ERA (although his FIP does suggest he suffered from some bad luck). He couldn't have asked for a worse place to begin his career from a pitcher's perspective, but perhaps he will be able to overcome the hitter's ballpark and pitch effectively.

Unfortunately, the 8x10 photo was beaten up when I received it back in the mail. I'm certain that I included some form of plastic case, but it wasn't used when the photos were sent back. His signature is blue and bold, and makes up for the damage without question. The 5x7 has a dent or two but came out much better condition-wise. 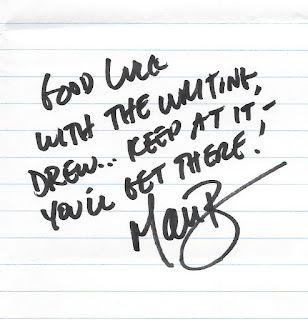 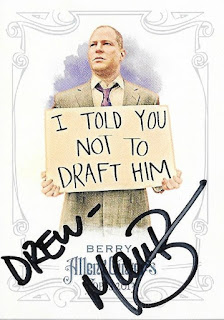 I had the pleasure of going to a local event with Matthew Berry at my friend's parents' bookstore in 2013. My friends and I were some of about 25 people who listened to Berry talk about his book, fantasy strategies, and various other odds and ends. It was so much fun getting to know one of ESPN's breakthrough fantasy analysts, and it was one of the more unique experiences I've had since beginning my obsession with this hobby.

After Allen & Ginter created a Berry card in its 2013 set, I wanted to get a copy signed. In time, my wish was granted, as he signed the card and wrote me a note in response to my letter. He is certainly a class act, and although he didn't help me much with my fantasy football team this year (it was a lost cause though), I'll forgive him after these great autographs. 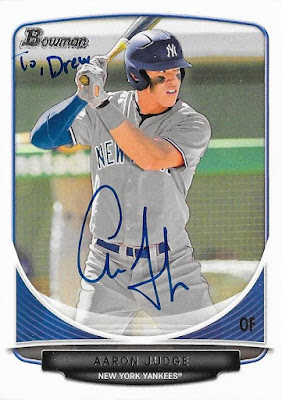 I can't think of a much better way to top off this post, and this year, then by showing my best success in a considerable amount of time. It was a good year for TTM's for much of the early and later portions of 2015. While it was somewhat of a wash in between, I guess I just needed to be patient in order to finally get back a few successes. Had I known in time I would actually receive an autograph from Judge back, perhaps I would've been more persistent and not lost hope in the hobby I once thrived in.

Aaron Judge, you're my only hope (sorry, couldn't help but throw one Star Wars reference in there). If you can get back to me in between being slugging home runs in the minor leagues for the Yankees, anyone can.

Hopefully this will be a sign for many more future successes in 2016! Who are you hoping to get back from next year?