A Special Night at a Special Place 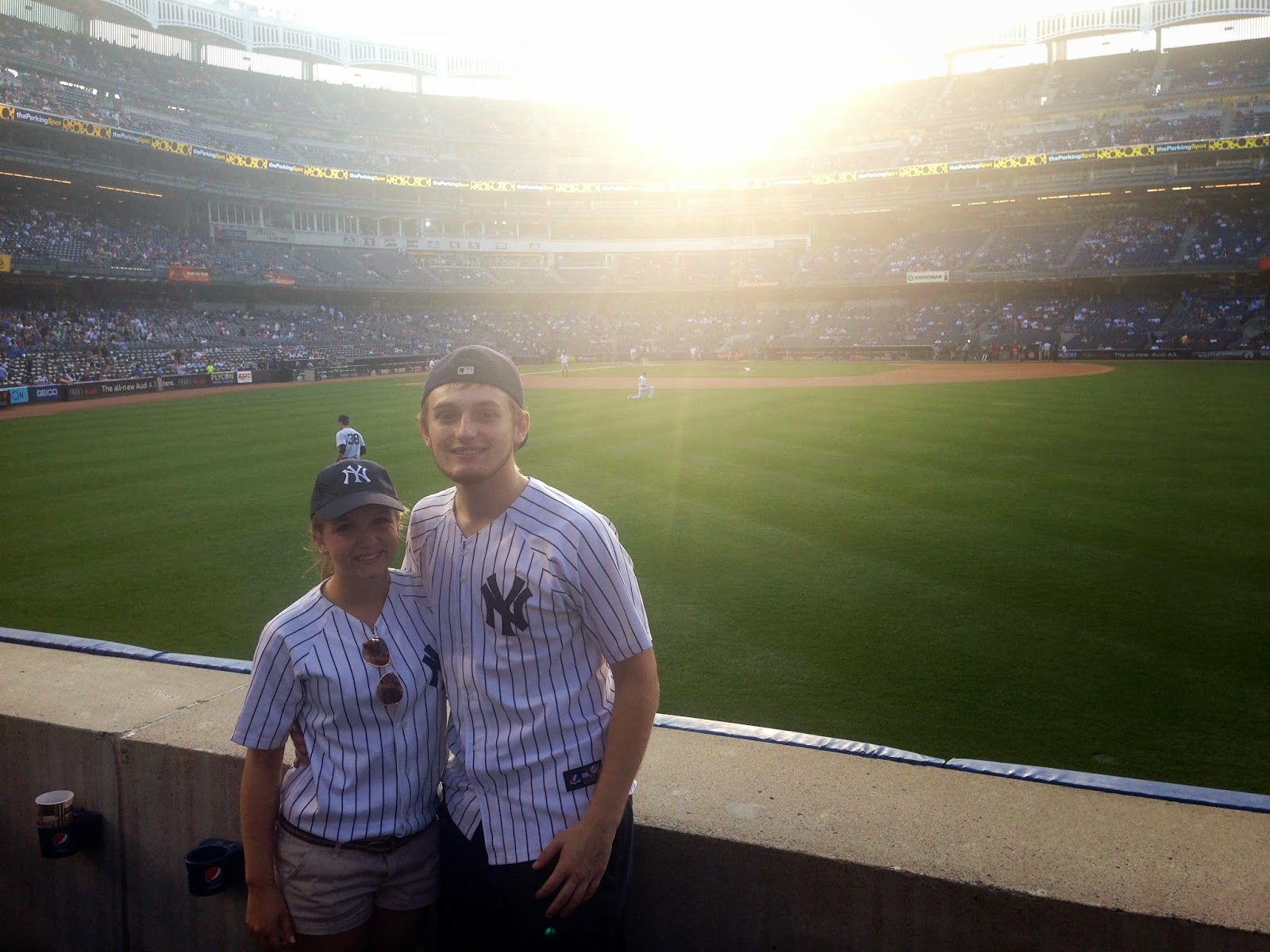 Hey everyone, Drew back here. My summer is coming to a close and fast, but I've been busy making sure I leave my home on the best note possible. Last night my Dad took my girlfriend, sister, and I to the Yankees game! The Yanks took on Detroit, and the pitching matchup worried me that we may not have chosen the best night to go. The Tigers started last year's Cy Young winner Max Scherzer, while the Yankees put newly acquired Brandon McCarthy on the mound. The thing with baseball is, things never seem to go as planned. 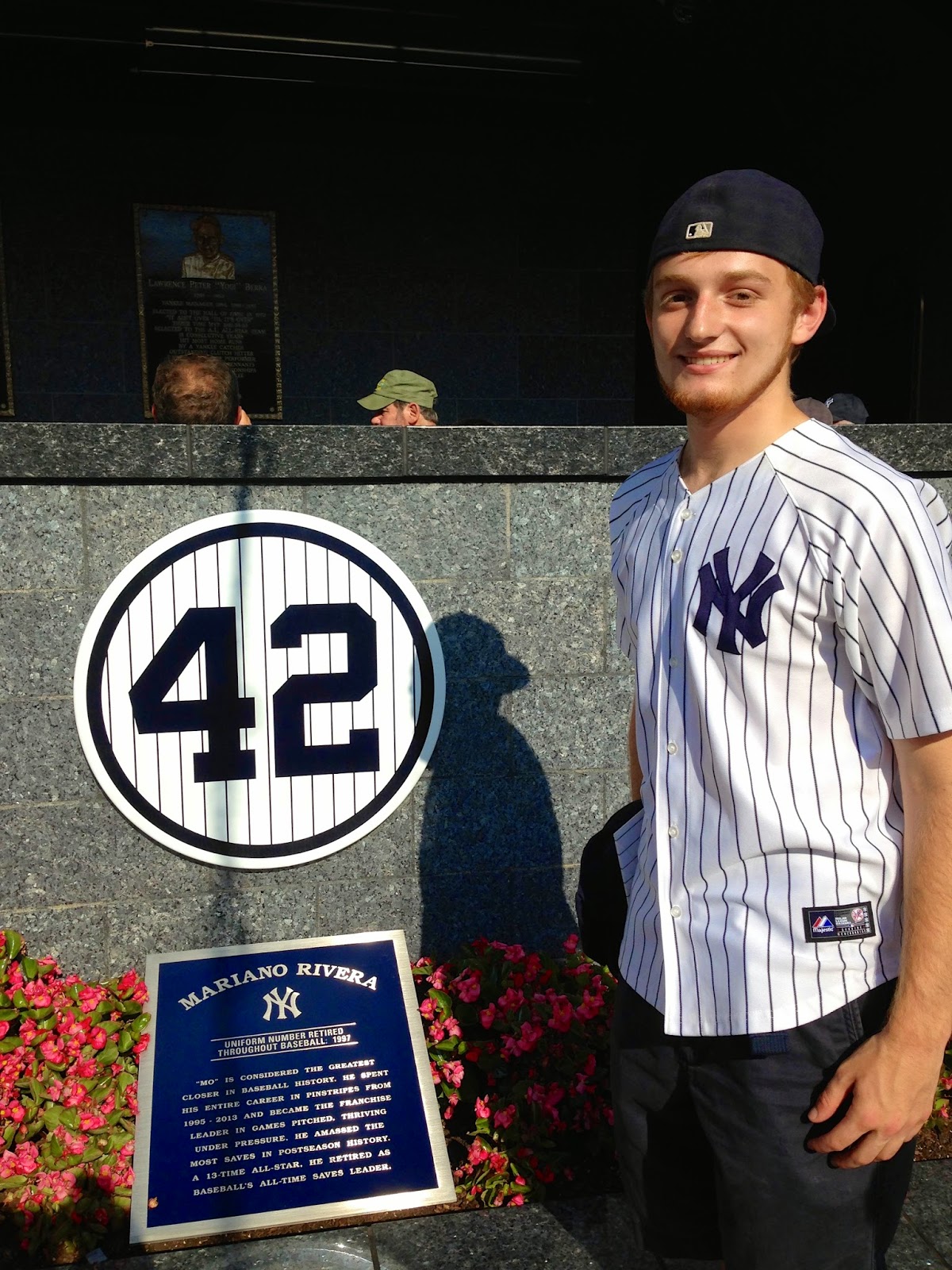 We got to the stadium over 2 hours prior to gametime, so we immediately bolted to Monument Park to see it before it became overcrowded with people (still too late). It was very busy, but we got there early enough that we didn't really have to wait in line for long, which certainly helped under the blistering sun. I got to finally see Mariano Rivera's retired number, which really was amazing. He was the first player I grew up watching whose number was put to rest by the Yankees organization, so it almost felt like a part of my childhood was along the hallowed halls of the park. 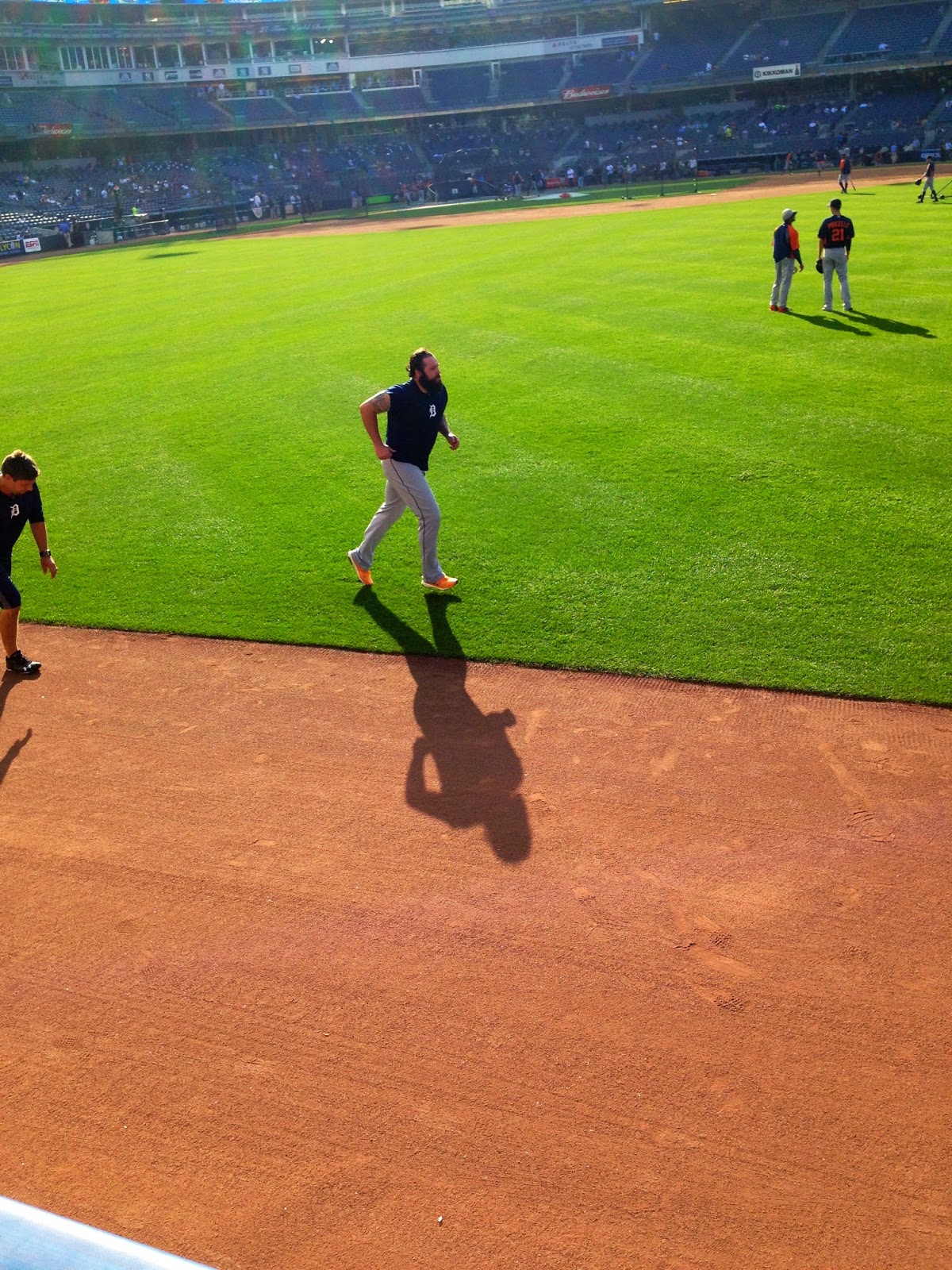 I forgot my mom's amazing camera at home before the game, so I only ended up with cell phone pictures. I didn't get any spectacular pictures, but we had field level front row seats in right field (if you've been following for a while, the same seats I got on TV with when Cano belted one out a few years ago). Here's Jesus Joba Chamberlain warming up with Detroit. He kind of looks like he lived out of a garbage pail between his time in New York and Detroit, but I must say, it may have brought out the best in him since he's having a solid 2014 campaign.

Batting practice was scary, to say the least. As I mentioned earlier, our seats were in the front row of the right field bleachers, and BP took place just as the sun was setting. We couldn't see any balls coming our way until they were right near us, and I find it funny how 9 out of every 10 of those balls were hit by Miguel Cabrera. If you were there and didn't really believe in his talent beforehand, you'd have been sure to change your mind following the show he put on in batting practice. Unreal. 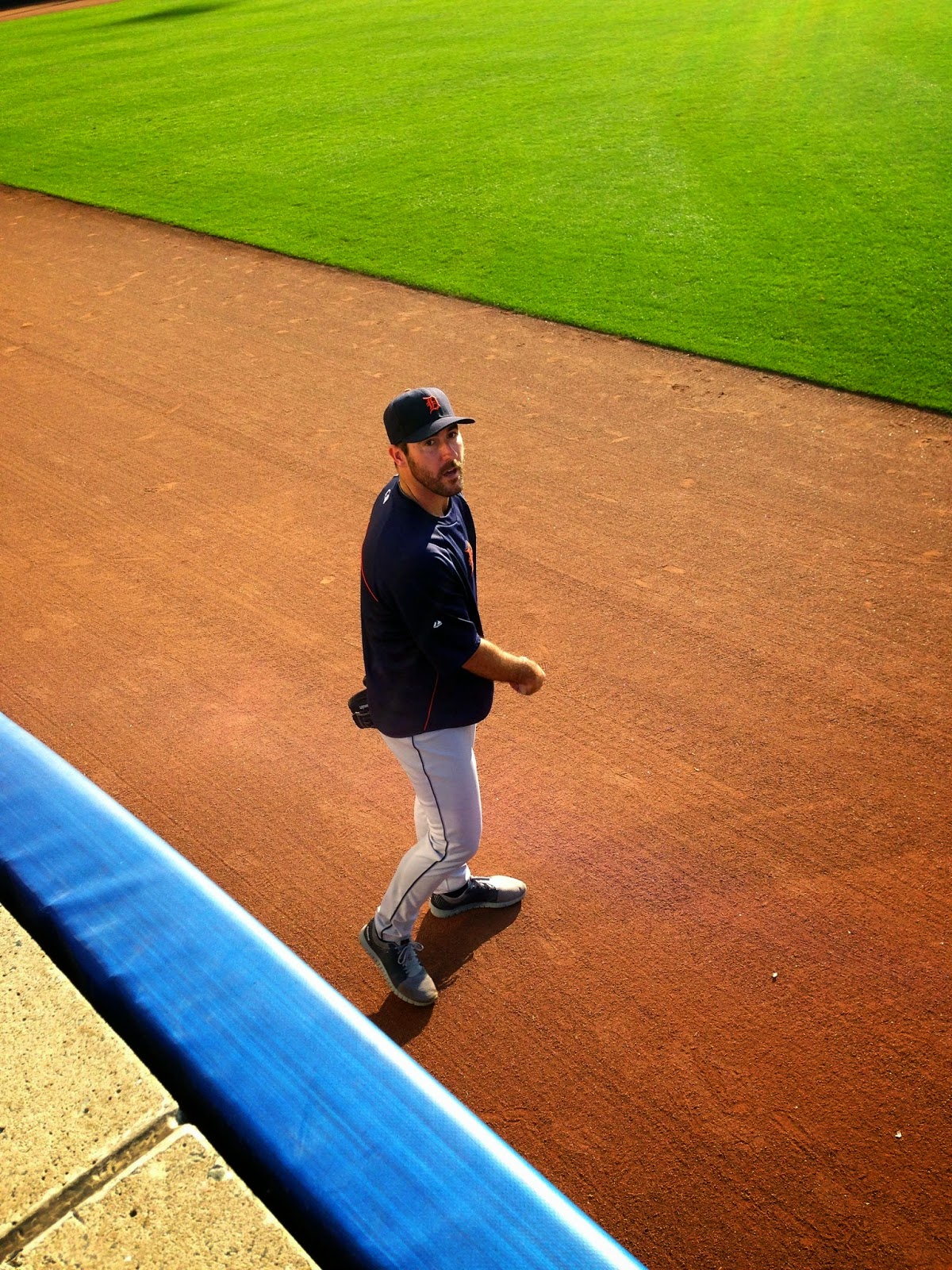 I don't know if any of you saw this, but last night Justin Verlander flipped his renowned girlfriend Kate Upton a baseball. It just so happens that she was the second young blonde he threw a ball to that day, because before this happened, Justin tossed my sister a ball! My dad yelled to him that it was his daughter's first Yankees game (which, by the way, it was), and Justin came over and tossed her the ball! It was a nice moment for sure, and I just so happened to catch it on camera! After my dad let two Miggy Cabrera blasts roll past his fingertips, we finally got ourselves a souvenir, one Diana will have for the rest of her life. 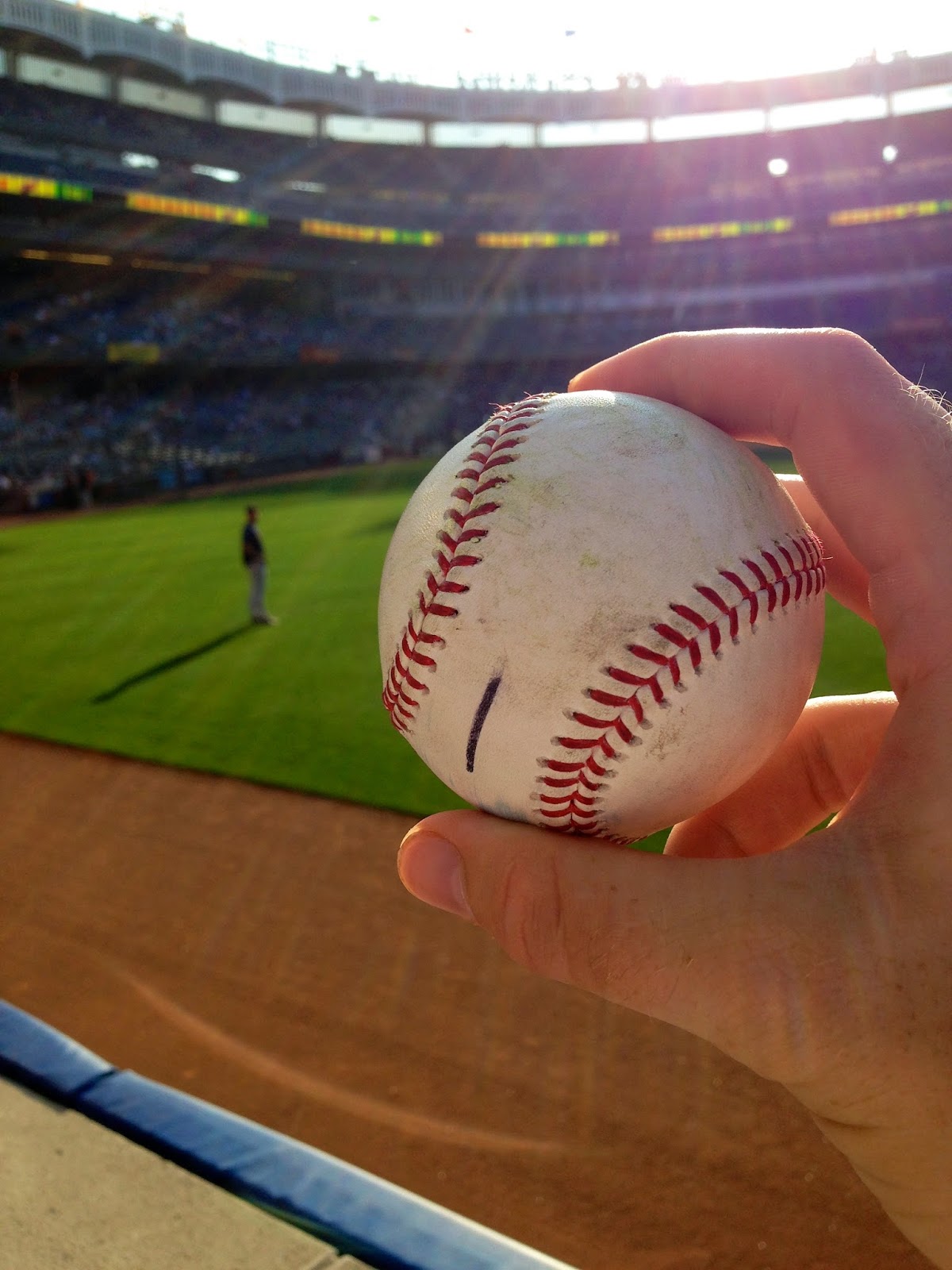 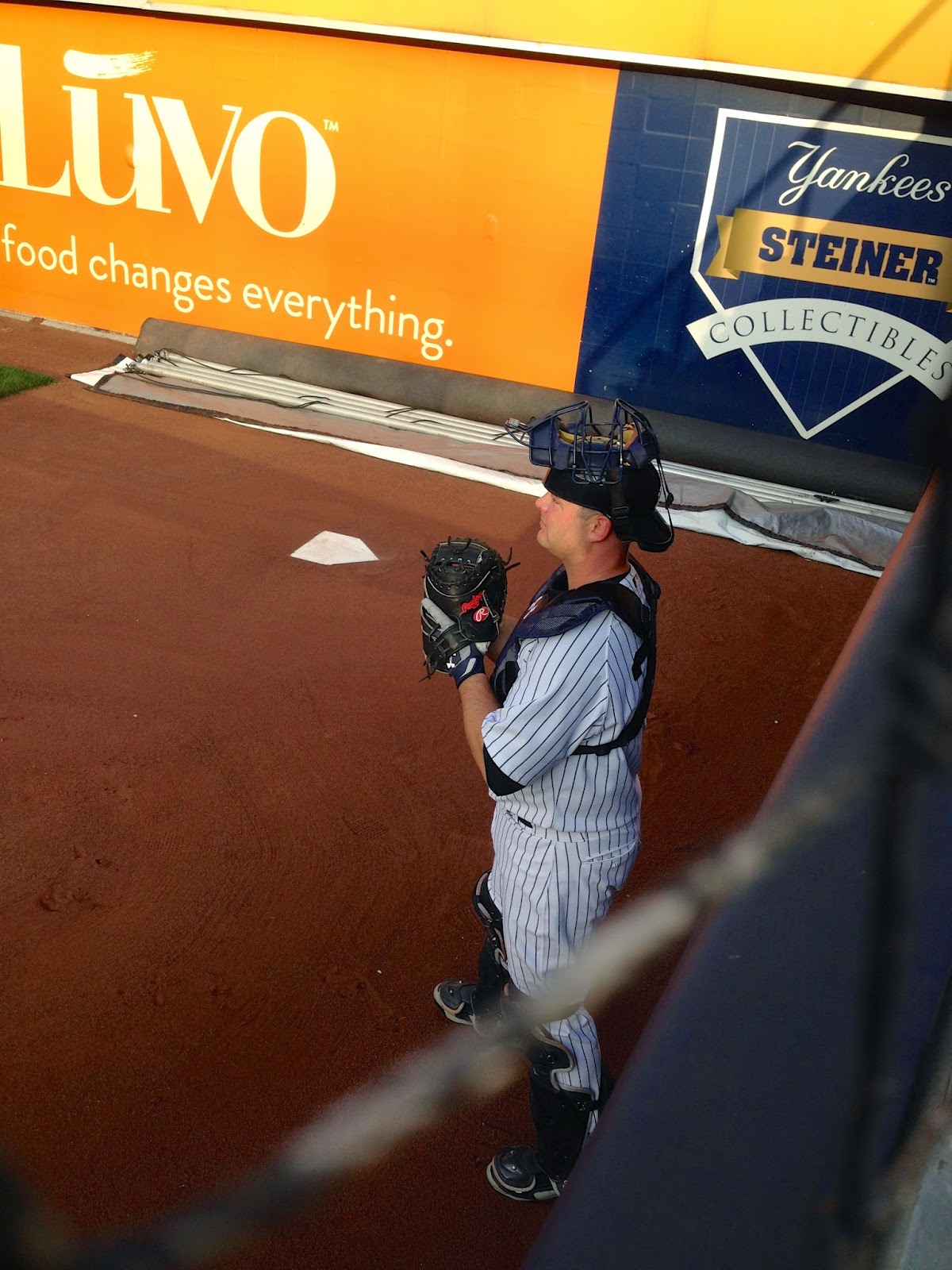 One of the best parts about having the seats we had is the atmosphere. At this section we're directly in front of the bleacher creatures, extremely close to the right fielder throughout the game, and right next to the Yankees bullpen. I said hello to Francisco Cervelli and Brian McCann last night as the pitchers got loose, and both players responded back to me! I love hearing the pop sound when the ball hits the glove in the bullpen, and from that spot we are right in the action of the pitcher getting loose! 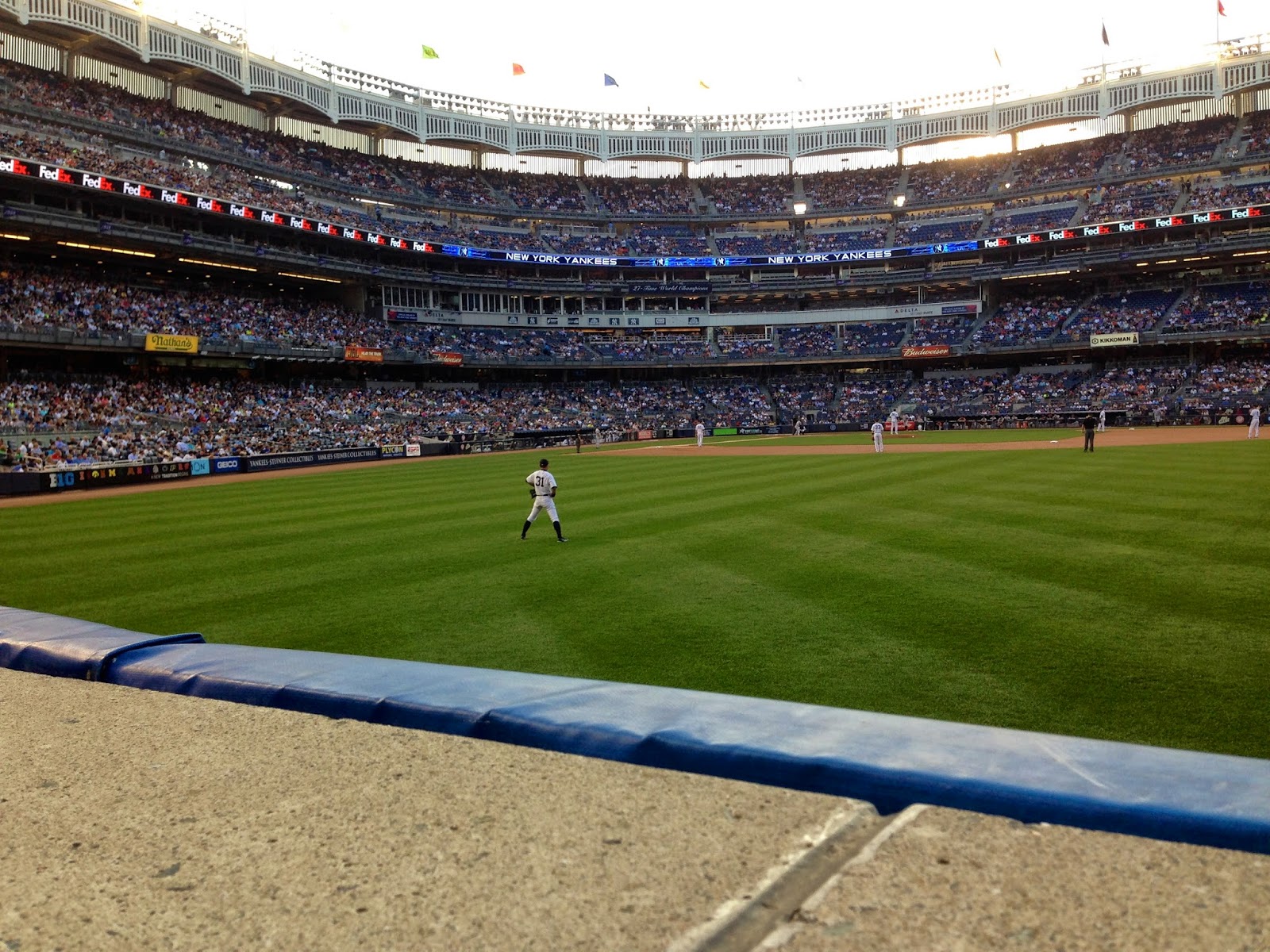 We were very pleased to see the Captain in the lineup this go round, especially since he wasn't in the lineup at the last game we went to. I tipped my cap to Derek each time he came to the plate, because who knows if this was the last time I'd ever get to see him play baseball. Mark Teixeira was a last second lineup scratch, but it worked out because rather than hanging out with Martin Prado all night, we got Ichiro instead who took Tex's place in the lineup! From being right by Ichiro all night, I realized just how small he was, and how locked in he was during the game. He's as professional as it gets, and it was really cool to get to watch him play also before he calls it quits. 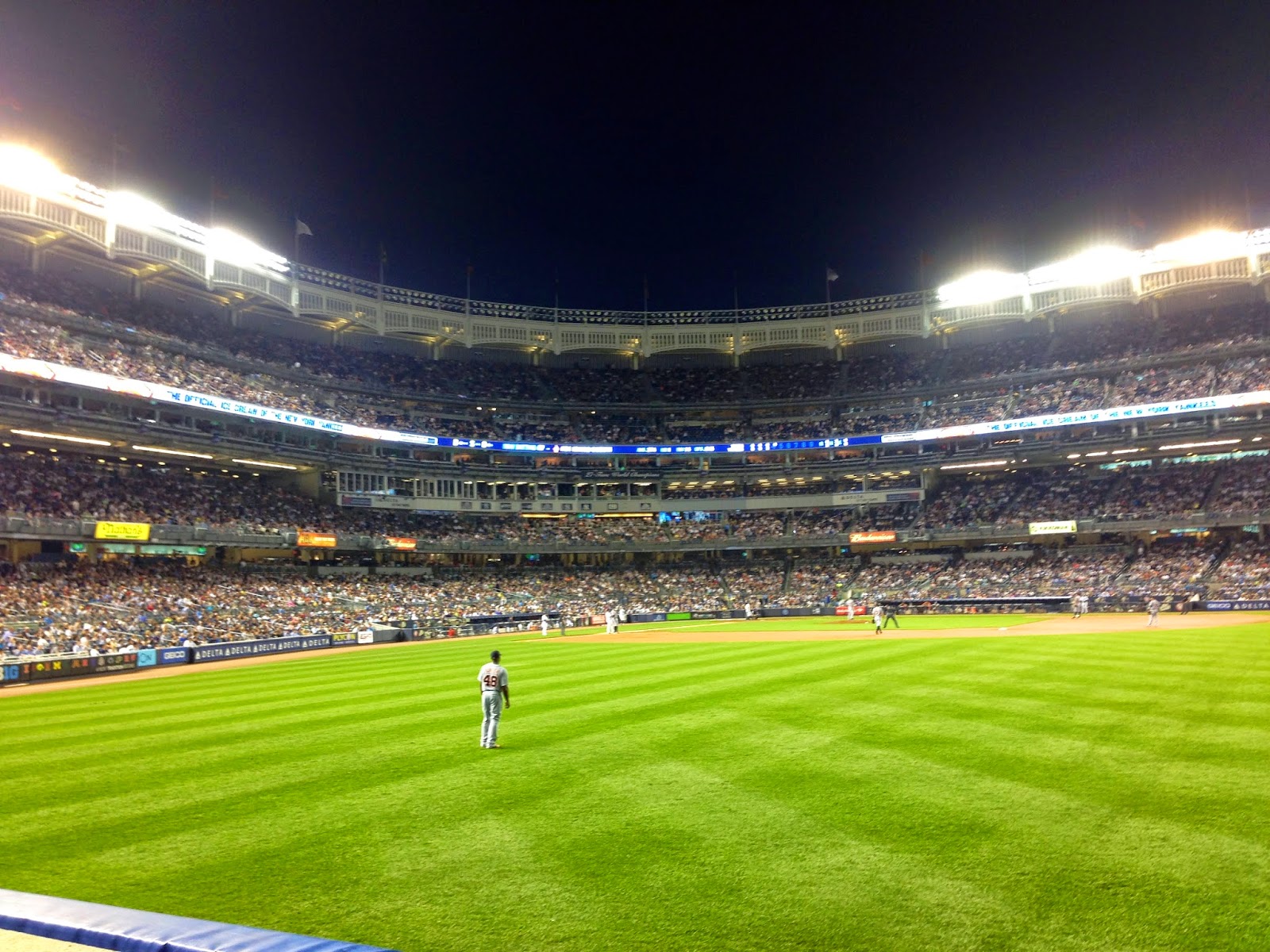 We were extremely spoiled in right field that night, because we also got to see Torii Hunter up close too. I've always had a tremendous deal of respect for Torii, and I thought he was one of those universally loved players coming from a dark era in the game. However, the hammered guy next to me didn't seem to feel the love, and let Torii know it all night. I have to admit, the guy was pretty funny ragging on Hunter, but after a while the joke got old and annoying. Hunter responded to the guy with hand gestures saying how he's fat, ugly, and short, which got a big kick out of the right field crowd.

Brian McCann and Jacoby Ellsbury drove in the lone two Yankees runs, but Brandon McCarthy was able to hold off the terrific Tigers offense to 1 run over 5 2/3 innings and earned himself the victory. Ellsbury could've had much more on the sac fly he hit with the bases loaded had it not been for the incredible catch made by new Tiger Ezekiel Carrera. I've never seen a better defensive play in person before, and after watching the highlights I firmly believe that catch should be nominated for one of the finest of this season!

Matt Thornton (no longer a Yankee), Adam Warren, Shawn Kelley held the game for David Robertson to finish off in the 9th for his 30th save! It was a big win for a hot Yankees team against one of the best in the business, and Brandon McCarthy impressed me a lot. I don't think the Yankees have the pitching to go deep into the playoffs, but who knows if Tanaka will come back and help the cause down the stretch. 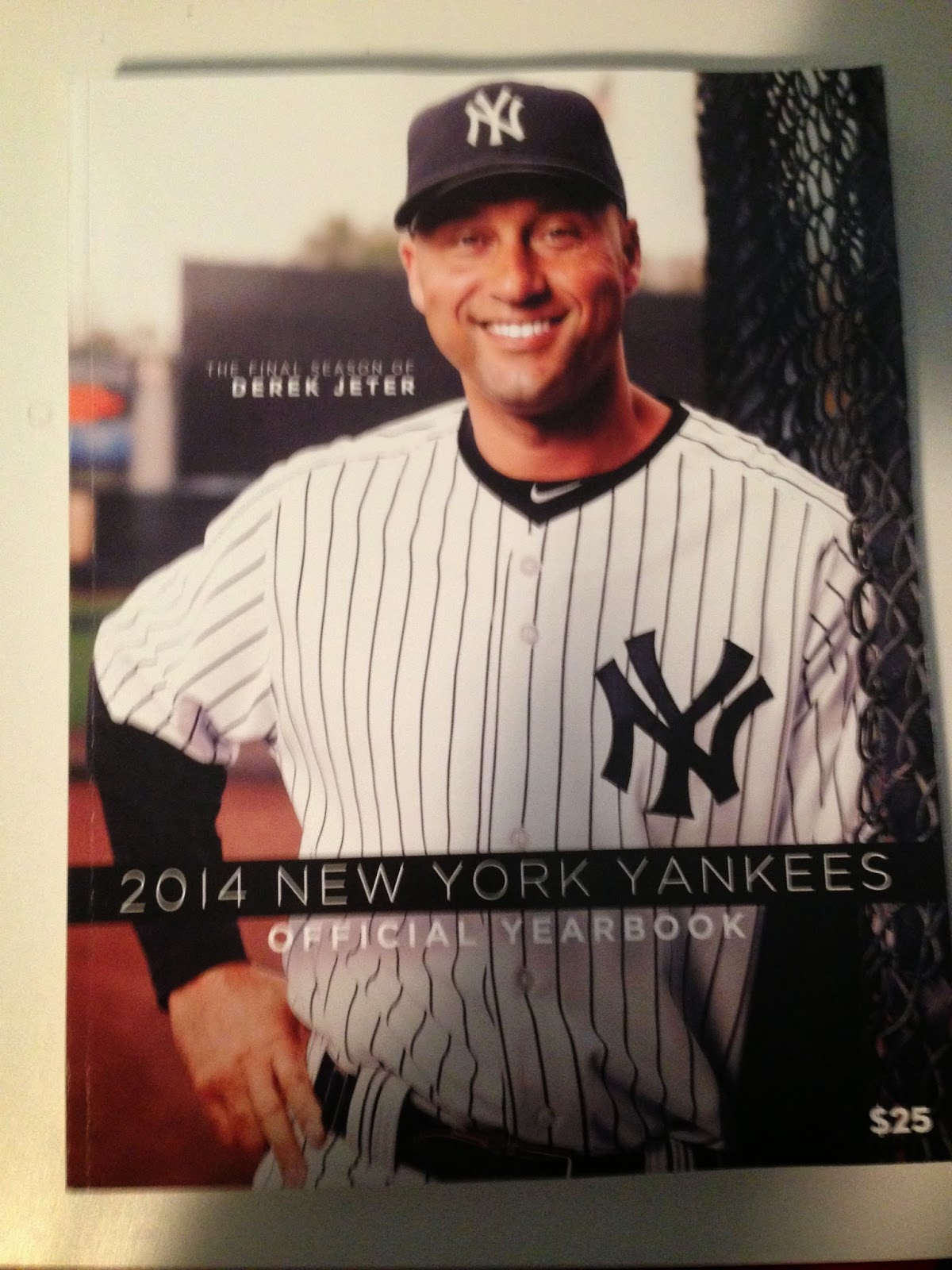 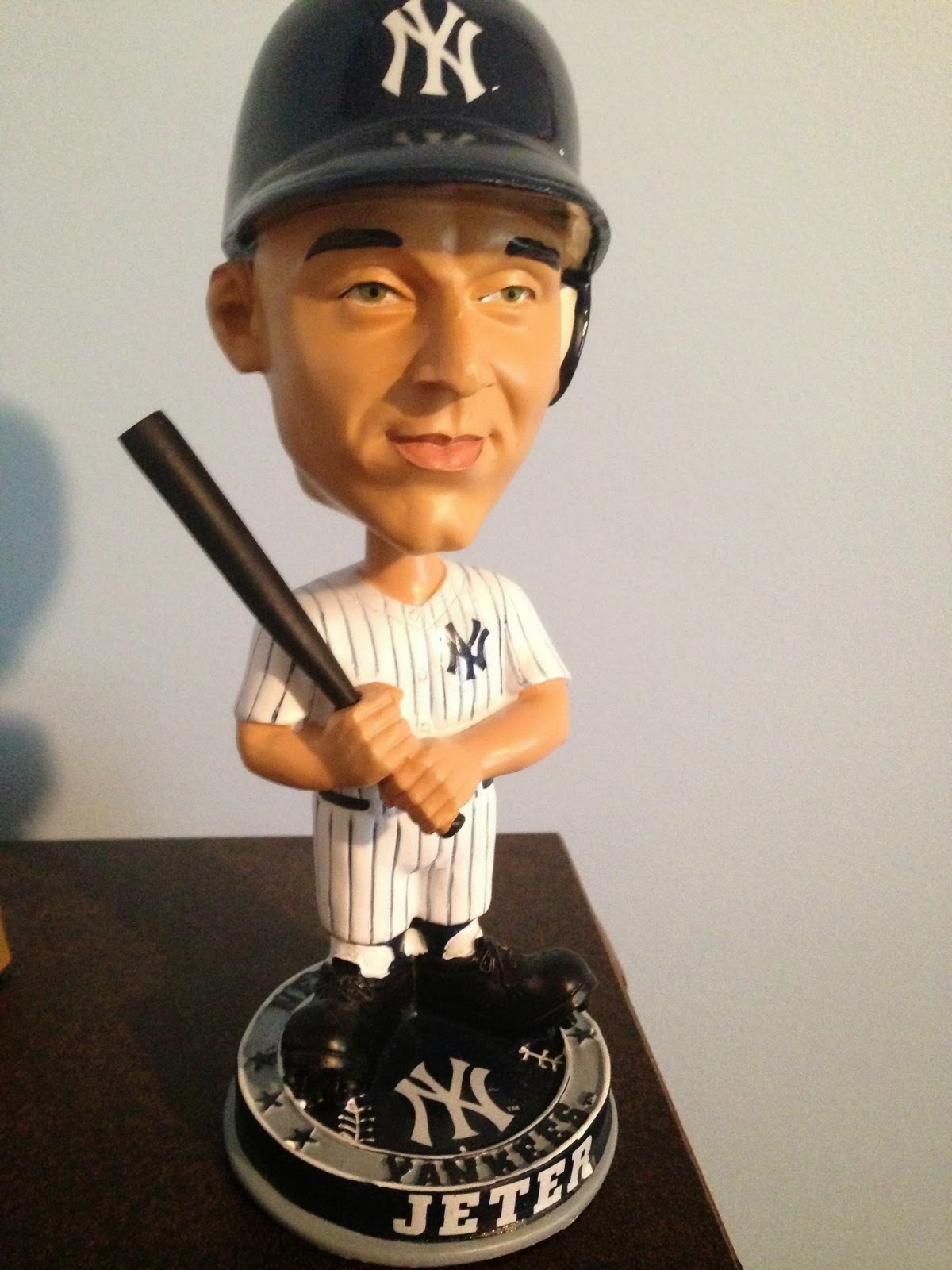 On top of getting to witness a great game, I added two things to my Yankees collection, the 2014 Yankees yearbook and a Derek Jeter bobblehead! I didn't get around to purchasing the 2013 Yankees yearbook yet but plan on adding it soon, since I have the yearbooks dating back to 2005 when I first started following the team. My dad bought me the Jeter bobblehead, which actually resembles him a little bit! I've been adding a few bobbleheads to my collection here and there lately just for fun, and no collection could be complete without my favorite player of all time.

I had an amazing time with some of my favorite people last night, and if this was the last time I got to see Derek Jeter play, it's been an unbelievable run. RE2PECT.