My First Trip to AT&T Park! 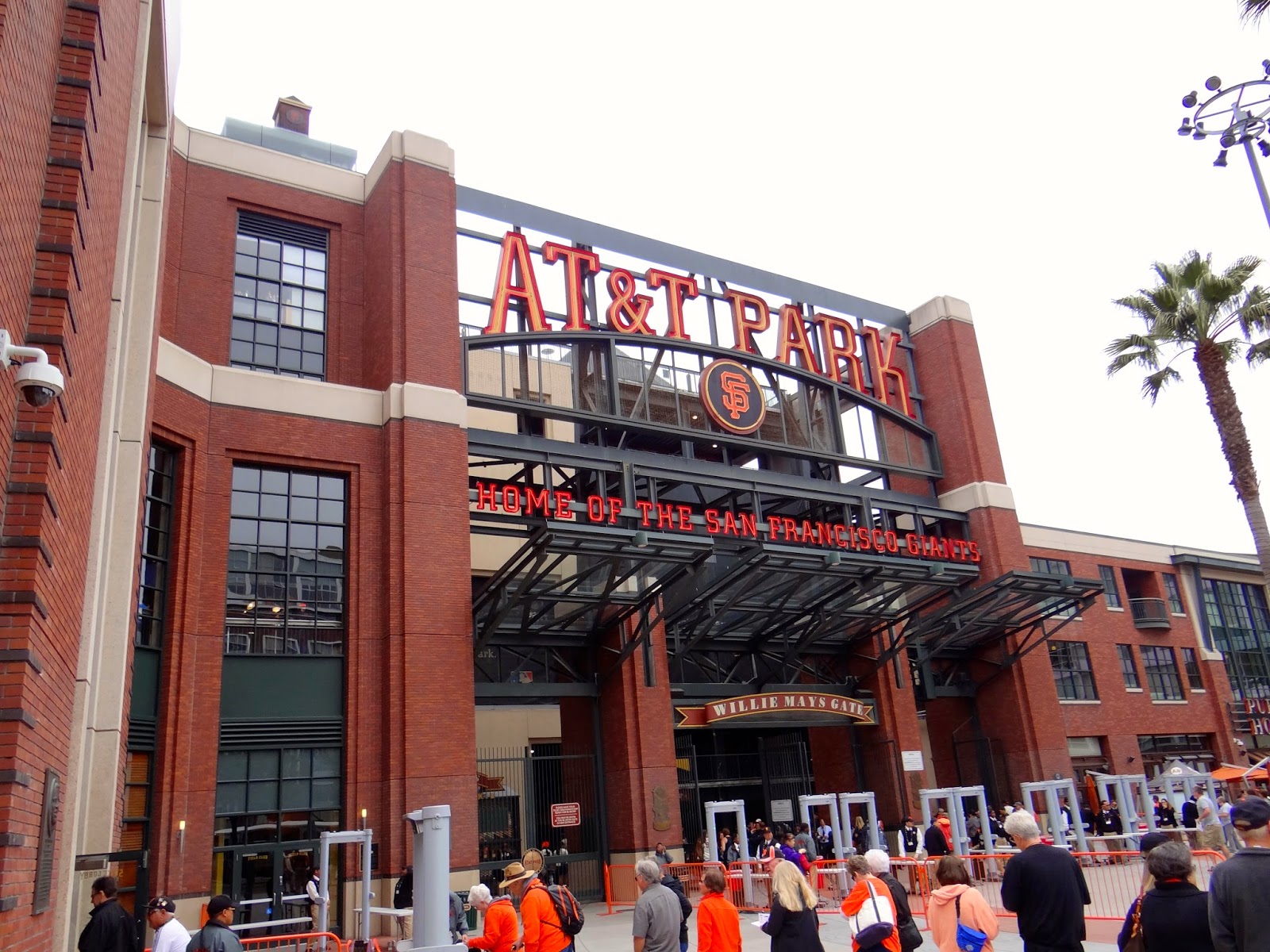 Hey guys, Drew back here, and I am currently in the heart of San Francisco to bring you some pictures from the Giants-Diamondbacks game I went to Saturday! It was probably the least exciting game of the 3 game set, and the Giants ended up losing 2-0, but it sure was an amazing experience!

We've been in California since Thursday exploring the beautiful city of San Francisco, and prior to the trip we ordered tickets for my family to meet up with some relatives at this Giants game! There are a lot of incredible sights here, but I was most looking forward to seeing AT&T Park for the first time! I always loved the Giants' stadium; I remember watching Barry Bonds blasting home runs into McCovey Cove, and the 2007 Home Run Derby in which Vladimir Guerrero was practically crushing golf balls onto the fairway all night. I've also always had a lot of respect for the Giants organization, and I've rooted for them in their 2 recent World Series wins. So, it was safe to say going to a Giants game was on my baseball bucket list! 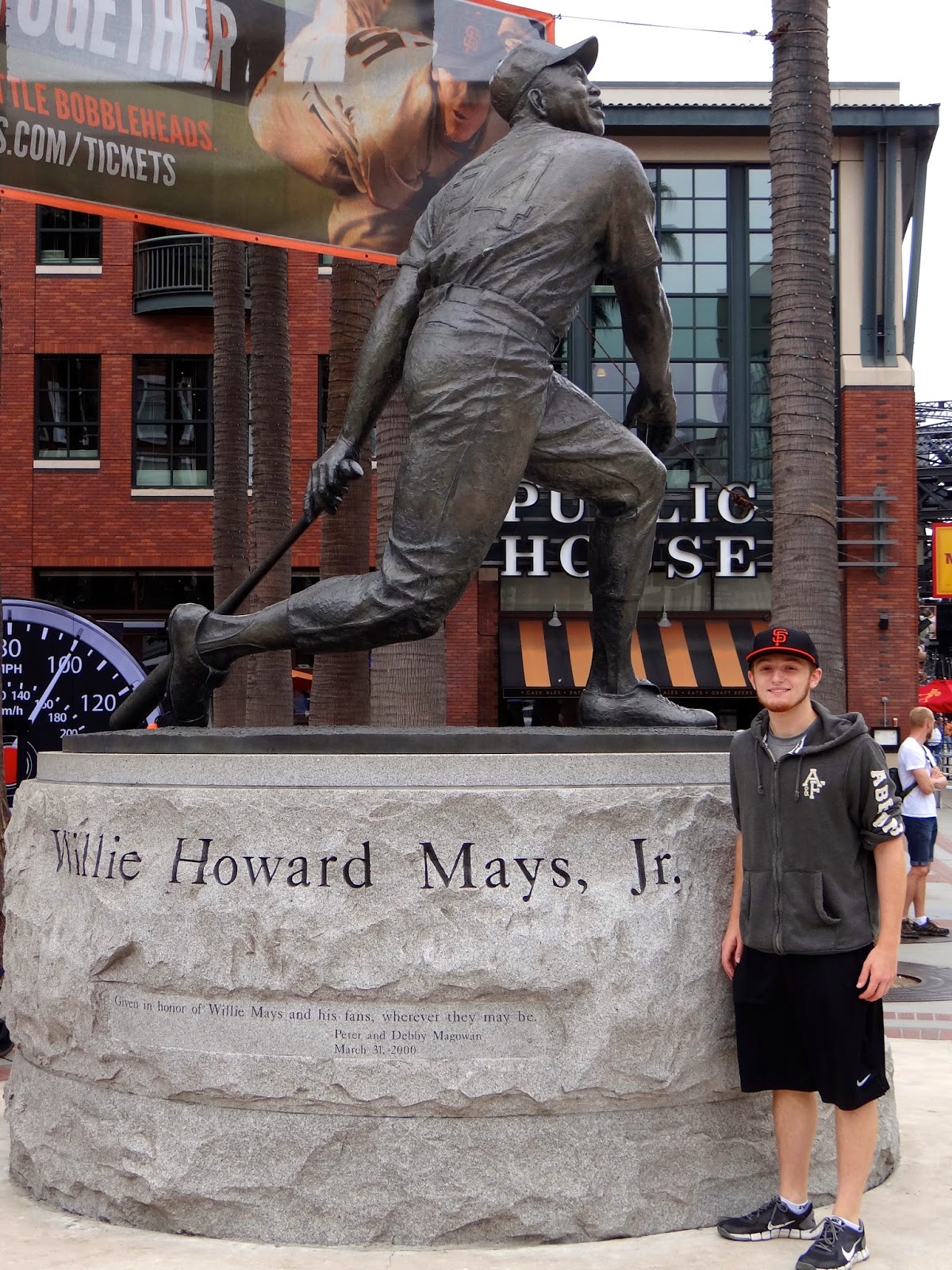 We walked around the outside of the stadium for a while, getting to check out all of the amazing statues of former Giants legends! I consider Willie Mays to be the best all around player in baseball history, so seeing his statue in person was especially amazing! 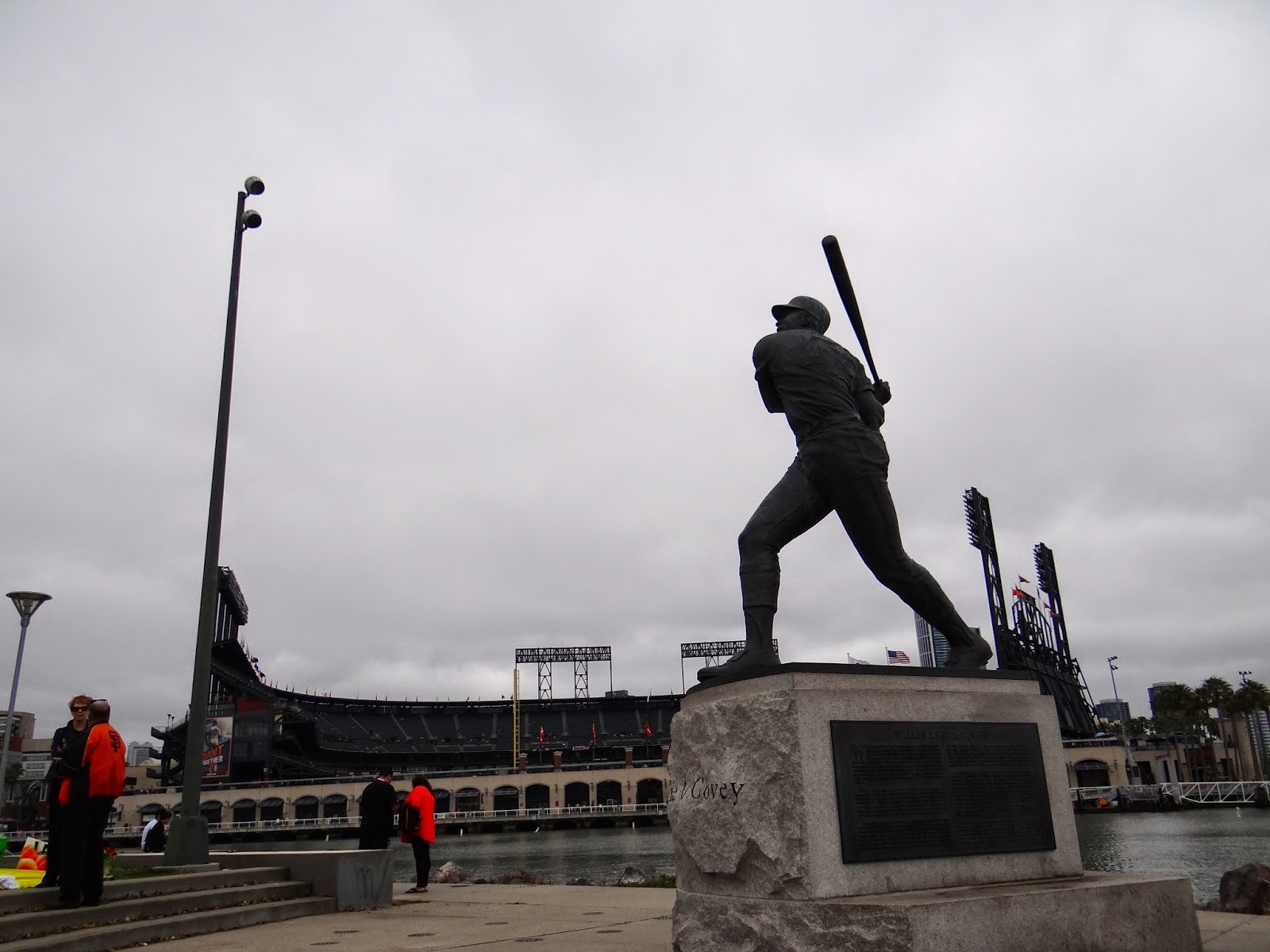 We next walked across McCovey Cove on a bridge to meet Willie McCovey's statue! I didn't realize how far this statue was from the stadium itself, but it was worth the walk without a doubt. 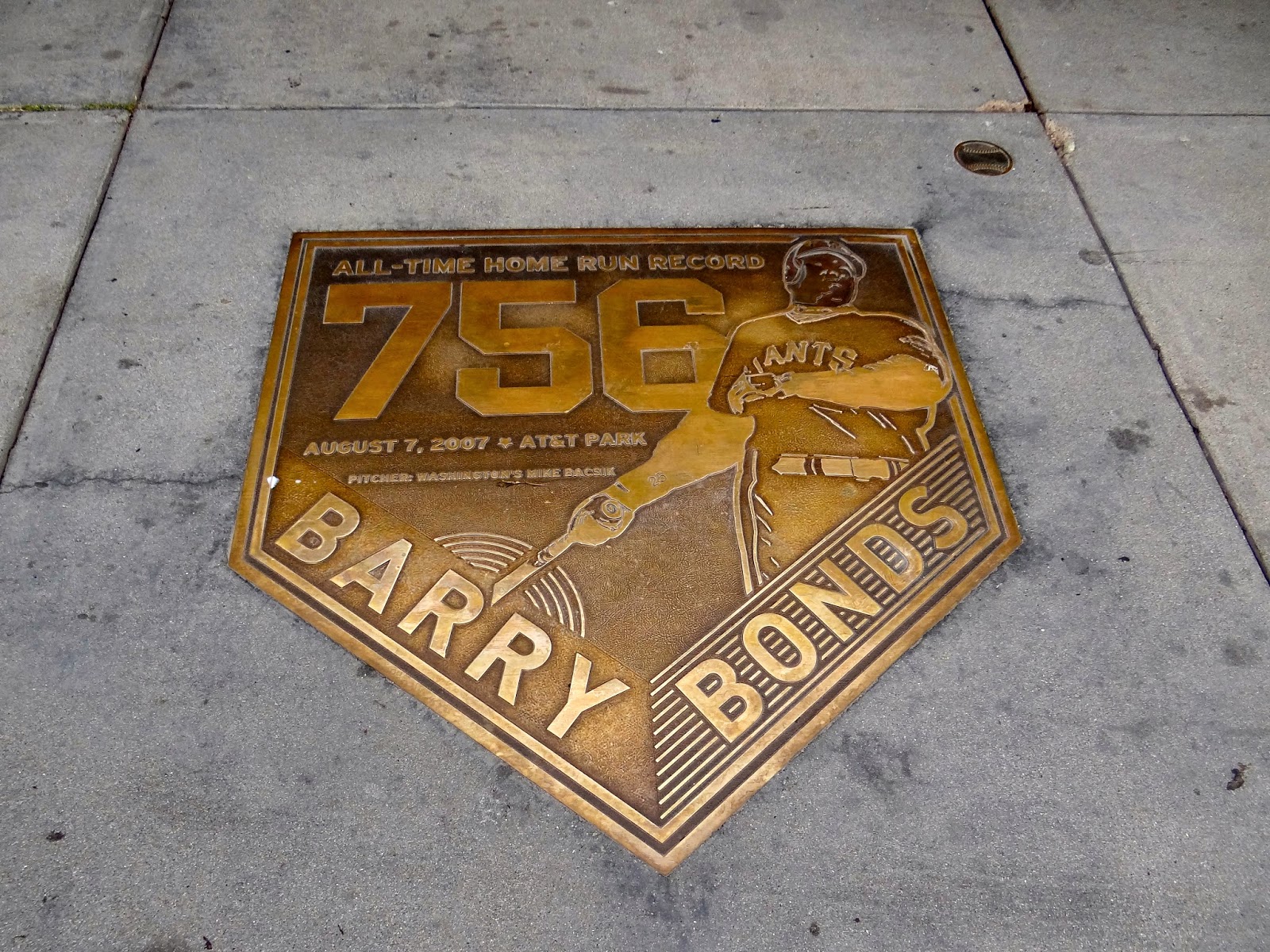 Behind the stadium were some plaques on the ground, including this one dedicating Barry Bonds' record breaking home run. I don't have much respect for Bonds, if any, but he is the home run champ and it is a part of history whether we as fans appreciate it or not. 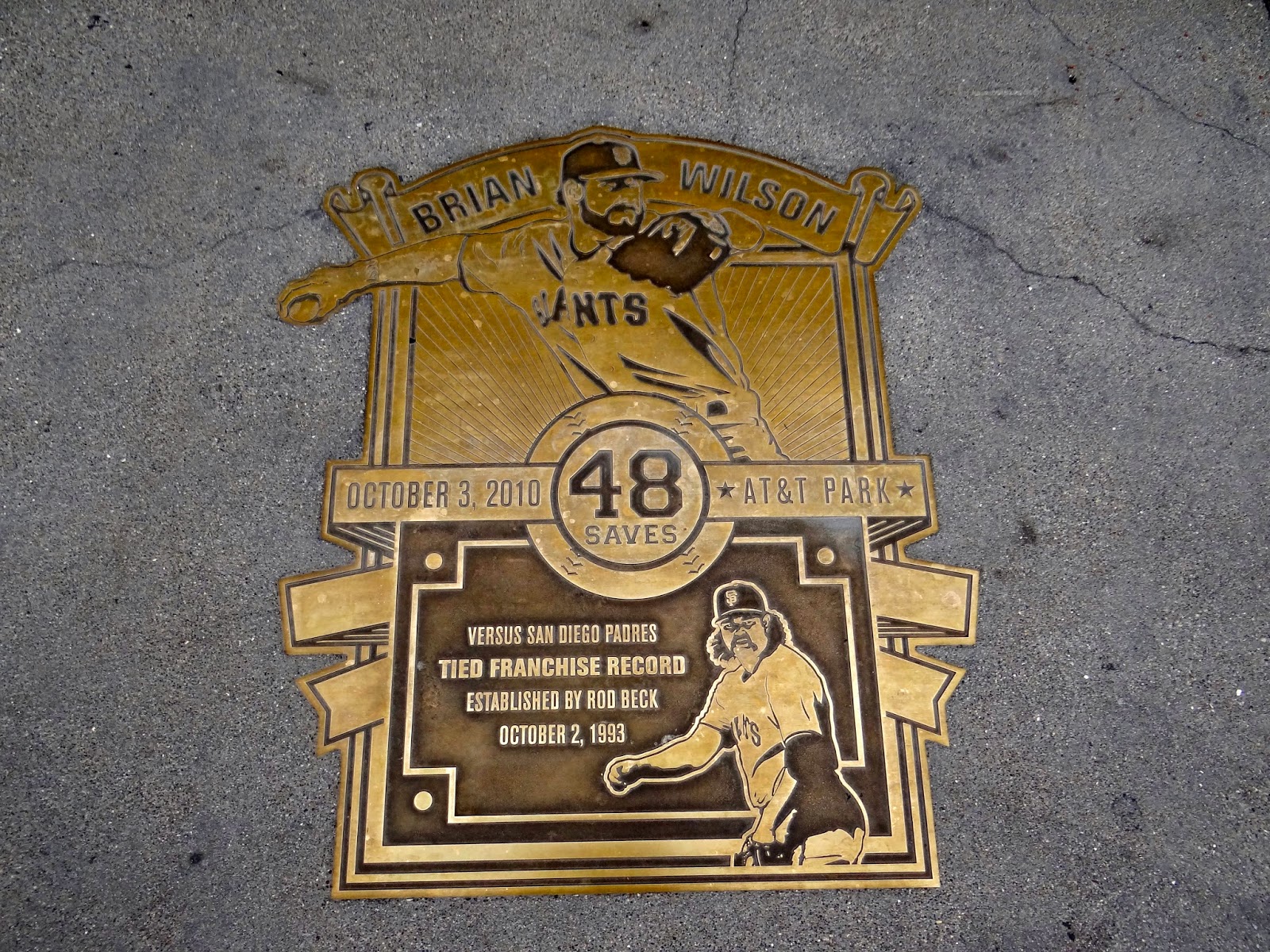 Brian Wilson, in the meantime, was one of my favorite Giants players growing up! He hasn't done much in LA, but he certainly made his presence felt in San Francisco during his tenure with the team. This plaque dedicated his 48 saves in 2010, which became a Giants franchise record. It doesn't look like Sergio Romo will be matching that this season, but I guess crazier things have happened. 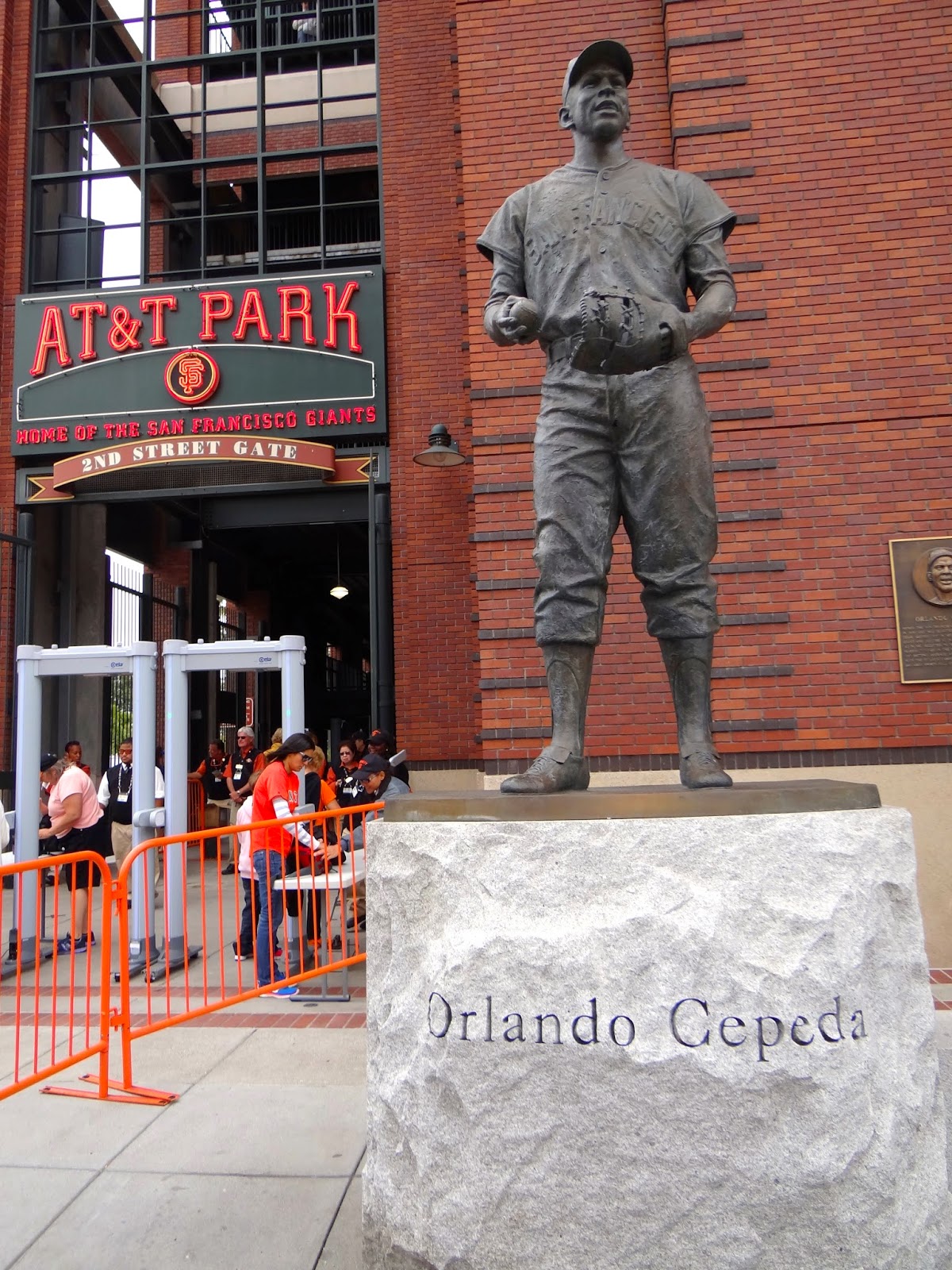 "The Baby Bull" Orlando Cepeda never did a whole lot for me. I've seen him in person a few times over the course of my life, but I've never really wanted to pay to meet him. Regardless, this statue is pretty nice, and it greets fans entering the 2nd Street Gate.

And then, we entered the stadium, and here is exactly what I saw. If that isn't the prettiest thing you've ever seen I don't know what is. This was a view from our seats, which were really, really nice! So nice in fact that I was able to get a few really cool close up pictures! 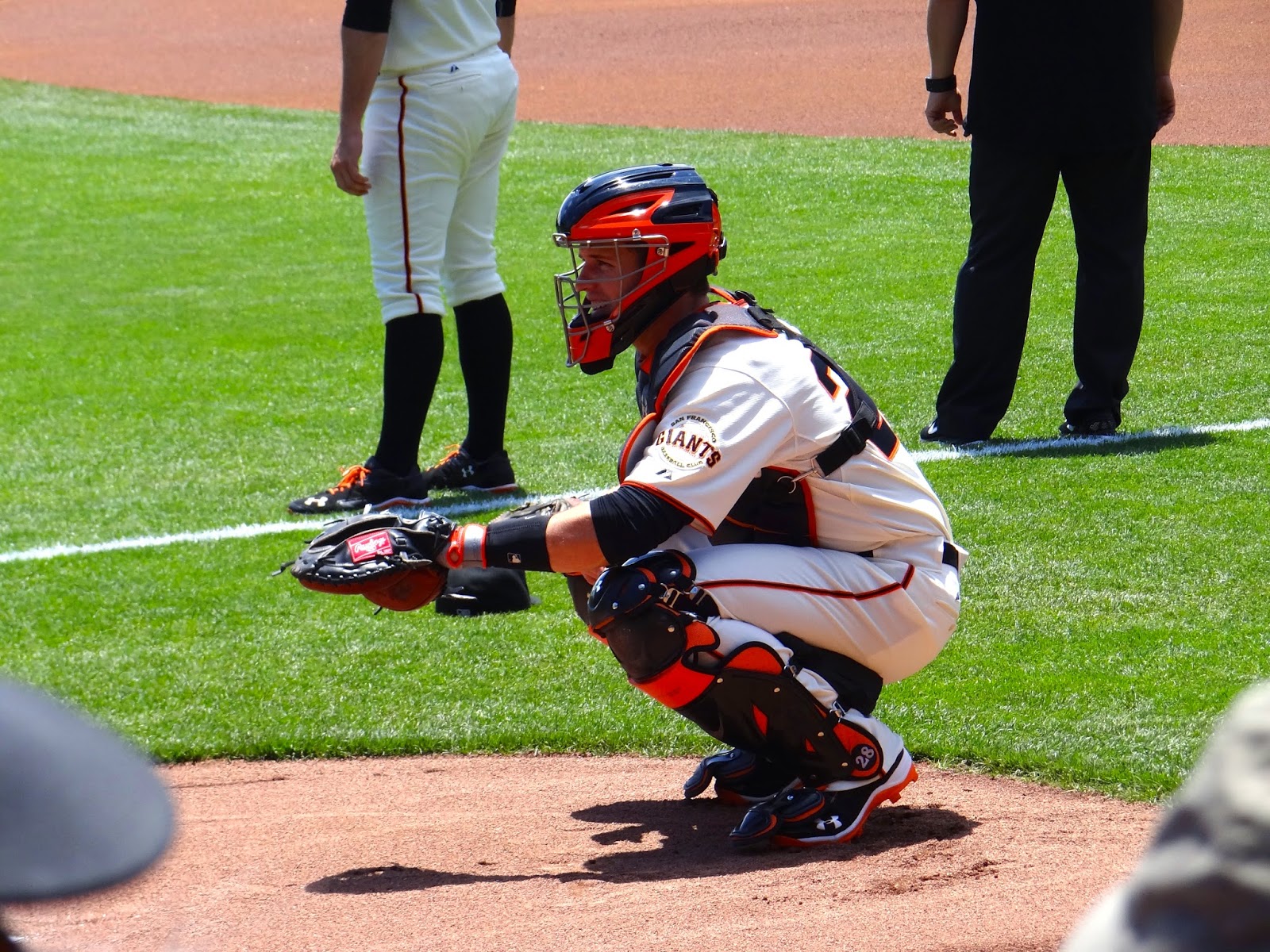 I may sound like everyone else, but Buster Posey is my favorite Giant. Ever since I got his autograph through the mail the Spring Training prior to his rookie season, I've rooted for him. The best feeling is rooting for someone who signed for you before they make it big, and that's exactly how it worked out with him. 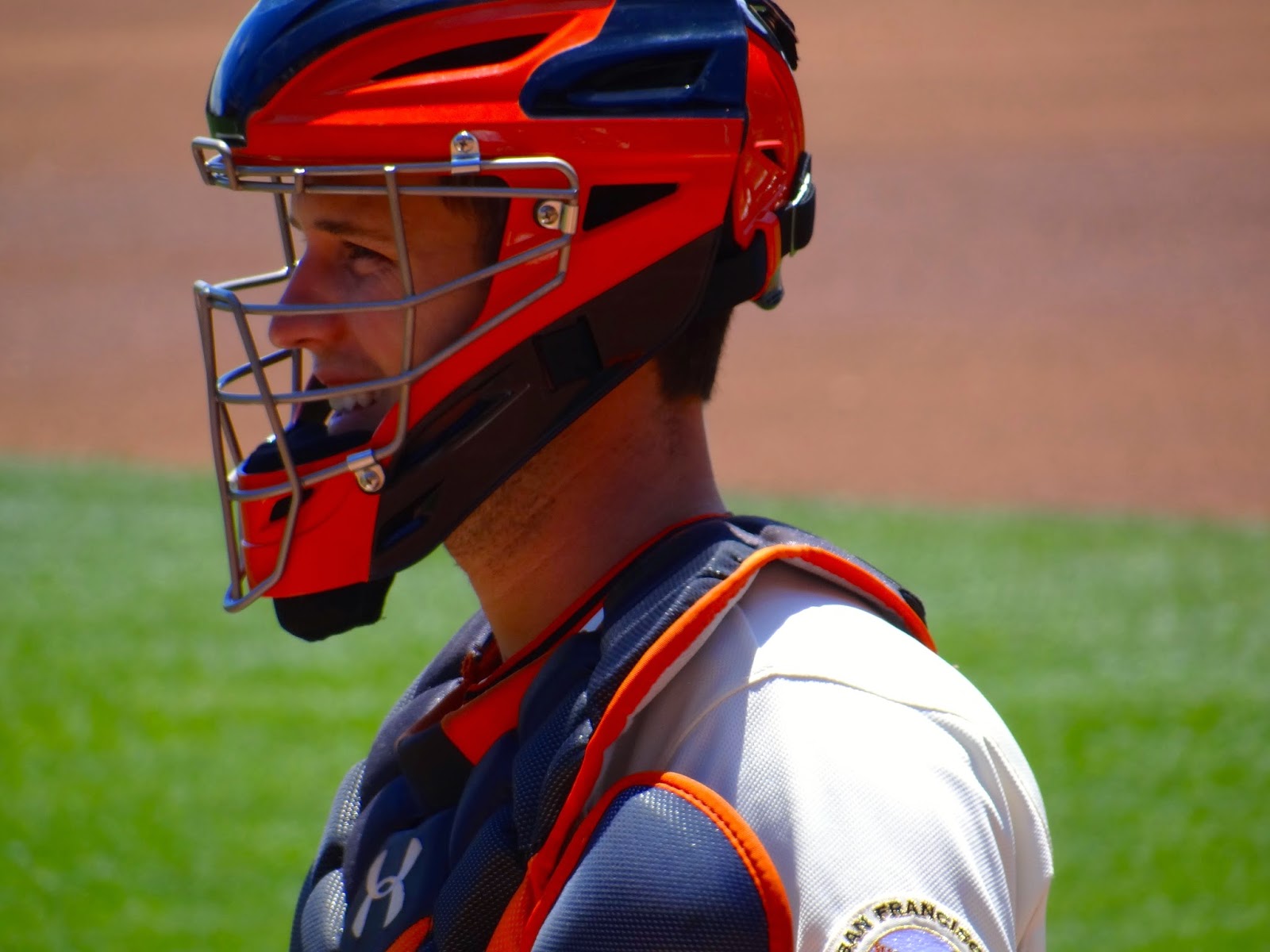 I'm pretty proud of this shot. 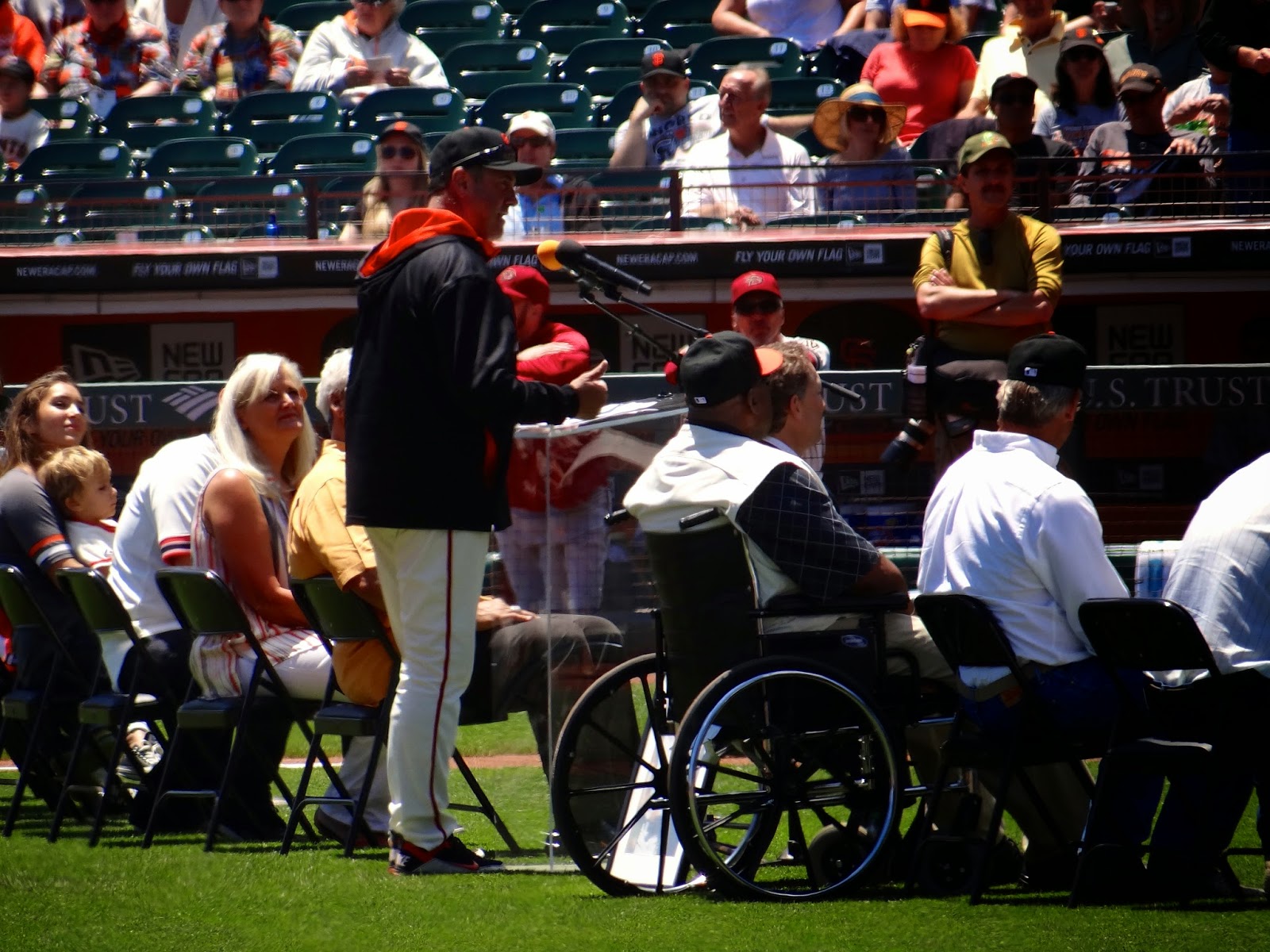 We got into the stadium a little late because we were waiting for the rest of our family to arrive, but we got in to hear some of the ceremony they had honoring former pitcher Dave Dravecky, including Will Clark's quick speech! I'm almost positive the man in the wheelchair is Willie McCovey, but we didn't get to see the introductions and they didn't say anything after we sat down regarding him. I really wish we got in sooner so I could have seen that, but I guess I got to say I saw him in person anyway. 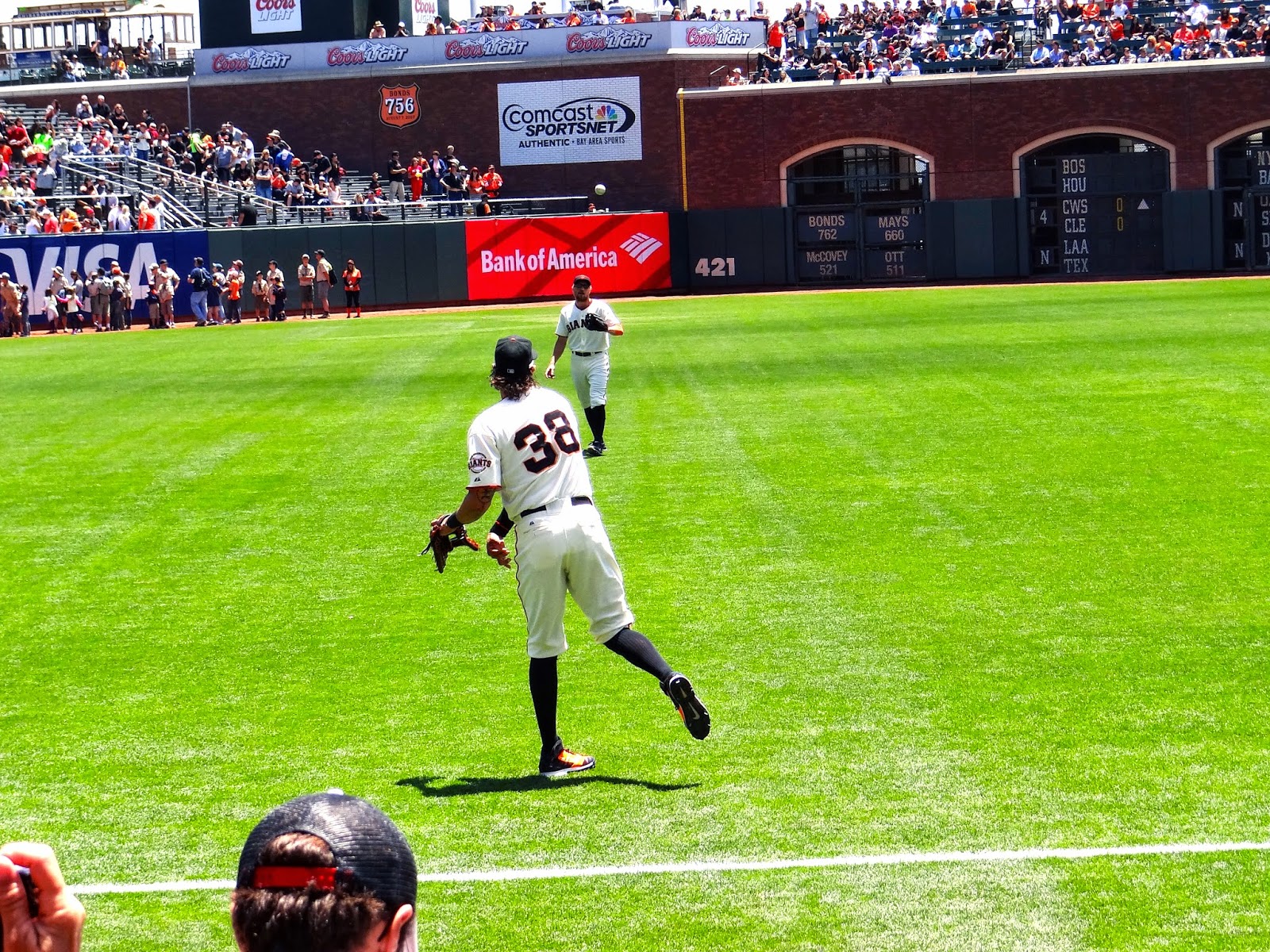 It was hard to focus on Dravecky's speech because the players were warming up literally right in front of us, so I snapped some pictures throughout the ceremony. Michael Morse and Hunter Pence are playing catch in the picture above. I never realized just how tall these two were! 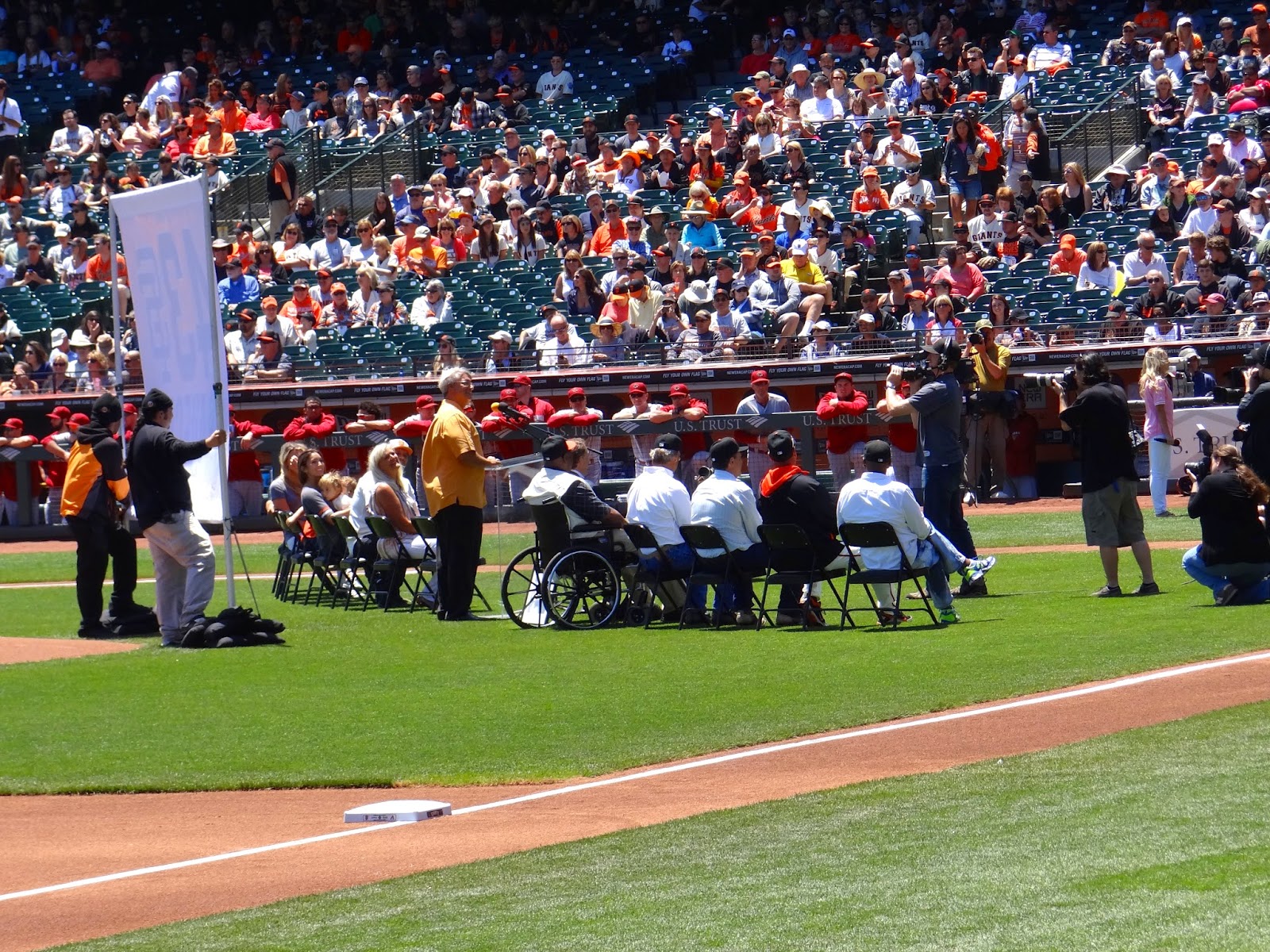 Dravecky's speech was touching to say the least. He suffered from bone cancer which led to his career being cut short far too soon, and eventually his arm deteriorated so much that it had to be amputated. The fans in San Francisco really loved him, judging by the roaring ovation he received after his heartfelt speech. 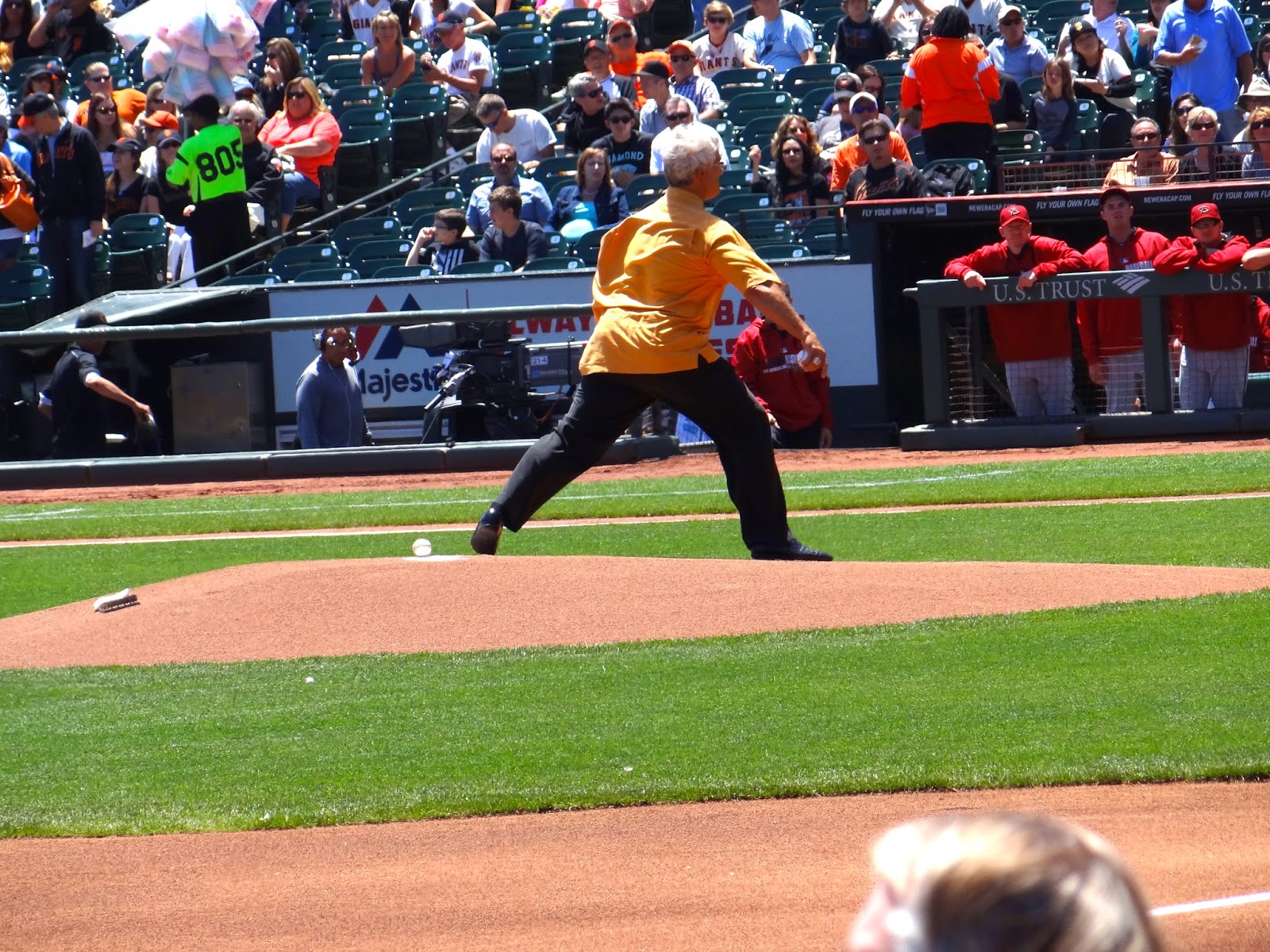 He went on to throw out the first pitch, and he pretended to throw the ball with his nonexistent left arm, and then actually threw the ball with his right arm. It was definitely a touching moment, and I think when I get home I'm going to write him a letter. 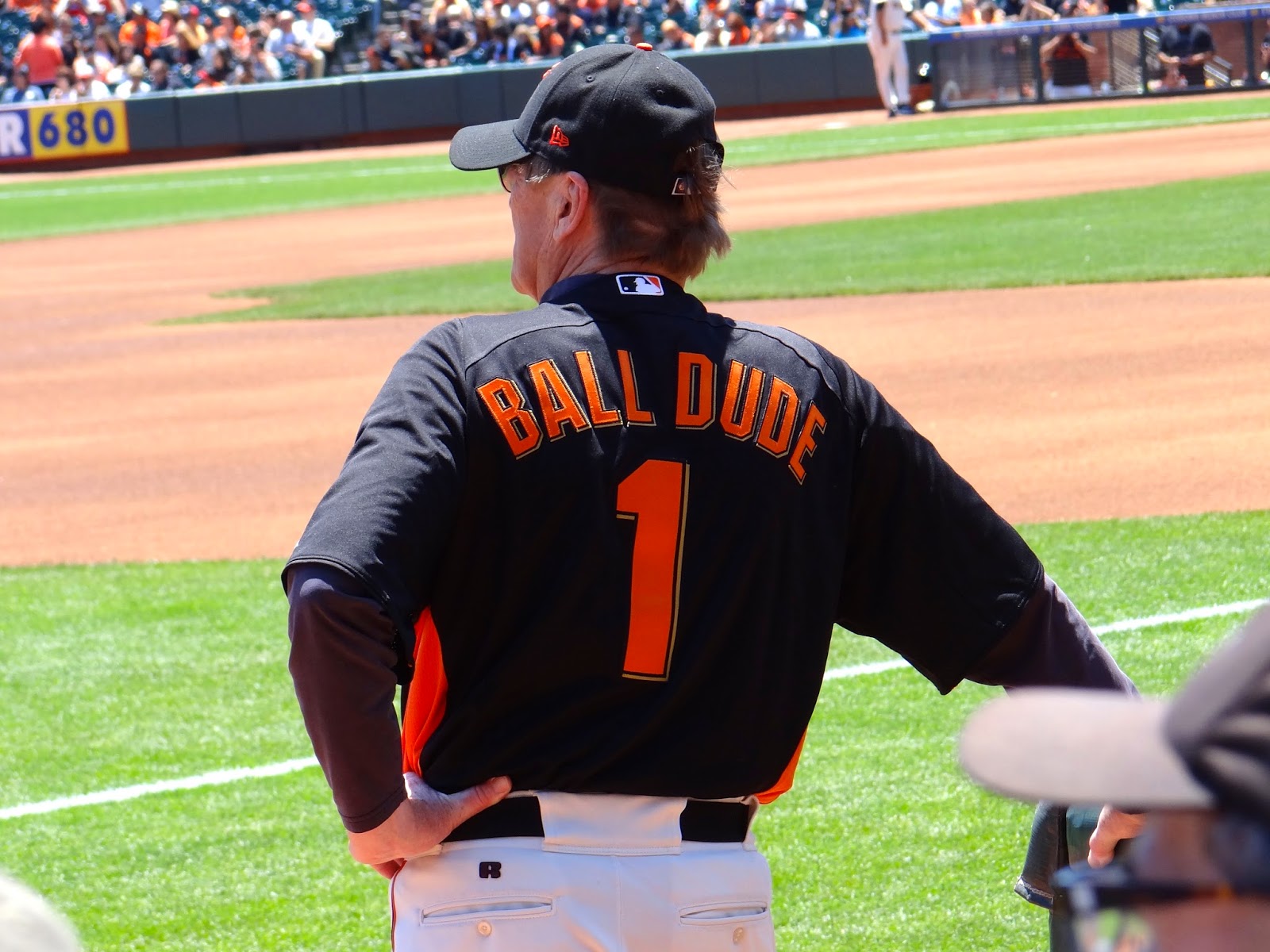 The Giants simply just know how to do things the right way. 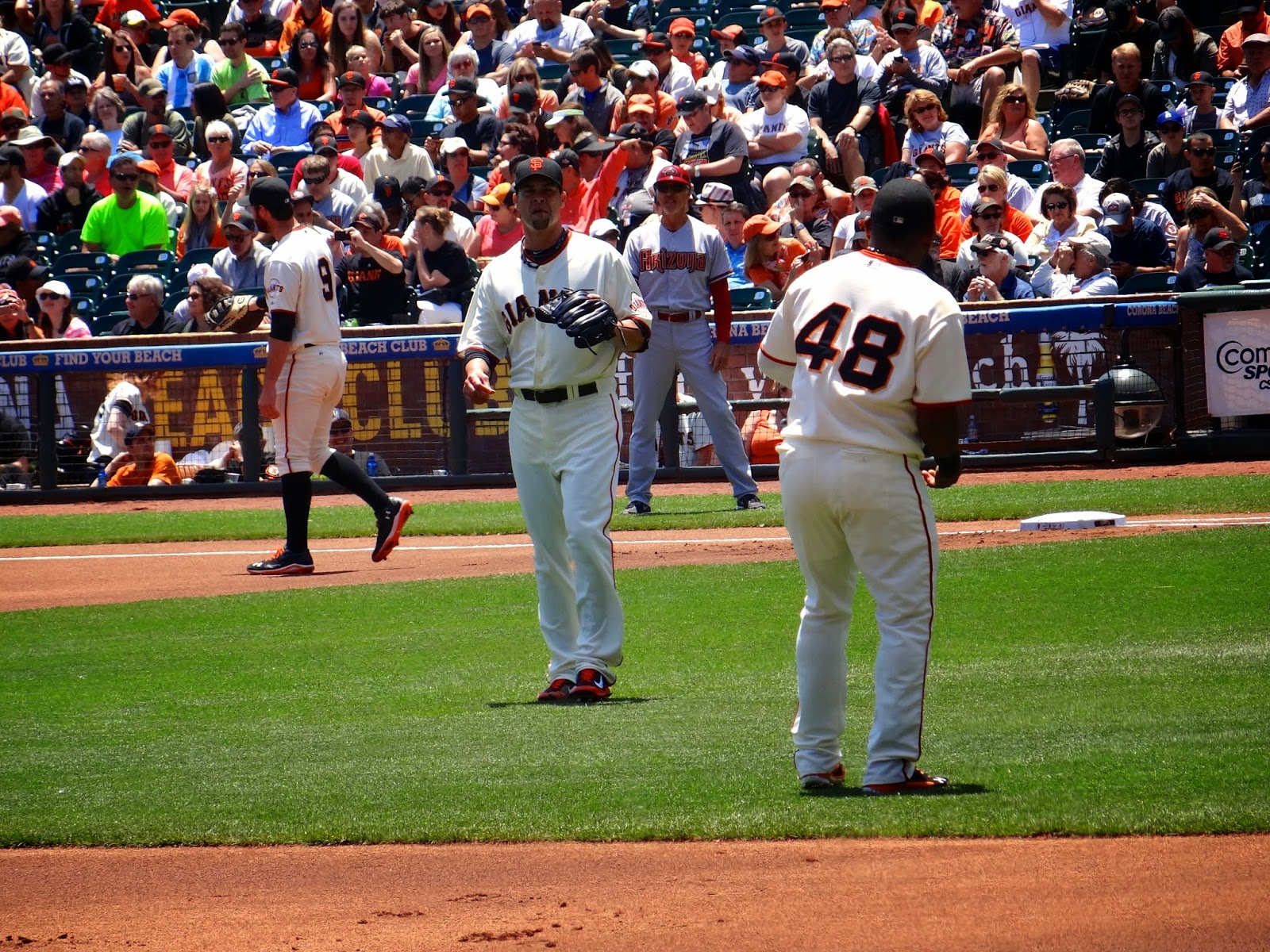 Ryan Vogelsong started the game for the Giants, and faced off against Wade Miley. The matchup wasn't supposed to be very enticing, but it turned out to be a pretty good battle. Ultimately, Miley got the last laugh, pitching 7 scoreless innings. "Vogey", as he's known to many Giants fans, allowed a solo home run off the bat of Aaron Hill, but otherwise pitched well also, especially with the help from some great defensive plays by Pence, Scutaro, and the Panda roaming 3rd base! 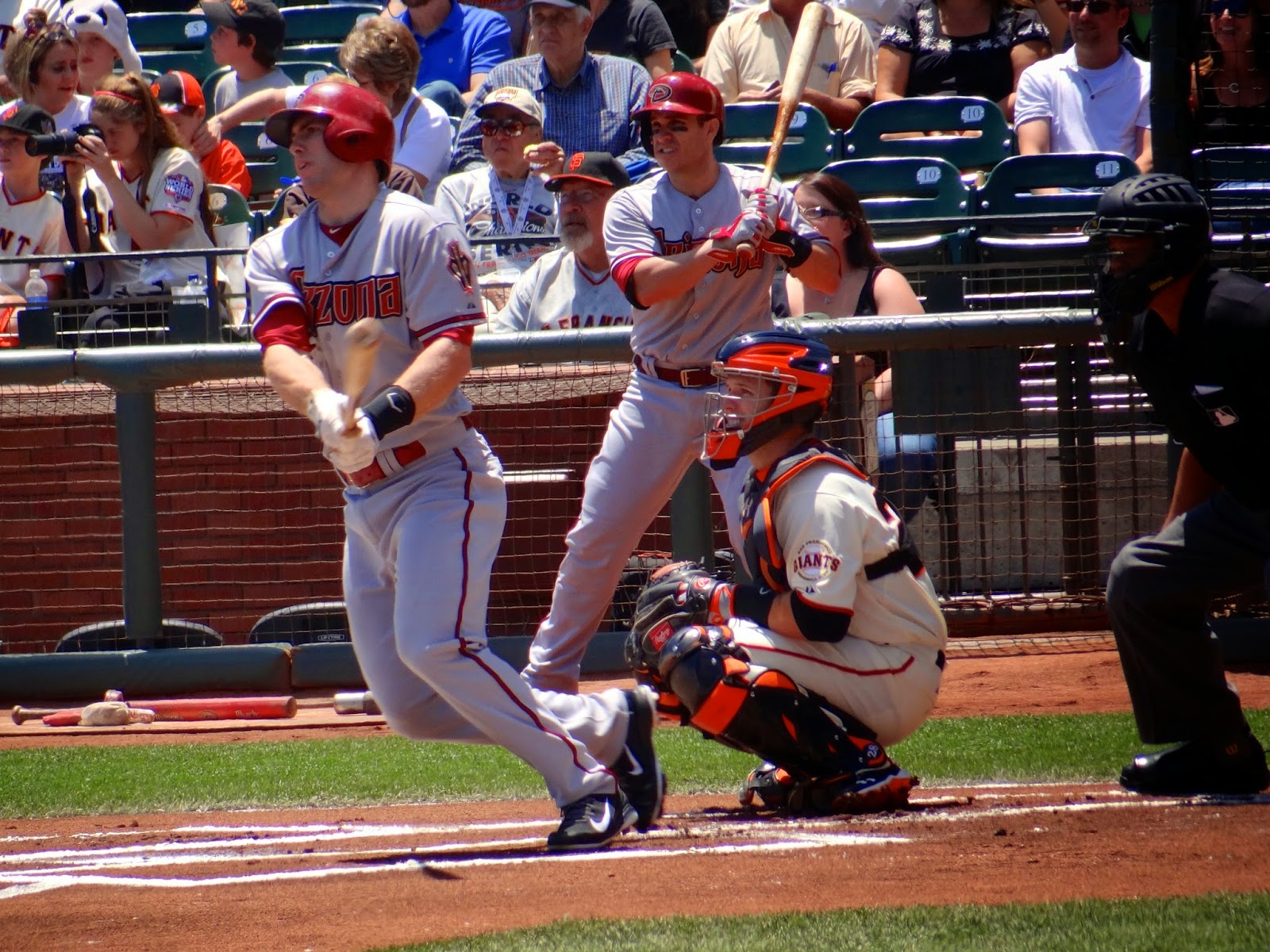 The Diamondbacks only major silver lining over the course of this season was provided from the guy in the picture above, Mr. Paul Goldschmidt. Goldy has been phenomenal these past two seasons and has evolved into the best 1st baseman in the National League! He ripped a double in the first inning and flashed his leather later on to put a halt to the biggest Giants rally of the day. 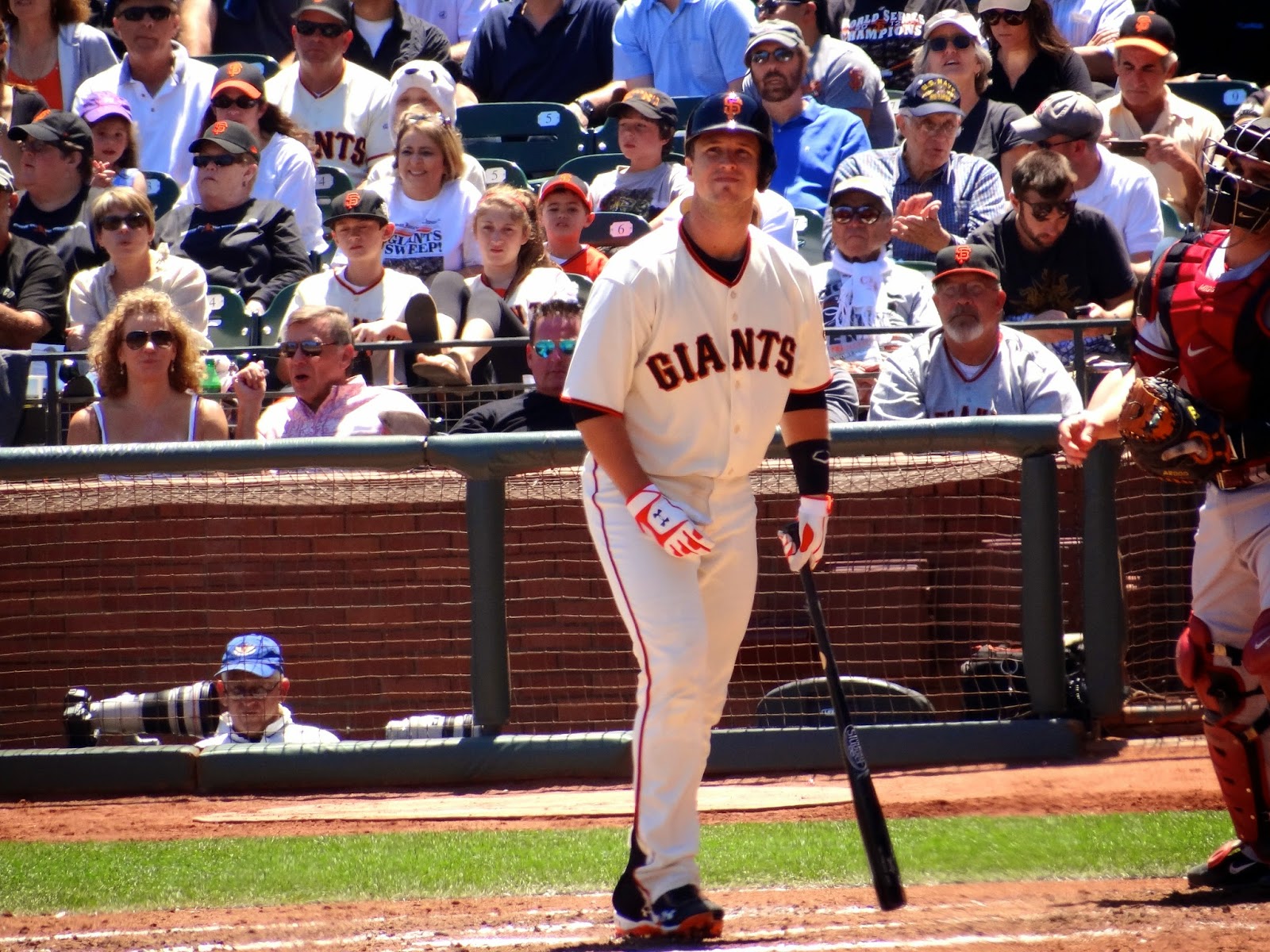 The Giants have been terrible since the beginning of the summer, to put it simply. The look on Buster Posey's face here after striking out says it all. Posey has had a really tough year, and it really showed when not one, not two, not three, but four other catchers had been named to the All Star team before he did. 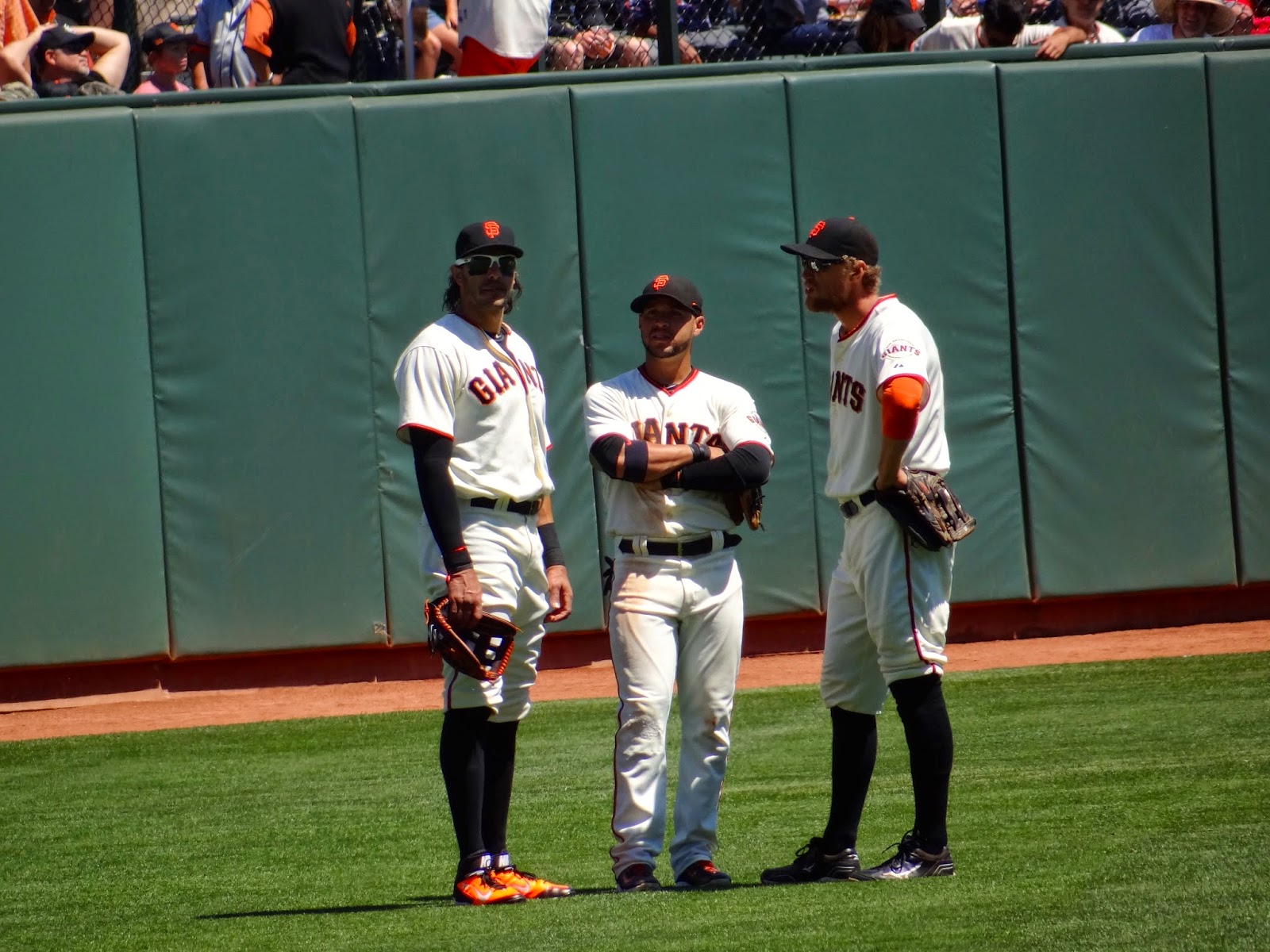 Despite their huge slide down the standings, they are only a game out of first place in the NL West going into the All Star break! It's going to be another classic race between the Giants and Dodgers this season, and I'm looking forward to seeing how it winds up. 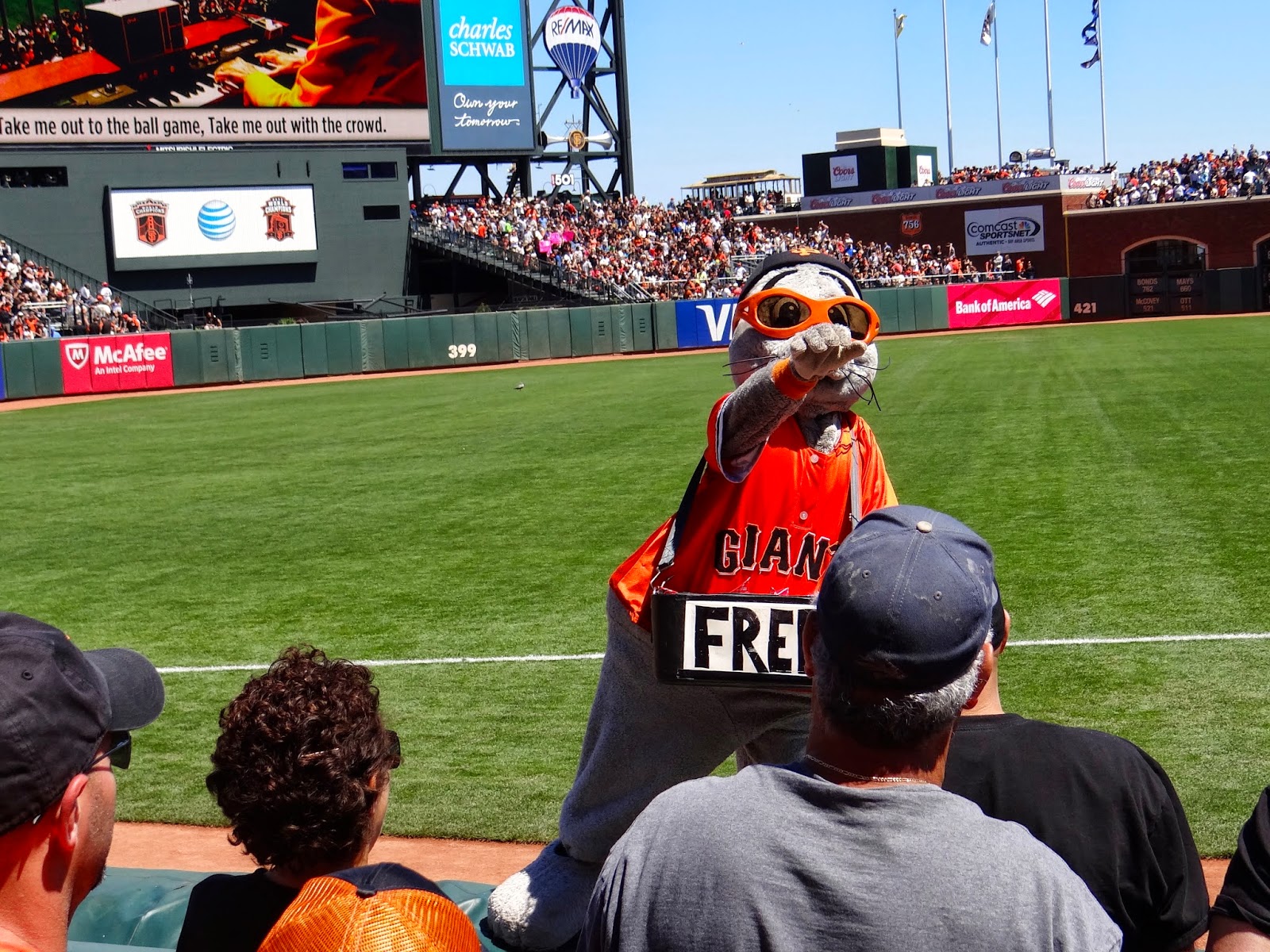 The 7th inning stretch was a lot of fun, as team mascot Lou Seal tossed Cracker Jacks into our section during "Take Me Out to the Ballgame"! 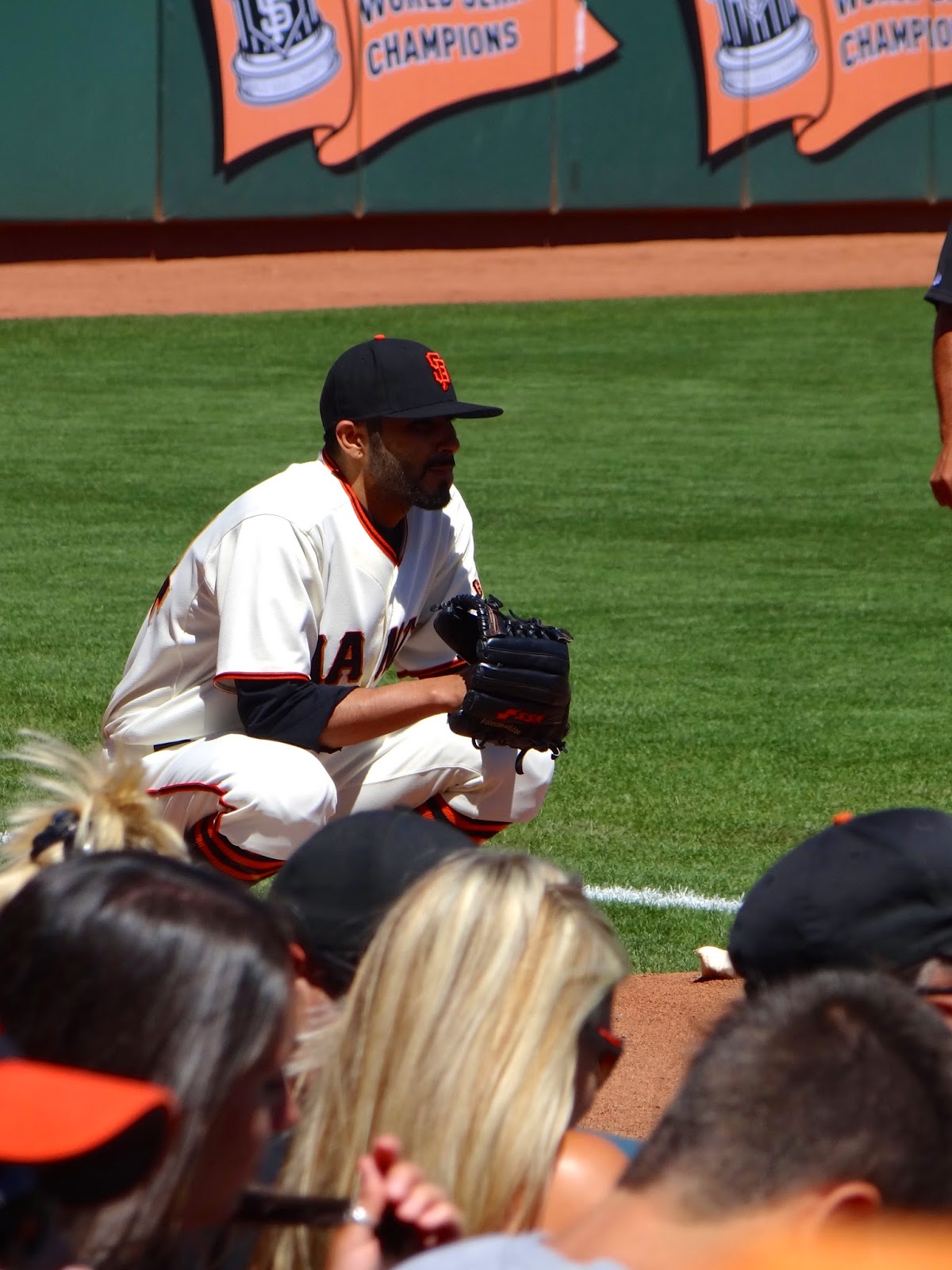 Sergio Romo came in relief later on. He lost his closer's job recently after getting hit around an awful lot. He struck out both batters he faced with men on base and kept the Giants in the game, which could help him win back his job sooner rather than later.

My sister and I walked around the stadium between the 8th and 9th innings, and it further proved that it's the most gorgeous ballpark I've ever been to! 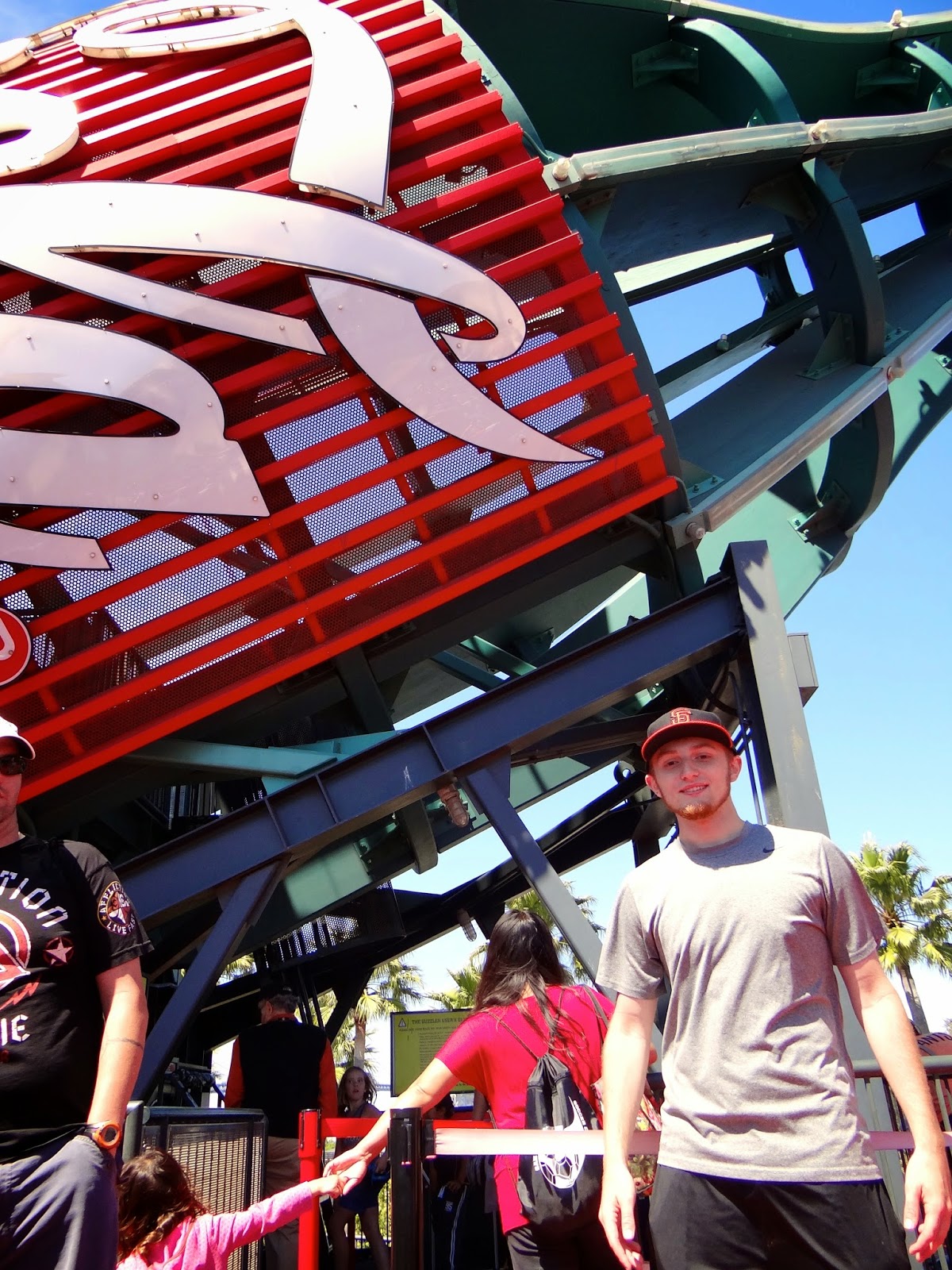 I never realized there were slides inside the Coke bottle in the left field bleachers! The slides are for children aged 14 and under, otherwise I so would've done it. 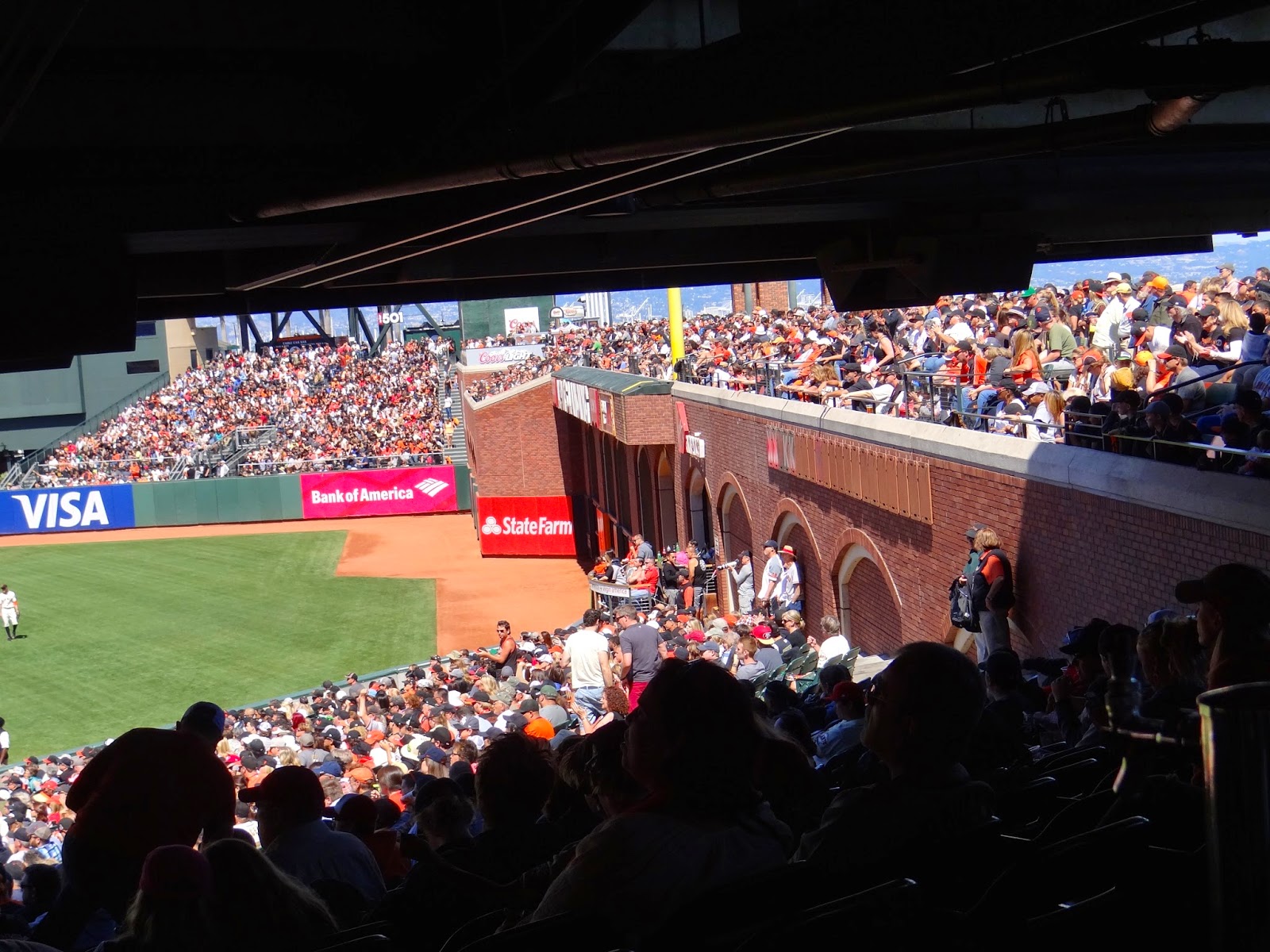 The Giants would go on to drop the game 2-0 as I stated before, but it was a really special experience that I'm extremely fortunate and lucky to say I was able to take part in. If you're a huge baseball fan, which if you're reading this blog I assume you should be; you've gotta check this park out. It does not disappoint.