TTM Return from the Swatter!

Hey guys, Drew back here! A few centuries ago, I mentioned a TTM success that I believed deserved its own respective post. Well, after a long period of waiting, I finally got a chance to deliver said success to you all. Check it out: 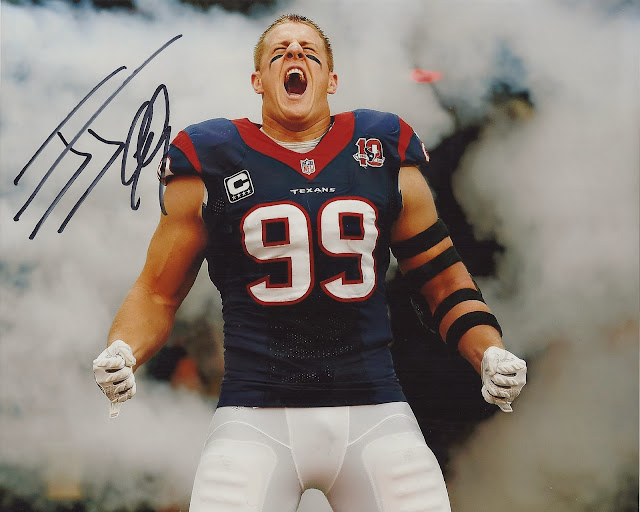 None other than Mr. JJ "Swatt" himself returned an 8x10 to my mailbox back in September! Watt had a breakout 2012 season for the Texans and finds himself now as one of the most recognized defensive players in the sport. He finished the 2012 season with 20.5 sacks to his name to go along with 16 batted passes. Because of this, he walked home with the 2012 Defensive Player of the Year award! Rarely do fans get the experience of watching a defensive lineman swat down passes as consistently as he did last season, and so far he's done much of the same in 2013.

Watt has also been regarded by collectors as one of the better TTM signers in the NFL. He's signed a good majority of fan requests, and he did not disappoint here, as he signed an 8x10 chronicling his awesome entrance into one of Houston's home games. It couldn't have came out much better than this!