The Greatest Steal of All Time!

Hey guys, Drew back here! I hope everyone enjoyed Super Bowl Sunday, because I certainly did! Although it's a long shot that my Jets will get there anytime in the near future, I still look forward to watching the Super Bowl every year, and besides for the blackout, I wasn't disappointed. Anyway, I still have a few more sweet card show acquisitions to show off, this being the first of an additional two baseballs I added! 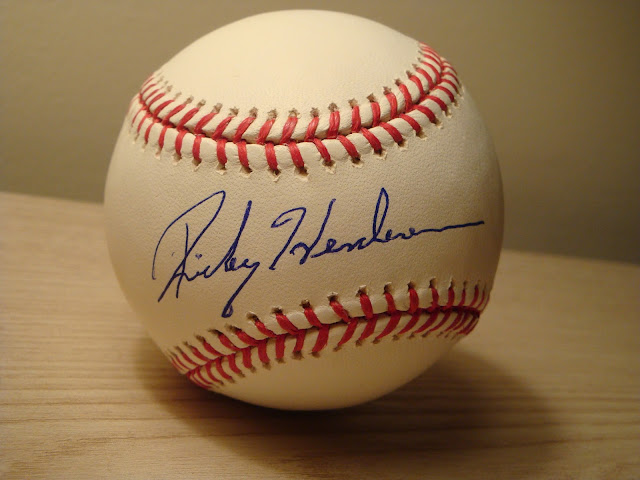 While I may be over exaggerating that this was the "greatest" steal of all time, so was this guy when he claimed to be the greatest ever. Despite his cockiness and large ego, Rickey Henderson has gone down as perhaps the best leadoff hitter, and best base stealer the game has ever seen! And now, after what I consider to be a definite steal, I now own a signed baseball of his in my collection!

I bought this ball off of a guy who works under the JP's Sports Company, who was selling many discounted signed baseball of Hall of Famers such as Jim Bunning, Orlando Cepeda, and a few others. All of his baseballs were $30 and under, and while most weren't certified, you could tell they were legitimate. The only problem was that most of the balls had blemishes, whether it be a noticeable mark or a bit of the signature beginning to bleed. I didn't really have interest in blemished Cepeda balls, so I checked around to see if anything else was around. And there was Rickey. The guy had 4 or 5 Henderson balls, and I asked to see all of them. Each one had a certain distinct issue, but I found one with a mark on the left side of the ball, which is the one I ended up buying for $30! 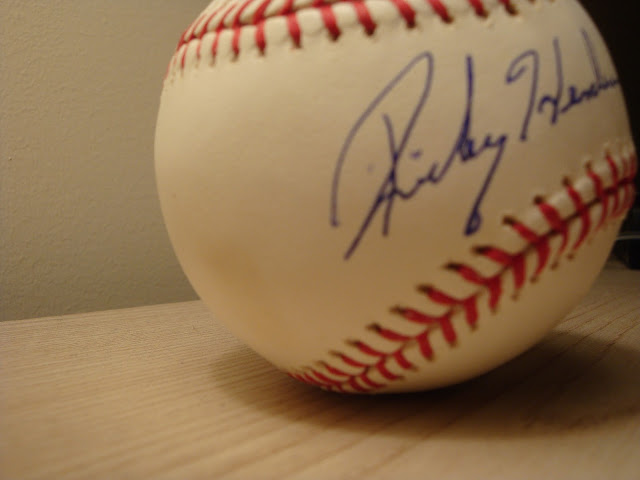 As you can kind of see, there's a dark blemish to the left of the 'R' in Rickey, but clearly, that wasn't enough of a concern for me to pass it up. In a ball cube next to other balls, you can't even see it, so I frankly could care less. 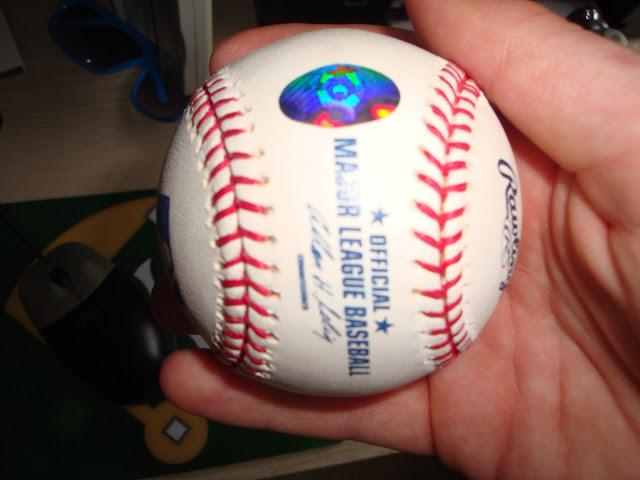 The ball isn't certified, but it does have one of Rickey Henderson's company stickers, which made it evident to me that there's no way it could be fake. The seller said he got it from Henderson's agent, and said if I took it to JSA and it didn't pass he would refund me the money. The hologram on the sticker shows Rickey holding up a base after breaking Lou Brock's stolen base record. I didn't expect in the slightest to come home with a Henderson autograph, so this was a pleasant surprise for me!

I got into talking with the seller after I made the purchase, and learned that he helps get some of the players to come do these shows. Apparently, Henderson is difficult to work with (not surprised), as well as Reggie Jackson, who's now cancelled on them twice. I asked if there's any chance that Yogi Berra will make a final appearance, and it didn't sound very probable. He said the best way to try and meet Yogi is to attend the book signings at his museum that he occasionally goes to, or try and see if Steiner has him signing sometime soon. Yogi is at the top of my list of players to meet, and it really sucks that I may not have the chance to let that wish come true, but I'm glad the guy told me the news so I can't get my hopes up too much.

Before I go, I've heard that some people are having difficulty commenting on the new blog display I set up. All you have to do is update your Java and you should be set! Thanks everyone for reading, and have a great day! See Ya!
Posted by Drew at 12:33 PM