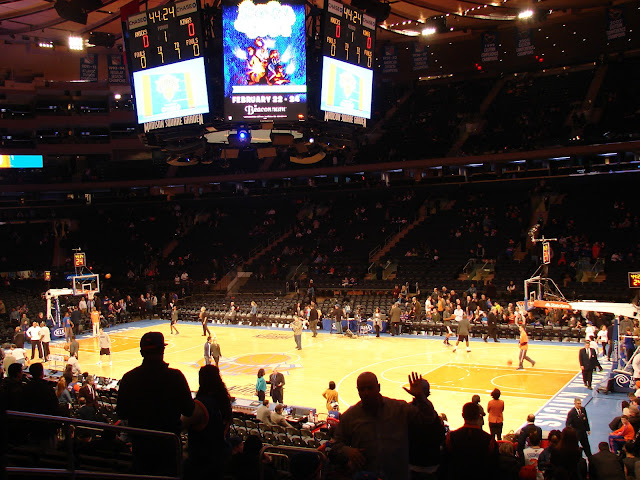 Hey guys, Drew back here! Yesterday, I went to my 1st basketball game since 2008, when I saw the Nets play at the Izod Center against Carmelo Anthony and the Denver Nuggets! The game was a special trip for my CYO team, and I had the opportunity to go on the court and shootaround! The Nets wound up winning by 44 points, and since I was a temporary fan of theirs, I was pumped! Fast forward a few years and a little 'Linsanity', and I decided to instead commit myself to the Knicks! Rather than going to see my dreadful Jets this year, I told my Dad I'd prefer to see the Knicks, since they had a shot to actually be competitive. We bought tickets to see them play the Sacramento Kings, because we didn't want to take the chance of  paying big money to see them get crushed by an elite team.

So last night, Dad & I got to NYC extra early for my first Garden experience. We relaxed at TGI Friday's for a few hours since it was freezing cold outside, but eventually we trekked through the heavy winds across the street to the most famous arena in the world! The only time I ever saw anything at MSG was a few years back, when my family and I saw a Cirque de Soileil show, so I was real pumped to be a part of one of the most intense fanbases in sports.


We took a bit of a gamble with our tickets; not really knowing if we did well or not. Luckily for us, our seats were absolutely perfect, giving us a perfect angle of the court, despite being more on the left side of the court. In the first half, the Knicks played right directly in front of us, which was awesome!

After a chilling National Anthem performed by the Sandy Hook Elementary School choir, the Knicks and Kings were underway. It was an emotional night at the Garden for sure, but it sure didn't look like it in the first few minutes of the game. Second year guard/forward Iman Shumpert missed a dunk, and Tyson Chandler wasn't able to execute on an early alley oop pass from Raymond Felton. But then, Amar'e Stoudemire, the Knicks most controversial player, came in off the bench and threw down a nasty dunk off an assist from Carmelo Anthony that got the ball rolling! They went on to take a 25-22 lead going into the second quarter.
The Knicks rallied all throughout the second quarter, hitting three pointers left and right! Steve Novak made 4 consecutive three pointers, which gave NY a 47-25 lead, which became 56-33 minutes later at the end of the half! JR Smith led the team throughout the 3rd quarter, and went on to the finish the game with 25 points. The team was clicking on all cylinders, and they didn't even need to use their best player Anthony, who only finished with 9 points, snapping his streak of 31 consecutive 20 point games! Tyson Chandler finished with 20 rebounds in less than 3 quarters worth of action, and Stoudemire finished 10 for 10 shooting for 21 points.
The 4th quarter was basically just an exhibition, as NY had an astounding 97 to 52 lead going in! Rookie Chris Copeland was brought in by the fans, who chanted his name until he got the opportunity to play. Old Man Kurt Thomas scored 11 in the 4th, including a 3 pointer that cracked up Carmelo and Amar'e! The Knicks are filled with likeable, tough players, so it's very easy to become a fan of theirs. 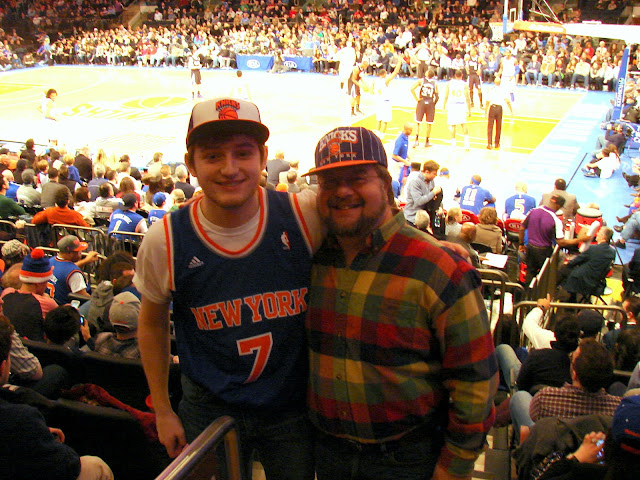 Dad and I wound up having a great day witnessing this 120-81 massacre! The night was filled with laughter and excitement, and it was awesome to be a small part of it! New York is now 30-15 overall on the season, tied for 1st in the East with the Miami Heat! We know if we're going to make the finals, we need to first get past Miami, which will be a difficult obstacle to overcome. But, if the bench performs like it did tonight, I don't see how you could rule that out! The Knicks tape keeps on rolling!

Thanks Dad for the awesome night, it was something I definitely won't forget! See Ya!
Posted by Drew at 3:24 PM