My Topps Round Table Discussion Entry

Hey guys, Drew back here. Today, although I was not invited to do this, I felt like getting in on this and posting myself. Some of us have left our opinions on Topps' "Round Table Discussion" questions. Ok, here goes my little self interview, since I feel like trying this out:

1. How long have you been collecting? What are your favorite players, teams, sets, etc. to collect? Which card in your collection means the most to you and why?

I've been collecting for now close to 7 years on and off. I started as a kid at age 8 or so, and it was big in my school. I had gotten some cards before that, especially Yugi-Oh and Pokemon cards. A lot of my friends in 5th grade or so (I'm in 8th now) traded so I got into it and became the one with the most cards. I sort of slowed down a bit after it wasn't as popular into summer of 2008 when I got into it again, this time buying boxes, blasters, and posting them on YouTube. My parents made me delete the YouTube account, and so I started blogging.

My favorite baseball team is obviously the New York Yankees, and in football, the New York Jets. My favorite players are Derek Jeter, Nick Swisher, Robinson Cano, Mariano Rivera, Prince Fielder, Tim Lincecum, Pujols, Tulowitzki, and Joe Mauer in baseball, and in football, Mark Sanchez, Shonn Greene, Jerricho Cotchery, Dustin Keller, and a few others. I am a set collector, but it isn't my main focus. I'll try to collect some sets on occasion, like 2010 Topps or 2009 Allen & Ginter.

Either the first card I ever had in my collection, a 1995 Denny's Don Mattingly card (now bent in half since it was given in toddler age, haha), or maybe the 2008 Threads Don Mattingly auto I pulled. I like him a lot and he has shown up all over my collection. I've had some good success with boxes/packs in the past, Chipper Jones patch auto /15, David Ortiz triple relic auto, Ryan Zimmerman Sweet Spot bat barrel auto /10, and a few others, but the Mattingly's may be the biggest cards in my collection.

2. In the time that you have been collecting, what is your favorite story, memory, experience, etc?

Well, I had a blast about a year and a half ago opening my 1st box of cards, 2008 Upper Deck A Piece of History. I pulled a Mariano Rivera/Jonathan Papelbon dual jersey and a Pujols jersey. I was pumped and it got me started.

I do also remember sorting out a bunch of old Pro Set football cards that I got in a deck when I was a kid. I loved sorting them out by team, and although all of them were commons, I really enjoyed it.

3. What are the effects on the hobby of major card companies moving toward exclusivity deals with sports leagues? Given that this could be the direction that the industry is headed, what should card companies do to continue to provide a quality product to collectors.

Well, it certainly isn't as great as it was with Upper Deck, to be honest, I liked the huge amount of sets. It gives more to chase, and since I grew up during the beginning of this craze, I'm used to having a lot to choose from. Now, I'm bored out of mind of Finest, Heritage, and Pro Debut and have to wait longer for big products.

One thing that Topps or any of the other companies that are producing cards these days could do to provide a quality product to us to use all On Card Autographs, and not only do that, but since you have the money to do so, get strong checklists for autographs and game used. I've darn near had it with Kevin Millwood jersey swatches and Bill Hall autographs, come on. We are addicted to your product, and we are blowing our money on that garbage? Come on. Put some thought out into the sets more and just ditch any ideas that come to your mind that have to do with the letter X.

4. Pick a timeframe- 5, 10, or 20 years. In that timeframe, what has been the single best and worst development in the hobby?

Well, I'll go with 5 years since I haven't been around that long. The Sweet Spot auto has by far transcended the use of autographs, and while some may be extremely faded, most still look great.

Another big thing is the Refractor technology, fantastic looking cards came out of the past few years of Topps Chrome and Topps Finest.

Lastly, Allen & Ginter's return to the hobby after around 100 years was fantastic and almost everyone loved the players and gimmicks used.

The worst development, easily, are these ugly things...

Sticker autos look very bad most of the time and have just gotten worse. Nobody likes these I think, and they certainly haven't helped the hobby by any means.

5. What are your thoughts on prospecting? Do you do it personally? Why? Has the clamoring to find the next big rookie affected the quality of products, either positively or negatively?

I would like to try prospecting, but it could turn out to be a waste in money, which scares me and forces me to turn away most every time. I'm always too late as well. I wanna pick up one of Heyward's Bowman Draft rookies, but I've been too late too much. It has affected the quality of products because the price always goes up when a big prospect comes about, which makes a product that is affordable at the time of release that may or may not provide excellent quality more expensive. If a set that may be a ripoff already goes up due to one big rookie that most likely you won't get it's not very fair.

6. We are collecting tangible products in an increasingly intangible world. As our lives move more and more online, what will the effects on the industry be? Will the next generation of kids be as excited about collecting cards as we are? How should the major card companies respond?

To be honest though, we have kids interested in two sets right now, flagship and Attax. In some way, they need to be more involved in the rest of the sets. Sure, I'm a kid still, but I don't consider myself a kid while blogging. I'd like to see the prices go down and more fun sets for kids.

7. How has new media changed the way you collect? How should the major card companies utilize new media to connect with their consumer base? How can new media change and/or revitalize the hobby?

Well, Topps did do well with the YouTube rip parties and such, I watch them but they aren't really popular. Topps is all over the social networks and everything, while I'm not, I'm glad they are and the free giveaways involved with Twitter seem really nice. eTopps seems kinda cool and I sort of want to pick up one to see how they look, however, they aren't popular at all with collectors. The redemption process is pretty slow however, and I think that Topps should try harder to get redemptions shipped out. If we have to wait for a card for months and want to trade it, we're forced to hold back. It's not a fun wait.

8. How has the recent rise in counterfeits and scams affected the way you collect? What advice would you give the major card companies to help combat this?

It makes collecting harder to be honest, because you need to make sure the card you're getting is real, which adds another step to the process of buying a card. I've seen some ridiculous scams throughout the hobby, and they never make me happy.

One thing that was very disappointing was the Topps Tribute issue. People didn't know that they were spending hundreds on Ruth seat relics, and it's a ripoff and not fair to us all. Something like this should be on the backs of the cards:

"Congratulations! You have received a relic card of Robinson Cano featuring a swatch he wore on April 11th, 2009 against the Boston Red Sox. Cano had 3 hits in this game and was named the player of the game because of it."

Topps, if you're gonna scam us, do it right at least!

9. The poor economy has affected all of us in recent years. In what ways would you like to see card companies respond to provide interesting, affordable products for collectors?

Like I mentioned earlier, on card autographs all the way! Stickers almost never look good, and they are a waste of time, especially in the redemption process. Better checklists, and less scrubs!

More variety in swatch color if possible would be nice, I'm kinda sick of gray or white swatches. It was a cool concept, but it's gotten stale and could get a little revamp.

Make products cheaper too. There is no reason that 2009 Topps Sterling should be 200 dollars. Most boxes just have jersey swatches, which is 1) a ripoff to people who don't know what they're buying and 2) just plain stupid. Sure the cards look nice but for that price I could buy some MUCH better stuff.

10. We’ve done autographs. We’ve done just about every kind of relic/game used product you can think of. What’s next? Where do we go from here?

More unique parts of uniforms. Cleats, Helmets, Sunglasses, mustaches, and maybe some sunflower seeds. I don't know, be creative with your cards, maybe some shin guards! Do whatever but make it cooler!

11. If you could say one thing-anything- to Topps and know that the CEO will read it, what would you say? 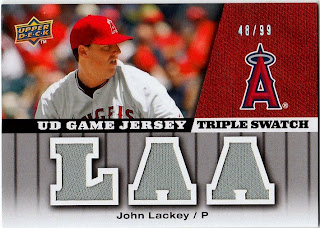 1) When you think of your customers, think about what kids would like. They wouldn't want white or gray swatches in their packs after opening many packs and boxes!

2) We are in a recession and can't afford many of the products you have to offer. High end may be the thing for the rich collectors, but there aren't many of them, so think about the general first. I'm sure everyone would prefer cheaper wax.

3) Faster Customer Service! Have someone work the computer all day! We are purchasing our product and if you make the mistake, it's not our fault and it should be solved!

4) More fun in collecting! If you don't have a collecting goal you could get bored easily doing this.

5) More commercial advertisement, it will open up a new world of collectors!

Well, that certainly was fun! Yet, very long! If you have the time, try this out, help get your feelings out on today's cards! That is why we have blogs, right? See Ya!
Posted by Drew at 7:41 PM

Labels: drewscards, Issues in our Hobby, Topps Round Table