Hey guys, It's Drew, and my dad and I just had a fantastic trip to Cooperstown! The Hall of Fame was so cool, my favorite part was the Plaque Hall. Rickey Henderson & Mr. Jim Rice will be joining that soon. I also liked the Babe Ruth exhibit, the pine tar bat, and some of the current team stuff, especially the Yankees. Everything was great about the Hall, and here is my slideshow of picture highlights I made on Windows Photo Story 3:

I got a TON of cards on the trip too, recap:

In town I went to many stores including Pioneer Sports Cards, Yaztremski Sports Cards, the store right next door to it, Mickey's Place (didn't buy anything there) the On Deck Circle (i think that is the name of it), and got some retail stuff at the HOF store.

2008 Topps Allen & Ginter- 2 Retail Packs: Needed- Hank Blalock (# 322), everything else for trade. Also got a Griffey State card Not For Trade, and the two minis are of Evan Longoria (RC) & Mariano Rivera (Yankee PC)

2008 Topps Stadium Club- 1 Hobby Pack: THIS IS WHERE THE SWEETNESS IS AT!!! This is my pack opening words said at the time:

"Jed Lowrie RC for the Red Sox. Nice, and it is numbered out of 999, nice. Alright, a rookie of Johnny Cueto... not numbered. Looks like we might have 2 hits in this! Jose Reyes base, and the auto is of Tom Gorzelanny. It's another one of those Beam Team Autographs, and it's another one that is not numbered, but, I think we got another hit too! We might have a case hit! Yeah, we do! It's sick, SICKNESS, Look at that! David Ortiz... Autograph, David Ortiz Autograph, triple jersey autograph of David Ortiz! A beautiful card, it is numbered out of 99, UNBELIEVEABLE! Triple Jersey, Autograph of David Ortiz! Woo-Hoo! Definitely paid up for it, probably times 100 of the price! That is sickness! See Ya!"

Well, you can tell I was happy when I saw that, but then again, my Red Sox luck came back again! Please next time when I get something nice it is for the Yankees! But, can't complain with that!

Some other things I got were: the 2009 Yankees Team Set, a complete set of 1999 Fleer Tradition with 150 cards, mostly rookies, and I was able to find 3 Yankee needed rookies in that set! I also got some singles, including a Frank Crosetti Game Used Jersey Card from 2002 UD SP Legendary Cuts for the Yankees PC (not #ed), a needed Cody Ransom RC, a Mark Teixeira RC, a Brett Gardner RC, an Xavier Nady rookie card, a CC Sabathia RC, and another Brian Bruney rookie card (#ed 14/100). My dad also gave me a Frank Robinson Autograph from one of my local stores, and a graded Topps Ken Griffey Jr. RC (graded 10 by USA Collectibles). At Yaz Collectibles, I bought a Roy White auto on a 1968 Topps card, and at the place next door I got a Nick Swisher autograph from 08 Goudey (not #ed). Also at that place they had the card machines where you enter like a quarter of two and got a couple cards. I did the Yankees Card thing twice, getting 6 Don Mattingly cards, a Rickey Henderson from 89 Topps, and a Catfish Hunter 1988 Topps All Star Game card. I entered the other mixed one twice too, and got a Phillies team card from 06 Topps Heritage, a Tino Martinez 94 Donruss, Larry Walker 94 Donruss, John Olerud 94 Donruss, 2 Fred Lynns from 82 Topps, and a Benji Gil RC from 1994 Donruss too. At one of the places if you purchase something for more than $4 you can spin this wheel thing. I didn't have much $ left, but I bought that pack of 08 Topps Chrome for $4 (ended up pulling the Blue Jays RC Auto), and got to spin the wheel. I got the common prize, a little mystery pack, which had a mix of basketball and football: Mike Sanders (BB), Harvey Grant (BB), Rich Camarillo (FB), Andre Rison (FB), Don Mosebar (FB), Sam Perkins (BB), Henry Ellard (FB), a little Super Bowl trivia thing, Mark Kelso (FB), and a nice looking Rod Woodson (FB). The last things I got were a 2005 UD Legendary Cuts Base Set (1-90) for $2.50, with a bunch of HOF'ers, and 3 mixed sets. Two were Yankees mixed sets, based on 80's and 90's players, with rookies of Ricky Ledee & Mike Lowell, and some guys like Willie Randolph, Don Baylor, Tommy John, Don Mattingly, Darryl Strawberry, and more. In the mixed I got some nice looking stuff too, but I won't name all of it. I made a slideshow of the cards I got over the great trip, and here it is... 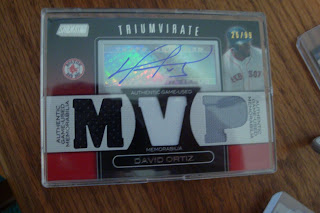 Thanks Dad if you're reading, and everyone else reading this, and see ya!
Posted by Drew at 11:37 AM