We Won't Stop! Mail from William

Hey guys, Drew back here! There was a bit of confusion recently between Frankie, William, and I which resulted in me receiving both William and Frankie's cards in the same box! I accidentally posted the mini Mariano Rivera figure with Frankie's cards, but that actually was from William. Anyway, everything is now worked out, so let's see what William had to offer! 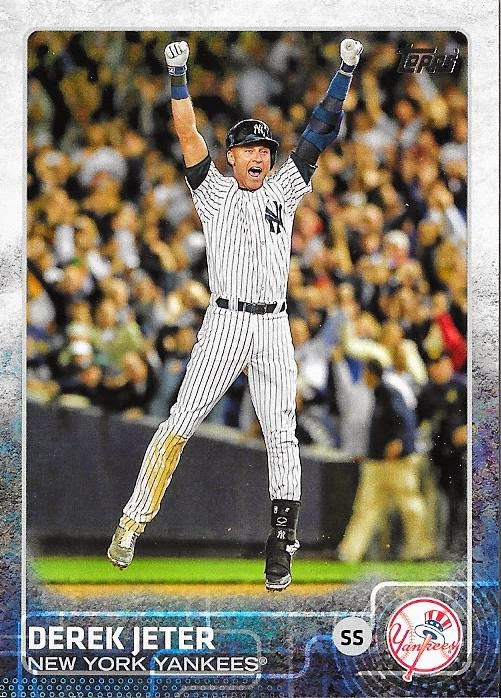 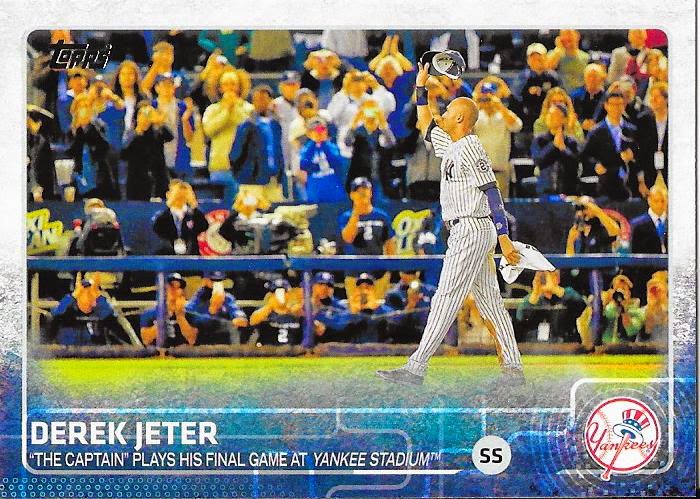 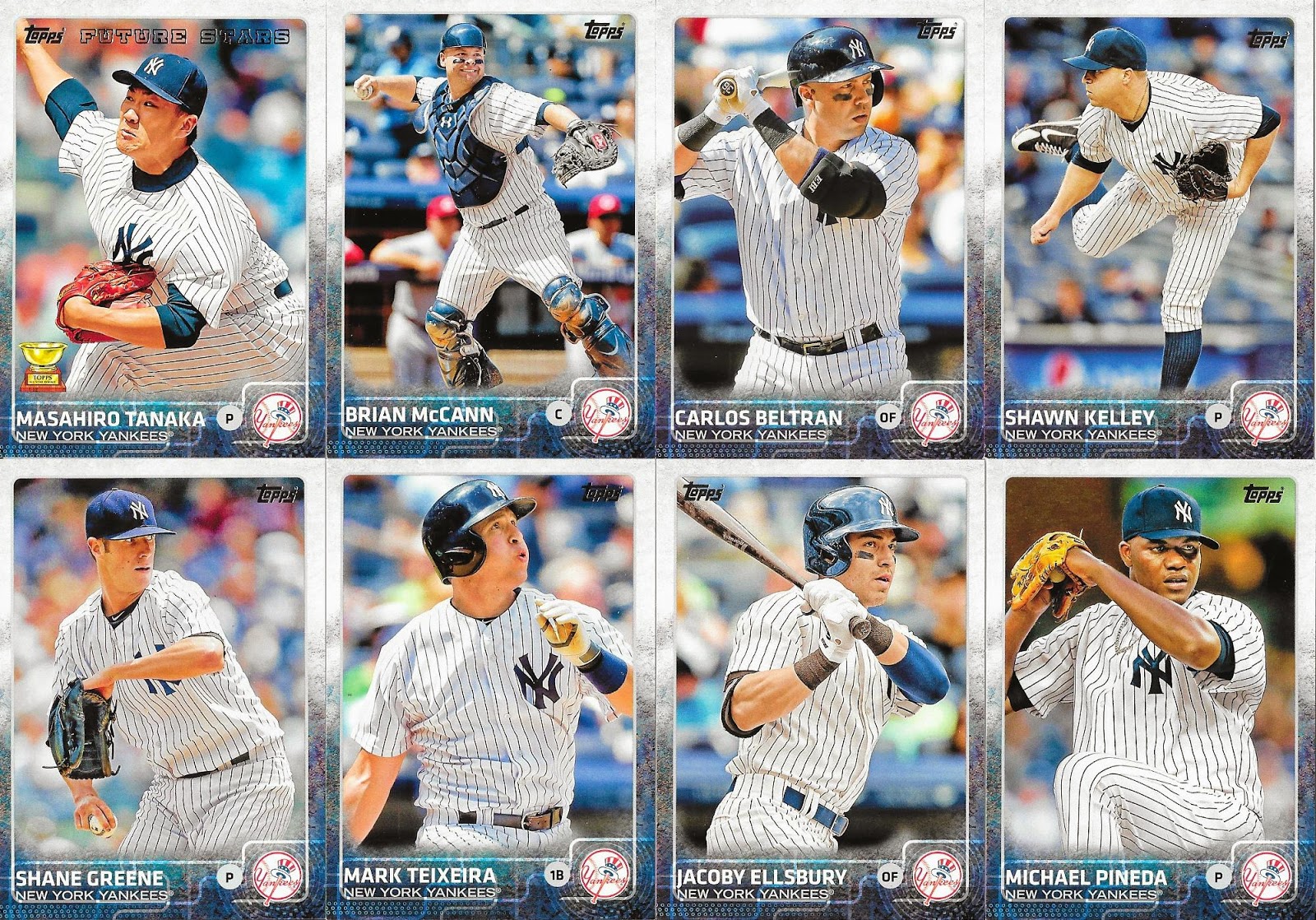 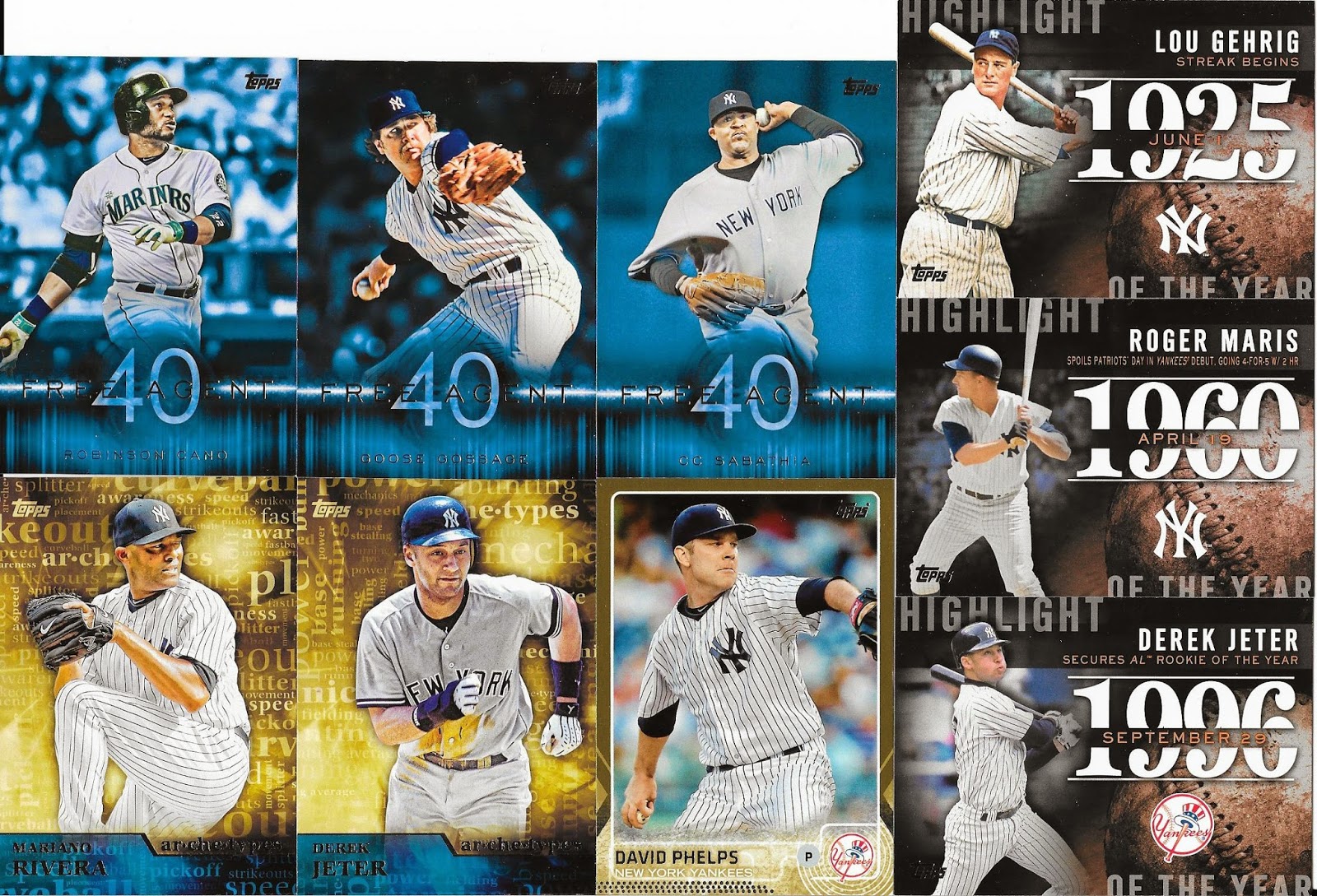 We begin with a whole lot of 2015 Topps Yankees goodness! I did wind up buying 2015 Topps cards at Target surprisingly, but I only pulled a few of the Yankees cards. Luckily for me, William opens quite a bit more than me, and is one of the most generous people in Internet history. I kicked off with the two amazing Jeter cards, both of which have become two of my all time favorite cards. The second it was revealed that Jeter's classic celebration would be the first card in the set I knew this was going to be a special year for baseball cards. I really like the gold parallel of David Phelps too; I'm going to miss him next year when the rotation is on the DL. 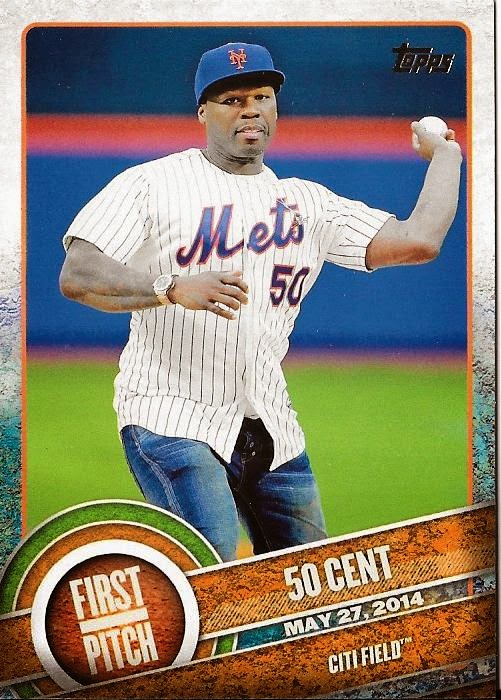 I'm going to hope and pray if Sabathia and Tanaka get injured next season that they don't look sign this lefty bullpen specialist. Curtis James Jackson III, aka 50 Cent, threw perhaps the worst pitch of all time to kick off a Mets game last season. Seriously. (Vlad could still hit it though) 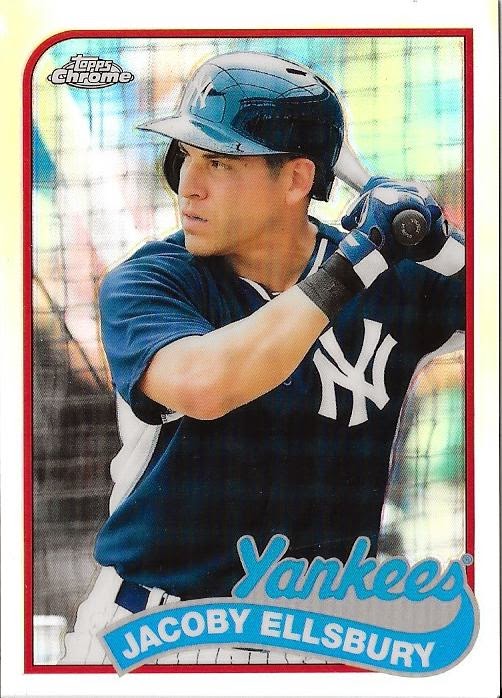 Well, it really doesn't get much nicer than this 2014 Topps Chrome insert of Jacoby Ellsbury! I've always kind of liked the 1989 Topps design, and I think they did a great job with it in this case. I don't have much of Ellsbury in my collection, and I have a good feeling about him in 2015. So I think I've got to do something about that. 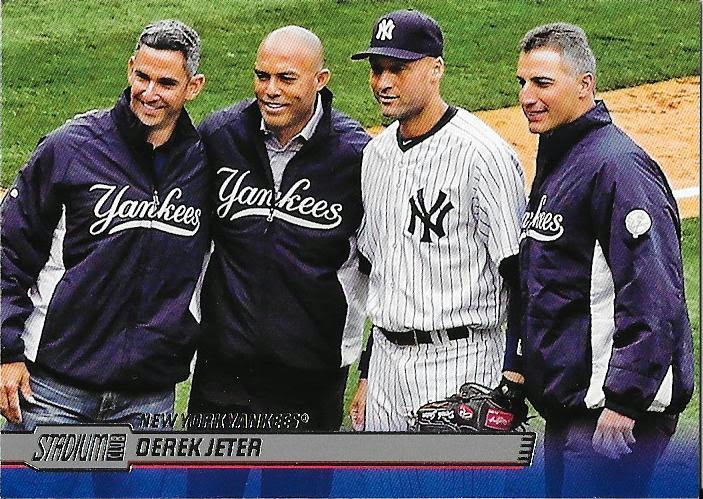 I mentioned earlier how the new Derek Jeter 2015 cards are among my favorites of all time. This one has got to be up there now too. From everything I've seen, 2014 Stadium Club looks amazing, although it's not much of a surprise. I may have to try and get some for myself, but I could just be content with this sweet Core Four tribute. It's so weird thinking that this era of Yankee excellence has come to a close. 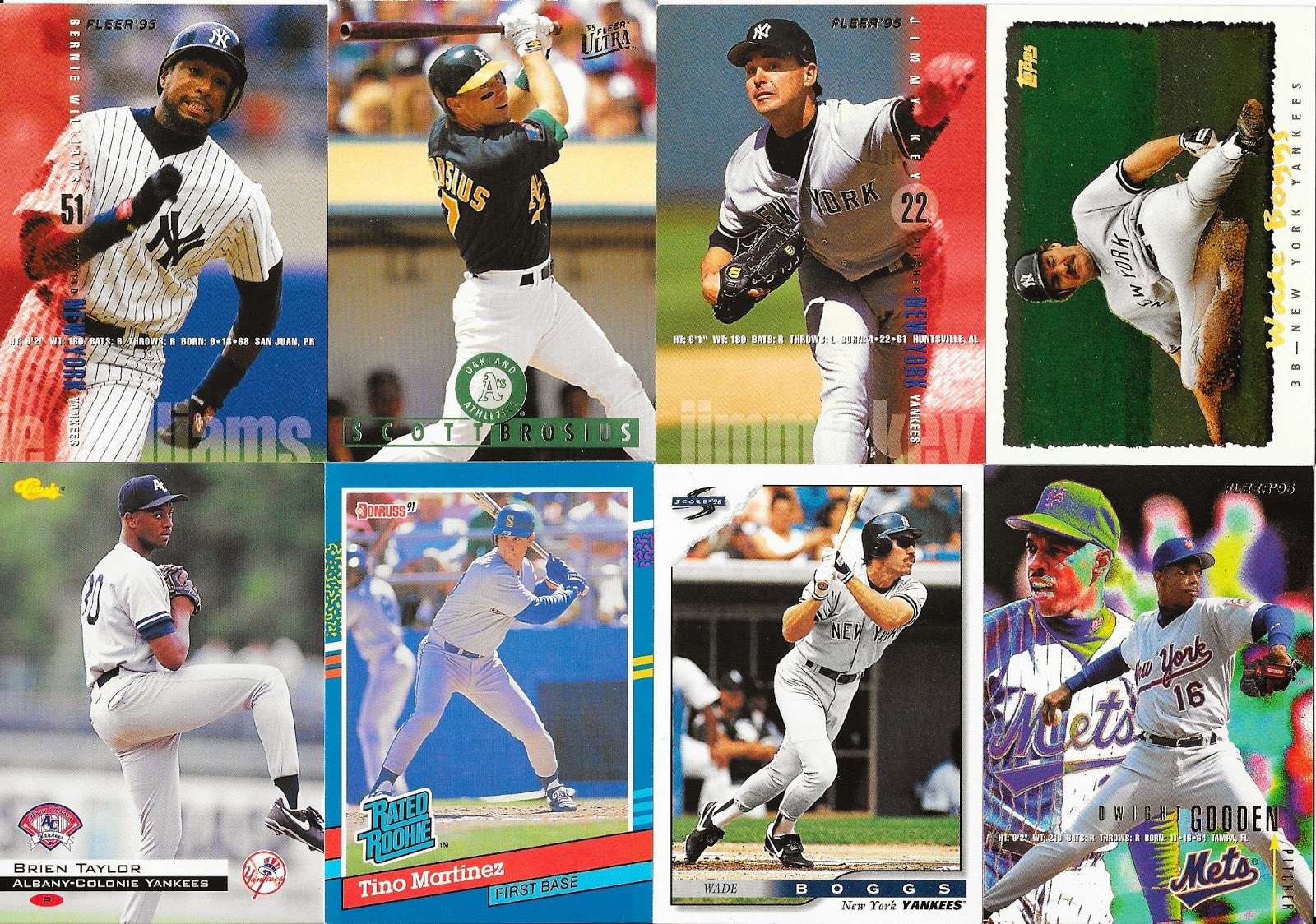 He also tossed in some older cards of a couple of my personal favorites. I love that Tino Martinez Donruss rookie; even if I may have it already I'll never get enough of it. 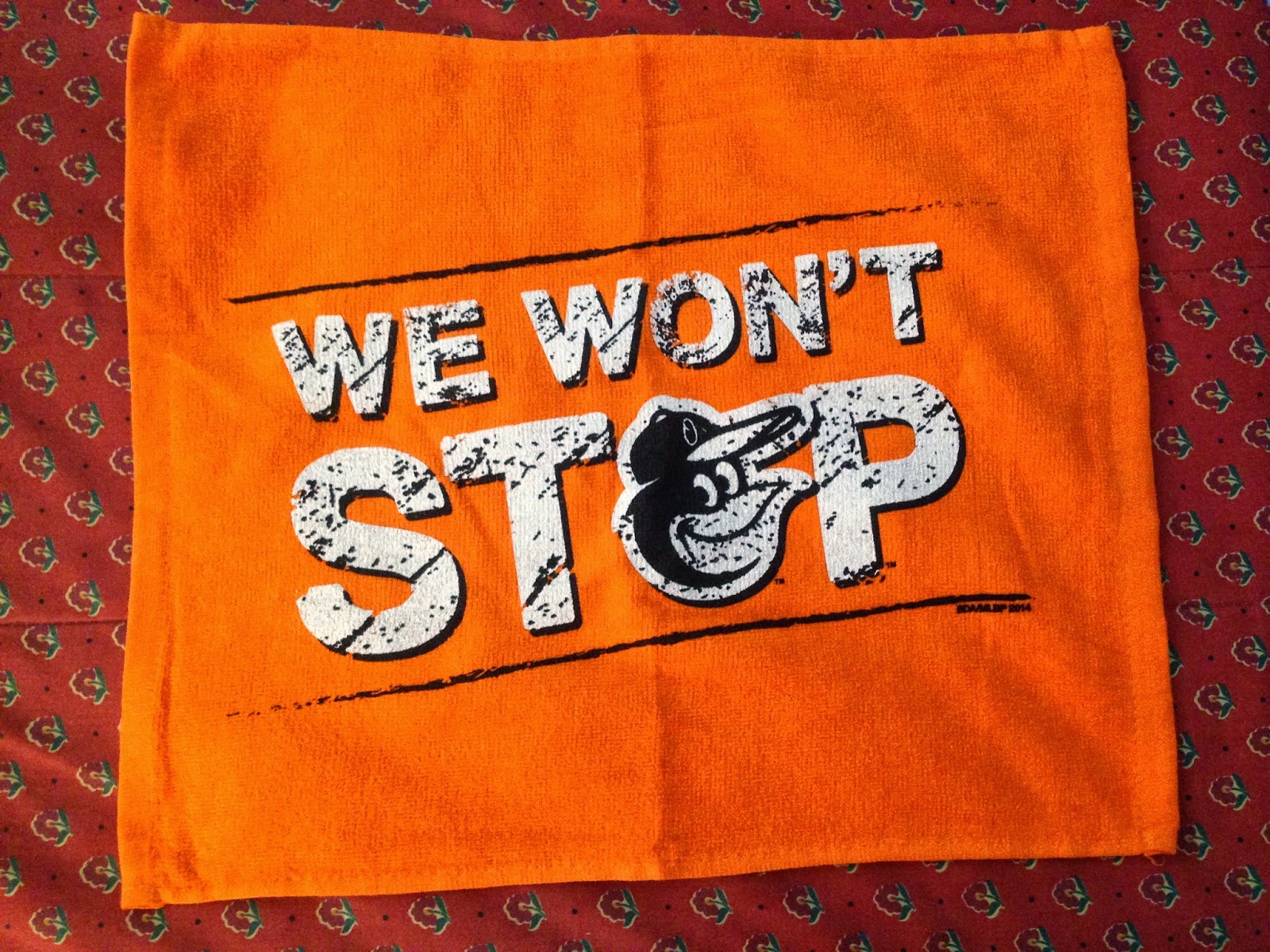 Capping it all off was this rally towel from the Orioles playoff run last year. He seemed to have gotten about a million of these from FanFest this year, and it is a welcomed addition to my collection. If it was a Red Sox logo, I could use this in all sorts of different ways, but I can tolerate his Orioles enough to leave this unharmed.

I'll never be able to fully repay you for all of this stuff, William. It means a lot to you that you think to send me all sorts of nice things on occasion; it's living proof that you're one of the best people I've ever come across (although you certainly don't need to send anything to prove that). Thank you so much!