His Life in the Sports Card Hobby Joins Mine!

Hey guys, Drew back here! Other than the ridiculous weather, things have been starting to fall back into place lately. It's been refreshing going to school every weekday morning and coming home to relax to myself (and not having to put up with dorm mates). It's given me a chance to get more involved in this hobby and organize a lot of the mess I have scattered throughout the house.

Recently, I had the chance to meet Frankie of My Life in the Sports Card Hobby at the Pinstripe Pandemonium in January. I've helped Frankie with some advice as he's been getting started in the blogging community, and he decided to send me a care package out of the blue! It was so thoughtful of him, especially given all the amazing stuff he sent along! 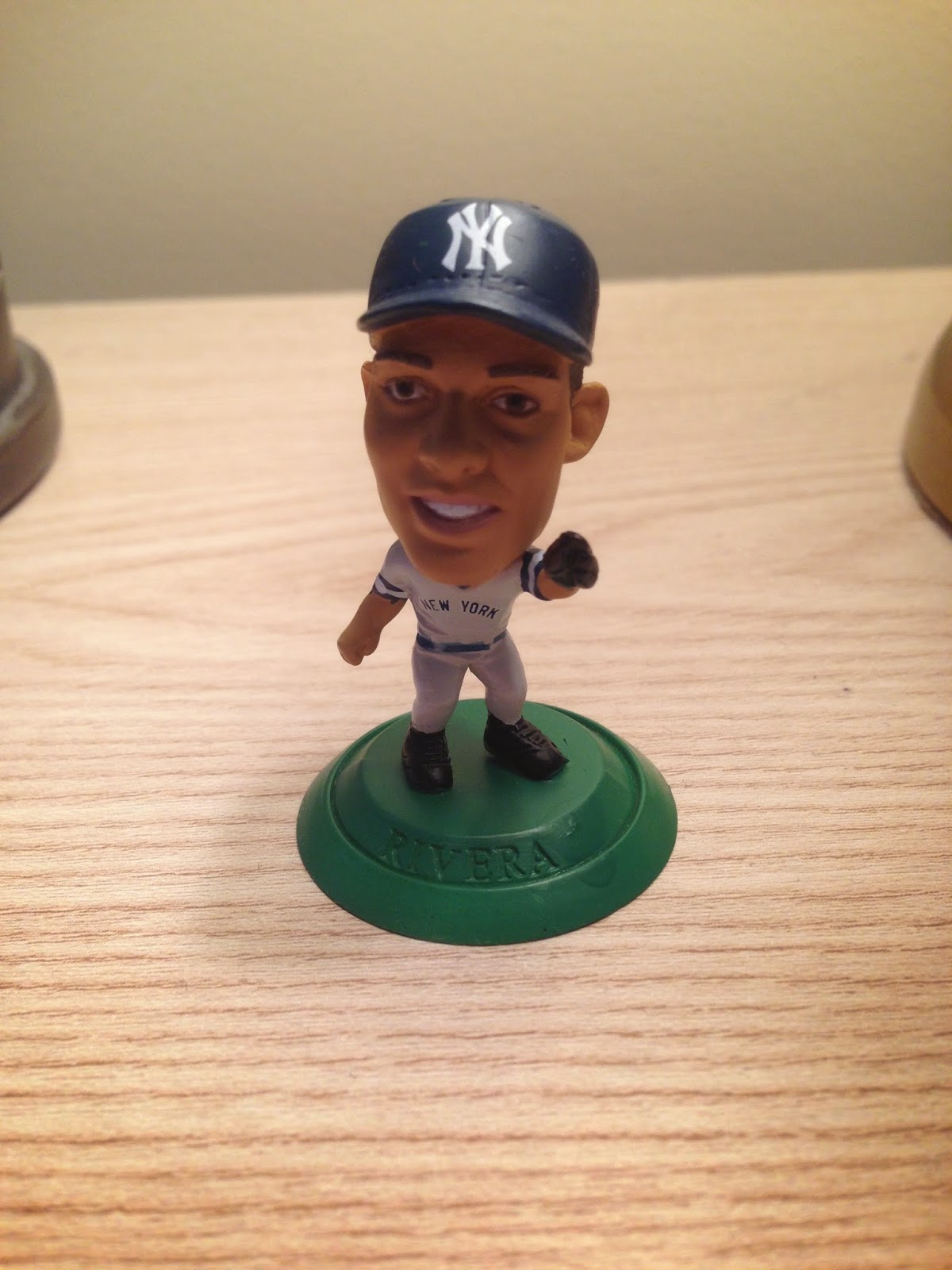 He kicked it off by sending me this little Mariano Rivera mini figure. I'm not sure what this is from or for, but fortunately hoarders like me will take just about anything with an interlocking NY and especially of guys like him. 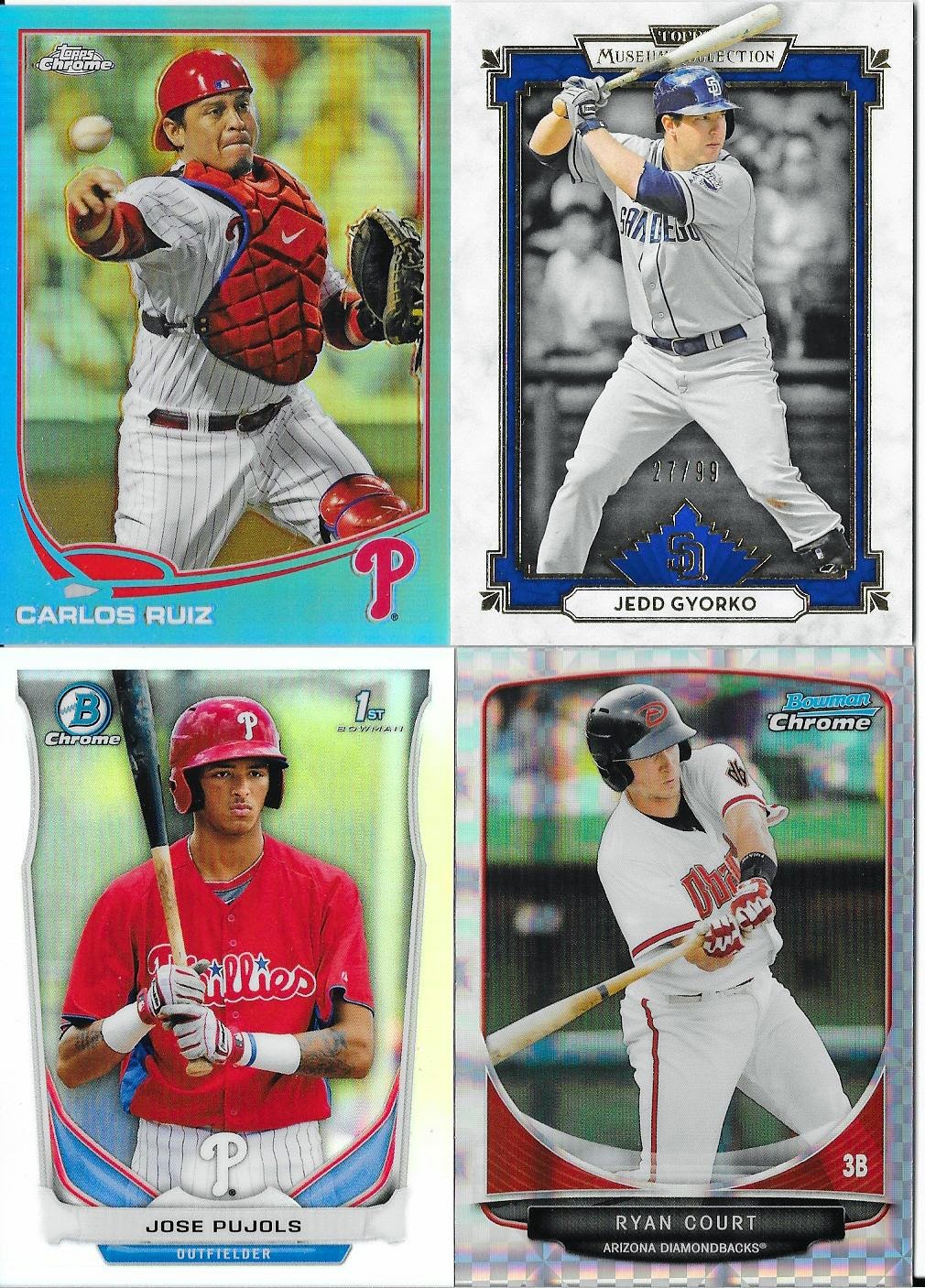 Frankie tossed in some interesting inserts and rookie cards in the package, my favorite of these four being the Jedd Gyorko Museum Collection parallel numbered to 99. I'm curious to see how the Padres will fare this season with their completely revamped roster, and Gyorko will be a key player in that transition from pretenders to contenders.

I think Eric Jagielo is going to be a pretty good player when he is able to put it all together. I've heard a lot of positive things about the 2013 Yankees draft class; consisting of top prospects Jagielo, Ian Clarkin, and Aaron Judge. They've never been known for having a standout farm system but I think Cashman and co. are heading in the right direction. 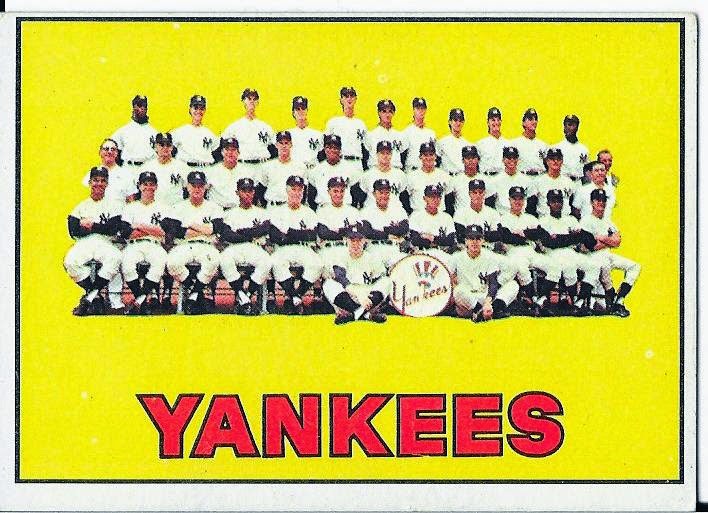 I really didn't expect to find this 1967 Yankees team card in the package, and it was easily one of my favorites Frankie included. That bright yellow sure is hideous, but it really represents the team well during the "Horace Clarke Era". In 1967, the Yankees finished 20 games behind the Red Sox in the division. Regardless, it's a classic card and it was super cool of Frankie to send this to me! 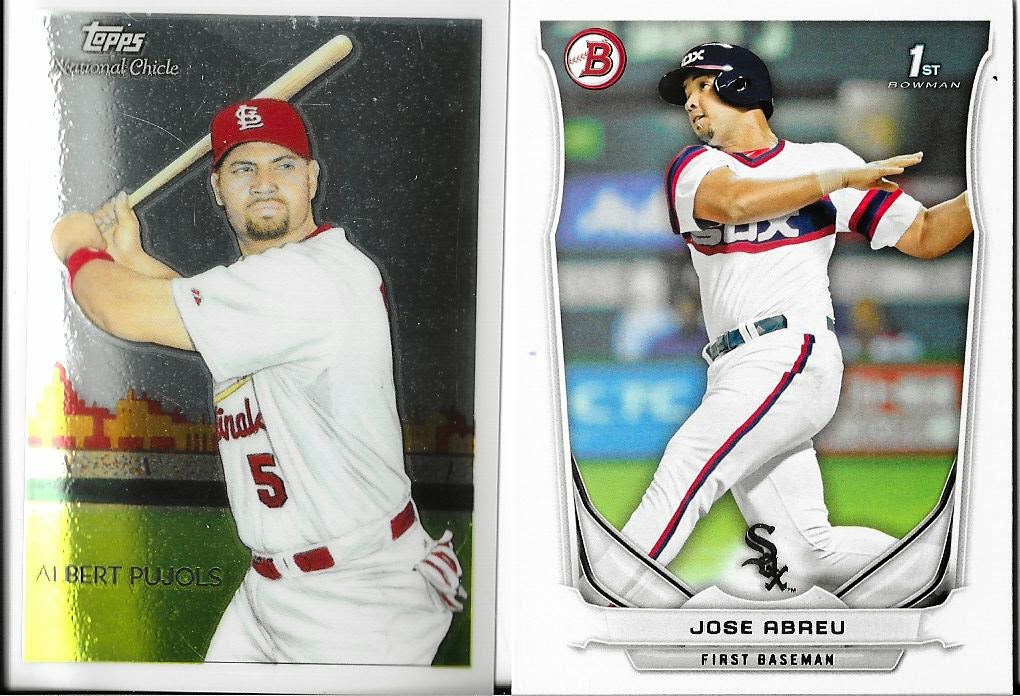 This is kind of a cool then and now scan here with Albert Pujols and Jose Abreu. Pujols is still a respectable, productive player, but it seems like the Cuban star is ready to take his throne. I'm keeping Abreu on my fantasy team this year, and am excited to see if he can defeat the sophomore slump. (If anyone has Abreu's to spare, I'd be happy to work something out!) 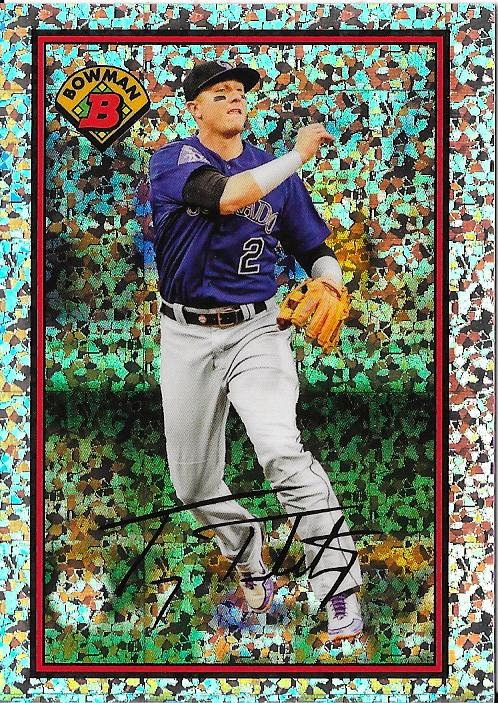 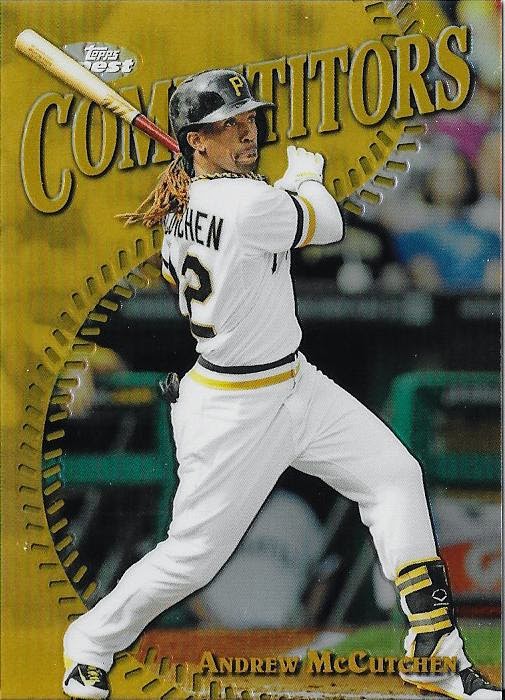 These were probably my 2 favorite cards from the bunch of two of my favorite players in the game today. I've been debating whether to make Tulowitzki a mini PC on my Who I Collect / Wantlist page, and I think one of these days I'm going to do it. This Bowman insert looks incredible in person. As for the Topps Finest insert of Pirates superstar Andrew McCutchen, well, what can I say? It's a beautiful card numbered only 19 of 25! Frankie, you really didn't have to do all this! 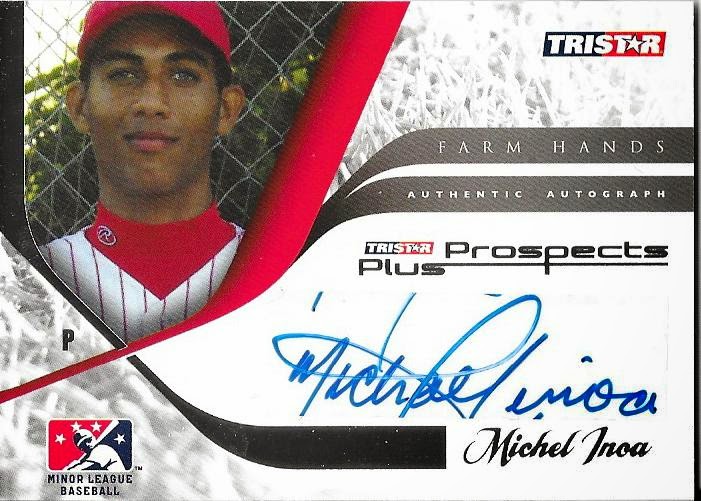 To cap it all off, he sent me 3 "hits", the first being a TriStar autograph of Michael Ynoa. I used to have a Ynoa autograph, but traded it and thought I was going to regret it. His future has not been determined just yet, but he was recently included in the Jeff Samardzija trade, so it's possible that the White Sox may see something in him. 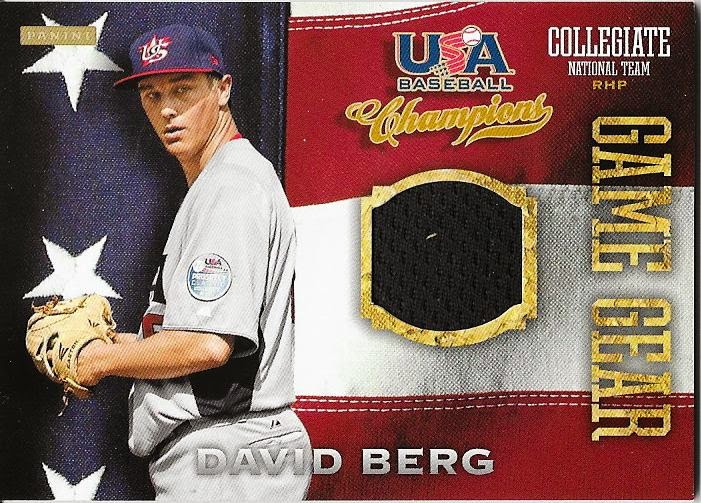 David Berg was selected by the Rangers in the 17th round of the 2014 MLB Draft, but instead chose to pitch for the UCLA Bruins in college. He is a sidearm pitcher and a dominant bullpen arm in the 2013 College World Series! These USA jerseys are so patriotic and appealing looking, and if he turns out to be the stud he's pitching like it'll be a nice card to own. 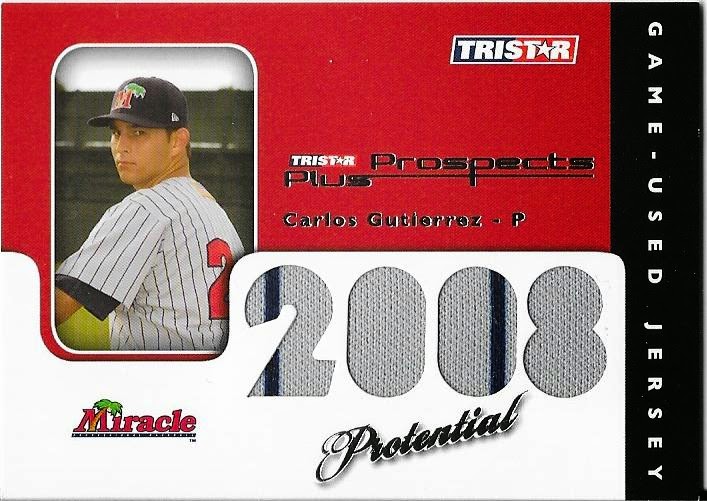 Carlos Gutierrez has bounced around the minor leagues since he was drafted by the Twins. He now is in the Cubs farm system around AAA, and could be a call up possibility if injuries strike the big league club. I love pinstripe relics too, and although I don't know much about this kid, I really appreciate you sending me all of this Frankie!

I had a lot of fun uncovering your package and getting a wide variety of different things. I need some diversity in my collection once in a while anyway! Frankie, you really didn't have to do all this, it was so considerate of you to think of sending all this stuff along my way! I'll have to be sure to get you back in the future for this big haul, buddy, so watch out for that.