Hey guys, Drew back here. Like I said last post, it's about that time where my mom starts to become worried I'm going to one day blow all my money on 2.5 by 3.5 pieces of cardboard. Of course, I'm not going to let myself do that, and I feel like I've been a very smart buyer in the past year. While I'll admit to wanting just about everything minus Red Sox stuff, I can easily say that I wait for the best deal I can find before I pull the trigger. Recently I knocked off two autographs that I've been wanting, and they aren't Yankees or HOF'ers, but they're of two players who helped build the love I have for baseball today. And they both happen to be out of the new 2012 Topps Tier One product! Take a look: 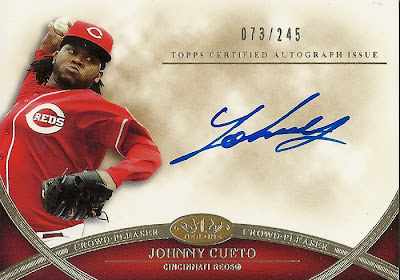 First off, we've got a Johnny Cueto autograph numbered out of 245! Cueto, for a while, was just kind of there in the Majors, but in the past two or three seasons, people are starting to see what the scouts saw in him back then. With one of the lower ERA's in all of baseball this season, Johnny is starting to make a name for himself. I've always liked him, especially because his windup reminded me of former Yankee/Red Sox great Luis Tiant. I had a feeling he'd creep up the Reds rotation, and I'm glad he finally made his splash. 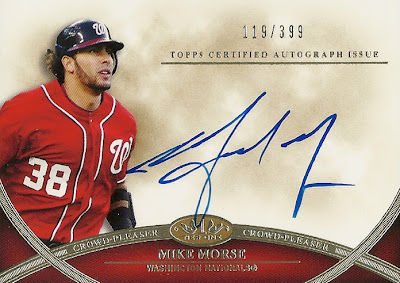 Saying Mike Morse has made a big impact on my baseball love is definitely a push, but nonetheless, he certainly was fun to watch last season, as he broke out from just about nowhere to become a fantasy baseball staple. There is just something incredible about seeing a guy's career portray a movie script, about the whole making it out of nowhere thing. Morse definitely did that, and with a now competitive Nationals team, he could make even more out of his career with a possibility of getting deep into the postseason!

Before I wrap this up, I just want to give you all a bit more of a sense of understanding of my taste of this hobby. As most of you know, I am one of the young guns in this "blogosphere", and I'm currently living out those memories that a lot of you guys have shared with me in the past. I follow all of baseball, including playing fantasy baseball, and even though I'm a Yankees fan, I'd consider myself a fan of the game in general even before that love for pinstripes. So, when I open a pack of cards and pull some assorted stars, I'm happy. Because they're my Doc Gooden's; Don Mattingly's; Dale Murphy's; Rickey Henderson's, etc. I know a lot of you go out on a limb buying star autographs and what not but I felt like I just needed to explain why I do so.