Hey everyone, Drew back here. I think it's really time I should get moving on posting some of these, considering they've sat around my desk for probably 2 or 3 months. I picked up 2 Allen & Ginter autographs from various years on eBay fairly recently, and I'd love to put them in my card box already so, check them out! 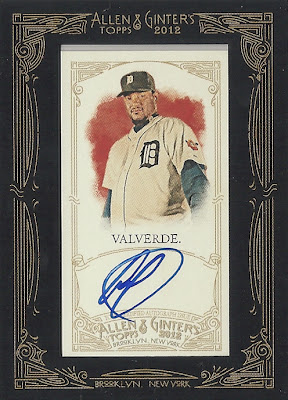 First off, from the new 2012 Ginter product, is this Jose Valverde autograph. I'm not necessarily a big fan of his, but it was cheap, so I got it anyway. For about $3 shipped, I picked up an autograph of last year's saves leader, even though this year has been quite rocky. Nonetheless, he'll have plenty of opportunities to do well in the next few years with Detroit, so for 300 pennies, I'll take it. 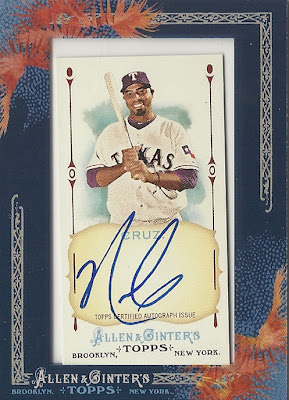 The other one I picked up was this 2011 A&G Nelson Cruz autograph! I drafted Cruz as my third outfielder in fantasy baseball this year, behind Hunter Pence and Alex Gordon, so I picked this up to give me more of a reason to root for him. Unfortunately, I've since cut him, as he's been very inconsistent, even though he's actually been fairly healthy this year. (By the way, it sounded like my outfield sucked, well, it didn't because I drafted Melky Cabrera as well, but certainly things have changed since...) But who could forget Cruz's power display in last year's postseason, crushing 8 home runs between 2 rounds, including 6 in the ALCS! This guy certainly has a flare for the dramatic, and although he isn't connecting on all cylinders right now, watch out come October.