Hey guys, Drew back here! Today was another productive day for my family, as we got to go out to New Jersey and explore the Hoboken area a little bit. I'll get into that tomorrow, as I still have one more part of my trip up to Cortland University to share with you all, which will probably be more entertaining to read for you non Jets fans!

If you read my post yesterday, you may remember me mentioning a promotion for the first 50 kids in attendance. Well, Dad and I figured since I'm not technically an adult yet, that I could count as a kid. Little did we know, the guy in charge of handing out wristbands to the kids told us it was for children 14 and younger. We walked away, disappointed, but my Dad didn't want to give up. He went back, and practically begged the guy, and eventually, I ended up with a wristband! This wristband allowed me to go onto the practice field after practice ended to obtain autographs from any players who felt like signing for a bunch of kids (and one abnormally tall "8th grader")! I knew some players would go to the sidelines where I should've been, but the chances of getting multiple autographs in that position were slim. So, at around 11:00, when practice was coming to a close, I headed over with all the little kids who were about 4'0 tall to the end of the field! I didn't expect too much, but things changed very quickly 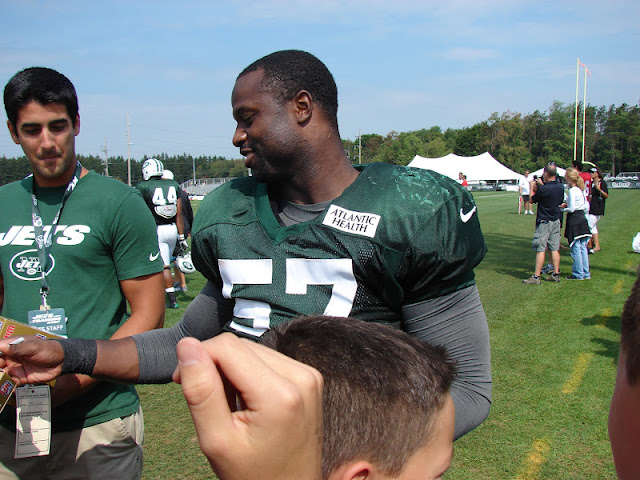 The first player to grab a sharpie and sign for the 50 of us was linebacker Bart Scott! Scott has had a great career spanning 10 seasons with the Ravens and Jets. I mean, who will ever forget "CAN'T WAIT!" I did get an autograph from Bart, which was relatively large on my football. I began wondering if everyone signed as big as he did, if I'd have enough room on the ball! Bart was an awesome guy, and it was great to meet one of the more colorful players in the NFL! 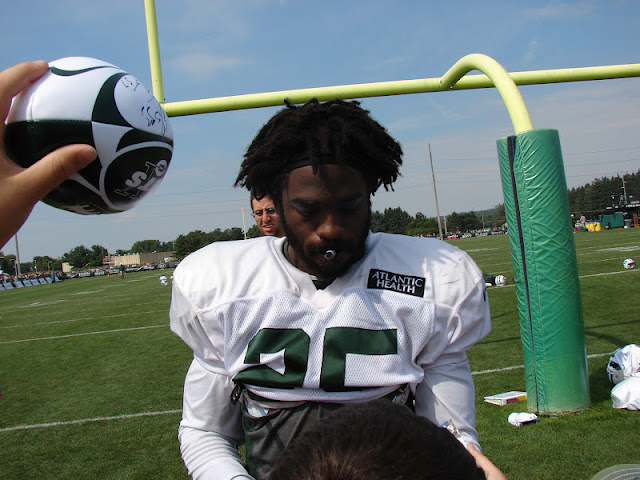 Running back/Kick Returner Joe McKnight was the next player to sign for us, and he was also really cool! I managed to talk to him; asking if he was planning a trip to Honolulu this season. He told me he'd try, and I thanked him for all he's done as well as adding the second autograph to my ball. He also gave his practice gloves to 2 younger kids after he asked them if they knew what his longest kickoff return was. Nick Folk told the kids to say 107 yards, and McKnight gladly handed them the gloves! 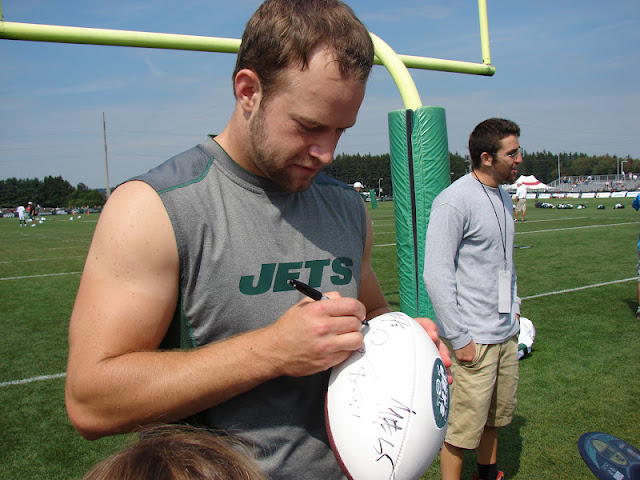 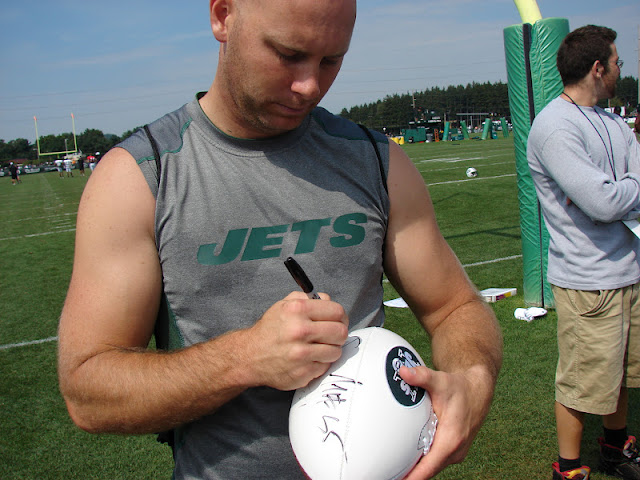 Special teams men Nick Folk (not pictured), TJ Conley, and Josh Brown were the next players to add their signatures to the ball! All three were nice guys, and well, that's all I really have to say about our kickers and punters. I'm curious to see whether Folk or Brown will be our starting kicker this year though. 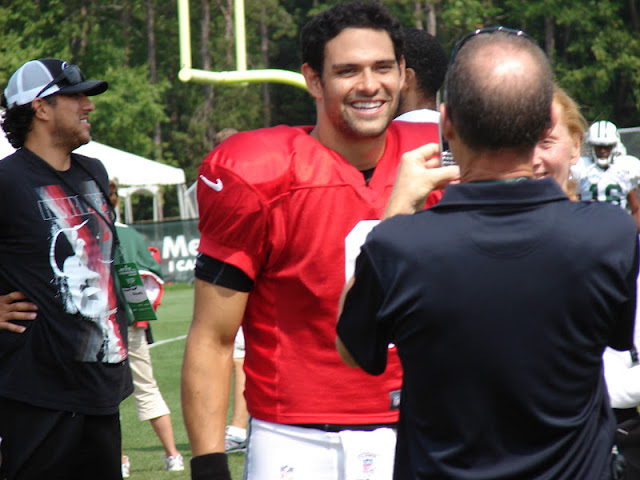 While they were signing, I caught Mark Sanchez over near us taking pictures with some of the VIP members. They didn't seem to get a whole lot of extra benefits, well, until that happened. Immediately thinking I couldn't leave without the starting quarterback's autograph, I told all the kids we should start a Sanchez chant! Sure enough, it got loud enough to the point I didn't even have to say a word. You have to love the enthusiasm in little boys. We got a wave out of him, and we had our fingers crossed that he'd come over when he was finished. 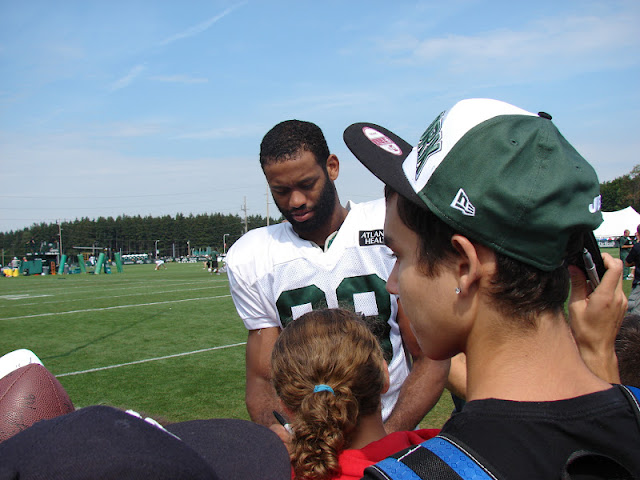 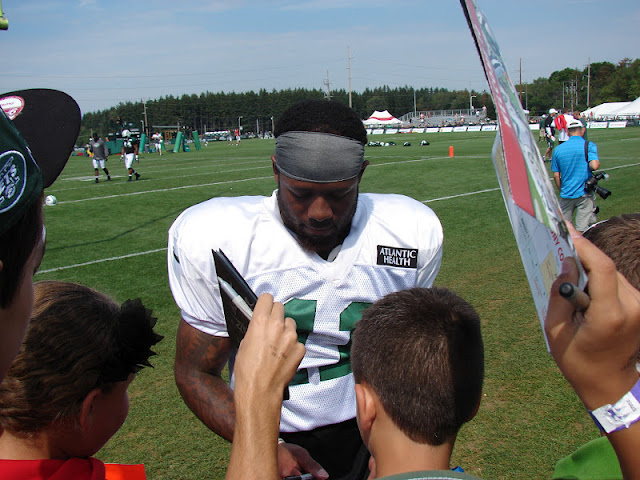 In the meantime, receivers Patrick Turner and Jeremy Kerley came over to sign a little bit. I got Turner, who told a fan his name was Stephen (as a staff member proceeded to ask him if he really just told a little kid his name was Stephen), but I didn't get Kerley in time. Fortunately, my day brightened so much more when this guy did indeed stop over... 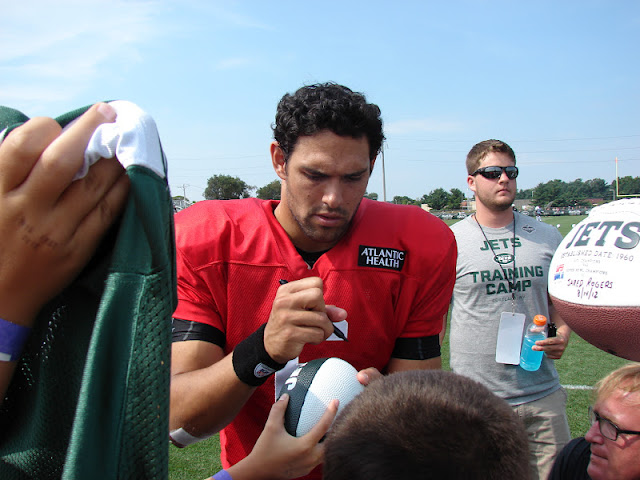 YES! The Sanchise! Way back in the day, I had bought an autographed picture of his off of eBay, and it turned out to be fake when I brought it to JSA. Now, my time had come to make up for it, so I went all out to make sure I'd get his autograph, as ugly looking as it is. And... I did! I wished him good luck on the season and he said he appreciated it. It was about all he said while he was preoccupied signing for the all of the young fans. And although I didn't get much to say to him, I won't forget it, that's for sure. 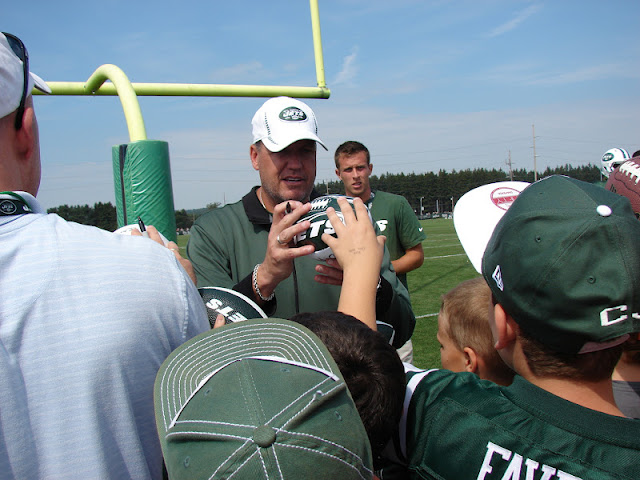 However, I was a bit too awestruck to realize that Rex Ryan was signing right beside Sanchez, and unfortunately, I missed him as well. I got his autograph through an autograph request in the mail a few years back though, so I'm not too disappointed. 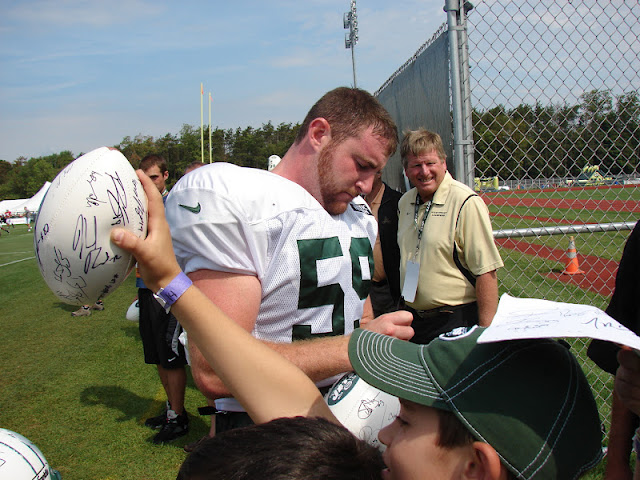 I ended up getting a very small autograph from rookie safety Derek Chard to go along with the other 7 I had at that point. I don't know a whole lot about Chard, but I wish him the best this year. 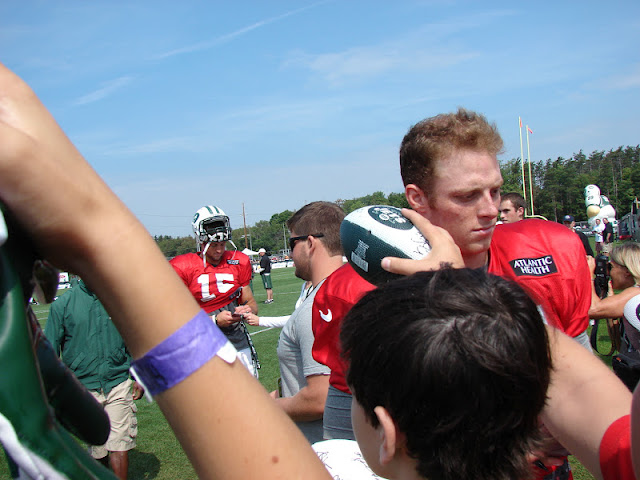 Then, third string quarterback Greg McElroy started signing. I like McElroy, but I didn't get him due to the guy behind him taking my eye much quicker. Could it be, the birthday boy himself? 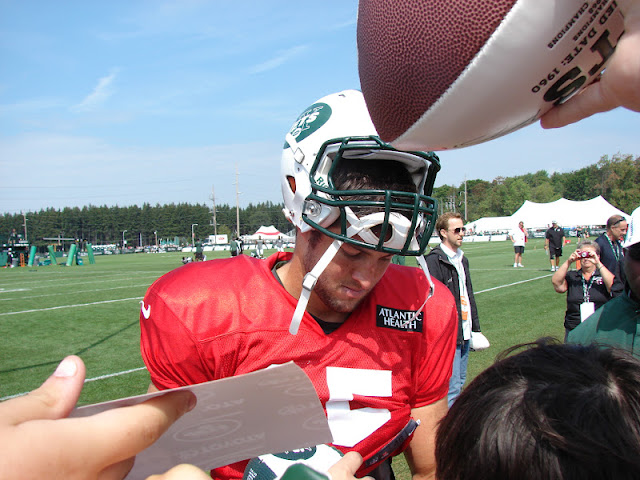 Yes, it was! And I didn't think my day could get any better after getting Sanchez! Normally, Tim Tebow isn't a common signer at these camps, but with our little crew of loud kids, we were able to hold off his 25th birthday celebration for a little bit longer as he began to sign for all of us! He eventually grabbed my football and put a very nice autograph down for me and as he handed it back to me, I wished him a Happy Birthday and he looked me directly in the eyes and said thank you. It was a really cool opportunity to meet perhaps the greatest quarterback in college football history, and despite possibly not making an enormous impact on the Jets, I'm a big fan of his. Everything about him screams class act, and it showed when he bent over to talk to a little girl suffering from severe handicaps. He signed an autograph for her and was really sweet to her, right in front of us. It's really great to see players show how genuine of human beings that they can be. I was already a Tebow fan, but with that great gesture, he may be one of my favorites in all of football now. 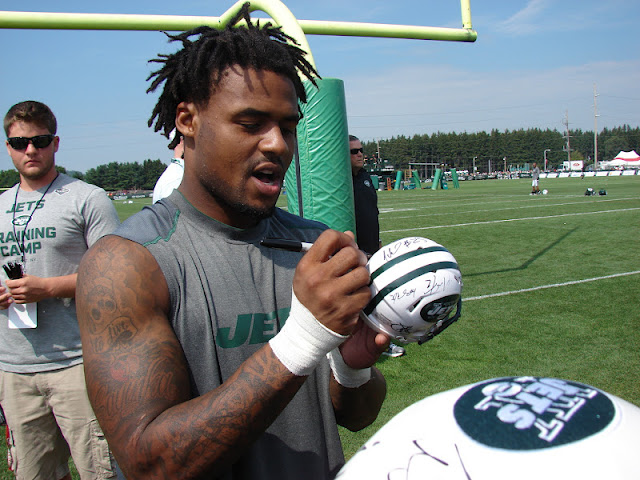 The final signer that came by was Cornerback Ellis Lankster, who is heading into his 3rd season in the NFL, after being selected in the 7th round of the 2009 NFL draft by the Buffalo Bills. He was a nice guy as well, and while he hasn't done much in the NFL thus far into his career, I wish him the best of luck with the Jets this season as well.

I went back over to meet Dad with my now pimped out football, and he looked kind of unhappy when I first made eye contact with him. But immediately he brightened up once he saw my ball and I yelled out "Tebow AND Sanchez!" to him! He, unfortunately, didn't get any autographs on the sidelines while I was doing my thing, but we both didn't care because of my success. But, I couldn't have done it without Dad getting me the purple wristband to make me an honorary kid for the day! Here's a look at my ball:
It was an unbelievable day all in all, way better than I had originally anticipated as well! Thank you so much Dad for giving me the opportunity to see the Jets practice, I had a great time! And thank you once again to everyone who signed for me; it certainly made my summer all the more special! 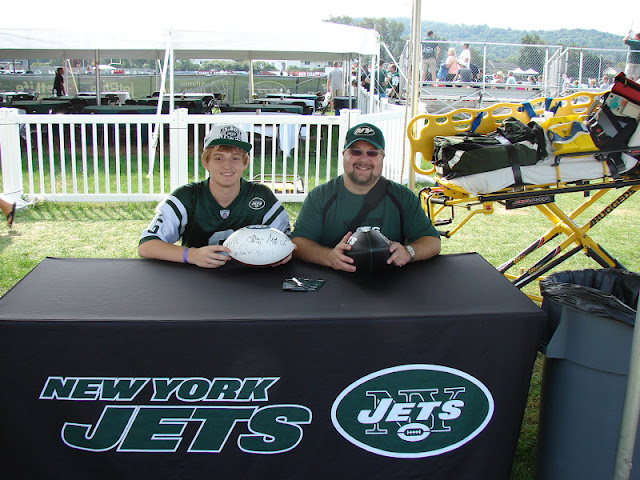