A Trip to the Yogi Berra Museum! 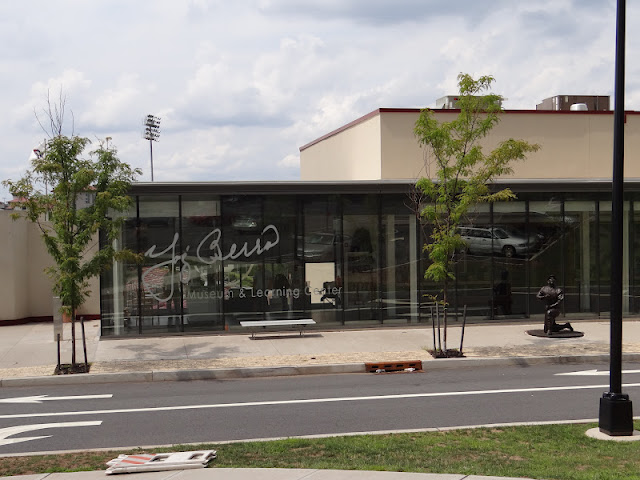 Hey guys, Drew back here! So, as I mentioned in the last post, the day following Jets camp was quite busy as well. My family went over to Hoboken, New Jersey to check out Carlos' Bake Shop, where the show "Cake Boss" is filmed. I don't really watch the show, but my sister does, and she wanted to see if she could meet anyone on the show. Sure enough, she did, and we came home with a lot of good pastries that won't last very long! But, since this is a sports blog, I'd prefer to go into what we did after visiting the bakery. 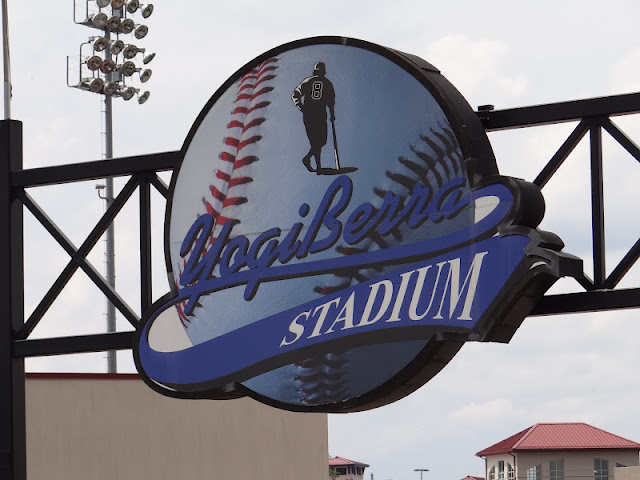 About 20 minutes out of Hoboken, on the campus of Montclair University, there stands a museum dedicated to one of the greatest baseball players of all time! In 1998, Montclair officially opened the Yogi Berra Museum & Learning Center, right next to their baseball field, which was named "Yogi Berra Stadium". Not only is it the home of the Montclair team, but the Canadien-American league New Jersey Jackals as well. Fortunately, we were able to visit the museum on our trip, and I'm going to try to take you through a bit of it. 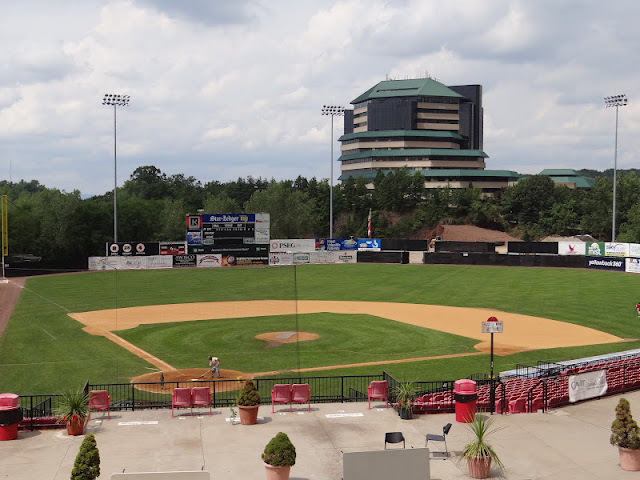 As I said, the entrance to the museum is right next to Yogi Berra Stadium, and the gate was open to the field. It was just about empty, despite a few people taking care of the field, and let me tell you, it's a beautiful park. I wouldn't have minded catching a game there, but it was a little too early for all of us to wait for one, and well, I'd be the only person interested. 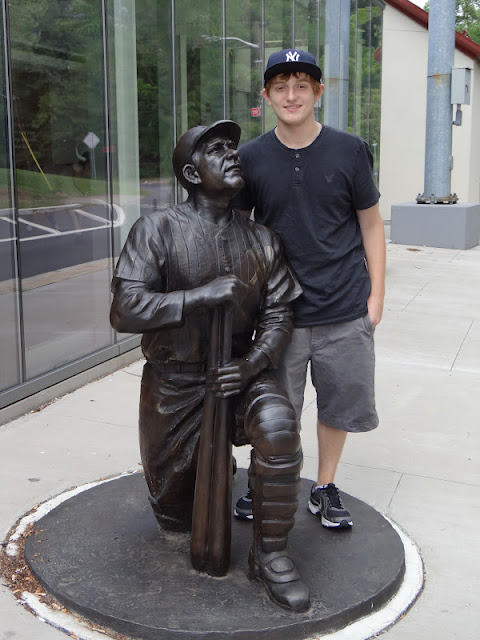 Also on the outside of the museum is this statue of Berra kneeling, with the famous #8 on the back of his Yankee jersey. To put the size into perspective, I'm 5'11, so, it's a pretty good size. 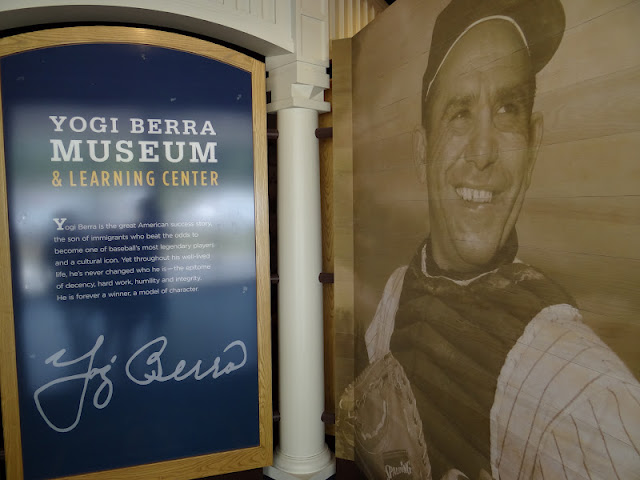 The building has a very nice lobby, which eventually leads into the actual museum. A good majority of the beginning of the exhibit had to do with Yogi's personal life with his wife Carmen and his 3 sons, including Dale Berra, who played in the Majors in the 1980's. He wasn't quite his father, but he was good enough to make the big leagues as well. 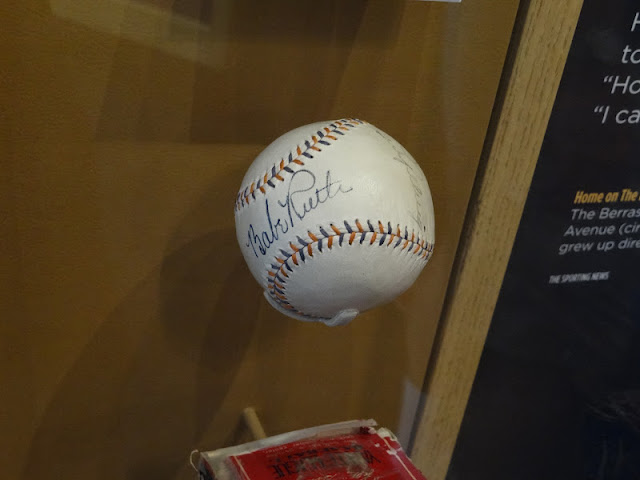 One thing you can point out immediately is that it wasn't just all about Yogi. He featured a lot of other player's autographs and memorabilia, such as Jeter, Jackie Robinson, and of course, the Bambino you see above! The signed Ruth ball is definitely one of the nicest ones I've seen, and I've seen at least 4 or 5 in person in my lifetime. 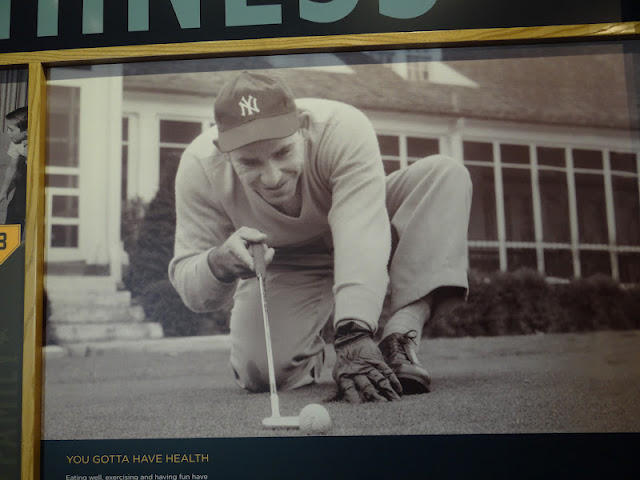 What is a museum of the most quoted baseball player ever without a little fun? There were a few TV's set up with commercials featuring Yogi and his "Yogiisms", which I found very entertaining. I don't think I have a particular favorite quote of his, but I mean, he didn't say everything he said; so that made it a bit more difficult to choose. 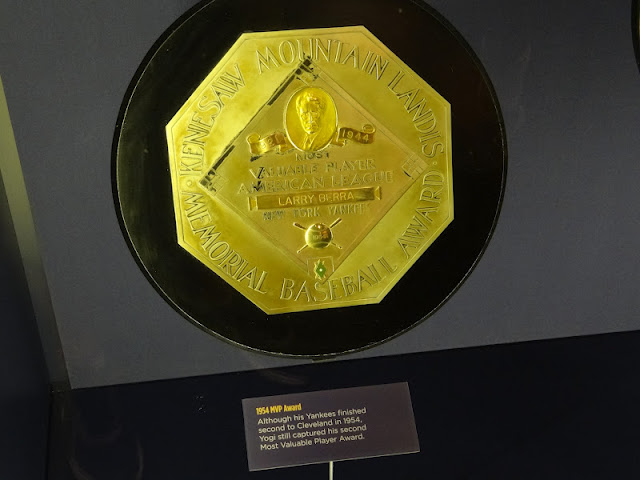 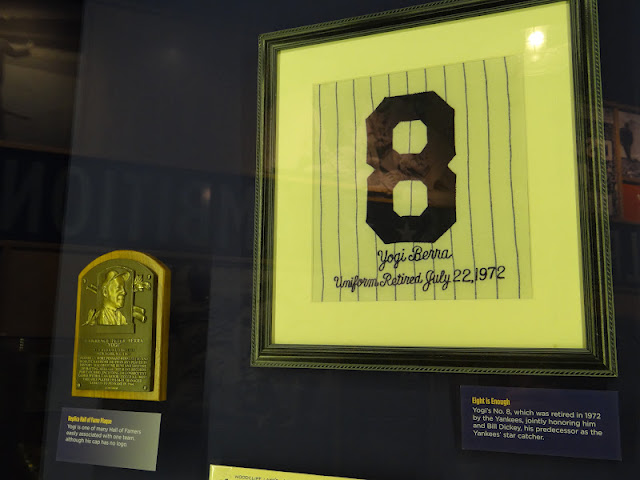 He was good enough to receive two of the biggest honors you could get in baseball, a Hall of Fame plaque and his number retired by the Yankees organization. Here are a few momentos he took home from those special events, that found their way into the museum. 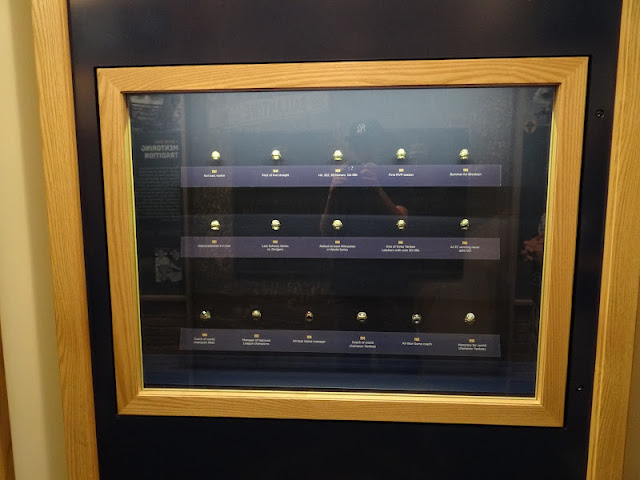 One of the biggest features of the museum was his display of World Series rings. Whether he played, coached, or was an honoree to receive a ring, he deserved every one of them, and went down as the player with the most rings in MLB history! 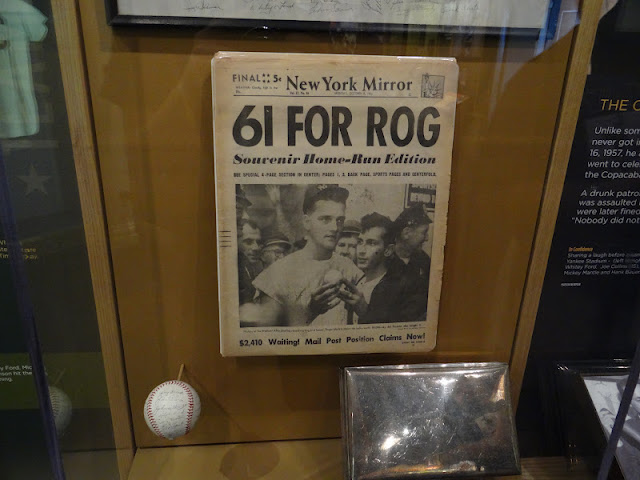 I figured it would necessary to capture the Maris newspaper photo because of how involved I've been with the 1961 Topps set over the past year or two. 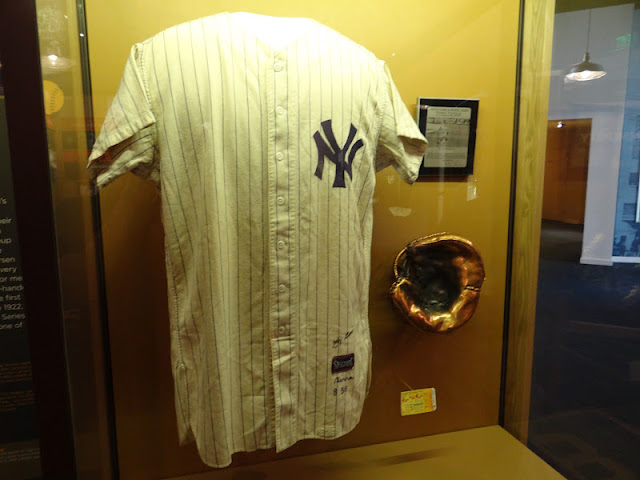 These are indeed, Berra's jersey and glove that he wore during Don Larsen's perfect game in 1956! The tour guide there told us that Berra confirmed the right glove is indeed here, not in Cooperstown, and boy was it nice! Apparently they have the jersey on a loan as of now, because it was recently bought for $600,000! The Larsen jersey is currently in an auction now, and people expect it to sell for over $1,000,000! 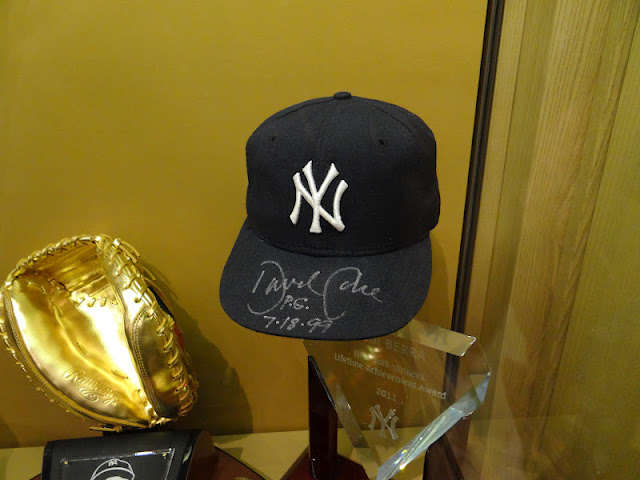 Speaking of Perfect Games, here is the hat David Cone wore during his special game, signed and inscribed with the date. Of course, the special thing about Cone's perfect game was that it was on Yogi Berra Day at Yankee Stadium, which made the perfect game turn into an odd but incredible coincidence! 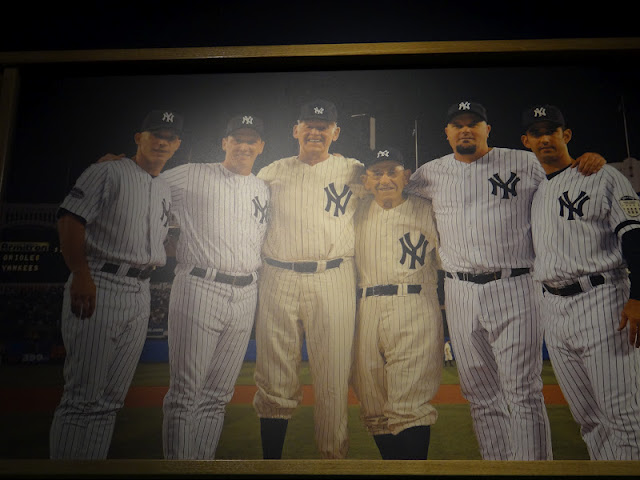 This picture will most likely end up being the most perfect picture of all time (pun intended). It is all 3 battery mates from the Yankees Perfect Games: Larsen/Berra, Wells/Posada, and Cone/Girardi! Not only that, but everyone is in uniform, and I believe it was taken at the 2008 All Star Game if I'm not mistaken. That would be a cool picture to have signed. 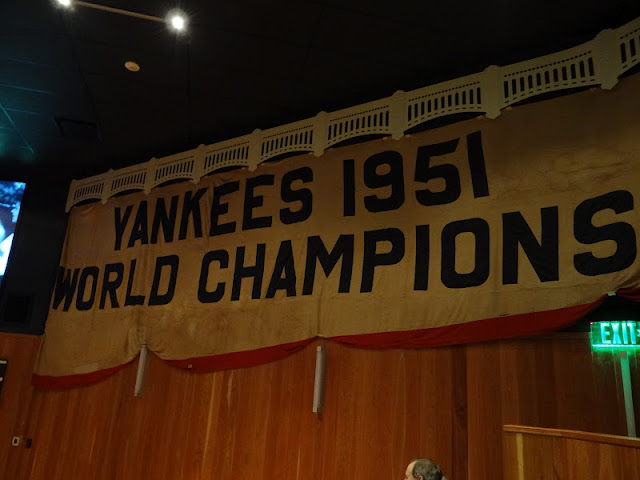 After Yogi's firing as manager of the Yankees, he swore he'd never step foot in Yankee Stadium again. That is, until George Steinbrenner came to this museum and met up with Yogi to publicly apologize. As part of a welcome back present, Steinbrenner gave Yogi the 1951 World Series banner that used to fly in the old stadium. Here it is, now as part of the theater room, which was used to showcase rare Yankees footage, including of Babe Ruth. 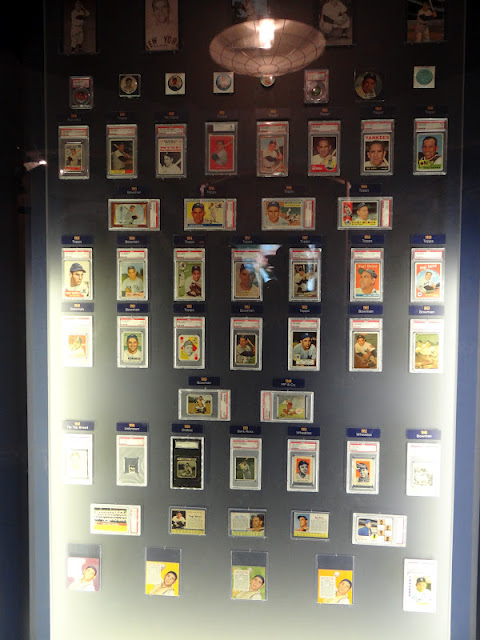 And for my card collecting readers out there, I didn't forget about you! One wall in the exhibit featured cards of Berra from all of the major issues during his career. I had 5 of the cards, and if it weren't for the binder Dad got from a yard sale a year ago, I'd have none. 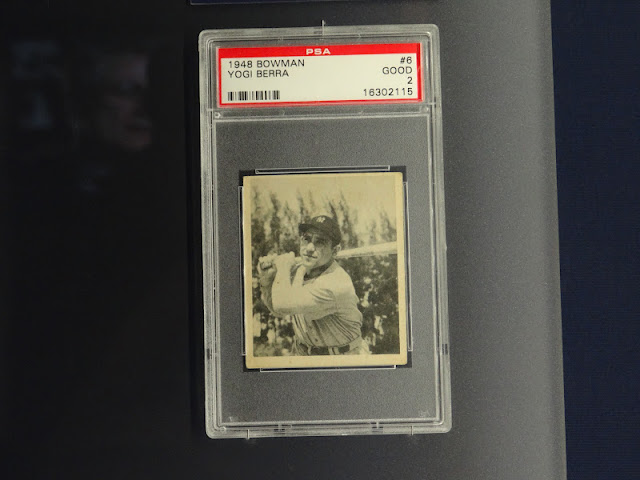 One day, his 1948 Bowman rookie card will be mine. Just saying. 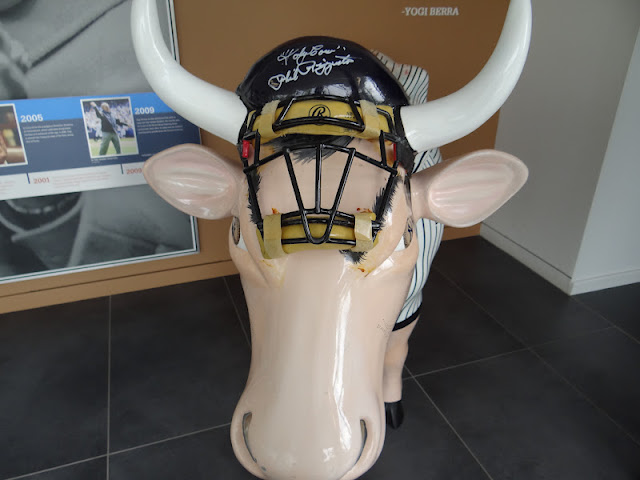 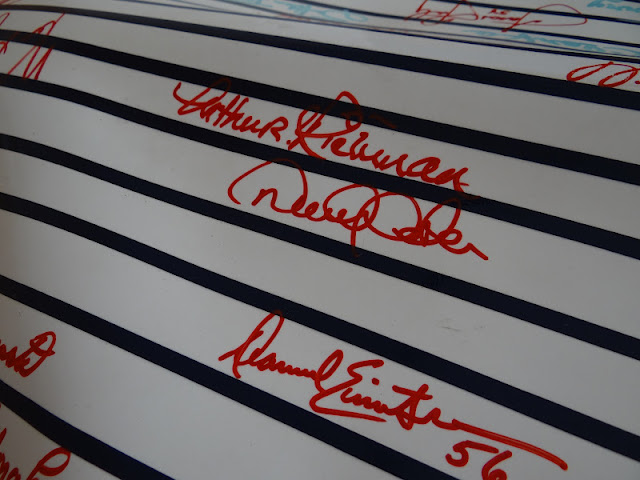 Finally, as we exited the museum and headed back into the lobby, we were greeted by a giant cow, signed by hundreds of Yankees players, including Jeter above. I didn't quite get the reference somehow, until I saw Rizzuto's signature with the "Holy Cow" inscription right above the horns. 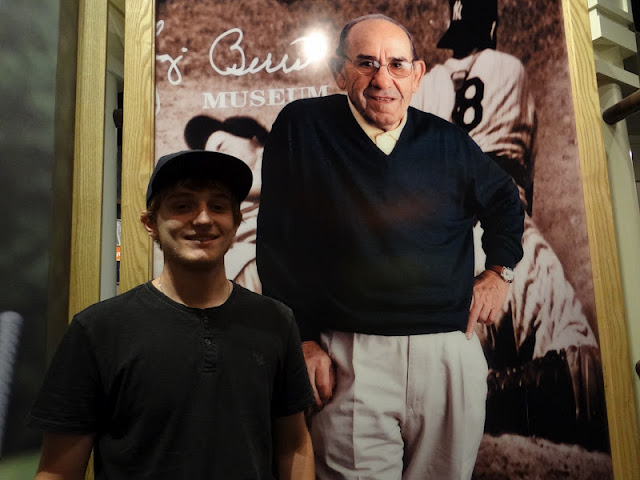 Unfortunately, Yogi wasn't there the day we went, so this will have to be the closest I'll get to a picture with him for now. I downloaded a Bucket List app today for my iPod, and one of the first things I added was to meet Yogi Berra and shake his hand. Hopefully it can come true one day. As for the museum, well, my whole family, including my sister enjoyed it, which really meant it was good! It was a great experience and I highly recommend it to anyone in the area that hasn't gotten to check it out yet!