Hey guys, Drew back here! Now that the first half of the school year is in the rear view mirror, I can finally get back to this stuff for a few months without an extreme amount of stress. My desk is cluttered with cards and I need to get some packages out, so I better get to work! Let us now continue the card show review series, with part 5. Check it out:


PART 5: Experiences with Baseball Stars!
(Past and Present!)

This had actually been the first time ever that we planned on meeting every one of the signers attending the show!  Along with a free player, we met pretty much a player from the past, of recent, and of the future! I guess in order to do this in the correct order we are going to need to work our way back in time! 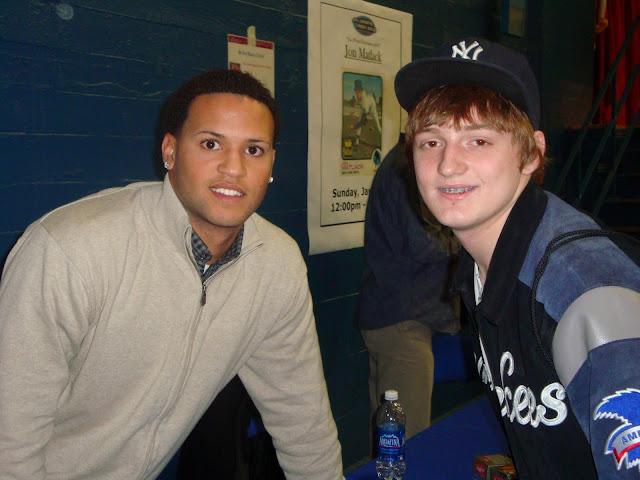 The first player I met is a current Yankees prospect, center fielder Mason Williams! Mason is the 5th ranked prospect in the Yankees organization according to Baseball America, and he seems to have an awful lot of potential! They say he is the best defensive outfield prospect they've had in a while, and he is projected in their 2015 lineup. I've never met a younger player than him; at only 20 years old. He seriously looked like he could be a big time player in MY league right now. He was very nice, yet shy, but I could only imagine how honored he felt to sign autographs for money before he even made it big! I wished him the best of luck, and that I hope he would help bring home a World Series championship, and he really seemed to appreciate the support. 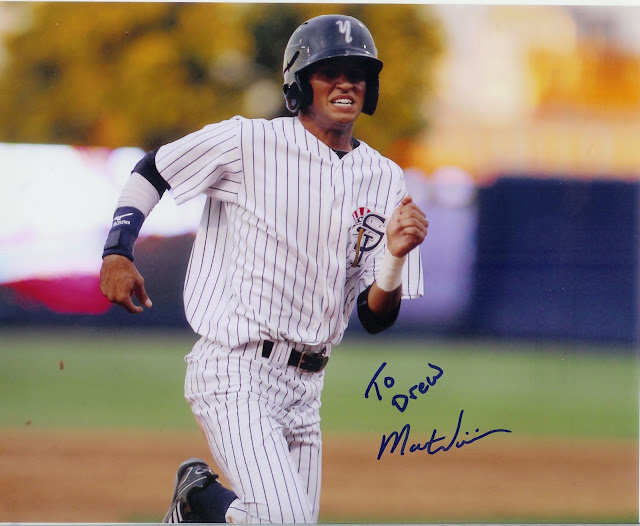 Mason signed this 8x10 out "To Drew", and it came out pretty sharp! The funny thing is, he was a very good player on the Staten Island Yankees, who I've seen play my local Hudson Valley Renegades too many times to count. I'm almost positive I attended a game between the two last season, so I possibly got to see him. I'll have to look back and check. His stats for Staten Island were impressive: .349 batting average with 94 hits in only 68 games! Maybe he'll keep up those stats all the way to the big time! 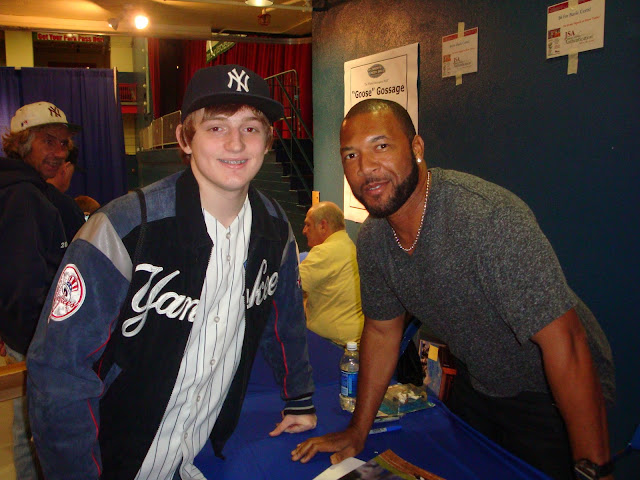 Next up was one of my personal favorite Yankees I ever got to watch, Gary Sheffield! You know, over the years, I've been fortunate enough to meet some great players that have came through the majors. However, I never felt as much of a personal connection to any of these players as I did with Sheff. Yeah, he's not necessarily a fan favorite, although fans loved seeing his crazy foul ball swings that could kill a person, but it felt really cool to get a chance to meet someone I watched when I just started getting into baseball. I still find it bizarre that he got to 500 home runs, and I doubt he'll make the Hall of Fame due to his steroid admission a while back, but nevertheless, he was my favorite player in about 2005/06, and I'll always remember wearing my Sheffield jersey to Yankee games. It was a special moment, for sure. 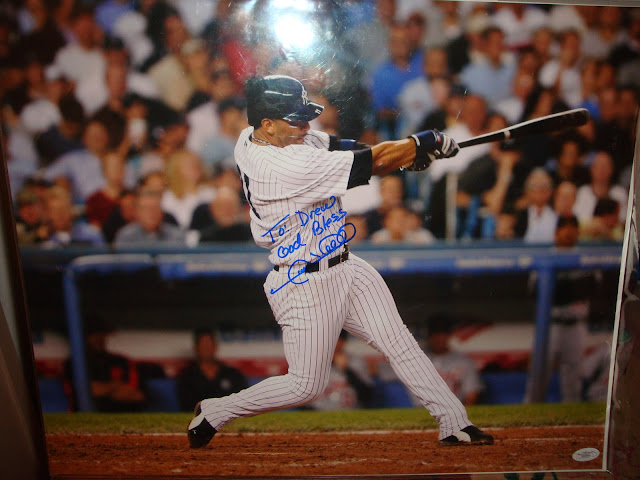 As excited as I was to meet Gary, I had no clue what I wanted to get signed by him. I figured I'd do something awesome like a photo for example, but the 8x10's the dealers had to offer really weren't my favorites by any means. Just when I began to get desperate, I spotted out the 16x20 photo above, and immediately fell in love. It wasn't cheap, but I didn't care, because as soon as I saw it I knew it was what I wanted. He signed it perfectly, "To Drew, God Bless, Gary Sheffield", with his very slick autograph to cap it off. I got it authenticated by JSA and was extremely pleased with how the piece came out. Without a doubt it's going up on the wall after we re-paint my room soon! 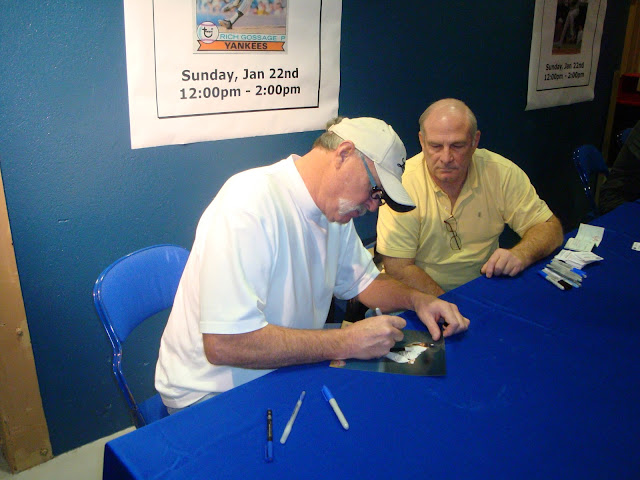 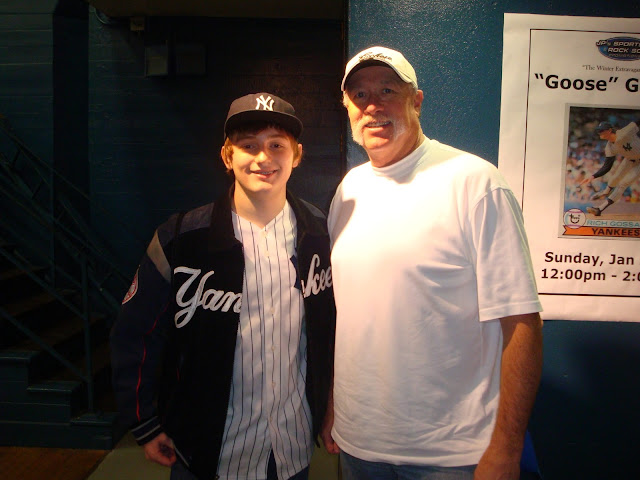 I doubt many people even need me to say who the next person I met was. I mean, the mustache pretty much gives it away (and his name is right behind him in the picture)! It's none other than Yankees Hall of Fame reliever Rich "Goose" Gossage! I always admired Goose from all of the Yankees highlight footage from the 1970's and 80's, because he seemed fearless and confident in his ability! I've been able to already add quite a few cards and autographs of his over the years, so I wasn't sure what I wanted to get signed next. Then I realized that I still needed him for my "Hall of Fame Heroes" custom set! Sure enough, that is what I got signed, and it came out awesome! 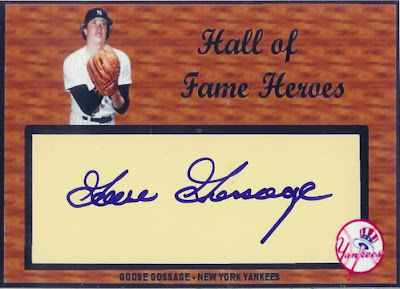 Goose's signature will never ever disappoint, as it has to be one of the nicer ones in the Hall of Fame! One thing I regretted was, although he did charge for inscriptions, he asked me if I just wanted the autograph or if I wanted anything else, and I just said the autograph, being the truthful person I am. Now, I want to smack myself for not getting the HOF inscription, but eh, I'll be okay in the long run. It still looks sweet! It was certainly a fun experience getting to meet him, especially since Dad talked hunting with him for a little while. Goose told me I should get into it because it's a lot of fun, and he told us about how he always loves to hunt with his sons. He was a genuinely nice guy, and I was thrilled to have the chance to meet him! 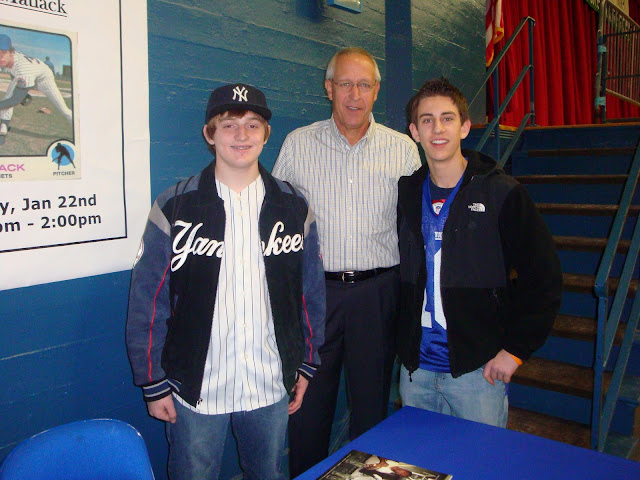 The final player Mike and I got to meet on this already amazing day was former Mets pitcher and 1973 NL Rookie of the Year, Jon Matlack! Matlack was the free signer for the day, and even though he was a Met, I figured it's never a dumb idea to add another former ROY winner to the collection! He actually was a very solid pitcher in the 70's, although he finished his career one game below .500, at 125-126. One other pretty cool accomplishment of his was that his performance in the 1975 All Star Game was good enough that he shared the All Star MVP with another player I've met, former Pirate Bill Madlock! The last fun fact I have to share about Matlack was that he gave up Roberto Clemente's 3000th, and tragically, final hit. 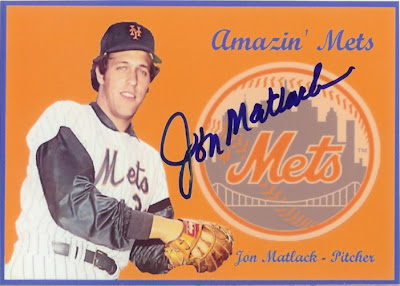 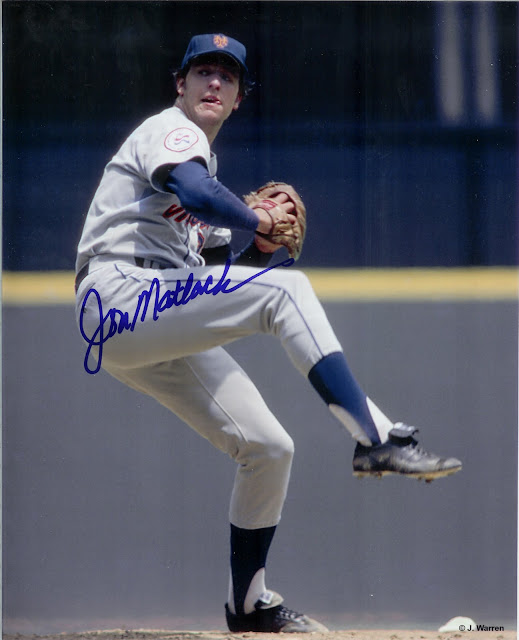 I was able to print off 2 customs I made of his the night before the show, one for each of us, Mike and I. They both turned out awesome in my opinion, because as much as I can't stand most of the Mets, I will have to admit their colors are pretty sweet! Dad was able to get an 8x10 signed as well, since we all were eligible for 1 free autograph a person. He figured why not have it, because it would be a wasted opportunity not to. It looks pretty sharp, and while I definitely won't be hanging it up in the near (or distant for that matter) future, I'm glad to have it!

All in all, the day couldn't have gone any more perfect... or could it? I guess you'll have to wait and see!