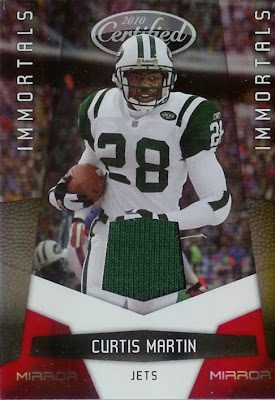 Hey guys, Drew back here. Today was the announcement of the 2012 Pro Football Hall of Fame induction class, and I was extremely pleased to see one of my all time favorite football players get a well deserved honor, in former Jets running back Curtis Martin. This is the first time that somebody I got to watch play quite often has been elected into any Hall of Fame, for that matter. I know it will be the first of many, but it is going to be truly special to watch Curtis officially become one of football's elite.

I began watching sports in 2004, starting in the fall when the Jets were contending in the playoffs. Unfortunately, the one highlight I remember most was Doug Brien missing a field goal that would have brought them into the AFC Championship game, and going on to lose to the young Ben Roethlisberger and his Steelers team. Somehow, as crushed as I was from that game, I continued to watch sports more and more. I guess it was love at first sight! Another part of that season I remember was when Curtis Martin won the rushing title over Shaun Alexander by a mere yard. So, to say Curtis Martin helped me grow interest in sports in general is a very fair statement.

Now, over 7 years later, I sit home all day writing about sports and collecting cards and memorabilia. Seeing the headline "Curtis Martin leads 6 HOF Enshrinees" on ESPN.com made me revert back to those days, before the collection, before the hobby entered my mind, and way before this blog was started.

Martin only played for 3 seasons during my football interest "era", but he to this day is one of my favorite players of all time. It's cool to think that I was able to see a Hall of Famer play in person, even though I know I've seen more future Hall of Famers play that just haven't been eligible for induction yet. I'm sure a majority of you all have seen players like this in your life, but I'll never forget the memories Curtis Martin left behind, and what he's helped me grow to love.

Thank you Curtis, and again, a huge congratulations on becoming a member of the Pro Football Hall of Fame!