Hey guys, Drew back here. Until this year, I've never really been a basketball fan, but I would watch it here and there. I got the privilege a few years ago to play on an NBA Court (Continental Airlines Arena), and I'll never forget making a 3 pointer on that court. I've bounced back and forth over the years as a Knicks and Nets fan, depending on how they were doing, but this year I decided to become a permanent Knicks fan. It's nothing against the Nets, but I love their current team, although they've struggled quite a bit. One of my favorite current Knicks is the one I just happened to pick up an autograph of recently. Take a look: 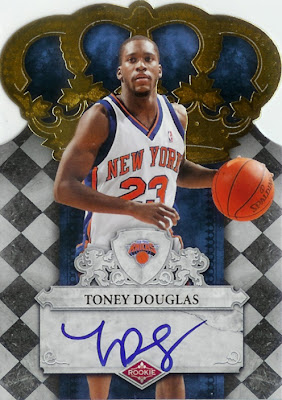 Out of the 2009-10 Panini Crown Royale product, here is a sweet di-cut rookie auto of guard Toney Douglas numbered out of 699! Douglas may not be Carmelo Anthony or Amare Stoudemire, but I think he's going to be a very solid player for a while. This season he's averaging a little over 8 points a game, and he's just a solid team player overall. I really like the design of this card, and I'm glad I stumbled upon it on eBay a while ago. Hopefully I'll be able to pick up a few more Knicks autographs for my collection (maybe Jeremy Lin next, after his performance last night!), and maybe they can be somewhat of a contender by the end of the season. I know I'll be watching!
Speaking of what I'll be watching, as a Jets fan, tonight will be a difficult night. However, I'm going all out for the Giants to beat New England in the Super Bowl, because there is no team in football I hate more than New England! Let's Go Giants!
See Ya!
Posted by Drew at 1:36 PM