Hey guys, Drew back here. I have no idea why, but I've had these stacks of cards sitting around for an awful long time, and it's about time I got to posting them. About two months ago, Dad showed up for work early on a Monday morning to find a few binder pages filled with cards that were supposedly for me. Dad brought them home to me and I was shocked, and although he had no clue who gave them to me, he thought it was awesome. He found out the next day that the cards were from his friend Tim. I recognized the name because I remember giving him a tour of my collection one time when he was over our house. Apparently he had no need for these, and he decided I would make use of them more, which was really nice of him! A few weeks later, a different work friend of his, Johnny T.,  also gave him some stuff to give to me, which was equally awesome as well! We'll start with what came from Johnny! 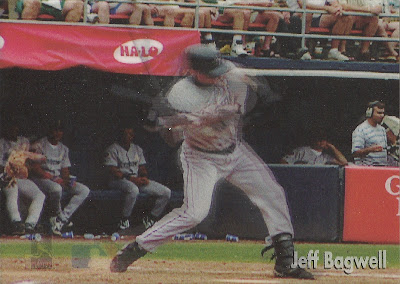 First was this cool "Sport Flix"-type photo of Jeff Bagwell! I hardly have anything of Bagwell in my collection, but I guess this would be a pretty good place to start! I feel like he should have gotten into the Hall of Fame this year, because the steroid rumors are ridiculous when it comes to his case. His name was hardly ever mentioned when steroids came up, and he was one of the more talented players in baseball during the time. I predict he'll go in next year with Craig Biggio, which would be awesome to see.

Also, he gave me this Alfonso Soriano key chain. Boy has Alfonso been forgotten since his tenure with the Cubs began. He's had a very good career without a doubt, and I wish I could've seen more of his best years with the Yankees. Once he was traded for Alex Rodriguez his career went downhill after a few more big years, and now Chicago wished they never signed him to that contract in the first place. This is a pretty cool piece, and I might just keep it unopened because I don't have a whole lot of things that have keychain hooks.
Thanks a lot for the stuff Johnny, I really appreciate it! Moving on to the few binder pages I received from Tim, take a look: 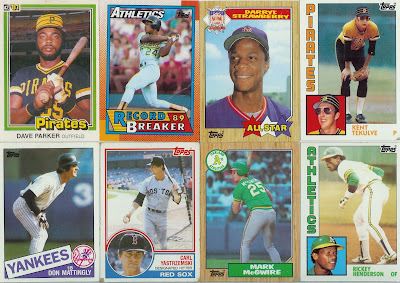 We start with some of the better names of the 1980's, such as Rickey Henderson; Don Mattingly; and Darryl Strawberry. Throw in a Dave Parker, Yaz, and a Mark McGwire rookie card and you have me interested! Here and there I find it cool to add some of the 80's cards, but in bulk, no thank you. 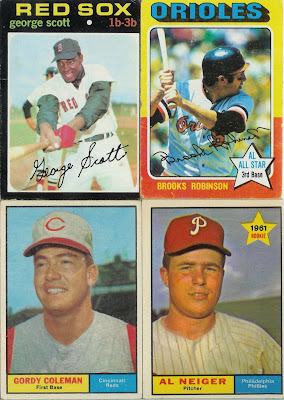 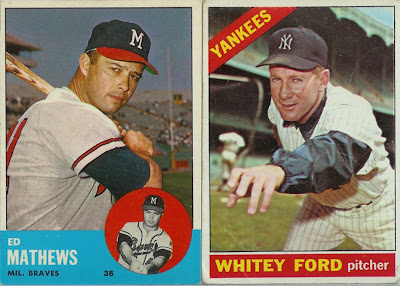 I'm sure you were wondering what other 1960's cards were included in the binder pages, and well, I was in shock when I saw them! None other than a 1963 Topps Eddie Mathews and a 1966 Topps Whitey Ford! I went crazy when I noticed them hidden beneath a few pages of 1980's goodness! Anytime I am able to add two vintage Hall of Fame cards for no price at all is a great, great thing! As a telemarketer would say though, "But wait, there's more!" 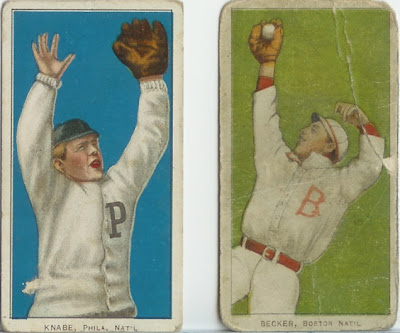 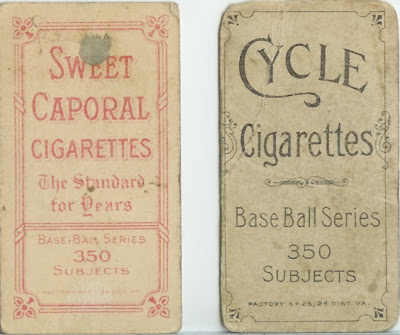 ..... Woah. Tim, if you're reading this, I want to tell you that you went way too far with these inclusions! These two Cigarette cards are absolutely beyond awesome, and I honestly don't know what else to say other than thank you so much! Given they are legitimately from the tobacco era (which I'm 99.9% sure they are), they are now the oldest cards in my collection and perhaps the coolest ones also! They are both from the 1909 T206 card set, which is now 103 years old, which explains the extreme amount of wear on the two cards. They don't sell for a ton in rough shape, but I would buy them in rough condition just because of how awesome they are.
Otto Knabe was born in 1884 and began his career in 1905 with the Pittsburgh Pirates. He was a decent player through most of his career, succeeding most in his 7 year tenure with the Philadelphia Phillies. He has maintained his team record of 216 sacrifice hits to this day, which is absolutely insane, although it isn't necessarily a key statistic. He also managed the Baltimore Terrapins for two seasons (1915-1916) before his retirement, and eventual death in 1961. The back of his card reads "Sweet Caporal Cigarettes, The Stamdard for Years" followed by "Baseball Series 350 Subjects", and the bottom is very difficult to read. It's in much better shape than the other card, and I love the artwork on the front of the card. It really goes to show how well history has evolved over the years in baseball.
David Beals Becker, known better as Beals Becker, was born in El Dorado, Kansas, all the way back in 1886. He was part of the Bugle Corps at the Wentworth Military Academy, while starring in all three major sports and eventually winning the Wentworth's Champion Athlete Award in 1903. He turned out to be a fairly solid power hitter for 5 teams throughout his career, which ended following the 1915 season. He retired with 45 career home runs, having been in the top 10 in the NL Home Run leader list 4 times! Of course, he played during an era in which not many balls left the yard, until Ruth came about, but nonetheless he was a very good player. He became the first player with multiple pinch hit home runs in the same season, and also set a record for 2 inside the park home runs in one game! He passed away in 1943, at the age of 57. His card is the Cycle variation, which Topps did a great job of using back in 2009 when they did a remake of the T206 set.
Overall, again, thank you so much to both Johnny and Tim for the amazing cards and pieces to add to the collection! I really do appreciate it, especially those tobacco cards. They're in good hands, without a doubt.
See Ya!
Posted by Drew at 4:42 PM