A Golden Ball of a Gold Glover

Hey everyone, Drew back here! It already feels like the summer is beginning to wind down, but I'm far from ready for it to end. Unfortunately, I will not be flying to Chicago this weekend for the National, but I do plan on attending the East Coast National, hosted by JP's Sports, for the 7th straight year! They always make their lineup especially solid for their summer show, and I'm looking forward to getting three more Hall of Fame autographs in my collection that day.

One of the players I planned to have sign a baseball for me was Brooks Robinson. Brooks is William's favorite player from everything I've gathered, and he seems like such like a wonderful man (not to mention one hell of a third baseman). My dad decided for my birthday to find something to spoil me with, and with his gift, I will have to find something creative for the Human Vacuum Cleaner to sign (perhaps a vacuum?). 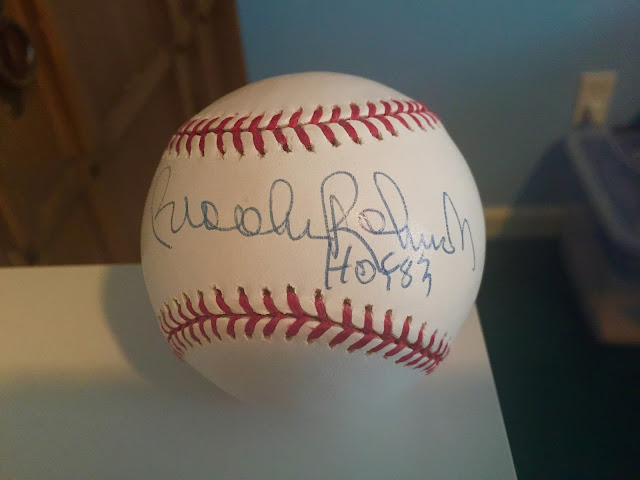 Yeah, that's right. For all of $25, my dad got me this awesome Tristar certified Brooks Robinson signed baseball; HOF Inscription and all! I researched the certification, which said that the ball was signed at a Houston card show in 1992; so it has a little bit of wear to it, but still looks great considering it's older than me! Robinson has one of the best signatures I've seen, especially among the Hall of Fame, and I've been wanting to get him on a ball for what feels like forever. He is now in my Hall of Fame ball case I got last Christmas, and after the card show I will have officially filled the case with nothing but Cooperstown's best.

Thank you so much Dad for the great surprise! Now, I ask you, the audience: what should I have Brooks sign for me at the show? I was debating between a bat or his famous World Series dive photo. Let me know in the comments below!