Hey guys, Drew back here! It sure has been a while since I've posted anything relevant to my collection, but I've really been busy trying to make the best of my senior year of high school. I finally see what is so enjoyable about high school, and unfortunately that has a lot to do with the recent decline of this blog. However, I still have been fairly active in the hobby, and I'd like to show off my TTM successes I've received since the middle of October. Enjoy! 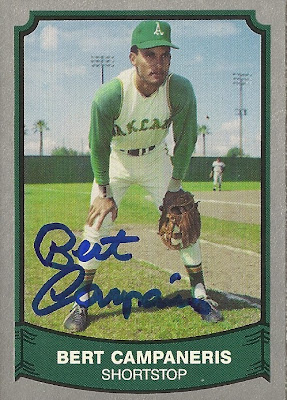 Campaneris is the newest autograph addition to my 1988 Pacific Legends mini set! "Campy" was a 6 time All Star and was known for being a speedy, versatile all around athlete. He was a key part of Oakland's dynasty in the 1970's, leading off and acting as a spark plug for the 1972, '73, and '74 champion Athletics teams! His 649 stolen bases rank him 14th all time in steals, and as a fun fact: Campaneris was the first player to play all 9 positions in a single game. On September 8th, 1965, he did it all, even including pitching with both hands depending on the handedness of the batter. He isn't of Hall of Fame caliber, but if there were a Hall of Very Good, he'd receive a lot of recognition! 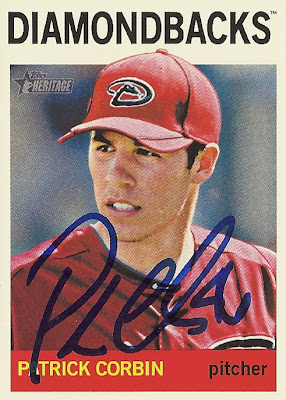 Patrick Corbin had a breakout season in 2013 for the Arizona Diamondbacks, and he was named an All Star for the first time in his very young career. At the All Star break, he was 11-1 with a 2.35 ERA, and although his second half wasn't as dominant, he completed his first full season with a 14-8 record and a 3.41 ERA. I was really happy to see this one come back, as he nicely signed and inscribed his #46 on a 2013 Topps Heritage! 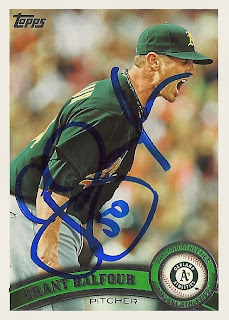 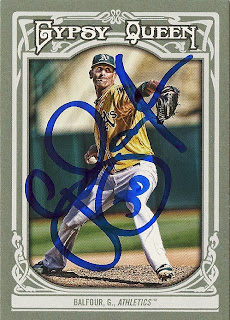 Grant Balfour became one of my favorite relievers in baseball this past season, as he simply dominated for my fantasy team. Known to show off his "Balfour Rage", Grant is one of the top remaining closers on the free agent market right now and I wouldn't mind seeing the Yankees add him to their arsenal. I don't think David Robertson is a bonified closer, but I can see him continuing to set up and eventually pass the ball on to this guy to finish off opponents. He was named an All Star for the first time in his career this year, and he set the Oakland record for consecutive saves, more than Hall of Famers Dennis Eckersley and Rollie Fingers. He signed both cards I sent him beautifully and bold in blue sharpie, and I couldn't be more pleased with this return. 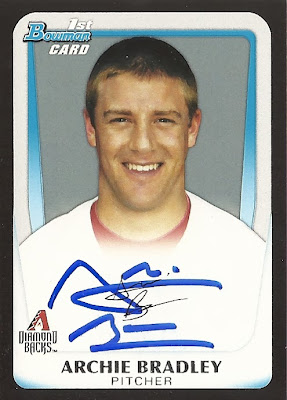 I didn't see this one coming at all when I got it back about a week ago. Archie Bradley is one of the game's top pitching prospects, and is living up to the expectations he had been given after being drafted 7th overall in 2011. He went 12-5 with a 1.97 ERA in 21 starts for Arizona's AA squad, and is now considered the top prospect in a highly touted Arizona farm system! He signed his Bowman card for me, and hopefully I'll be a lucky man to have this when he makes his mark on baseball! 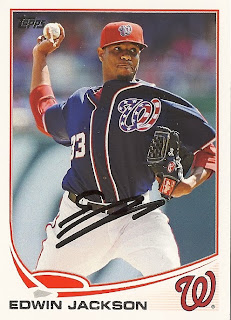 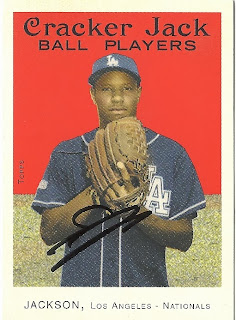 Edwin Jackson has been an erratic pitcher throughout his career, but he has shown flashes of brilliance on the mound in his past and for what reason I'm glad to see the cards above back in my possession now bearing his autograph. He has a sloppy autograph, but it sort of fits his career. He's pitched for 8 teams in 11 years and now is under contract with the Cubs, for whom he went 8-18 with last year with an ERA upwards of 5. He's been inconsistent, sure, but he's shown that he has a higher ceiling he could never really maintain. He threw a no hitter against the Rays in 2009, but walked 8 batters in the game, therefore not making it as impressive as it could've been. Either way, I'm still excited to have these back!

Well I hope you all enjoyed what I had to show off, because that's all for now. Until next time, see ya!
Posted by Drew at 10:16 AM